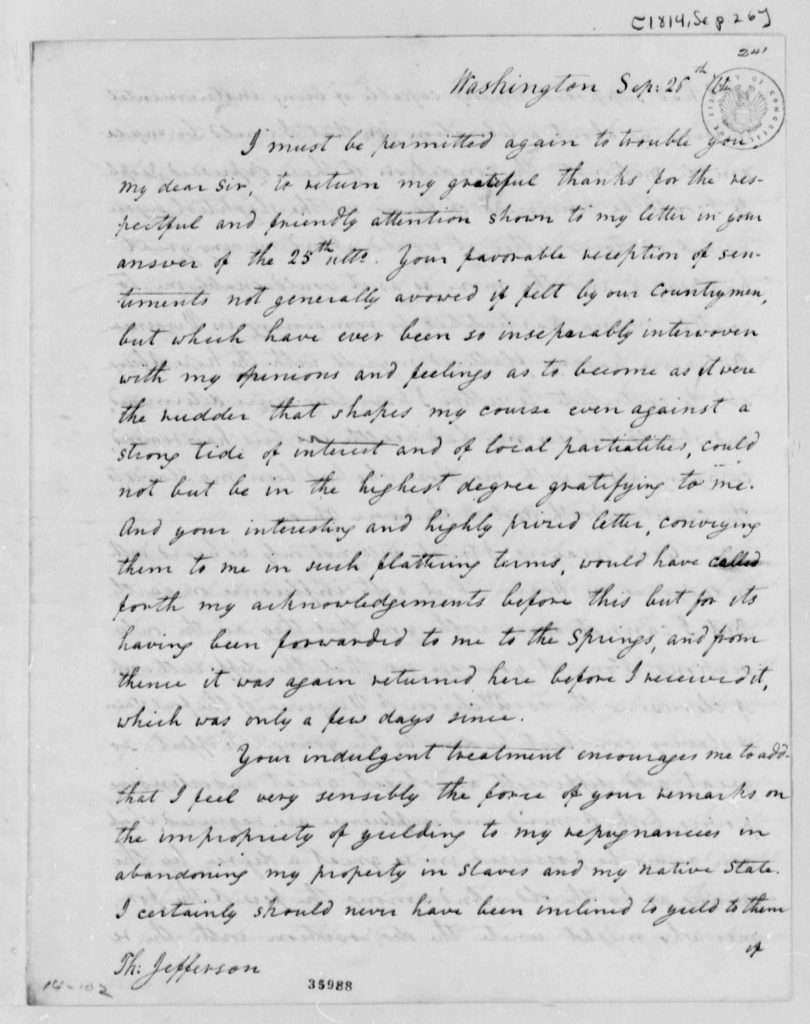 I must be permitted again to trouble you, my dear Sir, to return my grateful thanks for the respectful and friendly attention shown to my letter in your answer of the 25th ulto. Your favorable reception of sentiments not generally avowed if felt by our Countrymen, but which have ever been so inseparably interwoven with my opinions and feelings as to become as it were the rudder that shapes my course even against a strong tide of interest and of local partialities, could not but be in the highest degree gratifying to me. And your interesting and highly prized letter, conveying them to me in such flattering terms, would have been called forth my acknowledgments before this but for its having been forwarded to me to the Springs, and from thence it was again returned here before I received it, which was only a few days since.

Your indulgent treatment encourages me to add—that I feel very sensibly the force of your remarks on the impropriety of yielding to my repugnancies in abandoning my property in Slaves and my native State. I certainly should never have been inclined to yield to them 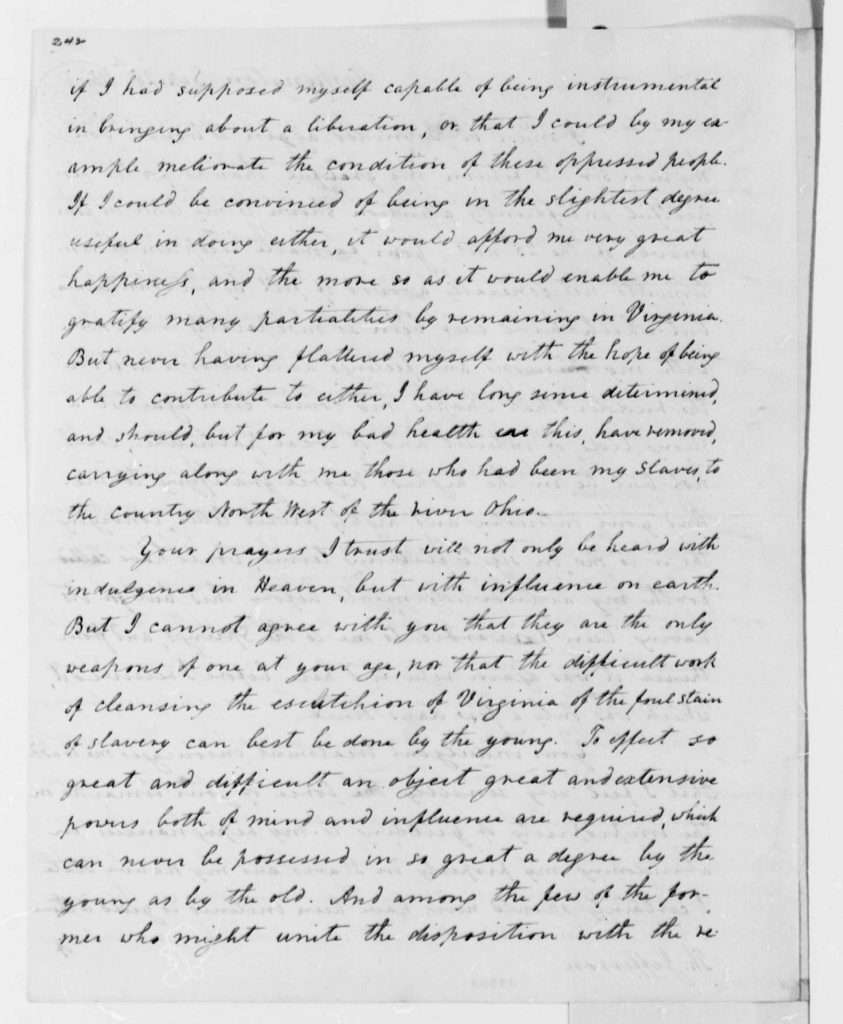 if I had supposed myself capable of being instrumental in bringing about a liberation, or that I could by my example meliorate the condition of these oppressed people. If I could be convinced of being in the slightest degree useful in doing either, it would afford me very great happiness, and the more so as it would enable me to gratify many partialities by remaining in Virginia. But never having flattered myself with the hope of being able to contribute to either, I have long since determined, and should, but for my bad health ere this, have removed, carrying along with me those who had been my Slaves, to the Country North West of the river Ohio.

Your prayers I trust will not only be heard with indulgence in Heaven, but with influence on earth. But I cannot agree with you that they are the only weapons of one at your age, nor that the difficult work of cleansing the escutchion of Virginia of the foul stain of slavery can best be done by the young. To effect so great and difficult an object great and extensive powers both of mind and influence are required, which can never be possessed in so great a degree by the young as by the old. And among the few of the former who might unite the disposition with the re- 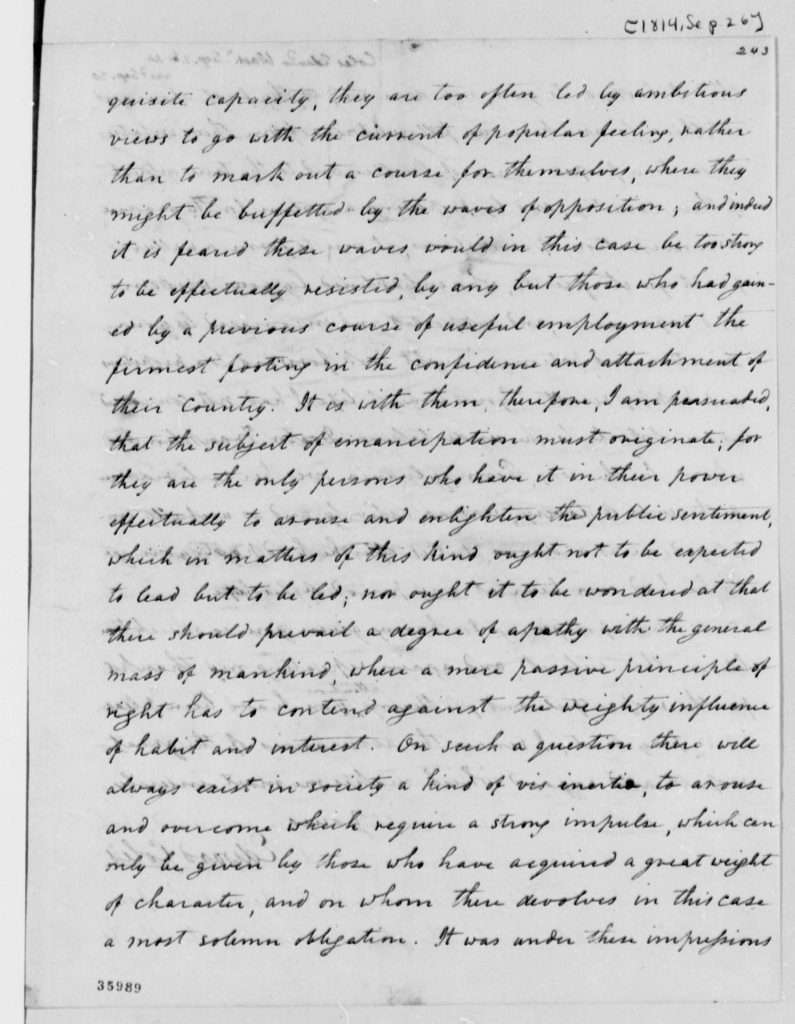 quisite capacity, they are too often led by ambitious views to go with the current of popular feeing, rather than to mark out a course for themselves, where they might be buffetted by the waves of opposition; and indeed it is feared these waves would in this case be too strong to be effectually resisted, by any but those who had gained by a previous course of useful employment the firmest footing in the confidence and attachment of their Country. It is with them, therefore, I am persuaded, that the subject of emancipation must originate; for they are the only persons who have it in their power effectually to arouse and enlighten the public sentiment, which in matters of this kind ought not to be expected to lead but to be led; nor ought it to be wondered at that there should prevail a degree of apathy with the general mass of mankind, where a mere passive principle of right has to contend against the weighty influence of habit and interest. On such a question there will always exist in society a kind of vis inertia, to arouse and overcome which require a strong impulse, which can only be given by those who have acquired a great weight of character, and on whom there devolves in this case a most solemn obligation. It was under these impressions 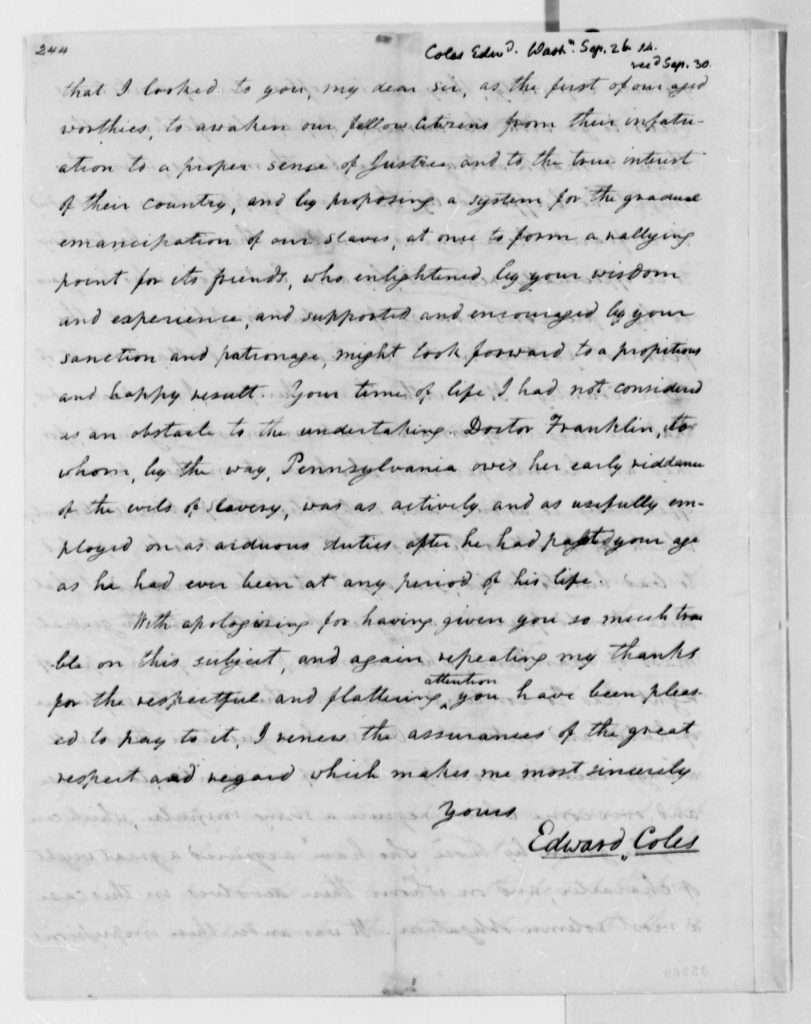 that I looked to you, my dear sir, as the first of our aged worthies, to awaken our fellow Citizens from their infatuation to a proper sense of Justice and to the true interest of their country, and by proposing a system for the gradual emancipation of our Slaves, at once to form a rallying point for its friends, who enlightened by your wisdom and experience, and supported and encouraged by your sanction and patronage, might look forward to a propitious and happy result. Your time of life I had not considered as an obstacle to the undertaking. Doctor Franklin, to whom, by the way, Pennsylvania owes her early riddance of the evils of Slavery, was as actively and as usefully employed on as arduous duties after he had past your age as he had ever been at any period of his life.

With apologizing for having give you so much trouble on this subject, and again repeating my thanks for the respectful and flattering attention you have been pleased to pay to it, I renew the assurances of the great respect and regard which makes me most sincerely