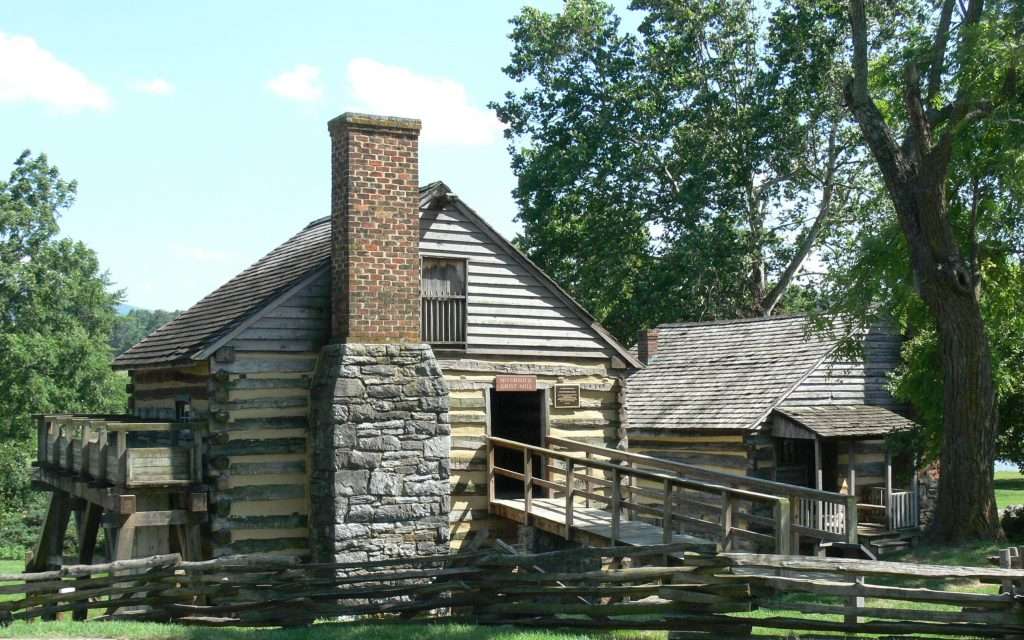 McCormick was born on February 8, 1819, at Walnut Grove, his family’s farm in Rockbridge County, to Robert McCormick Jr. and Mary Ann Hall McCormick. The McCormick family was Presbyterian Scots-Irish and had immigrated to Pennsylvania in about 1734 before relocating to Rockbridge County in 1779. Although the McCormick plantation paled in grandeur to older plantations in the area, it was nevertheless a considerable operation, comprising four farms totaling approximately 1,800 acres. The McCormicks enslaved approximately a dozen people around the time of Leander McCormick’s birth, in addition to employing white laborers; by 1840, they enslaved sixteen individuals. Robert McCormick invented labor-saving devices that would make his plantation more efficient, tinkering with countless inventions including a hillside plow, a blacksmith bellows, a threshing machine, and a hydraulic machine. 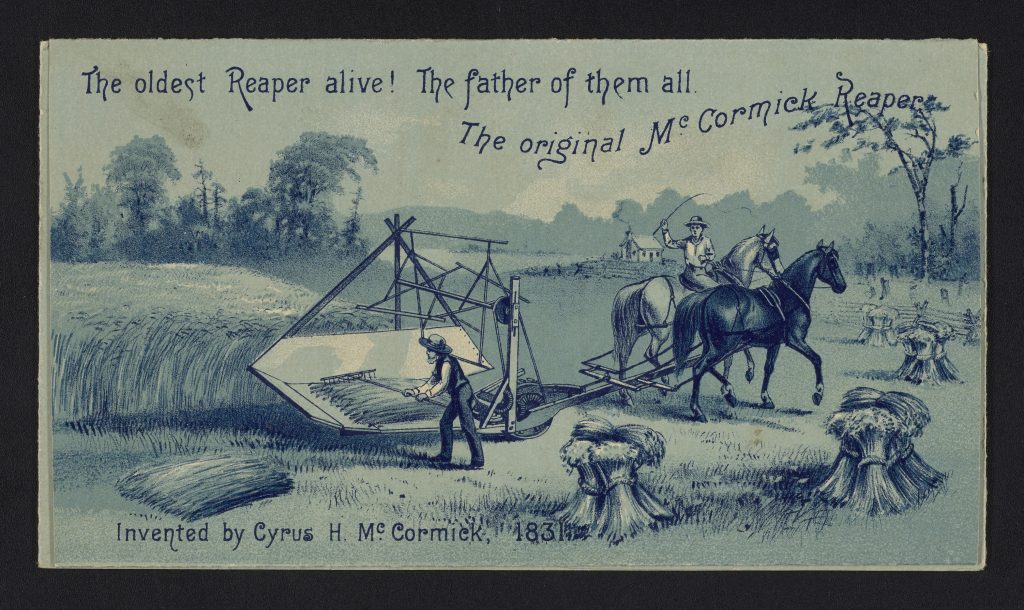 The oldest Reaper alive! The father of them all.

In 1831, a mechanical reaper that Robert McCormick had been working on since 1809 was successfully demonstrated on a field of oats near Steeles Tavern. The machine eliminated the need to cut and gather grain by hand. Instead, two horses pulled the wheeled machine, which turned a series of blades that reaped the grain onto a platform. Although it required two men to operate—one to drive the horses and one to empty the platform where the grain was collected—it was both faster and less strenuous than using a scythe. First called the “Virginia Reaper” when it was advertised in the Staunton Spectator and General Advertiser in 1842, McCormick’s reaper was eventually nicknamed “Old Reliable” and would revolutionize agriculture, placing the McCormick family among the wealthiest in the nation.

Robert McCormick primarily enlisted his sons Leander McCormick and Cyrus McCormick to build and sell his reapers, although he also employed his nephew William Steele McCormick and an acquaintance named Sam Hite, as well as using enslaved labor. The business grew modestly in its early years; by 1844, the McCormicks had sold fifty reapers.

In May 1845, Leander McCormick, who was described as tall with black hair, hazel eyes, and a thick beard, attended his sister Amanda McCormick’s wedding, where he became acquainted with a bridesmaid named Henrietta Maria Hamilton. On October 22 of that year, McCormick married Hamilton at Locust Hill, her family’s estate near Mechanicsville. The couple would have two sons and two daughters, though the elder daughter died in early childhood. 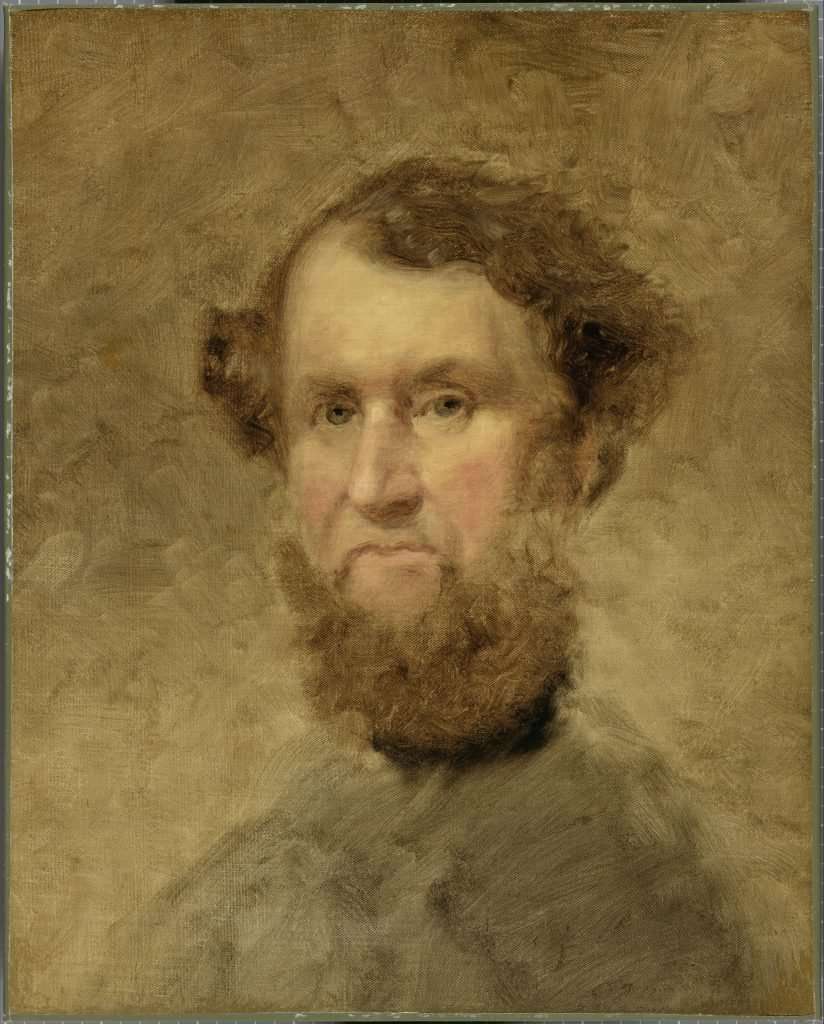 By the time of Robert McCormick’s death in July 1846, the family was building seventy-five machines a year. The death of the elder McCormick sparked a conflict between Cyrus and Leander McCormick that would continue for the rest of their lives. Leander McCormick was said to be his father’s son: a capable engineer who took joy from the design process. His older brother had less interest in mechanics but possessed far more charisma and business acumen. Their mother had persuaded her husband to allow Cyrus McCormick to patent the device in his own name, which he was granted on June 21, 1834. She saw registering the patent with Cyrus McCormick as a form of estate planning and charged him with expanding the business and sharing it with his siblings. After Robert McCormick’s death, however, Cyrus McCormick began to represent himself as the inventor of the McCormick Reaper. Cyrus McCormick claimed that his father had abandoned work on the reaper and that it was he who brought the invention to successful fruition. Leander McCormick took great offense on his father’s behalf. In his old age, he would publish a family history to correct the record, and his son Robert Hall McCormick published a biography of Robert McCormick that included myriad affidavits that attested to his creation of the reaper.

McCormick Brothers in Chicago and their Manufactured Products

After their father’s death, Cyrus McCormick and Leander McCormick decided to expand and relocate the family business. By 1848, they had opened a factory in Chicago, where they were joined by their younger brother William Sanderson McCormick. The relocation was a savvy business move. The southern states relied on enslaved labor to produce cash crops like cotton or tobacco. In contrast, the rapidly growing Midwest was a land of smaller family farms that tended to produce staples like wheat. For these midwestern families, the McCormick reaper represented a fantastic investment that amplified their labor and made their small holdings more productive. The business exploded in the 1850s, with Cyrus McCormick running the company and Leander McCormick overseeing production. Leander McCormick continued to improve the design of the reaper, adding a seat for the raker and then creating self-raking machines that reduced the required manpower from two people to one. He had been paid a salary, but in 1859 he demanded that his brother give him equity in the business. Cyrus McCormick relented and granted Leander McCormick and William McCormick each one quarter of the business, creating C.H. McCormick and Brothers. 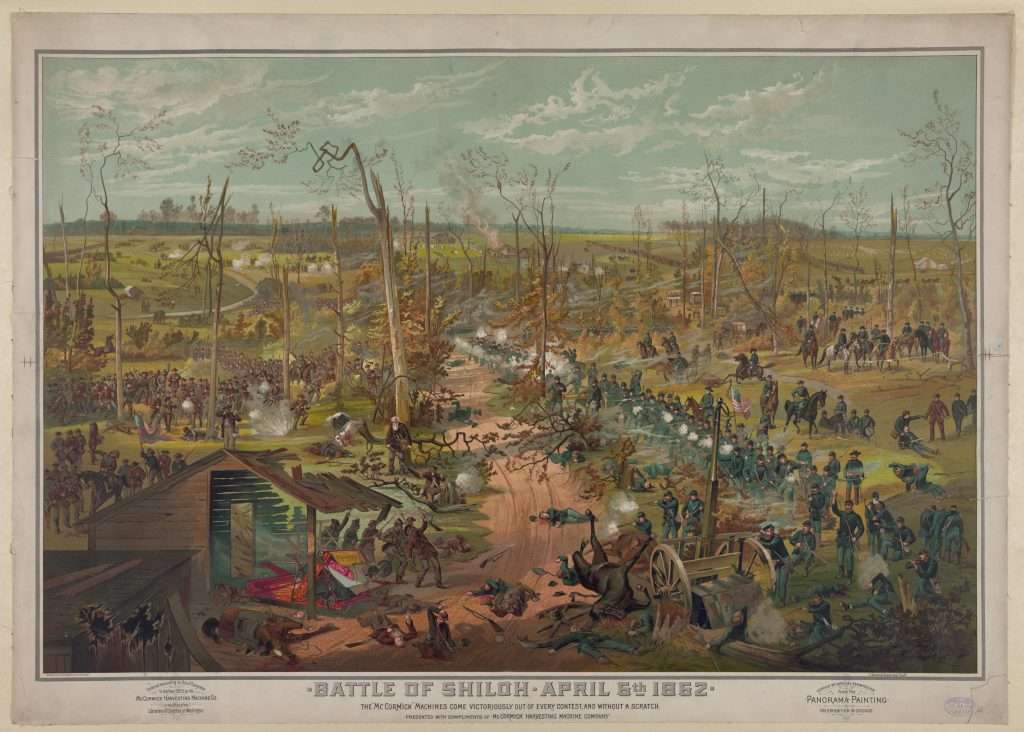 Battle of Shiloh and McCormick Machines

The McCormick reaper didn’t just revolutionize farming in the Midwest. During the American Civil War (1861–1865), the McCormick reaper helped buffer Northern grain output against the loss of labor due to military service. Although the company lost some money (approximately $75,000) that was tied up in credit to Southern farmers, business continued to grow to meet Northern demand. In 1863, a self-raking reaper sold for $190 and the older two-man models for $125. Customers could purchase a reaper with a small down payment, with the remainder due in two years. That year, the McCormick business took in more than $1 million (though that number was swelled by wartime inflation). During the war, Leander McCormick built a lavish house in Chicago on the corner of Rush and Ohio Streets.

In 1871, however, both McCormick’s house and the McCormick factory burned down in the Great Chicago Fire. McCormick supervised the building of a new factory capable of producing 25,000 reapers a year. He also resumed feuding with Cyrus McCormick; the brothers briefly split the business but reconciled in 1879. Rather than resume their partnership, however, they formed a new corporation: the McCormick Harvesting Machine Company. Although Leander McCormick served as the vice president for manufacturing, he began transferring most of his responsibilities to his son Robert Hall McCormick.

Leander McCormick Observatory at the University of Virginia

Although he cherished his native Virginia, and often returned for vacations, Leander McCormick remained in Chicago for the rest of his life. McCormick had a fascination with astronomy, an interest he shared with his father, and in 1870 he decided to build a world-class telescope to promote the sciences in his native state. Although he considered Washington College (now Washington and Lee University) as the site, he was persuaded by Professor Charles S. Venable to select the University of Virginia. McCormick donated $76,000 to the project, further augmented by $25,000 from William H. Vanderbilt and $50,000 from University of Virginia alumni. The McCormick Observatory was dedicated on April 13, 1885. The refracting telescope was the second-largest in the world at the time, boasting a lens twenty-six inches wide. The telescope remained in use until the 1990s and was responsible for the identification of approximately 10,000 stars.

The McCormick corporation was not immune to the Gilded Age’s labor strife, and it played a significant role in the infamous Haymarket Affair. In 1886, McCormick employees joined a national labor strike for an eight-hour workday. In response, the McCormicks hired strikebreakers to replace the laborers. On May 3, the daily clash between strikers and strikebreakers escalated. Fearing a riot, the police opened fire on the crowd, killing at least one person and injuring others. The following day, workers gathered to protest in Chicago’s Haymarket Square. The police tried to break them up, at which point an unknown person detonated a bomb, causing the police again to open fire. Seven officers died along with a similar number of protesters, and dozens of people were injured, precipitating a crackdown on the labor union movement nationwide. 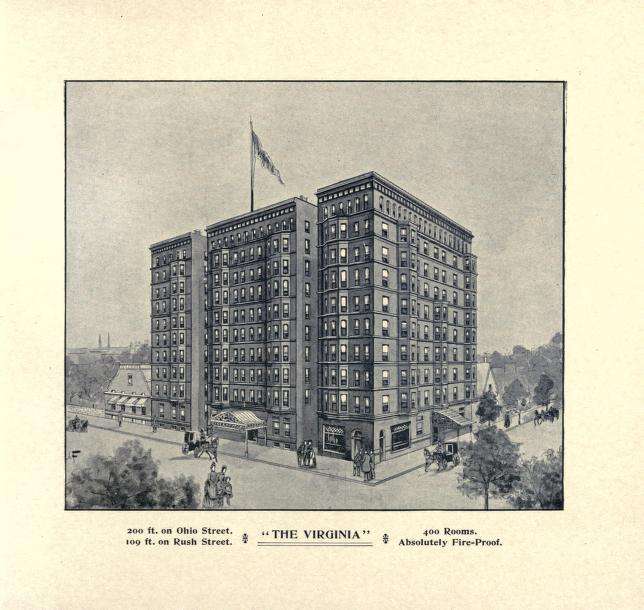 The Virginia Hotel in Chicago

In 1889, McCormick retired and divested his shares in the corporation. By this time, he was one of the largest landowners in Chicago, holding an estimated $5 million worth of real estate. The centerpiece of his holdings was the Virginia Hotel. Built on the site of his burned-down mansion, the upscale hotel advertised 400 fire-proof rooms and all the latest modern conveniences. McCormick moved into the hotel and began writing a family history, Family Record and Bibliography (1896). In November 1899, his wife, Henrietta McCormick, died. McCormick died of pneumonia at the Virginia Hotel on February 20, 1900. He was buried in Chicago’s Graceland Cemetery, where his brother Cyrus McCormick had been laid to rest in 1884.

With financial backing from J. P. Morgan, the next generation of McCormicks merged the McCormick Harvesting Machine Company with several others to create the International Harvester Company in 1902. International Harvester continued to be a major force in American business for much of the twentieth century, though ultimately most of it was sold off in pieces by 1985 and the remainder of the company became Navistar in 1986. 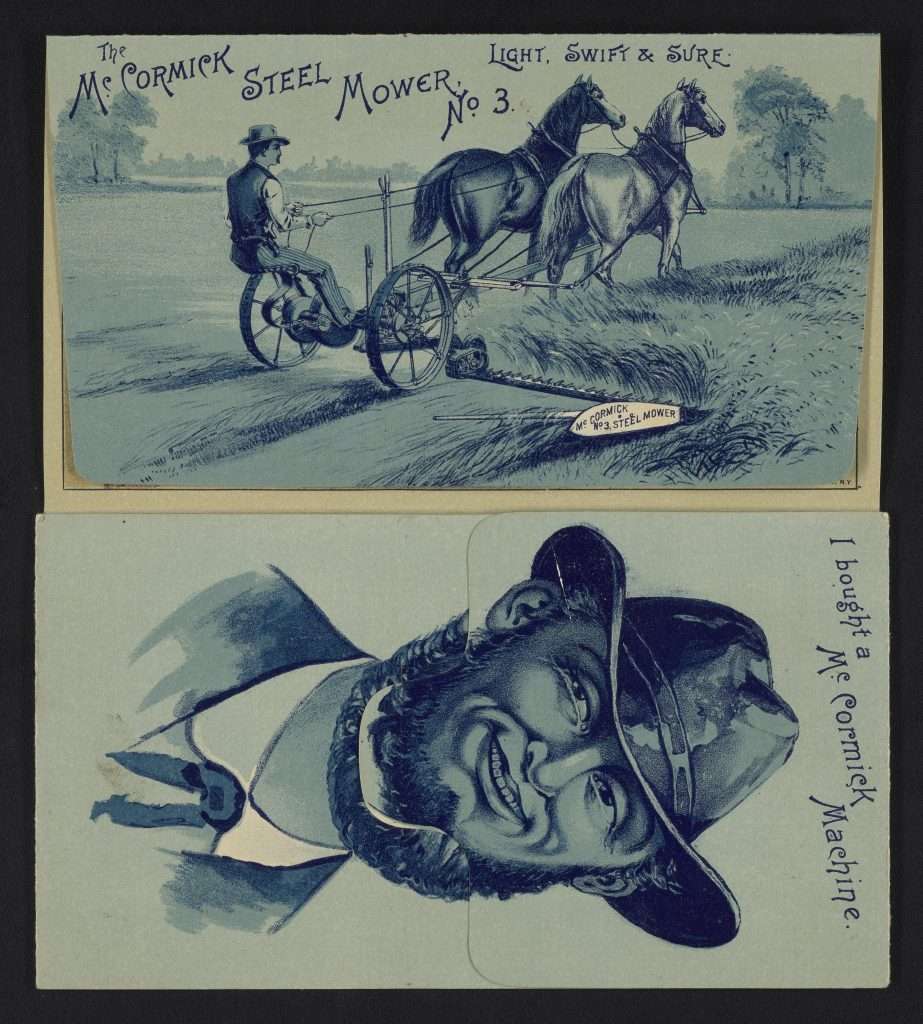 Advertisement for McCormick Steel Mower No. 3 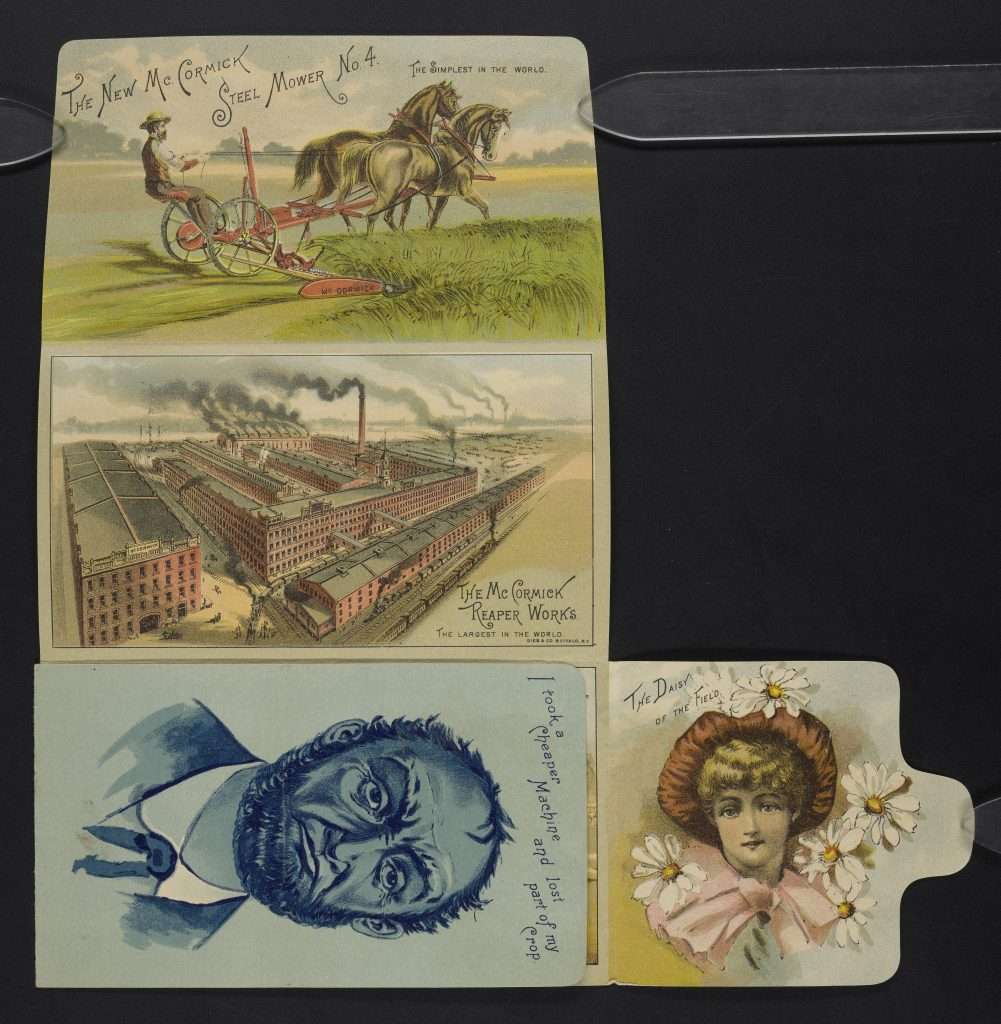 Robert McCormick Jr. produces and demonstrates his first reaper, although he had been tinkering with the invention since 1809.

Leander James McCormick marries Henrietta Hamilton at Locust Hill, her family estate. They will have two sons and two daughters, one of whom did not survive early childhood.

Leander James McCormick and Cyrus McCormick relocate their business to Chicago to produce reapers for the booming Midwest market.

Leander James McCormick constructs a lavish house in Chicago at the corner of Rush and Ohio Streets.

Leander James McCormick donates $76,000 toward a state-of-the-art observatory at the University of Virginia.

The McCormick Observatory is opened at the University of Virginia, boasting the second-largest telescope in the world.

McCormick Harvesting Machine Company workers on strike clash with strikebreakers, leading police to fire on the crowd, killing at least one person. This incident precipitates the Haymarket Affair the following day.

Construction of the 400-room Virginia Hotel is completed on the former site of Leander James McCormick’s burned-down mansion in Chicago. McCormick lives at the hotel until his death.

Leander James McCormick dies in his apartment at the Virginia Hotel in Chicago at the age of 81.