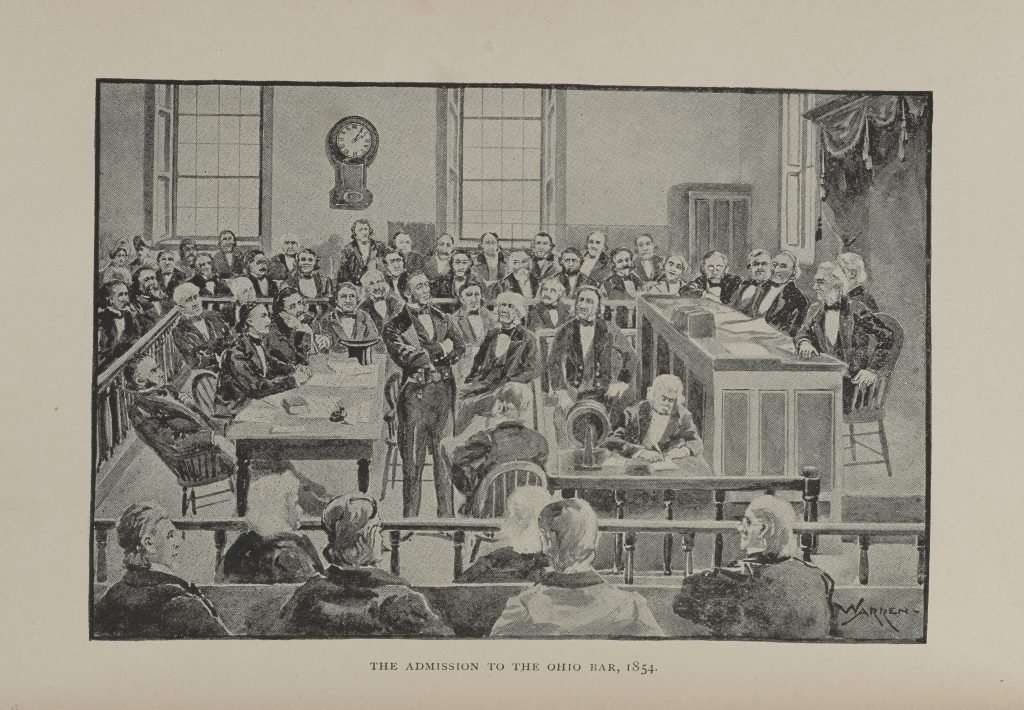 Langston was born free in Louisa County on December 14, 1829. He was the youngest son of a white planter, Ralph Quarles, and his mistress, Lucy Jane Langston, whom he purchased and freed in 1806. She was of mixed African and American Indian ancestry. Langston later emphasized that the views of his father “with regard to slavery and the management of slaves upon a plantation by overseers, were peculiar and unusual.” The former enslaved woman and her former owner had a genuine love for each other but could not legally marry in Virginia. They both died early in 1834 and Langston later wrote that they were buried side by side.

Langston was taken to live with his guardian in Ohio, where Langston grew up and graduated from Oberlin College in 1849. He earned his MA in 1852 and graduated from the college’s seminary in 1853. He also studied law and in 1854 was admitted to the bar. In 1855, Langston won election as clerk of the township of Brownhelm, making him one of the first African Americans to hold elective office in Ohio. He quickly became a major figure in the abolitionist movement and in the state’s nascent Republican Party. In Oberlin, on October 25, 1854, Langston married Caroline Matilda Wall. They had three sons and two daughters, one of whom died in childhood.

During the Civil War, Langston worked tirelessly to recruit men for the 54th and 55th Massachusetts regiments as well as for the 5th Ohio Regiment of the United States Colored Troops. He registered for the draft in June 1863 and desired to serve as a colonel in the United States Army, but the war ended before he could obtain a commission. 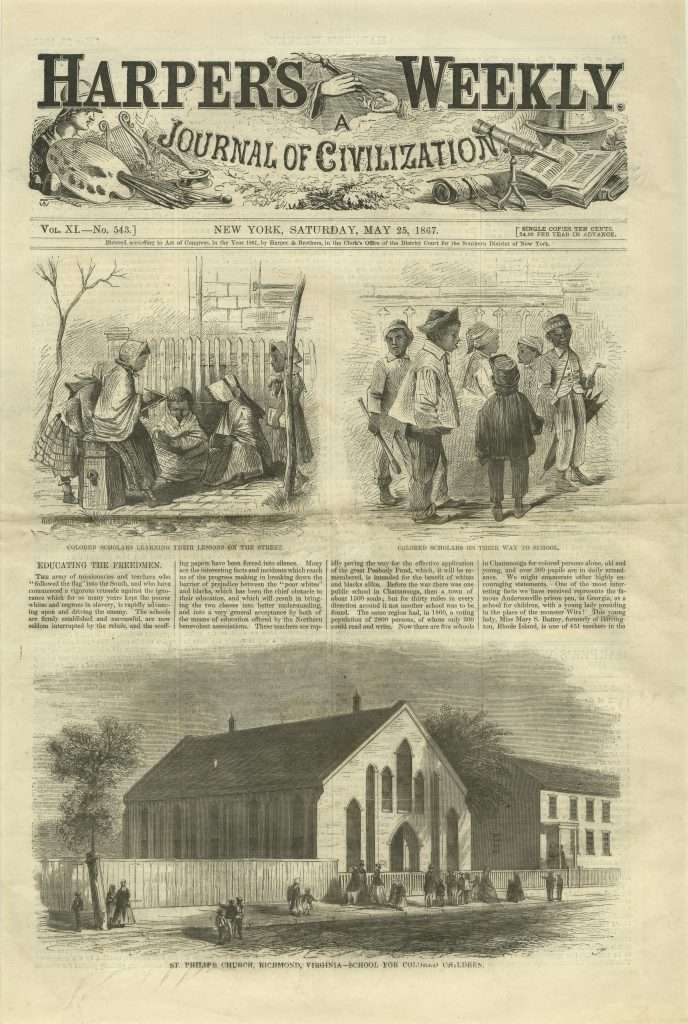 Langston began traveling throughout the South, where he spoke before large black and white audiences about the importance of African American suffrage and education. In May 1867 he joined the Bureau of Refugees, Freedmen, and Abandoned Lands as an agent observing schools in Virginia, and on June 17, 1867, he became the bureau’s general inspector of schools. The following year, he was appointed a law professor at Howard University, in Washington, D.C., and he headed the department when it opened in January 1869. Named dean of the law school in 1870, Langston served as vice president and acting president of the university from December 1873 to July 1875. Howard awarded an honorary LLD to Langston in 1874. He continued to be active in the Republican Party, and in 1871 President Ulysses S. Grant appointed him a member of the Board of Health for the District of Columbia. In 1877 President Rutherford B. Hayes appointed him minister resident and consul general to Haiti, a post in which he served until resigning in 1885. In 1883 Langston published a collection of his speeches entitled Freedom and Citizenship.

Virginia’s State Board of Education appointed Langston president of the nascent Virginia Normal and Collegiate Institute (later Virginia State University), on November 19, 1885. He accepted in December and took office in January 1886 at the campus near Petersburg. One of the principal purposes of the institute, the first state-supported college of its kind in the South, was to prepare African American teachers for the state’s public school system. It was pioneering in the South, too, by being coeducational and by employing both male and female instructors.

During Langston’s first year, the institute had 150 students, but its one large building had not been completed, and the financial management of the construction project had become mired in scandal. Nevertheless, he was able to continue a state-mandated teachers’ institute on the campus in the summer of 1886, and he persuaded the General Assembly to increase appropriations to finish the main building. Langston expanded the regular teacher education program to include such subjects as astronomy, civics, English literature, and rhetoric, and he established six new professorships.

Enrollment increased to almost 200 in his second year, and the summer institute in 1887 attracted 131 teachers. By then, however, unsympathetic Democrats in the assembly had replaced the Republican-appointed members of the board of visitors and the new board clashed with Langston over his vision for the school’s future. The students publicly supported Langston, but when the board of visitors met on December 6, 1887, less than a month before his contract expired, the board elected James H. Johnston to succeed Langston as president.

On January 2, 1888, Langston attended a Republican Party conference in Farmville, where African Americans urged him to run for the House of Representatives from the Fourth District. The district had a black-majority population and encompassed the city of Petersburg and the counties of Amelia, Brunswick, Dinwiddie, Greensville, Lunenburg, Mecklenburg, Nottoway, Powhatan, Prince Edward, Prince George, and Sussex. Langston sought the Republican Party nomination, but the party’s white leader, the former Confederate general William Mahone, opposed him and supported a white Republican, Richard W. Arnold. Even though Mahone had been the principal organizer of a biracial coalition of Republicans and Readjusters that had enacted the law that created the normal institute, he balked at allowing African Americans to rise high in the party’s ranks.

As a consequence of Mahone’s influence within the party, Arnold won the nomination at the September convention, but Langston campaigned for the congressional seat vigorously as an independent Republican. The district’s African Americans supported him rather than Arnold against the wishes of the party’s white leaders, and when the ballots were counted, Arnold had received a mere 3,207 votes and Langston 12,657. But the Democratic Party nominee, Edward C. Venable, was declared the victor with 13,298 votes. 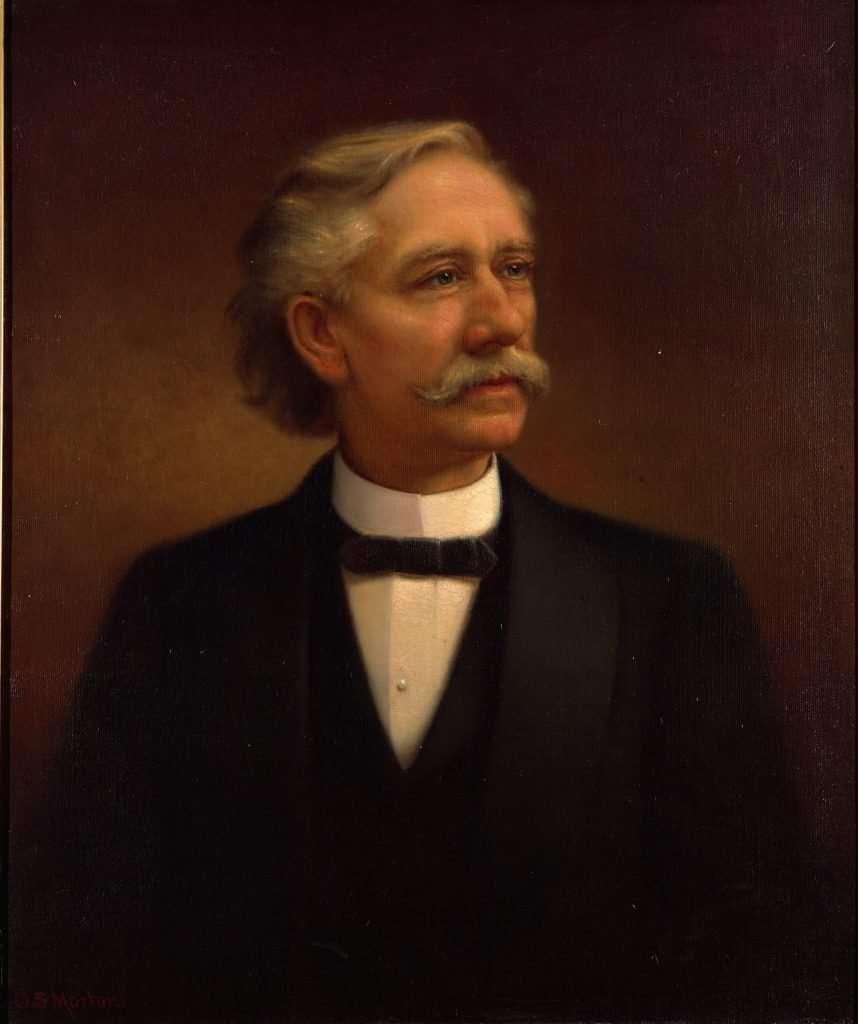 Langston challenged the result after the Fifty-First Congress assembled in 1889 and presented a massive amount of evidence of dishonesty in the conduct of the election and in the tabulation of the votes. Democrats replied with charges of Republican misconduct, too, but on September 23, 1890, the House of Representatives voted to unseat Venable and awarded the seat to Langston. During the preliminaries to the vote, Virginia Congressman Charles T. O’Ferrall, hoping to prevent action by the absence of a quorum, persuaded the other Democrats to refuse to answer when the clerk called the roll. The Speaker of the House of Representatives finally ordered the clerk to record the silent Democrats as present and declared Langston elected.

The first African American to win a seat in Congress from Virginia, Langston actually served only from September 23, 1890, to March 3, 1891, and Congress was not in session in October and November during that time. During the session he sat on the Committee on Education. He proposed a national literacy test to vote in federal elections as an amendment to the U.S. Constitution, which he believed could increase literacy for both black and whites, and introduced a bill to establish a national industrial university for African Americans. Both proposals failed. 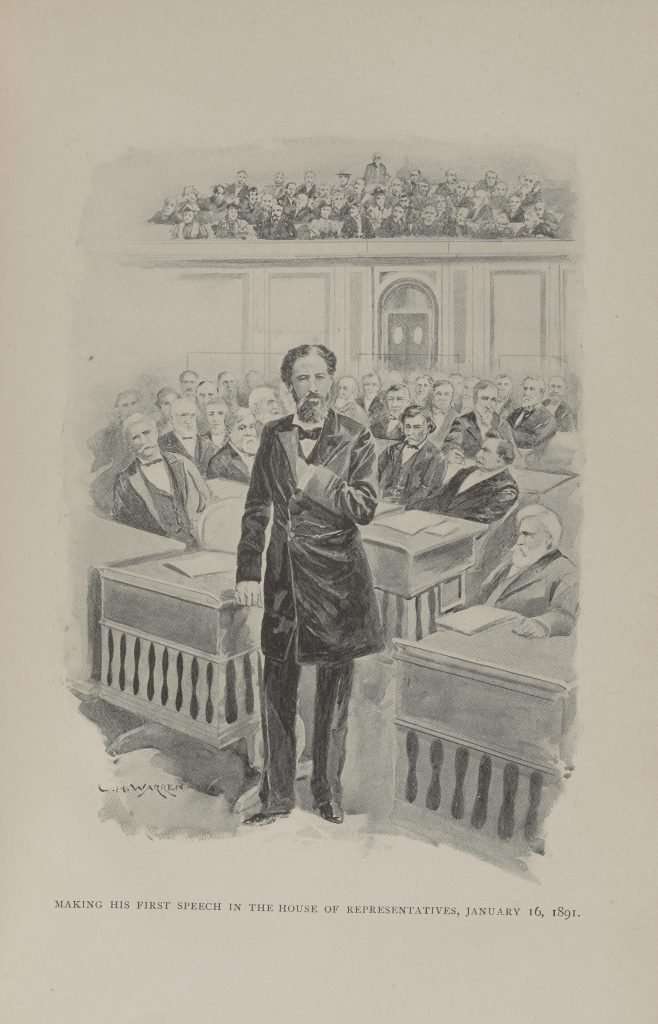 Making His First Speech in the House of Representatives, January 16, 1891.

Langston delivered two speeches in the House of Representatives, one on the merchant marine, and the more important one on January 16, 1891, in support of the so-called Force Bill that the Senate had refused to consider. It would have provided for supervision of federal elections to guarantee African Americans fair treatment. Langston condemned Democrats for opposing full civil rights for all citizens, including southern white men who were also sometimes victims of voter frauds. “The question,” Langston stated, “is, shall every freeman, shall every American citizen, shall every American elector in the North and in the South, everywhere in the country, be permitted to wield a free ballot in the interests of our common country and our free institutions?”

Despite continued opposition from Mahone, Langston ran for reelection in the autumn of 1890 against Democrat James F. Epes in another campaign that probably featured fraud and intimidation of voters. The official tally was 9,991 for Langston and 13,325 for Epes, but Langston chose not to challenge the outcome. The Republican Party again nominated Langston for Congress in 1892, but he declined to run. 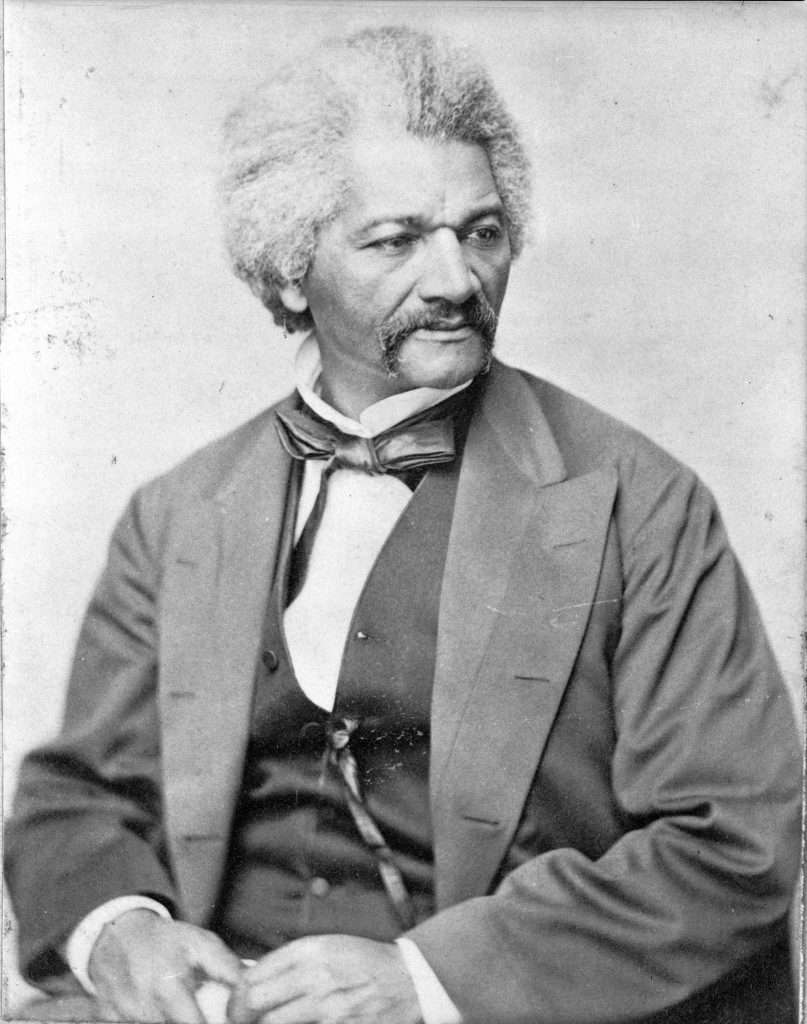 Langston’s 1888 campaign highlighted personal and political differences between him and Frederick Douglass, one of his most outspoken critics. The radically different upbringings of the two prominent African American leaders had not, at first, brought them into conflict. The men possibly saw each other as rivals by the mid-1870s, and the division may have been intensified by callous remarks that Douglass made in 1884 concerning one of Langston’s sons, Frank Langston, who had been tried for and ultimately acquitted of murder.

The two men diverged politically on the subject of black emigration from the South. On the one hand, Langston viewed emigration by freedpeople to the North or West as a positive demonstration of exercising their new freedom, both physically and psychologically, in search of expanded opportunities. Douglass, on the other hand, believed that the best way for freedpeople to achieve prosperity was to remain in the South and farm the lands they knew.

Whatever the reasons, by 1888 they viewed each other as rivals, and in 1888 Mahone asked Douglass to write a letter opposing Langston’s candidacy. Douglass agreed, and his public letter provoked outrage from the local black community in Virginia and increased Langston’s popular appeal in the Fourth District. Furthermore, Douglass’s public opposition to Langston’s candidacy drew criticism from black newspapers like the Richmond Planet as well as the New York Age.

Early in the 1890s, Langston moved back to Washington, D.C., where he published his autobiography, From the Virginia Plantation to the National Capitol, in 1894. His grandnephew, the Harlem Renaissance poet Langston Hughes, later memorialized his tenacity in the face of discrimination in describing Langston’s response when local whites erected a barrier to prevent him from passing through their section of the capital city. Langston, “got out, took his axe and chopped it down while the coachman held his gloves. From then on, without hindrance, he rode behind his snow-white horses through the street[s] of Washington.”

Langston continued to practice law and speak out on issues of race and political equality until he died at his Washington home on November 15, 1897. He was buried in Woodlawn Cemetery, in Washington, D.C.