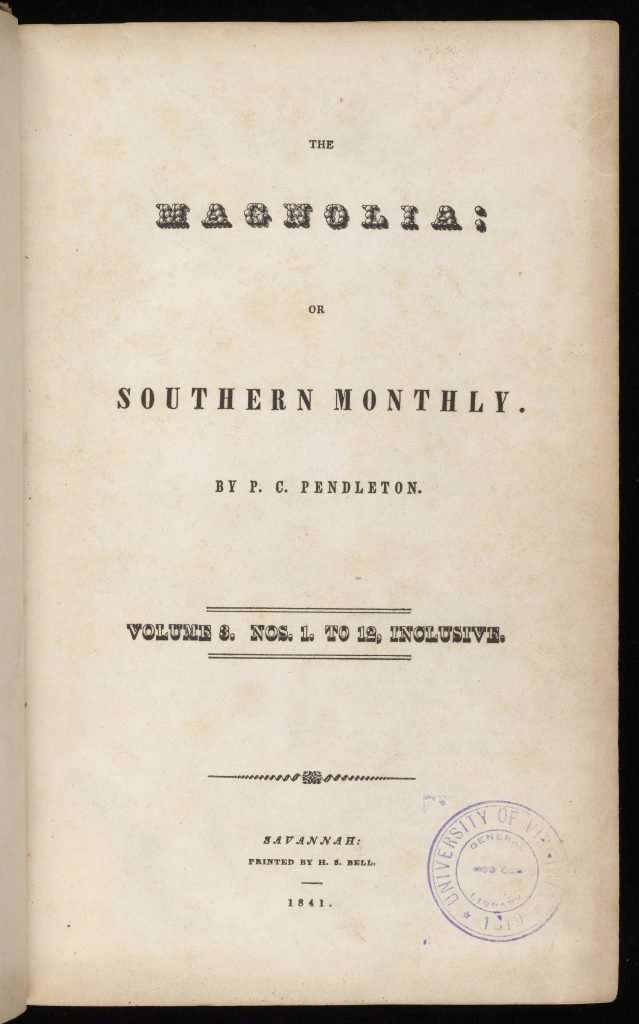 The Magnolia: or Southern Monthly

In an addendum to The Cavaliers of Virginia, or the Recluse of Jamestown (1835), Caruthers promised readers that he would soon offer them another novel, this one about the Spotswood expedition. That storydid not appear until 1841, however; Caruthers’s relocations from New York City to Lexington, Virginia, in 1835 and from Lexington to Savannah, Georgia, in 1837 may have interrupted his work, and a fire in his Lexington home in the spring of 1837 destroyed his manuscript. As a result, the work promised in 1835 was delayed. The Magnolia: or Southern Monthly published the novel in serial form from January to October 1841 under the title The Knights of the Golden Horse-Shoe. Still more time lapsed until the work was finally published in two volumes in 1845, this time under the title The Knights of the Horse-Shoe. The latter title was used for the 1882, 1909, and 1928 editions, but no case can be made for either better representing the author’s intent.

The Knights of the Horse-Shoe was not published by the Harper Brothers, who had published Caruthers’s earlier novels, but by Charles Yancey of Wetumpka, Alabama, a house that lacked the Harpers’ ability to distribute books throughout the United States. There may have been several reasons why Caruthers placed The Knights of the Horse-Shoe with Yancey. The Panic of 1837 had probably forced the Harpers to reduce their list of offerings, and in a tight economy reprints of English favorites seemed safer and more attractive to publishers than the works of American authors. The decision that the Harpers would not publish a third Caruthers novel, then, may have been the publisher’s and not the author’s. Nevertheless, it is undeniable that by the 1840s southerners had begun to call for a southern literature supported by southern publishers.

While Caruthers’s title, Knights of the Horse-Shoe, suggests that the novel’s plot revolves around the Spotswood expedition, the bulk of the work treats events that occur before that expedition, and much of the business of the plot must be completed in order for the expedition to occur. At the beginning of the novel, Spotswood and his family are at their summer residence, Temple Farm, near Yorktown. While dealing with tensions overseas that have interfered with his ability to secure funds for his proposed Blue Ridge exploration, the governor must deal with numerous family matters. He hires a tutor, Henry Hall, for the household while one of his sons, John, impregnates Wingina, the sister of the governor’s Shawnee interpreter. The complications of this situation drive the young man into serious illness.

At the same time, Harry Lee and Ellen Evylin arrive at Temple Farm. Lee’s brother Frank reportedly has been killed in Scotland and Harry is ready to claim Frank’s large estate and, with luck, his relationship with Ellen. A member of the House of Burgesses, Harry Lee has come to help Spotswood gain the votes for his expedition. Ellen, meanwhile, becomes close to the tutor, and conflict between the two suitors ensues. The tutor flees west, stopping at Germanna, a fortified way-station, where he encounters John Spotswood and Wingina, also fleeing. Harry Lee soon arrives, and that night Spotswood is murdered. The tutor is suspected, and Lee has him arrested. During the subsequent trial, Wingina testifies to seeing her brother kill Spotswood, and it is revealed that the tutor is actually Harry’s brother Frank. The trial leaves Harry discredited and in debt to his brother, whose estate he has been spending for some time.

Had the novel ended there, with a wedding between Frank and Ellen, it would have followed the pattern Caruthers had established in his earlier novel The Kentuckian in New-York (1833). Such a work might have made for diverting reading, but it would not have made a comment on the western expansion, a subject about which the author had strong feelings. Instead, Caruthers connects the familial relations developed in the the novel to western expansion and Manifest Destiny. Governor Spotswood, accompanied by Frank Lee and a host of other gentlemen, follows a scout named Joe Jarvis to the crest of the Blue Ridge Mountains. On the way, they learn that the West is a different land, not simply an extension of the East; that is, they shoe their horses, which had not been required in the soft soil of Tidewater Virginia. They must also pursue Native American raiders who have kidnapped Wingina and taken prisoner Eugenia Elliot, the governor’s niece, at Germanna.

Those raiders, some of whom seemed tractable and cooperative back in Williamsburg, prove hostile and resourceful when the white men encounter them on their own ground, and Spotswood and his company must fight their way through a mountain pass to see the Valley of Virginia. They are able to accomplish all of this because Spotswood proves himself the model of the ruler-father of the familial paradigm. Caruthers uses other dimensions of the familial paradigm, as well. After the successful expedition, Spotswood declares the members of the expedition to be members of a fraternal order, the Knights of the Golden Horseshoe. In addition, the letters that pass between Frank and his betrothed Ellen suggest the nature of the ideal union between man and woman and also suggest the flaws of honor as determinant of human behavior.

As was true with Caruthers’s novel The Cavaliers of Virginia, the author uses history and historical characters as a backdrop but does not see himself as beholden to accuracy. The historical Spotswood, for instance, was a bachelor during his service as governor, while Caruthers provides him a wife and four children. The Commissary James Blair, the head of the Church of England in Virginia, appears in the novel as an intimate friend of the family, but he actually was Spotswood’s political opponent and proved instrumental in bringing about the governor’s dismissal in 1722. The Knights of the Golden Horseshoe Expedition was real and occurred in 1716 (not 1714, as Caruthers would have it). The governor and about fifty other men trekked west, crossing the Blue Ridge, visiting the Shenandoah Valley, and returning to Germanna.

Knights of the Horse-Shoe attracted little attention when it was first published. Caruthers’s biographer Curtis Carroll Davis writes that “only five press notices of The Knights of the Golden Horse-Shoe have been uncovered, and of those, only one, that in the Southern Quarterly Review, can qualify as a critique.” The Review‘s notice appeared in its April 1846 issue, and declared admiration for the novel’s “truth and fidelity, its nice discrimination of character, and its pure and graceful style.” It said little else of substance, however, making the reconstruction of how Caruthers’s original audience read the work is especially difficult. Similarly, the lack of surviving comments by the author rules out establishing how he hoped that his work would be understood. It fell to Davis to attempt the first detailed discussion of the novel in his biography of Caruthers.

Davis pointed out that the expedition “constituted a skein of events almost ready-cut for custom tailoring by some writer of fiction,” and Caruthers, writing the first full-length book ever written about the expedition glamorized the governor and his men. For Davis, the expedition is the force that unifies the subplots revolving around Frank Lee’s identity and John Spotswood’s indiscretions with Wingina. As he sees it, the courtship plots “make for suspense in their own right”—even though the ordering of events in the plot suggests that Caruthers saw connections between the expedition and the romantic lives of his characters. Harry Lee, the thoroughly dastardly villain, helps to make the work “an archetype of the swords-and-cloaks romance,” but Davis struggles with the idea of The Knights of the Horse-Shoe as romance. While he appears to take issue with the commentators who disparage the historical inaccuracies of the work, he is still careful in his own reading to point out the major differences between Caruthers’s representation and what the author had found in the sources he is known to have consulted.