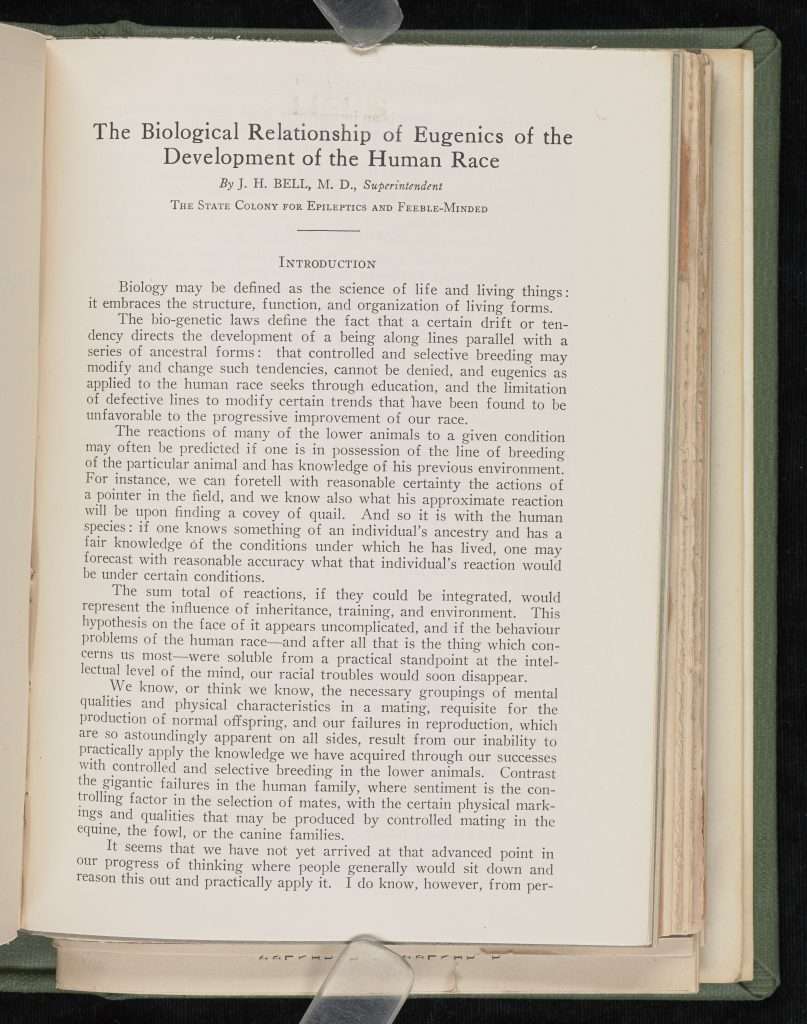 Bell’s The biological relationship of eugenics to the development of the human race (1930), Page 3

Biology may be defined as the science of life and living things: it embraces the structure, function, and organization of living forms.

The bio-genetic laws define the fact that a certain drift or tendency directs the development of a being along lines parallel with a series of ancestral forms: that controlled and selective breeding may modify and change such tendencies, cannot be denied, and eugenics as applied to the human race seeks through education, and the limitation of defective lines to modify certain trends that have been found to be unfavorable to the progressive improvement of our race.

The reactions of many of the lower animals to a given condition may often be predicted if one is in possession of the line of breeding of the particular animal and has knowledge of his previous environment. For instance, we can foretell with reasonable certainty the actions of a pointer in the field, and we know also what his approximate reaction will be upon finding a covey of quail. And so it is with the human species: if one knows something of an individual’s ancestry and has a fair knowledge of the conditions under which he has lived, one many forecast with reasonable accuracy what that individual’s reaction would be under certain conditions.

The sum total of reactions, if they could be integrated, would represent the influence of inheritance, training, and environment. This hypothesis on the face of it appears uncomplicated, and if the behaviour problems of the human race – and after all that is the thing which concerns us most – were soluble from a practical standpoint at the intellectual level of the mind, our racial troubles would soon disappear.

We know, or think we know, the necessary groupings of mental qualities and physical characteristics in a mating, requisite for the production of normal offspring, and our failures in reproduction, which are so astoundingly apparent on all sides, result from our inability to practically apply the knowledge we have acquired through our successes with controlled and selective breeding in the lower animals. Contrast the gigantic failures in the human family, where sentiment is the controlling factor in the selection of mates, with the certain physical markings and qualities that may be produced by controlled mating in the equine, the fowl, or the canine families.

It seems that we have not yet arrived at that advanced point in our progress of thinking where people generally would sit down and reason this out and practically apply it. I do know, however, from per- 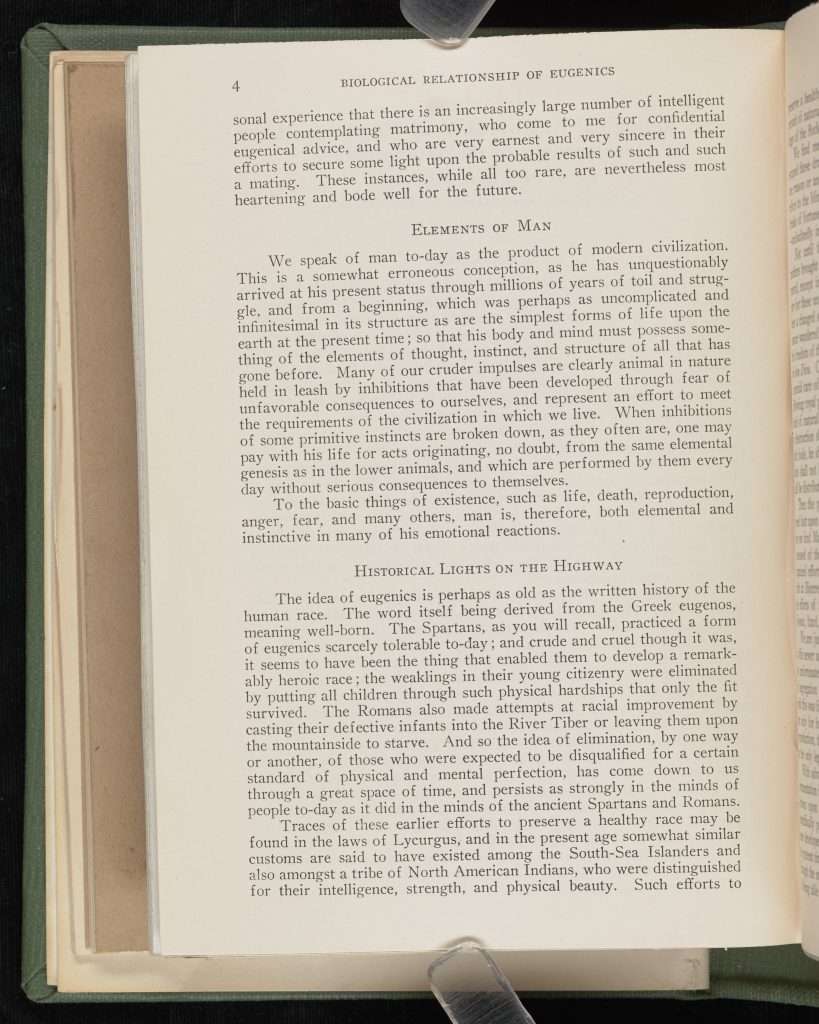 Bell’s The biological relationship of eugenics to the development of the human race (1930), Page 4

sonal experience that there is an increasingly large number of intelligent people contemplating matrimony, who come to me for confidential eugenical advice, and who are very earnest and very sincere in their efforts to secure some light upon the probable results of such and such a mating. These instances, while all too rare, are nevertheless most heartening and bode well for the future.

We speak of man to-day as the product of modern civilization. This is a somewhat erroneous conception, as he has unquestionably arrived at his present status through millions of years of toil and struggle, and from a beginning, which was perhaps as uncomplicated and infinitesimal in its structure as are the simplest forms of life upon the earth at the present time; so that his body and mind must possess something of the elements of thought, instinct, and structure of all that has gone before. Many of our cruder impulses are clearly animal in nature held in leash by inhibitions that have been developed through fear of unfavorable consequences to ourselves, and represent an effort to meet the requirements of the civilization in which we live. When inhibitions of some primitive instincts are broken down, as they often are, one may pay with his life for acts originating, no doubt, from the same elemental genesis as in the lower animals, and which are performed by them every day without serious consequences to themselves.

To the basic things of existence, such as life, death, reproduction, anger, fear, and many others, man is, therefore, both elemental and instinctive in many of his emotional reactions.

Historical Lights on the Highway

The idea of eugenics is perhaps as old as the written history of the human race. The word itself being derived from the Greek eugenos, meaning well-born. The Spartans, as you will recall, practiced a form of eugenics scarcely tolerable to-day; and crude and cruel though it was, it seems to have been the thing that enabled them to develop a remarkably heroic race; the weaklings in their young citizenry were eliminated by putting all children through such physical hardships that only the fit survived. The Romans also made attempts at racial improvement by casting their defective infants into the River Tiber or leaving them upon the mountainside to starve. And so the idea of elimination, by one way or another, of those who were expected to be disqualified for a certain standard of physical and mental perfection, has come down to us through a great space of time, and persists as strongly in the minds of people to-day as it did in the minds of the ancient Spartans and Romans.

Traces of these earlier efforts to preserve a healthy race may be found in the laws of Lycurgus, and in the present age somewhat similar customs are said to have existed among the South-Sea Islanders and also amongst a tribe of North American Indians, who were distinguished for their intelligence, strength, and physical beauty. Such efforts to 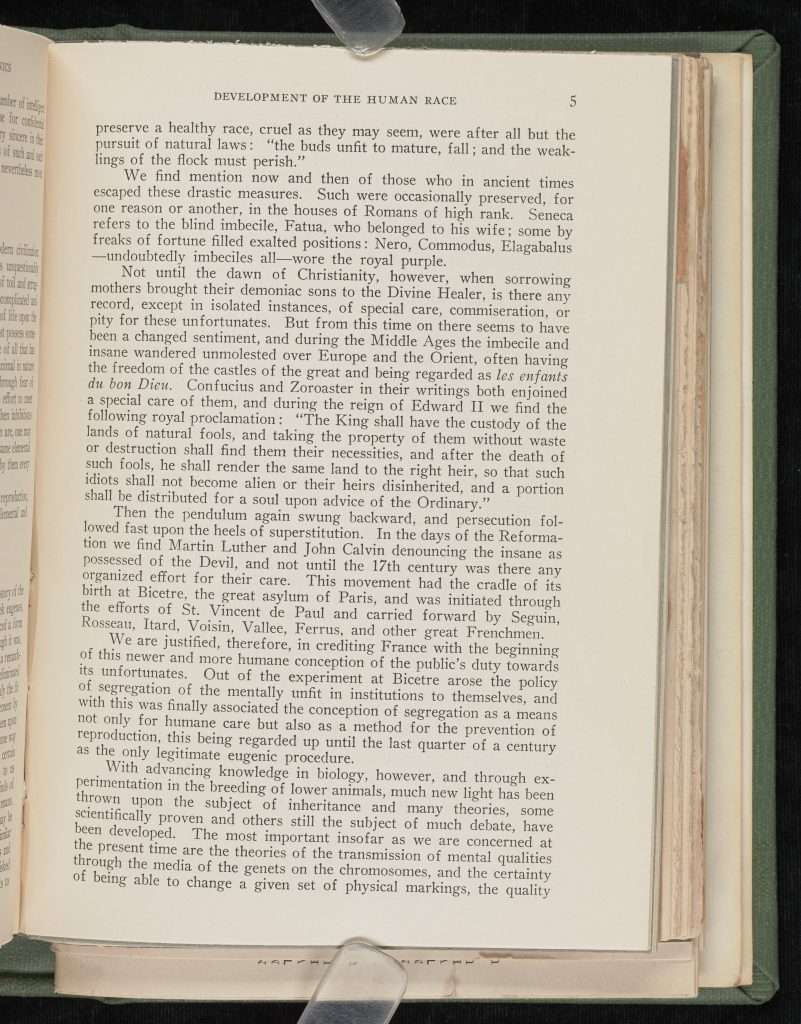 Bell’s The biological relationship of eugenics to the development of the human race (1930), Page 5

preserve a healthy race, cruel as they may seem, were after all but the pursuit of natural laws: “the buds unfit to mature, fall; and the weaklings of the flock must perish.”

We find mention now and then of those who in ancient times escaped these drastic measures. Such were occasionally preserved, for one reson or another, in the houses of Romans of high rank. Seneca refers to the blind imbecile, Fatua, who belonged to his wife; some by freaks of fortune filled exalted positions: Nero, Commodus, Elagabalus – undoubtedly imbeciles all – wore the royal purple.

Not until the dawn of Christianity, however, when sorrowing mothers brought their demoniac sons to the Divine Healer, is there any record, except in isolated instances, of special care, commiseration, or pity for these unfortunates. But from this time on there seems to have been a changed sentiment, and during the Middle Ages the imbecile and the insane wandered unmolested over Europe and the Orient, often having the freedom of the castles of the great and being regarded as les enfants du bon Dieu. Confucius and Zoroaster in their writings both enjoined a special care of them, and during the reign of Edward II we find the following royal proclamation: “The King shall have the custody of the lands of natural fools, and taking the property of them without waste or destruction shall find them their necessities, and after the death of such fools, he shall render the same land to the right heir, so that such idiots shall not become alien or their heirs disinherited, and a portion shall be distributed for a soul upon advice of the Ordinary.”

Then the pendulum again swung backward, and persecution followed fast upon the heels of superstition. In the days of the Reformation we find Martin Luther and John Calvin denouncing the insane as possessed of the Devil, and not until the 17th century was there any organized effort for their care. This movement had the cradle of its birth at Bicetre, the great asylum of Paris, and was initiated through the efforts of St. Vincent de Paul and carried forward by Seguin, Rosseau, Itard, Voisin, Vallee Ferrus, and other great Frenchmen.

We are justified, therefore, in crediting France with the beginning of this newer and more humane conception of the public’s duty towards its unfortunates. Out of the experiment at Bicetre arose the policy of segregation of the mentally unfit in institutions to themselves, and with this was finally associated the conception of segregation as a means not only for humane care but also as a method for the prevention of reproduction, this being regarded up until the last quarter of a century as the only legitimate eugenic procedure.

With advancing knowledge in biology, however, and through experimentation in the breeding of lower animals, much new light has been thrown upon the subject of inheritance and many theories, some scientifically proven and others still the subject of much debate, have been developed. The most important insofar as we are concerned at the present time are the theories of the transmission of mental qualities through the media of the genets on the chromosomes, and the certainty of being able to change a given set of physical markings, the quality 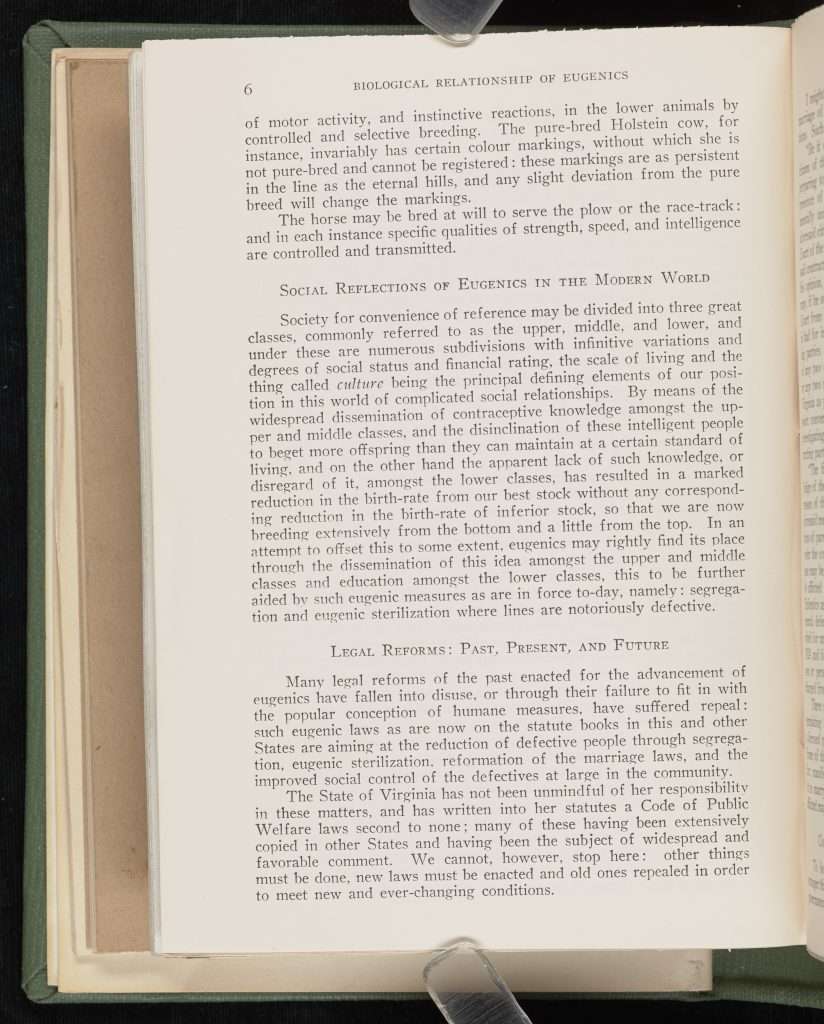 Bell’s The biological relationship of eugenics to the development of the human race (1930), Page 6

of motor activity, and instinctive reactions, in the lower animals by controlled and selective breeding. The pure-bred Holstein cow, for instance, invariably has certain colour markings, without which she is not pure-bred and cannot be registered: these markings are as persistent in the line as the eternal hills, and any slight deviation from the pure breed will change the markings.

The horse may be bred at will to serve the plow or the race-track: and in each instance specific qualities of strength, speed, and intelligence are controlled and transmitted.

Social Reflections of Eugenics in the Modern World

Society for convenience of reference may be divided into three great classes, commonly referred to as the upper, middle, and lower, and under these are numerous subdivisions with infinitive variations and degrees of social status and financial rating, the scale of living and the thing called culture being the principal defining elements of our position in this world of complicated social relationships. By means of the widespread dissemination of contraceptive knowledge amongst the upper and middle classes, and the disinclination of these intelligent people to beget more offspring than they can maintain at a certain standard of living, and on the other hand the apparent lack of such knowledge, or disregard of it, amongst the lower classes, has resulted in a marked reduction in the birth-rate for our best stock without any corresponding reduction in the birth-rate of inferior stock, so that we are now breeding extensively from the bottom and a little from the top. In an attempt to offset this to some extent, eugenics may rightly find its place through the dissemination of this idea amongst the upper and middle classes and education amongst the lower classes, this to be further aided by such eugenic measures as are in force to-day, namely: segregation and eugenic sterilization where lines are notoriously defective.

Report on Sterilization: an Excerpt from John Hendren Bell’s Eugenic Control and its Relationship to the Science of Life and Reproduction (1931)

RELATED CONTENT
Categories:
Type:
MAP
TIMELINE
1930
John H. Bell publishes The Biological Relationship of Eugenics to the Development of the Human Race, in which he justifies the eugenics movement, discusses its history, and outlines its potential to improve the "stock" of the human race.
CITE THIS ENTRY