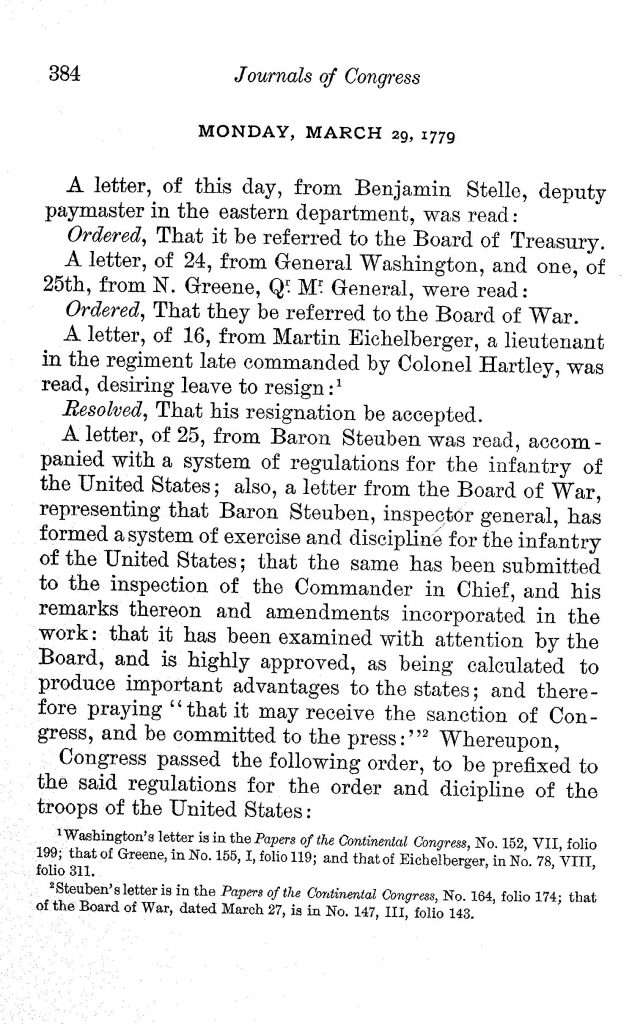 A letter, of this day, from Benjamin Stelle, deputy paymaster in the eastern department, was read:

Ordered, That it be referred to the Board of Treasury.

Ordered, That they be referred to the Board of War.

A letter, of 16, from Martin Eichelberger, a lieutenant in the regiment late commanded by Colonel Hartley, was read, desiring leave to resign:

Resolved, That his resignation be accepted.

A letter, of 25, from Baron Steuben was read, accompanied with a system of regulations for the infantry of the United States; also, a letter from the Board of War, representing that Baron Steuben, inspector general, has formed a system of exercise and discipline for the infantry of the United States; that the same has been submitted to the inspection of the Commander in Chief, and his remarks thereon and amendments incorporated in the work: that it has been examined with attention by the Board, and is highly approved, as being calculated to produce important advantages to the states; and therefore praying “that it may receive the sanction of Congress, and be committed to the press:” Whereupon,

Congress passed the following order, to be prefixed to the said regulations for the order and dicipline of the troops of the United States: 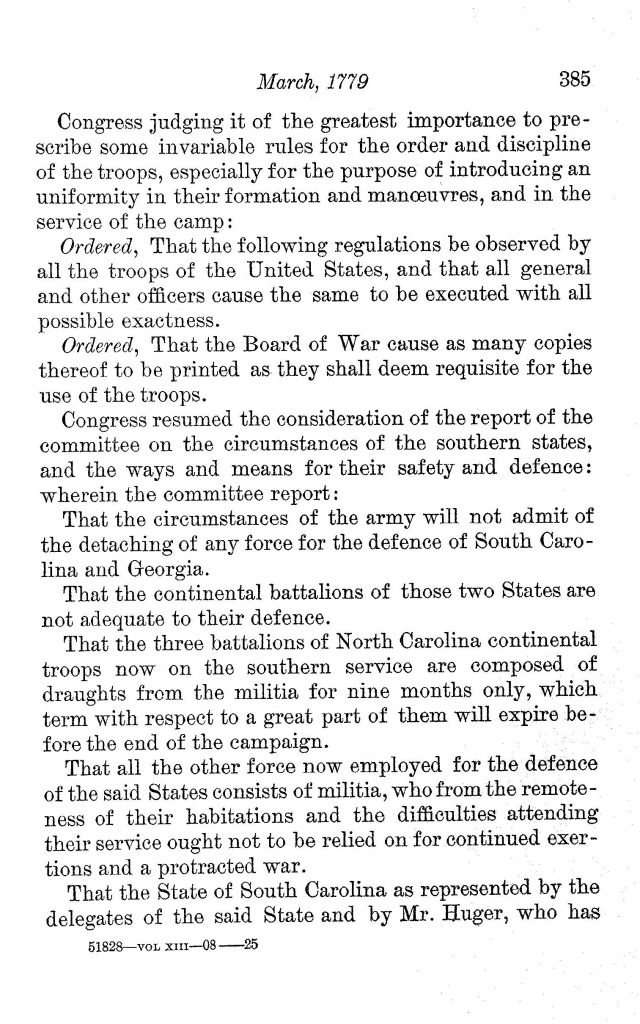 Congress judging it of the greatest importance to prescribe some invariable rules for the order and discipline of the troops, especially for the purpose of introducing an uniformity in their formation and manoeuvres, and in the service of the camp:

Ordered, That the following regulations be observed by all the troops of the United States, and that all general and other officers cause the same to be executed with all possible exactness.

Ordered, That the Board of War cause as many copies thereof to be printed as they shall deem requisite for the use of the troops.

Congress resumed the consideration of the report of the committee on the circumstances of the southern states, and the ways and means for their safety and defence: wherein the committee report:

That the circumstances of the army will not admit of the detaching of any force for the defence of South Carolina and Georgia.

That the continental battalions of those two States are not adequate to their defence.

That the three battalions of North Carolina continental troops now on the southern service are composed of draughts from the militia for nine months only, which term with respect to a great part of them will expire before the end of the campaign.

That all the other force now employed for the defence of the said States consists of militia, who from the remoteness of their habitations and the difficulties attending their service ought not to be relied on for continued exertions and a protracted war.

That the State of South Carolina as represented by the delegates of the said State and by Mr. Huger, who has 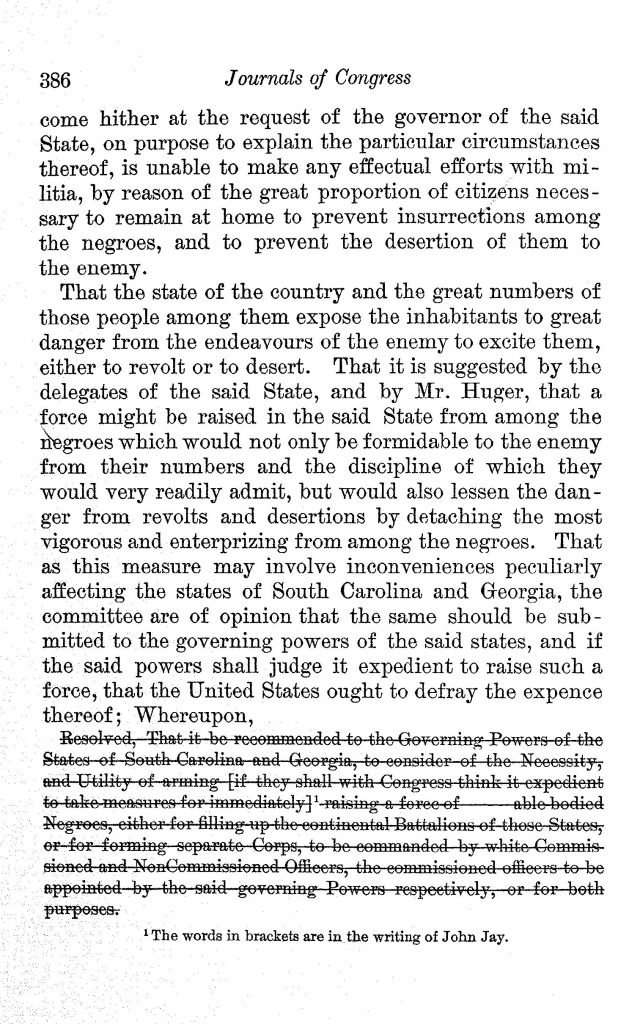 come hither at the request of the governor of the said State, on purpose to explain the particular circumstances thereof, is unable to make any effectual efforts with militia, by reason of the great proportion of citizens necessary to remain at home to prevent insurrections among the negroes, and to prevent the desertion of them to the enemy.

That the state of the country and the great numbers of those people among them expose the inhabitants to great danger from the endeavours of the enemy to excite them, either to revolt or to desert. That it is suggested by the delegates of the said State, and by Mr. Huger, that a force might be raised in the said State from among the negroes which would not only be formidable to the enemy from their numbers and the discipline of which they would very readily admit, but would also lessen the danger from revolts and desertions by detaching the most vigorous and enterprizing from among the negroes. That as this measure may involve inconveniences peculiarly affecting the states of South Carolina and Georgia, the committee are of opinion that the same should be submitted to the governing powers of the said states, and if the said powers shall judge it expedient to raise such a force, that the United States ought to defray the expence thereof; Whereupon, 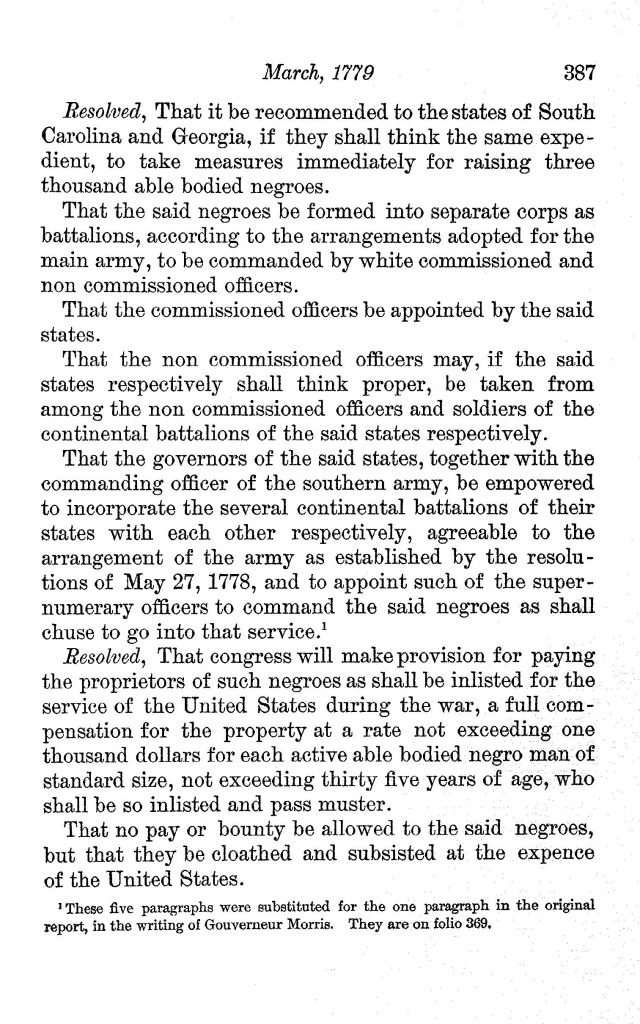 Resolved, That it be recommended to the states of South Carolina and Georgia, if they shall think the same expedient, to take measures immediately for raising three thousand able bodied negroes.

That the said negroes be formed into separate corps as battalions, according to the arrangements adopted for the main army, to be commanded by white commissioned and non commissioned officers.

That the commissioned officers be appointed by the said states.

That the governors of the said states, together with the commanding officer of the southern army, be empowered to incorporate the several continental battalions of theft states with each other respectively, agreeable to the arrangement of the army as established by the resolutions of May 27, 1778, and to appoint such of the supernumerary officers to command the said negroes as shall chuse to go into that service.

Resolved, That congress will make provision for paying the proprietors of such negroes as shall be inlisted for the service of the United States during the war, a full compensation for the property at a rate not exceeding one thousand dollars for each active able bodied negro man of standard size, not exceeding thirty five years of age, who shall be so inlisted and pass muster.

That no pay or bounty be allowed to the said negroes, but that they be cloathed and subsisted at the expence of the United States. 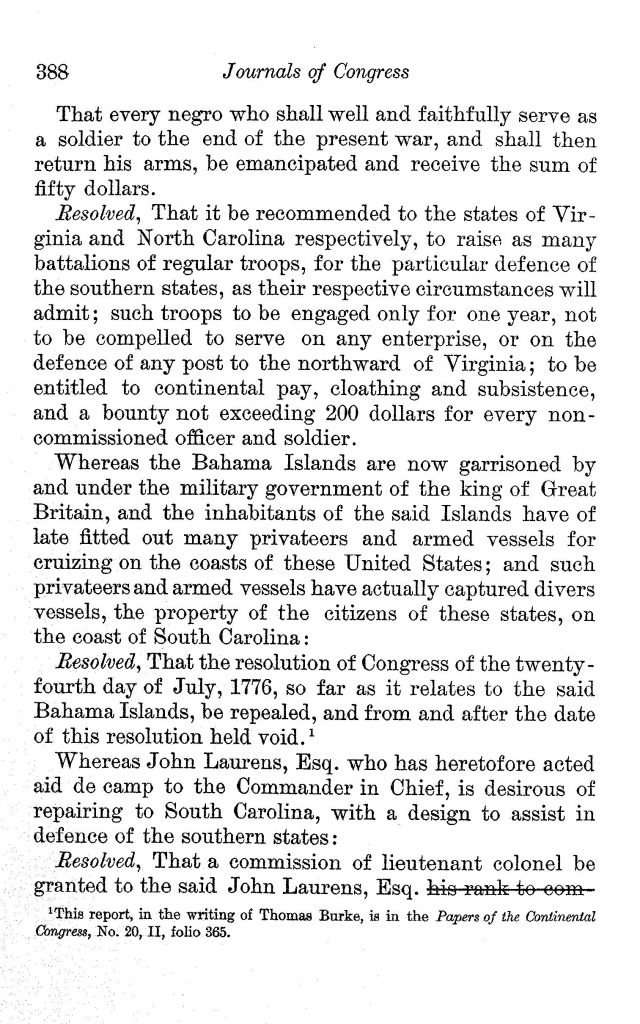 That every negro who shall well and faithfully serve as a soldier to the end of the present war, and shall then return his arms, be emancipated and receive the sum of fifty dollars.

Resolved, That it be recommended to the states of Virginia and North Carolina respectively, to raise as many battalions of regular troops, for the particular defence of the southern states, as their respective circumstances will admit; such troops to be engaged only for one year, not to be compelled to serve on any enterprise, or on the defence of any post to the northward of Virginia; to be entitled to continental pay, cloathing and subsistence, and a bounty not exceeding 200 dollars for every noncommissioned officer and soldier.

Whereas the Bahama Islands are now garrisoned by and under the military government of the king of Great Britain, and the inhabitants of the said Islands have of late fitted out many privateers and armed vessels for cruizing on the coasts of these United States; and such privateers and armed vessels have actually captured divers vessels, the property of the citizens of these states, on the coast of South Carolina:

Resolved, That the resolution of Congress of the twenty-fourth day of July, 1776, so far as it relates to the said Bahama Islands, be repealed, and from and after the date of this resolution held void.

Whereas John Laurens, Esq. who has heretofore acted aid de camp to the Commander in Chief, is desirous of repairing to South Carolina, with a design to assist in defence of the southern states:

Resolved, That a commission of lieutenant colonel be granted to the said John Laurens, Esq. 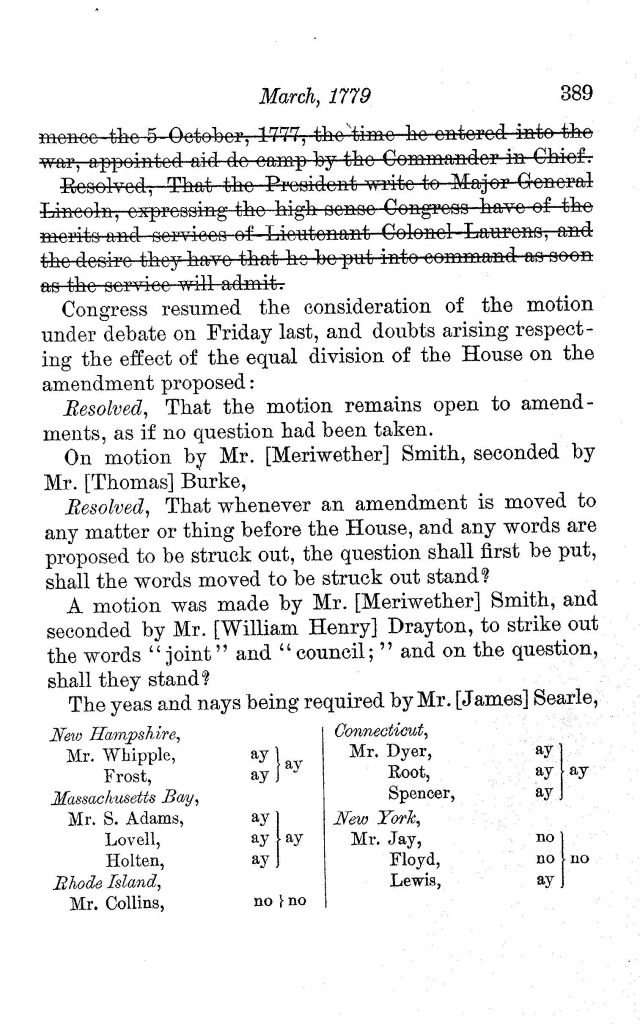 mence the 5 October, 1777, the time he entered into the war, appointed aid do camp by the Commander in Chief.

Congress resumed the consideration of the motion under debate on Friday last, and doubts arising respecting the effect of the equal division of the House on the amendment proposed:

Resolved, That the motion remains open to amendments, as if no question had been taken.

A motion was made by Mr. [Meriwether] Smith, and seconded by Mr. [William Henry] Drayton, to strike out the words “joint” and “council;” and on the question, shall they stand?

The yeas and nays being required by Mr. [James] Searle, 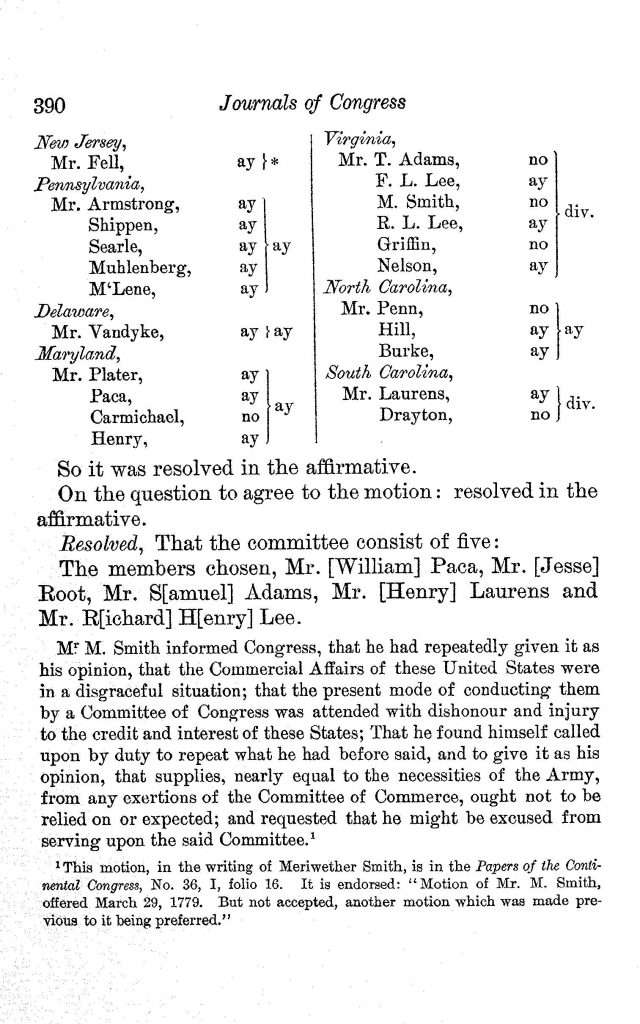 So it was resolved in the affirmative.

On the question to agree to the motion: resolved in the affirmative.

Resolved, That the committee consist of five:

Mr. M. Smith informed Congress, that he had repeatedly given it as his opinion, that the Commercial Affairs of these United States were in a disgraceful situation; that the present mode of conducting them by a Committee of Congress was attended with dishonour and injury to the credit and interest of these States; That he found himself called upon by duty to repeat what he had before said, and to give it as his opinion, that supplies, nearly equal to the necessities of the Army, from any exertions of the Committee of Commerce, ought not to be relied on or expected; and requested that he might be excused from serving upon the said Committee.