Sarah G. Boyd was born in February 1866 in Albemarle County and was the daughter of Ellen D. Boyd and George W. Boyd, a builder. The family moved to Henrico County late in the 1860s and then to Richmond, where her father became a well known contractor who constructed, among other notable buildings, Sixth Mount Zion Baptist Church and the large hall of the Grand Fountain United Order of True Reformers. Sallie Boyd, as she was known in her youth, attended the Richmond Colored Normal School with fellow students John Mitchell Jr., and Maggie Lena Mitchell (later Walker). After graduating in 1883, Boyd became a teacher at Baker School in the city, where she taught alongside pioneering educator Rosa L. Dixon Bowser and the poet Daniel Webster Davis. She remained on the faculty for five years and on July 4, 1888, married another fellow teacher, Miles B. Jones. They had no children.

In 1890, Sarah Jones began studying medicine at Howard University, in Washington, D.C. She received her MD in 1893 and on April 27 of that year became the first African American woman to pass the Virginia Medical Examining Board’s examination (the first white woman had passed in 1890). One of eighty-six applicants who appeared before the board that day, she received her highest scores in surgery, practice, and hygiene. Jones established her practice in Richmond and offered a one-hour free daily clinic for women and children. Throughout the decade Richmond’s African Americans suffered a mortality rate nearly twice that of white residents, and black women suffered a disproportionate number of stillbirths. During the 1890s, Jones was one of only three female physicians and about half a dozen African American physicians in the city.

In 1893, Jones became the medical examiner for the female members of the Southern Aid and Insurance Company, which touted itself as the only such company to recognize female doctors. In 1897, she also served as the medical examiner for the recently organized Woman’s Corner Stone Beneficial Association. Concerned about the availability of professional medical care within Richmond’s African American community, Jones lectured at the nurses’ training school that the Woman’s Central League of Richmond operated. Physician Robert Emmett Jones had established it in 1899 to train women in a variety of professions. 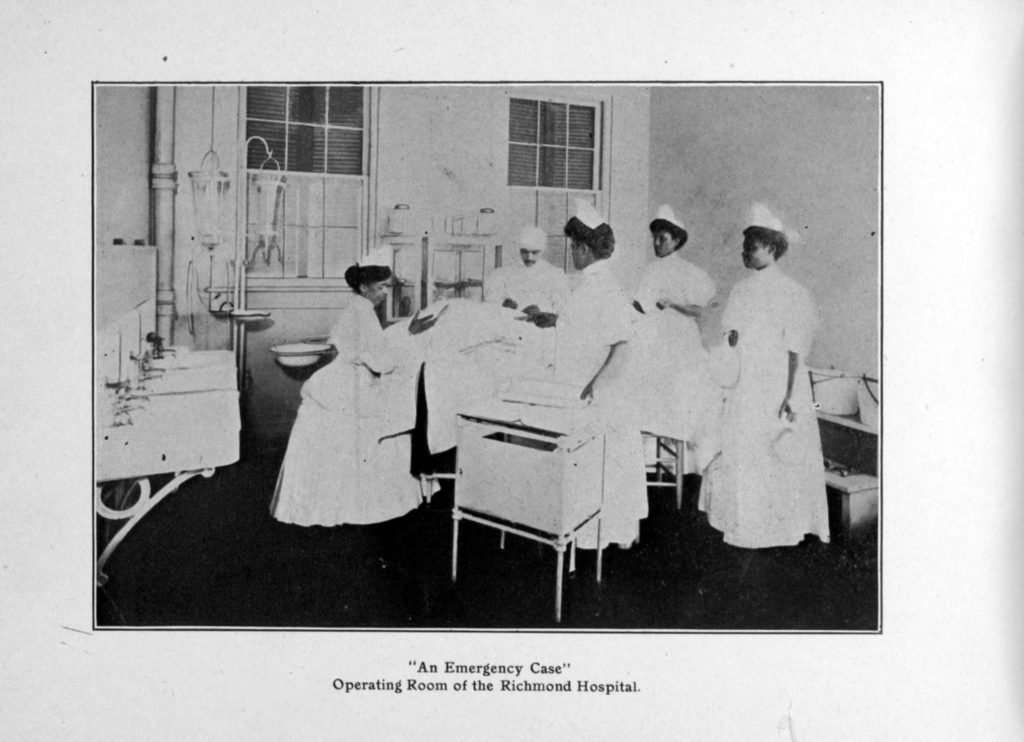 An Emergency Case Operating Room of the Richmond Hospital.

Because African American physicians were not yet welcome in the medical societies of white physicians, on February 19, 1902, Jones and her husband, who had earned his MD from Howard University the previous year, helped establish the Medical and Chirurgical Society of Richmond. Recognizing the need for additional medical facilities available to African Americans, several members of the society, including Jones and her husband, organized the Richmond Hospital Association in October 1902. The association purchased a house on East Baker Street, where it opened a hospital for black patients in February 1903, and a school to train nurses scheduled to begin a month later. The hospital had rooms for twenty-five patients and a charity ward with sixteen beds. In March 1905, it became the Richmond Hospital Association and Medical College, and Training School for Nurses, Incorporated.

Jones established a successful practice that treated both black and white patients. She and her husband owned a large brick house in Jackson Ward, and she was noted for her team of horses. In April 1905, Jones became ill after caring for a patient and died of active cerebral congestion at her Richmond home on May 11, 1905. Following a funeral attended by hundreds of Richmonders, she was buried in the city’s Evergreen Cemetery. In 1922, the Sarah G. Jones Memorial Hospital, Medical College and Training School for Nurses (Richmond Community Hospital after 1945) was named in her honor.