The human remains that came to be known as Jane were discovered by archaeologists at Jamestown in the summer of 2012. They include more than a dozen parts of a single human skull and a shin bone found within what was once James Fort and in a trash deposit associated with a cellar that had been used by colonists as a kitchen. After an initial examination, archaeologists at Preservation Virginia and Historic Jamestowne sent the remains to Dr. Douglas Owsley at the Smithsonian Museum of Natural History in Washington, D.C. He confirmed their suspicions: that these remains demonstrated cannibalism at Jamestown.

Owsley’s report pointed to four cuts on the front of the skull and evidence of butchering in the back. “Examination of the girl’s skull identified multiple chops and cuts from three different sharp, metal implements, such as a knife and cleaver, or small hatchet,” he wrote. “The pattern of blows and cuts reflects a concerted effort to remove soft tissue and the brain. Four chops to the middle forehead represent a tentative, failed attempt to open the cranium. Bone in the back of the head shows a series of deep chops. These forceful blows fractured the cranium along its midline.” The report goes on to outline additional evidence of the skull and shin bone having been butchered for meat. 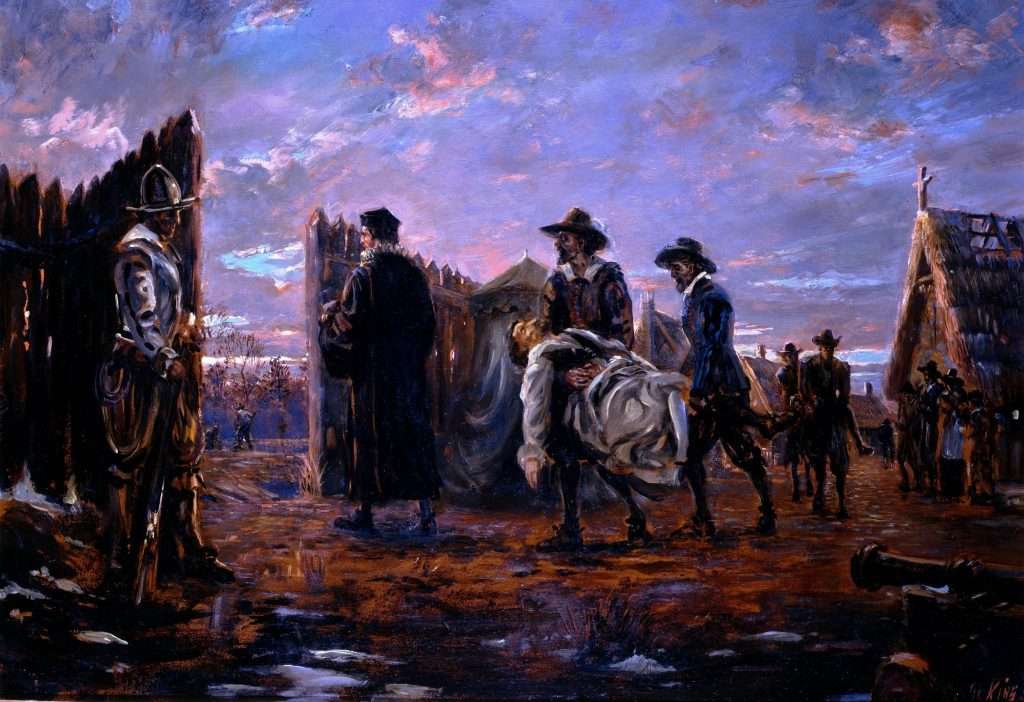 The dating of the remains, as well as where they were found, suggest that the woman died during the Starving Time of 1609–1610. In his book Jamestown: The Truth Revealed (2017), the archaeologist William M. Kelso argues that the combination of archaeology, forensic science, and historical record make for “incontrovertible evidence” of cannibalism at Jamestown.

Scientific testing has concluded that the remains are those of a fourteen-year-old girl, probably from southern England, while the lack of lead signatures suggests that she ate and drank from wooden tableware rather than the pewter preferred by upper-class settlers. Jane may have arrived in Jamestown in August 1609, with a handful of other women. Many of the new settlers were lower class, people the upper-class George Percy described as “unruly gallants” and the colony’s then-president, John Smith, grumbled were “ten times more fit to spoil a commonwealth than either to begin one or but help to maintain one.” Genealogical evidence has suggested at least the possibility that Jane may have been Elizabeth Fields, who in 1606 married Richard Bristow in Sisland, County Norfolk. A similarly named Richard Brislow came to Jamestown as a laborer in 1608, and perhaps his wife joined him a year later.

During the period of Jane’s arrival, a drought had made food scarce, which, in turn, exacerbated tensions between the English settlers and the Virginia Indians. Several bloody confrontations prompted the paramount chief Powhatan to lay siege to James Fort in November 1609, preventing the English men and women from hunting, fishing, or in any other way obtaining outside food. They eventually began to starve, with only about 60 men and women, out of 240, surviving the winter.

Although Jane was somewhat young to have been married, there are five historical references to a wife being killed and eaten by her husband during the Starving Time. For example, Percy, who served as president that winter, wrote that one man “murdered his wyfe Ripped the Childe outt of her woambe and threw itt into the River and after Chopped the Mother in pieces and sallted her for his foode.” A General Assembly report, produced in 1624, echoed that description, adding that the man “fedd uppon her [his wife] till he had clean devoured all partes saveinge her head.” Smith and Sir Thomas Gates also mentioned the incident. While Jane’s remains show no signs of murder, this does not rule out that possibility. She could have been strangled, for instance.

The historian Rachel B. Herrmann has pushed back on the certainty that Jane was the victim of cannibalism, pointing out that there is no way to connect her with the cannibalized wife who appears in documentary sources. “It seems just as plausible to suggest that if Jane was the wife,” Hermmann has written, “she was killed, decapitated, and dismembered so that her husband could eat her share of stored food, as Gates suggested, and that he also mutilated the corpse to make it harder to identify her but not to cannibalize her.”

Whatever the identity of Jane and the exact circumstances of her death, Kelso notes that her remains underscore an important point about Jamestown. “Discovering the truth about the cannibalism stories leaves no doubt exactly how close Jamestown came” to failing, he writes.