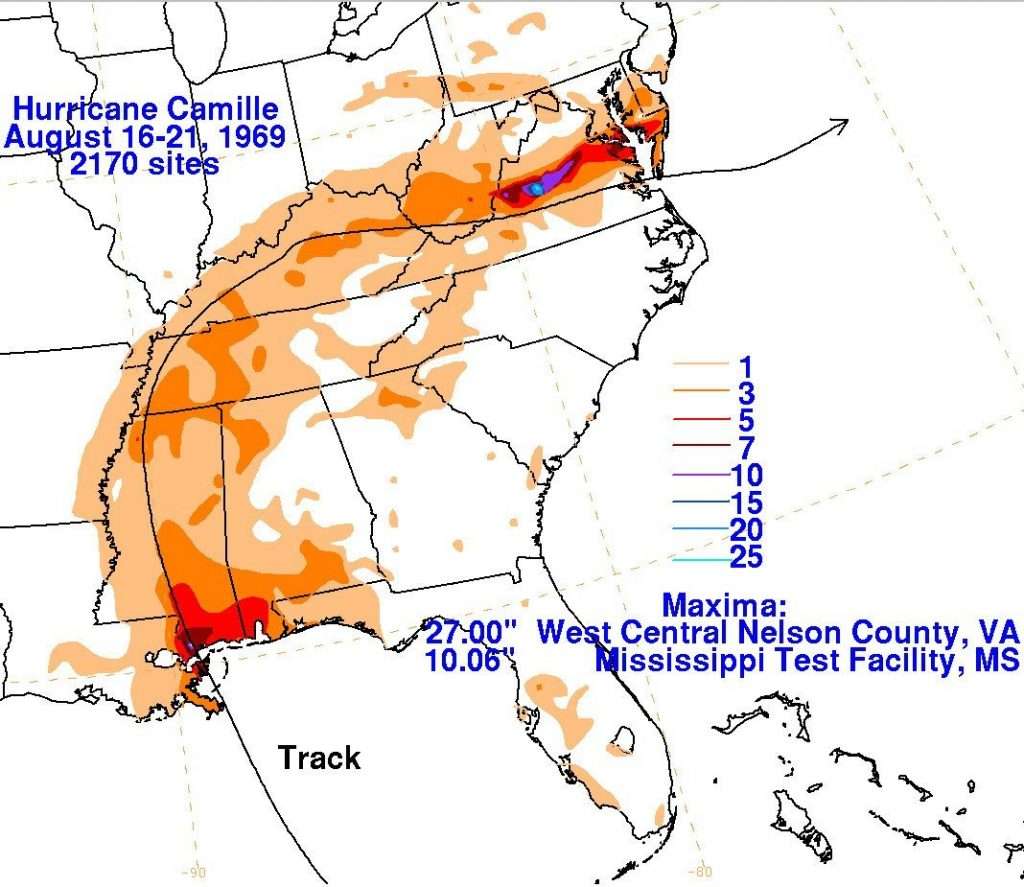 Map Tracking the Path and Precipitation Produced by Hurricane Camille

What started as a tropical depression became Hurricane Camille as it rounded Cuba and entered the Gulf of Mexico. When the storm was one hundred miles from the Gulf Coast, a reconnaissance plane measured central wind speeds at more than 200 miles per hour, well above the 155 miles per hour wind speed required for a category five storm. Making landfall in the Bay Saint Louis area of Mississippi on August 17, the storm was still packing wind speeds of about 170 miles per hour and the surge was twenty-five feet high. Moving up the mouth of the Mississippi, Hurricane Camille killed 143 people in the Gulf Coast region before heading north. Two days later, the storm had significantly diminished in strength, becoming a much weaker tropical depression. On the evening of August 19, Camille appeared to pose little threat to Virginians. To the surprise of forecasters, however, that evening the storm made a sharp turn to the east, leaving Kentucky and heading over the Blue Ridge Mountains of Virginia, where during the night the rain intensified dramatically. 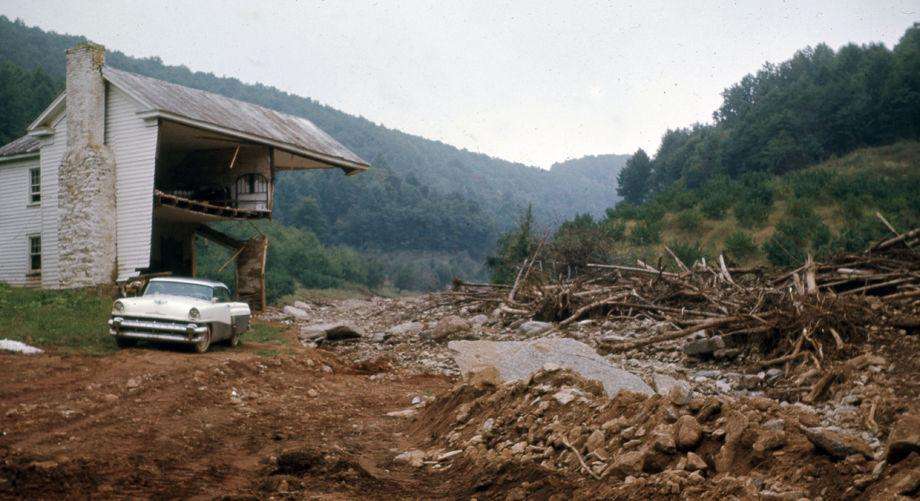 By ten o’clock on the night of August 19, Camille stretched from West Virginia all the way to Fredericksburg, Virginia, and areas to the north and east of the center of the storm were experiencing very heavy rainfall. The rain landed on the eastern slopes of the Blue Ridge Mountains, rapidly swelling creeks and exacerbating the effects of the storm. Overnight, rainfall accumulations were measured at about ten inches between Charlottesville and Lynchburg, with Nelson County receiving the brunt of the storm with at least twenty-seven inches of rainfall. So much rain fell in such a short time in Nelson County that, according to the National Weather Service at the time, it was “the probable maximum rainfall which meteorologists compute to be theoretically possible.”

Recalling the Destruction of Hurricane Camille

This amount of rain in such a short period of time rapidly flooded mountain creeks and streams, creating flash floods and causing landslides. Because the increased intensity of the storm came as a surprise overnight, few residents were warned about the rising waters. The Weather Bureau received one call regarding the prodigious rainfall but otherwise no authorities were alerted to what was happening. As a result, rising waters and landslides caught most Virginia residents in their homes as they slept. The problem was compounded by the fact that area communications were ravaged as the storm progressed, making it impossible for communities to warn their downstream neighbors of what was coming.

On August 20, Camille made its way off the coast of Virginia and out to sea. It left in its path communities devastated by floods and landslides. Virginia counted 124 deaths from the storm and damages totalling $116 million. The majority of the deaths and damage occurred in Nelson County, where flooding along Davis Creek and Huffman’s Hollow surprised residents in rural communities. The storm also swept away more than one hundred bridges in the state and left only a single highway intact. With its tributaries and headwaters receiving the most rainfall, the James River experienced severe flooding all the way through Richmond.

The inland destruction caused by Camille resulted in a rethinking of the planning for natural disasters. Until that time coastal communities were presumed to be at the greatest risk from hurricanes; Camille proved otherwise and prompted the U.S. Congress to pass the Disaster Relief Act of 1969. Hurricane Camille, along with other massive disasters of the 1960s and 1970s, including Hurricanes Carla (1962), Betsy (1965), and Agnes (1972), led to U.S. president Jimmy Carter’s 1979 Executive Order 12127 that merged many separate disaster-related organizations into the Federal Emergency Management Agency. The agency is charged with coordinating recovery efforts after natural disasters in the United States.

In 1970, the Nelson County Chamber of Commerce commissioned Charlottesville Daily Progress associate editor Jerry Simpson and his wife, Paige Shoaf Simpson, to collect stories of Hurricane Camille into a book titled Torn Land. The book holds the accounts of numerous people who were involved in the rescue and recovery efforts following the storm; proceeds of book sales funded the building of a new Nelson County library.

Signs of Hurricane Camille can still be found throughout central Virginia. In 1972, the Virginia Historic Landmarks Commission posted a marker and monument near Woods Mill in Nelson County memorializing the tragedy of Hurricane Camille. James River State Park, which encompasses the confluence of the Tye and James rivers, also commemorates Camille’s force at an overlook point. Just upstream on the James is where some observers claim they saw the river flow backward because of the volume of water Camille forced down the Tye River.

The devastation of Hurricane Camille remains fresh in the memories of many Virginians. Roar of the Heavens: Surviving Hurricane Camille (2006), by Stefan Bechtel, retells the story of Camille. Bechtel was inspired to write a chronicle of the storm when, after moving to Charlottesville twenty years earlier, he began hearing about Camille from local residents. How a hurricane could cause such damage so far inland mystified him, and his curiosity resulted in perhaps the most thorough account of the storm.

In July 2008, a play titled The Bluest Water: A Hurricane Camille Story was produced by the Endstation Theatre Company at the Blue Ridge Summer Theatre Festival. Playwright Jason Chimonedes spent several years collecting stories of Camille from Nelson County residents and then created ten fictional characters to tell the story of the storm and its aftermath.

RELATED CONTENT
Categories:
MAP
TIMELINE
August 17, 1969
Hurricane Camille makes landfall in the United States in the Bay Saint Louis area of Mississippi. The storm packs wind speeds of about 170 miles per hour and a storm surge twenty-five feet high.
August 19, 1969
To the surprise of forecasters, a weak northward-moving Hurricane Camille makes a sharp turn to the east, leaving Kentucky and heading over the Blue Ridge Mountains of Virginia. By ten that night Camille stretches from West Virginia all the way to Fredericksburg, and areas to the north and east of the center of the storm experience heavy rainfall.
August 20, 1969
After leaving twenty-seven inches of rainfall in Nelson County, Hurricane Camille makes its way toward the coast and goes out to sea, leaving in its path 113 deaths from the storm, thirty-nine missing and presumed dead, and damages adding up to $116 million.
October 1, 1969
In the wake of the destruction caused by Hurricane Camille and other natural disasters, the U.S. Congress enacts the Disaster Relief Act of 1969.
1972
The Virginia Historic Landmarks Commission posts a marker and monument near Woods Mill in Nelson County to memorialize the tragedy of Hurricane Camille.
March 31, 1979
As a result of the damage and devastation caused by Hurricanes Carla (1962), Betsy (1965), Camille (1969), and Agnes (1972), President Jimmy Carter issues Executive Order 12127, which merges many separate disaster-related organizations into the Federal Emergency Management Agency (FEMA).
FURTHER READING
CITE THIS ENTRY