Alfred William Harris was born on August 19, 1853, in Fairfax County and was the son of Henry Harris, a free man, and Jemima Magingo Harris, who was likely enslaved. Little is known about his early life, but during the Civil War the family went to Alexandria, where he may have attended a school operated by the Bureau of Refugees, Freedmen, and Abandoned Lands and possibly one of the city’s segregated public schools after 1870. Harris edited the Summer Tribune in Alexandria before joining the editorial staff of the People’s Advocate in April 1876. Three weeks later, he left to study law with a local African American attorney. In February 1880, the Alexandria corporation court admitted Harris to practice law, and the following year he earned his law degree from Howard University, in Washington, D.C.

Early in the 1870s, Harris became involved in local Republican politics, and he served a one-year term on Alexandria’s common council from 1874 to 1875. He was part of a delegation that in May 1875 petitioned President Ulysses S. Grant to reorganize the city’s post office, customs house, and internal revenue office. In April 1880, state Republicans selected Harris as a candidate for presidential elector. That July, he attended a public meeting in Richmond at which many of the city’s leading African Americans issued an appeal to the city school board to hire black teachers for the black schools and to equalize courses of instruction for white and black students. He moved to Petersburg to practice law soon thereafter and was then perhaps the only African American attorney in the city. In Alexandria, on December 31, 1884, Harris married Ida R. Morris, a former public school principal. They had at least five sons and one daughter.

Harris attended a convention of African American Republicans in Petersburg on March 14, 1881, that had been called to decide whether to affiliate with the Readjuster Party. The Readjusters were formed in 1879 to refinance the state’s public debt at a lower rate of interest in order to increase the funds available for the public schools. Harris spoke for a large minority of delegates who opposed the convention’s organizers and the resolutions that the convention passed endorsing the Readjusters.

In October 1881, both factions of the Dinwiddie County Republicans united to nominate Harris for the House of Delegates. He defeated a Democrat by a margin of 855 to 473 in November when the coalition of Republicans and Readjusters won majorities in the General Assembly and all the statewide offices. Harris was reelected three times, all with comfortable margins, and served for eight years. While in the assembly he was a member of the influential Committees on Courts of Justice and on Schools and Colleges and also of the less-prestigious Committees on Immigration, on the Library, on Manufactures and Mechanics Arts, on Public Property, and on Retrenchment and Economy.

Harris introduced several local bills while in the House of Delegates, including one that did not pass in 1882 to forbid the county’s commonwealth’s attorney, sheriff, and treasurer from holding any other offices at the same time. In that same session he introduced a bill that passed to allow a referendum in part of the county to determine whether to exempt that part of the county from the state’s 1866 fence law protecting farmers from damage caused by free-ranging livestock. Harris supported the reform agenda of the Readjuster-Republican coalition, including refinancing the public debt to reduce the interest rate and increase money for the public schools. 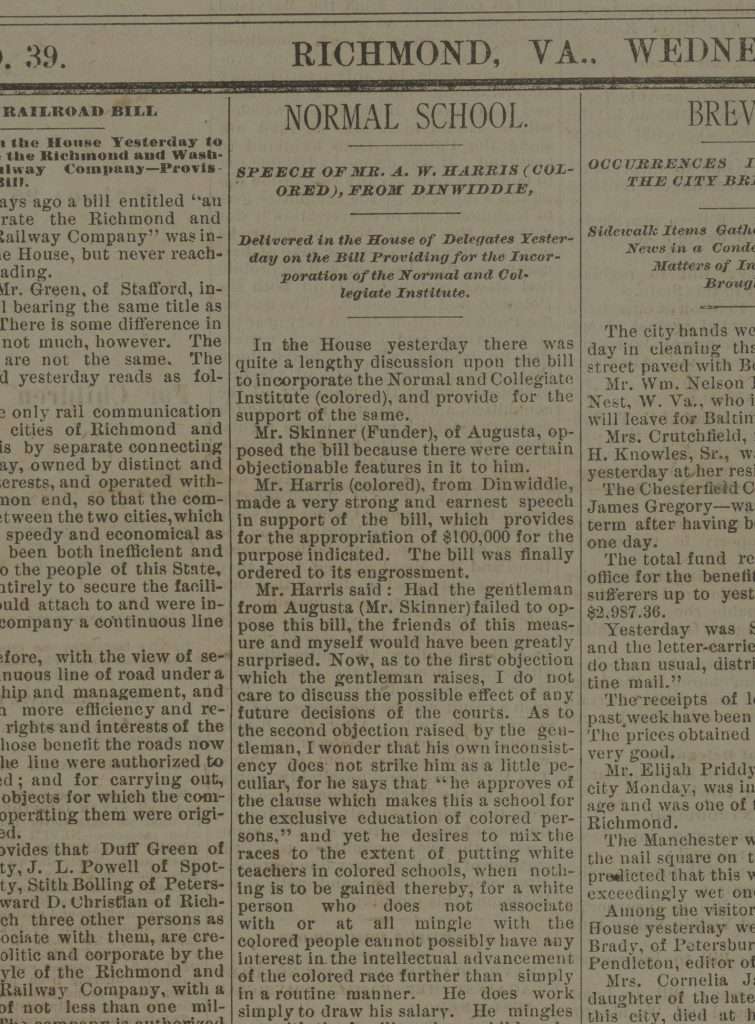 As part of the coalition’s reforms designed to benefit African Americans, Harris introduced the bill in 1882 that chartered the Virginia Normal and Collegiate Institute (later Virginia State University), the state’s first public college for African Americans. Harris sat on the board of visitors and served as its first secretary. Acting as the de facto treasurer during the initial months of the school’s operation in 1883, Harris was accused of fiscal improprieties but later exonerated. Two years later, however, financial mismanagement, excessive salaries, and poor oversight of building construction spurred the removal of the board, and Harris was not reappointed. In January 1886, after the Democrats had regained control of the assembly, he helped engineer the assembly’s passage of a bill to incorporate the Colored Agricultural and Industrial Association of Virginia to sponsor an annual state fair for African Americans. He was elected its president in November 1886, and as a trustee purchased property in Dinwiddie County for the organization in 1888.

Harris remained loyal to Mahone even as the Republican Party faced division. At the state convention in May 1888, he reportedly exchanged blows with Matt N. Lewis, a Petersburg editor who favored a rival Republican faction. That autumn, Harris campaigned throughout the Fourth Congressional District for Richard W. Arnold, a white Republican who ran for the House of Representatives with Mahone’s support. He was opposed by Edward C. Venable, a Democrat, and by John Mercer Langston, an African American Republican. The Republican split led to Venable’s victory, but Langston successfully challenged the result. When evidence of corruption in the election was compiled in 1889, Harris testified that Langston’s supporters had prevented him and other canvassers from speaking at Arnold’s campaign rallies. Early the next year, as spokesman for a small group of Virginia Republicans, Harris testified before, and also submitted a written statement to, a congressional committee that described how election officials in the state, most of whom were Democrats, had evaded voting laws and disfranchised about 30,000 African Americans.

On February 1, 1889, Harris led a delegation to petition Benjamin Harrison, the president-elect, to place Mahone in the cabinet. Harris did not run for reelection to the House of Delegates in 1889, probably because he was appointed special inspector of customs at Newport News that August, a prominent office for an African American in the state. A few weeks later he attended the local Republican convention in Sussex County, where he backed one candidate and then scuffled with a supporter of a rival claimant. His opponent even fired a pistol, possibly aimed at Harris.

In December 1905, Harris was arrested in Petersburg and charged with conspiring with another African American to have the latter steal two bales of cotton and sell one to a commission merchant. Harris adamantly denied the charges, which were based solely on the testimony of his supposed accomplice, and was acquitted by the mayor’s court. The commonwealth’s attorney failed in his attempt to pursue the case in the Hustings Court. Despite being cleared of the charges, by December 9, Harris had resigned from his post in the internal revenue office. In June 1912, he was arrested again, this time on a charge by an accomplice of orchestrating the theft of a whiskey still. Finding no corroborating evidence besides the accusation of his supposed co-conspirator, the charges were dismissed several days later.

Having suffered a stroke that left him incapacitated for about two years, Harris died of arteriosclerosis and a cerebral hemorrhage at his Petersburg home on March 24, 1920. He was buried with Masonic rites in the city’s Blandford Cemetery.