Harland was born Mary Virginia Hawes in Dennisville, Virginia, in Amelia County, in 1830 and spent her early years in rural areas before moving to Richmond when she was in her early teens. She married Edward Payson Terhune in 1856 and moved to Newark, New Jersey, in 1859, when her husband, a Presbyterian minister, was given a pastorate there. She spent most of the rest of her life in the North, and died in New York in 1922.

Harland began to write as a child, and at age fifteen, using a male pseudonym, she submitted stories to The Watchman and Observer, a religious magazine published in Richmond. She sent other stories to different magazines, eventually choosing the name “Marion Harland,” under which she wrote for the rest of her life. Her first novel, Alone (1854), was privately published when she was twenty-four; the book was instantly popular. She went on to publish more than seventy-five volumes, and her short stories were published in some of the leading magazines of her day, earning her an award for her writing as early as 1853. She wrote a syndicated newspaper column for women for more than eighteen years, and edited several publications for short periods. Harland’s last novel, The Carringtons of High Hill, was published in 1919, when she was eighty-eight.

Harland’s novels were written over the course of more than sixty-five years, including the turbulent period before, during, and after the American Civil War (1861–1865). As a native Southerner who followed her husband to live in the North, Harland’s loyalties were sorely divided during the war, though she emphatically disapproved of secession. These inner conflicts were often expressed in her fiction. Her earlier novels portrayed Virginia as an idyllic place, and its inhabitants as paragons of virtue and conduct, coexisting peacefully in a near utopia. A later novel, Sunnybank (1866), describes the many privations and dangers of wartime Virginia, and begins to explore the conflicts in Southern society at that time. In some of her later novels, which are set in the North, she continued to focus on providing good moral lessons through her fiction. 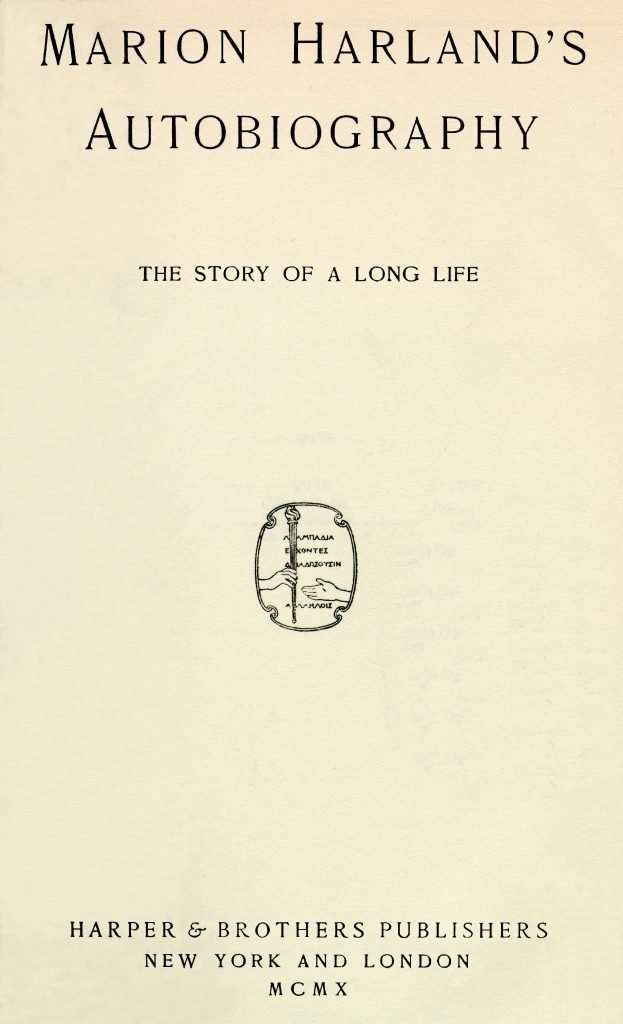 Marion Harland’s Autobiography: The Story of a Long Life

During Harland’s first months in Newark, struggling for the first time with household tasks such as cooking and cleaning, she realized there was a serious need for detailed, practical manuals for maintaining a household. Her response to that need, published in 1871, was Common Sense in the Household: A Manual of Practical Housewifery. Described by one author as “enlivened with pungent commentary,” the book sold more than a million copies and was kept in print for the next fifty years. Through this book and others of its kind that followed, Marion Harland became a household name.

Her works on cooking, housekeeping, and etiquette all celebrate “the talent of home-making, precious and incommunicable,” as she described it in The Secret of a Happy Home (1896). Though Harland made it clear that women were duty-bound to keep a well-ordered home, she also recognized and lamented the limitations placed on women. “It must be a fine thing,” she wrote, “to be a man on some accounts;—to be emancipated forever-and-a-day from the thralldom of skirts for instance, and to push through a crowd to read the interjectional headlines upon a bulletin board, instead of going meekly and unenlightened home.” In the face of these challenges, however, Harland urged her readers to develop their other talents and their intellects.

Eminently practical, witty, sarcastic, encouraging and kind, Harland’s manuals were a boon to women throughout the country. Common Sense, for instance, includes instructions for common household problems, such as removing stains or making a wound stop bleeding (“cobwebs and brown sugar, pressed on like lint”), as well as scores of recipes.

Some of Harland’s other works include books based on extensive travel in Europe and the Middle East, biographies of Mary Washington and British novelist Charlotte Brontë, and histories of colonial America. She also collaborated on various writing projects with each of her three surviving children, including her son, Albert Payson Terhune, best known as the author of Lad: A Dog (1957), and other works.

RELATED CONTENT
Categories:
Type:
Related SOLs:
MAP
TIMELINE
1830
Marion Harland is born Mary Virginia Hawes in Dennisville.
1854
Marion Harland's first novel, Alone, is privately published and achieves immediate success.
1856
Marion Harland marries Edward Payson Terhune, a Presbyterian minister.
1859
Marion Harland moves to Newark, New Jersey, when her husband is given a pastorate.
1871
Marion Harland publishes Common Sense in the Household: A Manual of Practical Housewifery, her response to a need for literature offering detailed tips on maintaining a household as a young wife. The book sells more than a million copies and is kept in print for the next fifty years.
1919
Marion Harland's last novel, The Carringtons of High Hill, is published. She is eighty-eight.
FURTHER READING
CITE THIS ENTRY