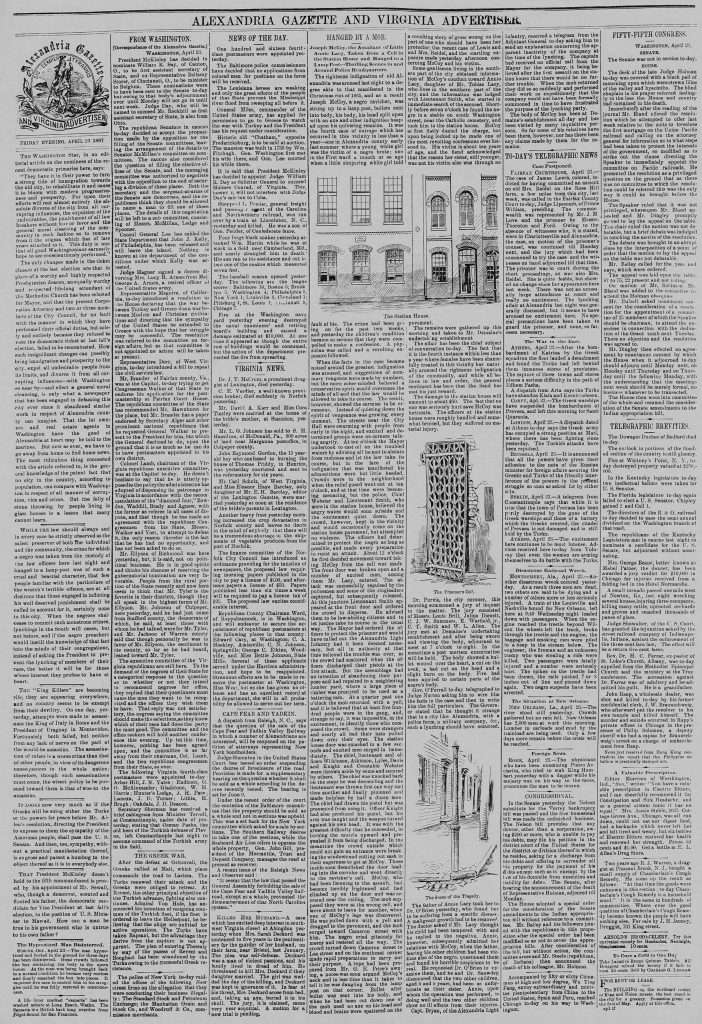 HANGED BY A MOB.

Joseph McCoy, the Assailant of Little Annie Lacy, Taken from a Cell in the Station House and Hanged to a Lamp Post—Thrilling Scenes in and Around Police Headquarters.

The righteous indignation of old Alexandria was aroused last night to a degree akin to that manifested in the Christmas riot of 1865, and as a result Joseph McCoy, a negro ravisher, was strung up to a lamp post, bullets sent into body, his body, his head split open with an axe and other indignities heaped upon his quivering remains. It was the fourth case of outrage which has occurred in this vicinity in less than a year—one in Alexandria county early last summer where a young white girl was the victim of a negro brute; one in the First ward a month or so ago when a little simp[e]ring white girl told a revolting story of gross wrong on the part of one who should have been her protector; the recent case of Lewis and Mrs. Reidel, and the startling exposure yesterday afternoon concerning McCoy and his victim.

Some gentlemen living in the southern part of the city obtained information of McCoy's conduct toward Annie Lacy, daughter of Mr. Tobias Lacy, who lives in the southern part of the city, and the information was lodged with Lieutenant Smith, who started in immediate search of the accused. Shortly before seven o'clock he found the negro in a stable on south Washington street, near the Catholic cemetery, and took him to the station house. McCoy at first flatly denied the charge, but upon being locked up he made one of the most revolting confessions ever listened to. His victim is about ten years of age, and the fiend acknowledged that the reason her sister, still younger, was no his victim also was through no fault of his. The crime had been going on for the past two weeks, and yesterday the children's condition became so serious that they were compelled to make a confession. A physician was called and a revolting exposure followed.

When the facts in the case became noised around the greatest indignation was aroused, and suggestions of summary vengence [sic] were made by numbers, but the more sober-minded believed a conservative spirit would overcome the minds of all and that the law would be allowed to take its course. The result, however, showed the surmise to be erroneous. Instead of quieting down the spirit of vengeance was growing every moment. The streets near the City Hall were swarming with people from early in the night, and excited and determined groups were on corners talking angrily. At ten o'clock the Mayor undertook to cast oil on the troubled waters by advising all he met to abstain from rashness and let the law take its course, but in the face of the indignation that was manifested his admonitions were but little heeded. Crowds were in the neighborhood when the relief guard went out at ten o'clock, and at that time were become menacing, but the police, Chief Webster and Lieutenant Smith, who were in the station house, believed the angry waves would soon subside and the excitement quiet down. The crowd, however, kept in the vicinity and would occasionally come on the station house pavement, but attempted no violence. The officers had determined to protect the negro as long as possible, and made every preparation to resist an attack. About 12 o'clock he first decided movement toward taking McCoy from the cell was made. The front door was broken open and a number of excited men, among them Mr. Lacy, entered. The attack was successfully repulsed by the policemen and some of the ringleaders captured, but subsequently released. At this juncture Lieutenant Smith appeared at the front door and ordered the crowd to disperse. He advised them to be law-abiding citizens and to let justice take its course in the usual way. The Mayor had ordered the officers to protect the prisoner and would have called out the Alexandria Light Infantry had it been deemed necessary, but all in authority at that time believed the trouble was over, as the crowd had scattered when the officers discharged their pistols at the first attack. But the assemblage had no intention of abandoning their purpose and had repaired to a neighboring lumber yard, where a large piece of timber was procured to be used as a battering ram. At a quarter past one o'clock the mob returned with a yell, and it is believed that at least five hundred people were in the gang, and, strange to say, it was impossible, in the excitement, to identify those who composed the crowd. Some were strangers and nearly all had their hats pulled down over their eyes. The station house door was smashed in a few seconds and excited men surged in immediately. The chief, lieutenant and officers Wilkinson, Atkinson, Lyles, and Davis and Knight and Constable Webster were thrown aside by some and secured by others. The chief was knocked back on the steps he was descending and the lieutenant was thrown first one way and then another and finally pinioned and made helpless by half a dozen men. The chief had drawn his pistol but was prevented from using it. Officer Knight had also produced his pistol, but his arm was caught and the weapon turned against his own head. It was with the greatest difficulty that he succeeded in turning the muzzle upward and prevented it from being discharged. In the meantime the crowd outside which could not gain an entrance were breaking the windows and cutting out sash in their eagerness to get at McCoy. Those inside soon demolished the door leading into the corridor and went directly to the ravisher's cell. McCoy, who had been listening to the assault, had become terribly frightened and had climbed up on the door and was secreted near the ceiling. The mob supposed they were at the wrong cell, and were about to leave for another, when one of McCoy's legs was discovered. He was pulled down with a yell and dragged to the pavement, and the mob surged toward Cameron street with him. The negro cried piteously for mercy and resisted all the way. The crowd turned down Cameron street to Lee street on the southeast corner made rapid preparations to carry out their purpose. A rope had been procured from Mr. G. E. Price's awning, a noose was soon around McCoy's neck and in less time than it takes to tell it he was dangling from the lamp post on that corner. Bullet after bullet was sent into his body, and when he had been cut down one of the mob used an axe on his head and blood and brains were spattered on the pavement.

The remains were gathered up this morning and taken to Mr. Demaine's undertaking establishment.

The affair has been the chief subject of conversation to-day. The fact that it is the fourth instance within less than a year where females have been shamefully treated in this vicinity has naturally aroused the righteous indignation of the community, and while all believe in law and order, the general sentiment has been that the fiend has met his just reward.

The damage to the station house will amount to about $50. The fact that no one was seriously hurt save McCoy was fortunate. The officers at the station house were roughly handled and somewhat bruised, but they suffered no material injury.

Dr. Purvis, the city coroner, this morning summoned a jury of inquest in the matter. The jury consisted of Messrs. Louis Brill, Julius Dienelt, C. J. W. Summers, E. Warfield, jr., C. T. Smith and W. L. Allen. The jury met at Demaine's undertaking establishment and after being sworn and viewing the body, adjourned to meet at 7 o'clock to night. In the meantime a post mortem examination will be held. The body showed a bullet wound over the heart, a cut on the neck, a bad cut on the head and a slight burn on the body. Fire had been applied to certain parts of the negro's body.

Gov. [Charles T.] O'Ferrall to-day telegraphed to Judge Norton asking him to wire him the facts in the case and then to write him the full particulars. The Governor stated that he thought it strange that in a city like Alexandria, with a police force, a military company, &c., such a lynching should have occurred.

The father of Annie Lacy took her to Dr. O'Brien yesterday, who found her to be suffering from a specific disease. A malignant growth had to be removed. The doctor asked if Mr. Lacy thought his child had been tampered with and he replied in the negative. Annie, however, subsequently admitted her relations with McCoy, when the father, fearing his other children had been victims also of the negro, questioned them and found his horrible suspicions to be real. He requested Dr. O'Brien to examine them, and he and Dr. Snowden discovered that the two other children, aged 6 and 8 years, had been unfortunate as their sister. Annie, upon whom the operation was performed, is doing well and the two other children show no ill effects from their injuries.

Capt. Bryan, of the Alexandria Light Infantry, received a telegram from the Adjutant General t-day asking him to send an explanation concerning the apparent inactivity of the company at the time of the lynching. The captain had received no official call from the Mayor for the company, it being believed after the first assault on the station house that there would be no further trouble. When the mob returned they did so so suddenly and performed their work so expeditiously that the company could not have been formally summoned in time to have frustrated the purpose of the lynching party.

The body of McCoy has been at Demaine's establishment all day and has been visited by many inquisitive persons. So far none of his relatives have been there, however, nor has there been any claims made by them for the remains.