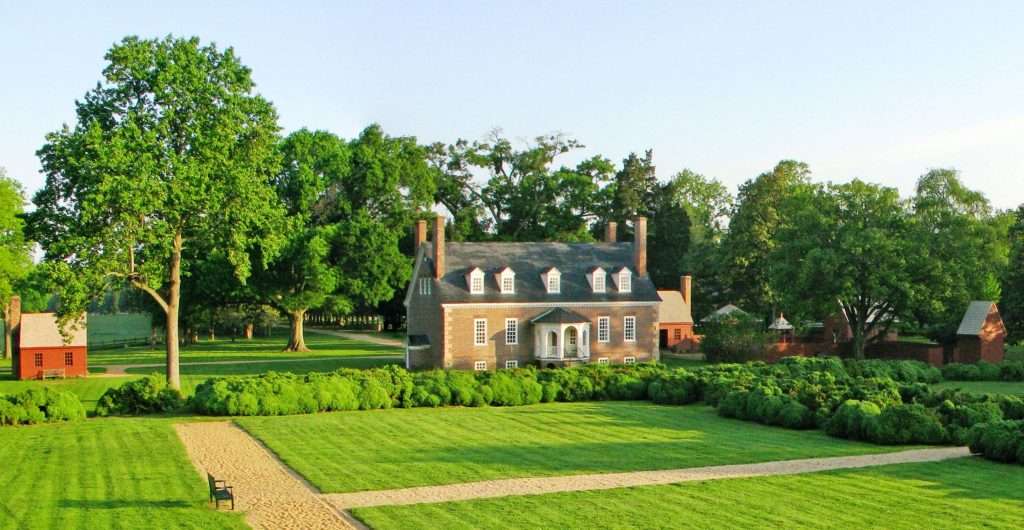 South Side of Gunston Hall

George Mason inherited the land on which Gunston Hall is located after his father, a successful Chesapeake Bay planter, drowned crossing the Potomac in 1735. Mason’s Virginia estate comprised about 5,000 acres on a stubby peninsula that jutted into the river. Called at one time Dogue’s Neck, after a local Indian tribe, it later became known as Mason’s Neck. Eight miles south of George Washington‘s Mount Vernon, Gunston Hall was four miles west of the King’s Highway, in the eighteenth century a major north-south thoroughfare. Mason’s son John Mason years later recalled Continental army officers and other “travelers of distinction” availing themselves of his father’s hospitality. 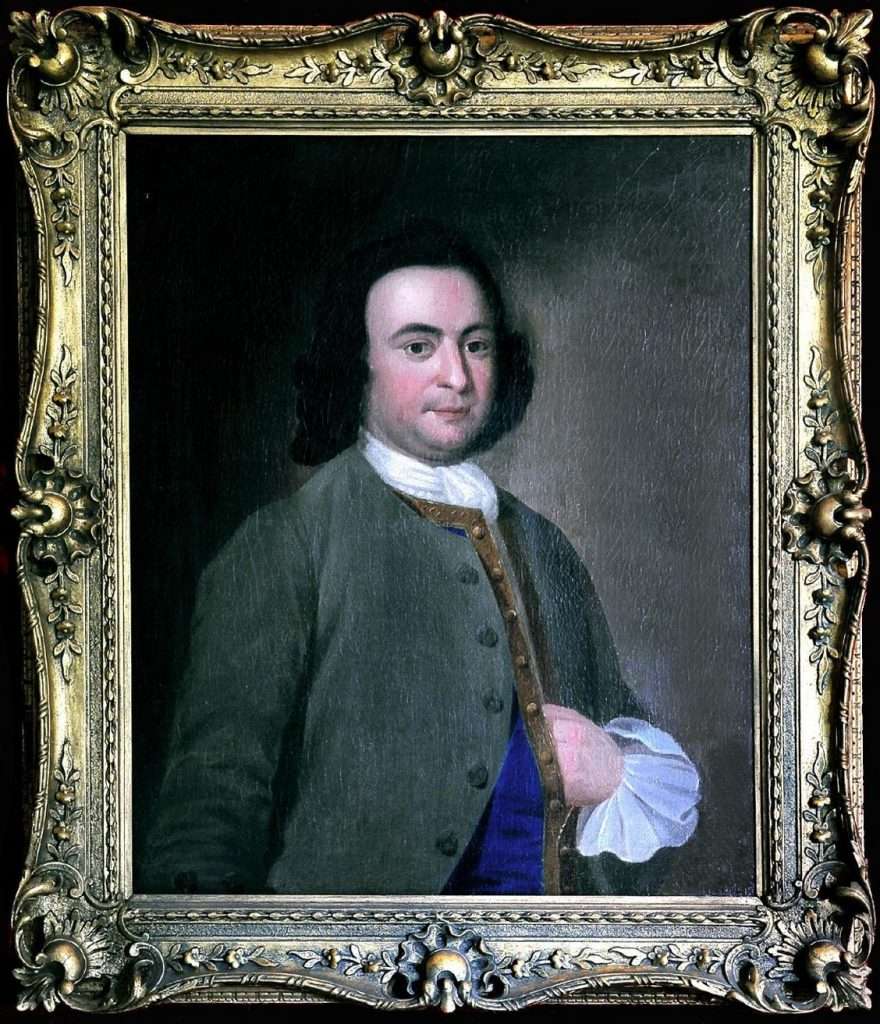 Mason married Ann Eilbeck of Maryland in 1750; the couple would have nine children who survived to adulthood. To accommodate his growing family, Mason began construction of Gunston Hall in 1754. He surveyed the land himself and selected a site about 300 yards southwest of New Town, an earlier Mason family residence. The name “Gunston Hall” apparently originated with the country seat of a maternal ancestor, Gerard Fowke of Staffordshire, England, and was borrowed by a later Gerard Fowke for his Charles County, Maryland, plantation. Mason’s Gunston Hall was one of the region’s first brick homes. Enslaved workers made the bricks for the home’s exterior and then helped a skilled mason arrange them in a Flemish bond pattern. The bricks are anchored by sandstone cornerstones from the nearby Aquia Creek quarry. The house had two chimneys at each end; ten dormer windows in the front and rear provided light to the second floor. A porch on the landward side combined Doric Greek and Italian Palladian designs. On the opposite side of the house an even more ornate porch faced a large formal garden and, beyond it, the Potomac River.

The shell of Gunston Hall was probably complete by the time Mason’s brother Thomson Mason, apparently acting at Mason’s request, hired the English craftsman William Buckland to assume the “entire Direction of the Carpenter’s and Joiner’s work of a large house,” as Mason later wrote. Thomson Mason was in London at the time studying law at the Inns of Court; Buckland signed an indenture agreement with him on August 4, 1755. Buckland was promised transportation to America, provisions, lodging, and a yearly salary of twenty pounds sterling. In Virginia, Buckland drew on the full range of the English rococo style and reinterpreted common architectural motifs to design the intricate carvings for which Gunston Hall became famous. Another indentured English artisan, William Bernard Sears, did most of the actual woodwork. Buckland left Gunston Hall in November 1759, and went on to become one of the best-known architects in colonial America, designing notable public buildings and private homes in Virginia and Maryland before his death in 1774 at age forty.

Visitors arriving from the King’s Highway approached Gunston Hall down a carriage path bordered on each side by a row of cherry trees. Mason designed the plantings so that, from the middle of his doorway, a guest saw only the first tree in each row. A large central hallway, showing French and neoclassical influences, ran the length of the first floor, and a dramatic pineapple pendant hung above the stairway. To the right was a formal dining room painted a bright yellow ochre with chinoiserie details. Chinoiserie, a Chinese style popular in Great Britain in the 1700s, was virtually unknown in America. Pilasters with intricate entablatures encased windows, doors, and recessed cabinets on either side of a fireplace. The mantel was made of imported marble. The woodworking included pagoda-like moldings and canopies where Chinese vases or figurines could have been displayed. 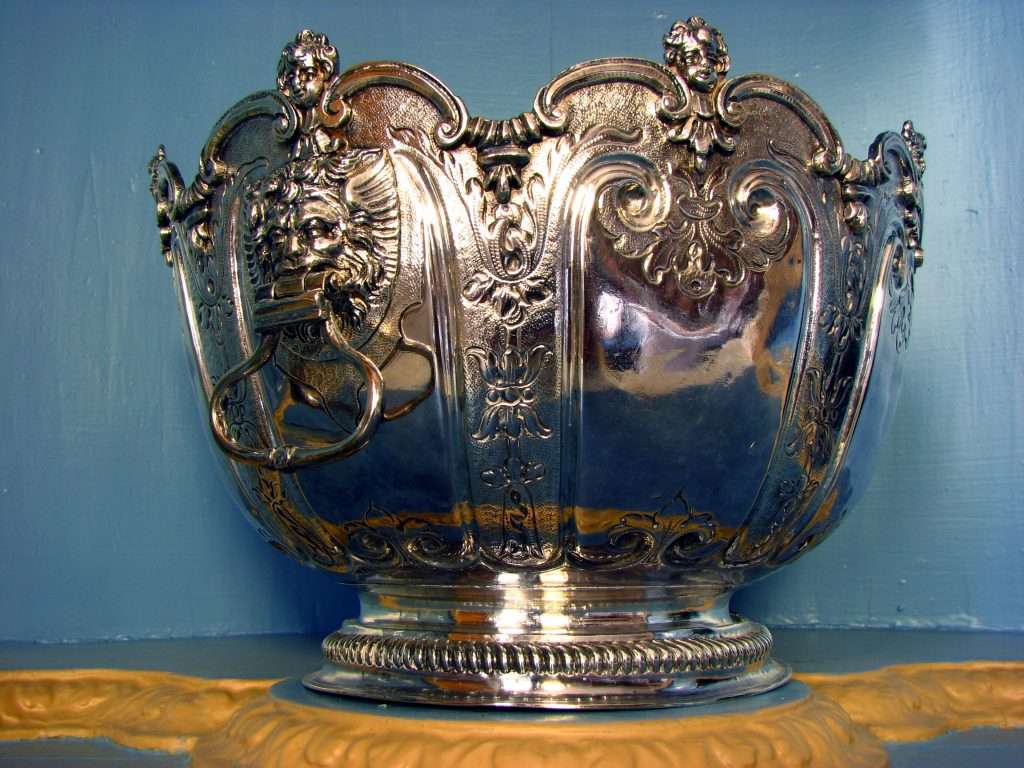 The main hallway and all the downstairs rooms had pocket shutters. The dining room opened onto a strikingly formal and elegant Palladian-style room. Broken pediments topped the fireplace and two built-in cabinets, or beaufats, flanked the fireplace. The Palladian room’s many expensive features included rococo woodwork, matched blind-doweled floor planks, a carved egg-and-dart pattern around the panels of the room’s black walnut doors, and furniture that Buckland and Sears had made especially for the Masons’ use.

Across the hall was a more private space Mason called “the Little Parlor.” A simply furnished room painted a neutral gray, it served as an informal family dining room and as Mason’s office. As was then common, the master bedroom, or chamber, was also on the first floor. John Mason remembered the room for a tall chest of drawers where his mother, Ann Mason, kept the children’s clothes and for two closets on either side of the fireplace. She used one closet as a pantry where she stored valuables and delicacies. She also kept in the bedroom a green leather riding crop she used to discipline the children; they called it “the green doctor.” As an adult, John Mason reminisced that “the household establishment at Gunston Hall was conducted with great regularity & system” when his mother was alive. Several years after Ann Mason’s death, George Mason painted the room a then-stylish deep green.

Gunston Hall’s second floor did not duplicate the floor plan of the first floor, which is somewhat unusual among large houses of the time. A hallway running the width of the house split the upstairs. Other than three arches at the top of the stairs, the second floor lacked any architectural flourishes. There were seven bedrooms, a separate staircase for enslaved workers and servants, and a storage room, or “lumber room” in the language of the period. It was illuminated by an interior “robber” window that drew sunlight from an exterior light above the stairwell.

skilled artisans may have worked in individual sheds. Mason shipped tobacco to Europe from his own dock along the Potomac. He employed paid laborers and indentured servants and enslaved about one hundred people. Mason’s will mentioned forty-five enslaved workers by name. A community of enslaved people, called Log Town, stood at some distance from the plantation house.

Mason died quietly at Gunston Hall on October 7, 1792. The house stayed in the Mason family until 1867, when William Merrill and William Dawson purchased it from the widow of one of George Mason’s grandsons. In 1949, after passing through a series of private owners, Gunston Hall was acquired by the Commonwealth of Virginia as a gift from the Louis Hertle family. The house was opened to the public and is operated as a historic site by regents from the National Society of the Colonial Dames of America. Most of Gunston Hall’s eighteenth-century furnishings have disappeared over the years, but time has not erased Gunston Hall’s most distinctive features, and impressive efforts have been made to restore the building and grounds. Today, its magnificent woodwork remains intact, along with about 550 acres of the original estate. George Mason’s home serves as a monument to a sometimes forgotten founder and as an impressive example of colonial architecture and interior design.

RELATED CONTENT
Categories:
MAP
TIMELINE
March 1735
George Mason's father, a successful Chesapeake Bay planter, drowns crossing the Potomac River. As the eldest son, ten-year-old George inherits 5,000 acres on a peninsula called Dogue's Neck.
April 4, 1750
George Mason marries Ann Eilbeck, the daughter of William Eilbeck and Sarah Edgar Eilbeck. William Eilbeck is a wealthy planter and merchant in Charles County, Maryland.
1754
George Mason orders the construction of Gunston Hall on a site about 300 yards southwest of New Town, an earlier Mason family residence. Mason is motivated by his growing family to build the house.
August 4, 1755
English craftsman William Buckland signs an indenture agreement with Thomson Mason, brother of George Mason, to oversee ongoing work at Gunston Hall.
1759
Enslaved and paid workers complete George Mason's elegant mansion, Gunston Hall, on Dogue's Neck. Noted architect William Buckland has designed the interior, and Gunston Hall will remain Mason's home for the rest of his life.
October 7, 1792
George Mason dies at Gunston Hall, his Fairfax County home.
1867
Ownership of Gunston Hall passes out of the Mason family when the widow of George Mason VI sells the house to William Merrill and William Dawson. Between 1867 and 1949, the house passes through a series of private owners.
1949
The Louis Hertle family donates Gunston Hall to the Commonwealth of Virginia. The house is to be opened to the public and administered by regents from the National Society of the Colonial Dames of America.
Autumn 1990
The Gunston Hall Plantation staff begins a room use study in an effort to make the house a better reflection of the Gunston Hall of George Mason's day.
FURTHER READING
CITE THIS ENTRY