Green was born enslaved in Petersburg probably late in the 1830s. He was the son of Amos Green and Gracie Green. Little is known about his early life and he most likely gained his freedom at the end of the Civil War. The 1870 census recorded him as thirty-two years old and living in Petersburg with a woman name Susan Green, probably his wife. He reported to the enumerator that he worked in a tobacco factory, that he was literate, and that he held $150 in real estate property. The previous year he had acquired, with a woman named Rebecca Peniston, a lot on Rome Street. They worked together again in 1875, with Green acting as trustee for the remarried Rebecca Patterson and her children. He also co-owned at least two lots in the city, later purchasing one outright. Petersburg city directories in the mid-1870s listed Green as a grocer.

Green entered politics by 1880 when a coalition of Conservatives and Republicans nominated him as a candidate to be one of the city’s justices of the peace. He was not elected, and by the next year he had become a member of the Readjuster Party, a biracial coalition that advocated refinancing the state’s payments on its large antebellum public debt in order to fund the new public school system adequately. On November 8, 1881, Petersburg voters elected Green as one of the city’s two representatives in the House of Delegates. He and fellow Readjuster David F. May, who became superintendent of the Central Lunatic Asylum (later Central State Hospital) the following year, received 1,989 and 2,100 votes, respectively, out of 6,678 votes cast. When the assembly session began in December, Green was appointed to the Committees on Finance, on Counties, Cities, and Towns, and on House Expenses. That month, he was among those who voted to elect Readjuster Harrison H. Riddleberger to the U.S. Senate.

Green took an active role in the Readjuster-controlled House of Delegates during the 1881–1882 session. He introduced routine motions, offered bills to incorporate local organizations and businesses, and nominated successful candidates for judges in Petersburg and on the Virginia Supreme Court of Appeals. He also proposed an unsuccessful bill to repeal the sections of the criminal code that outlawed interracial marriage. Green voted to establish the Virginia Normal and Collegiate Institute (later Virginia State University), and during the General Assembly’s extra session, he presented a bill authorizing the Petersburg common council to purchase land for the institution. Ultimately, the new college was built in nearby Ettrick, in Chesterfield County. He was named to the school’s board of visitors on July 28, 1885, to fill a short-term vacancy resulting from the dismissal of the previous board for financial irregularities, and Green served as treasurer until a new board was appointed by the Democratic majority in March 1886.

In the autumn of 1883, Green announced his candidacy for reelection. On September 22, Petersburg’s black newspaper, the Lancet (later the Afro-American Churchman), strongly endorsed his candidacy, stating that “the people need not fear” as long as he represented the city. On November 6, 1883, Green and the Readjuster Robert McCandlish tallied 2,182 and 2,266 votes, respectively, out of 8,282 votes cast, to win election to the House of Delegates. 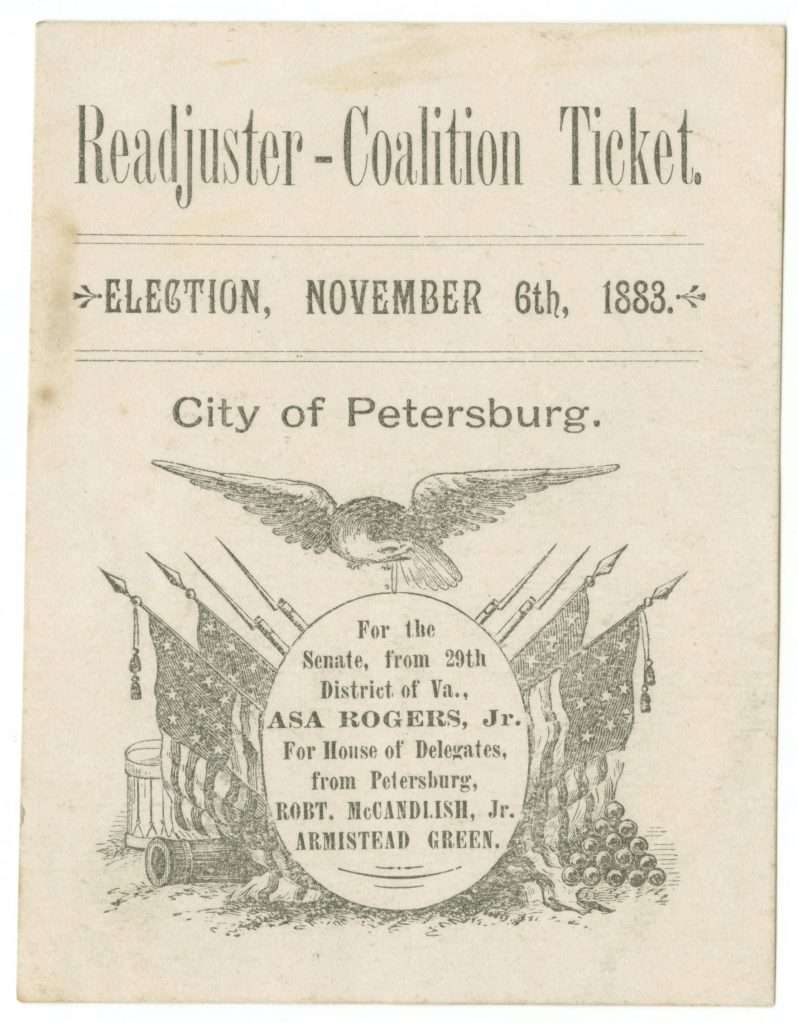 Despite this success, Green’s margin of victory declined sharply from the previous election and a revived Democratic Party regained control of the General Assembly. Without a Readjuster majority he did not have as many opportunities to contribute and was appointed to the lowest-ranking seats on the Committees on Claims, on Executive Expenditures, and on Federal Relations and Resolutions. During legislative debate on state provision for convict labor to extend the Danville and New River Railroad, he did successfully amend the bill to prohibit using an inmate’s race as a basis for selecting track laborers.

In February 1884 Green took on racism within his own party. When the Readjuster congressmember John S. Wise told a congressional committee that he met with African American state legislators in the backyard rather than in his parlor, he faced a wave of disdain from black members of the assembly. Green’s condemnation received nationwide attention when the New York Sun (February 29, 1884) quoted him as telling fellow delegates, “I say to Mr. Wise, as I do to the white population of this country, that he never wants to use colored people for nothing but their votes. I never expect to visit him in his parlor or in his kitchen or in his stable.” Wise amended his testimony to the committee less than a week later, saying it was misunderstood and blaming the press for purposefully misleading the public. Green did not seek reelection to the assembly in 1885.

On December 24, 1884, Green, by then a widower, married Rebecca Banister. He continued his grocery operation and by 1888 had also ventured into the mortuary business with a partner. From May 1884 to December 1885 Green was a partner in a brick manufacturing company. He and another investor won a chancery suit case against a third investor to recover business debts. Green may have been a member of the Petersburg police corps. By 1892 he was married for a third time to a woman named Lucy, whose surname is not known. On March 6, 1892, Green died at his home in Petersburg of Bright’s disease. His place of burial is not known.

On April 1, 1892, an obituary in the Detroit, Michigan, Plaindealer described him as “one of the best known” African American men in Virginia.