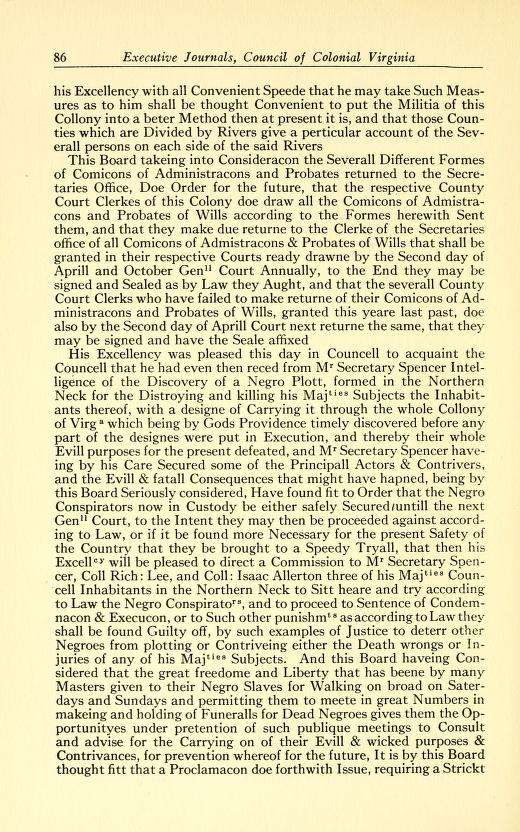 Executive Journals of the Council of Colonial Virginia, Volume 1, Page 86

His Excellency was pleased this day in Councell to acquaint the Councell that he had even then reced from Mr Secretary Spencer Intelligence of the Discovery of a Negro Plott, formed in the Northern Neck for the Distroying and killing his Majesties Subjects the Inhabitants thereof, with a designe of Carrying it through the whole Collony of Virga which being by Gods Providence timely discovered before any part of the designes were put in Execution, and thereby their whole Evill purposes for the present defeated, and Mr Secretary Spencer haveing by his Care Secured some of the Principall Actors & Contrivers, and the Evill & fatall Consequences that might have hapned, being by this Board Seriously considered, Have found fit to Order that the Negro Conspirators now in Custody be either safely Secured untill the next Generall Court, to the Intent they may then be proceeded against according to Law, or if it be found more Necessary for the present Safety of the Country that they be brought to a Speedy Tryall, that then his Excellency will be pleased to direct a Commission to Mr Secretary Spencer, Coll Rich: Lee, and Coll: Isaac Allerton three of this Majesties Councell Inhabitants in the Northern Neck to Sitt heare and try according to Law the Negro Conspirators, and to proceed to Sentence of Condemnacon & Execucon, or to Such other punishments as according to Law they shall be found Guilty off, by such examples of Justice to deterr other Negroes from plotting or Contriveing either the Death wrongs or Injuries of any of this Majesties Subjects. And this Board haveing Considered that the great freedome and Liberty that has beene by many Masters given to their Negro Slaves for Walking on broad on Saterdays and Sundays and permitting them to meete in great Numbers in makeing and holding Funeralls for Dead Negroes gives them the Opportunityes under pretention of such publique meetings to Consult and advise for the Carrying on of their Evill & wicked purposes & Contrivances, for prevention whereof for the future, It is by this Board thought fitt that a Proclamacon doe forthwith Issue, requiring a Strickt 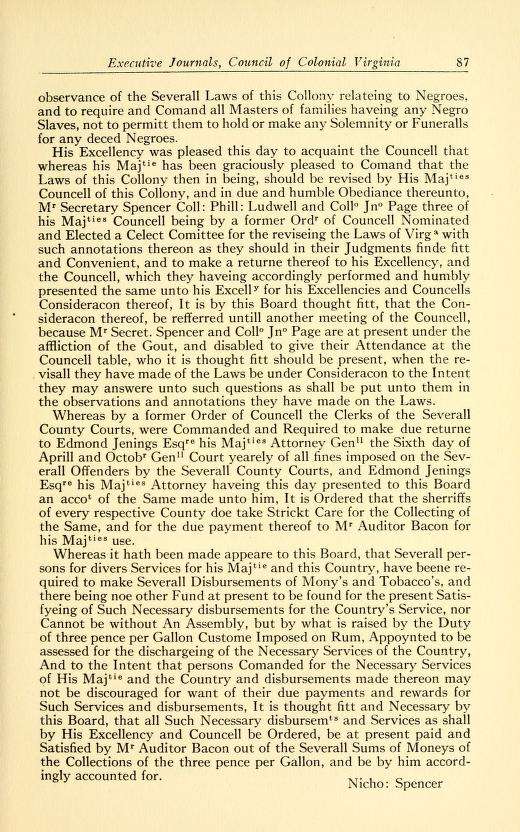 Executive Journals of the Council of Colonial Virginia, Volume 1, Page 87

observance of Severall Laws of this Collony relateing to Negroes, and to require and Comand all Masters of families having any Negro Slaves, not to permitt them to hold or make any Solemnity or Funeralls for any deced Negros.