Irene Langhorne was born on June 5, 1873, in Danville to Nancy “Nanaire” Witcher Keene, of Cottage Hill, Pittsylvania County, and Chiswell “Chillie” Dabney Langhorne, of Lynchburg. In the wake of the American Civil War (1861–1865), Chillie and Nanaire Langhorne struggled to provide for their growing family. A cousin of Confederate general J. E. B. Stuart, whose call he had answered in 1862 to join the cavalry, Chillie Dabney worked in postbellum Danville as a hotel night clerk, then later tried his hand in the livery stable business before eventually becoming an auctioneer.

Irene Langhorne was the third of eight children. Her sister Lizzie and brother Keene preceded her; Harry, Nancy (later, Lady Nancy Astor who, in 1919, became the first woman to sit in the British Parliament), Phyllis, William Henry “Buck,” and Nora followed. Langhorne spent much of her early childhood living in Danville with her parents and siblings in a four-room bungalow. When she was eight years old, the family moved from Danville to Richmond, where her father earned a fortune in the railroad business, thereby bringing to an end the years of poverty.

In 1888 the Langhornes began to spend their summers at the Grand Central Hotel at White Sulphur Springs, West Virginia—a resort known as “The White”—where distinguished southern families mingled amid hopes that their daughters and sons would find suitable husbands and wives. In her late teens, with her poise, striking looks, and charm, Irene Langhorne became a popular belle at the resort and throughout Virginia. 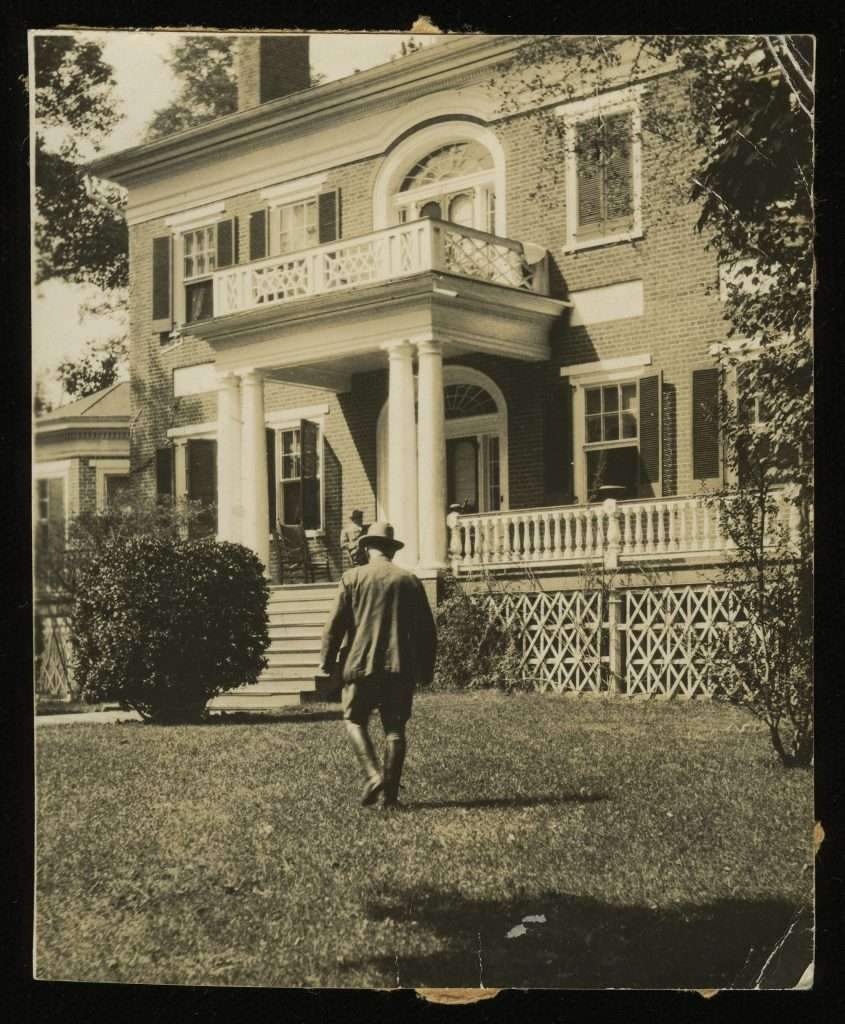 In 1892 Chillie Dabney bought Mirador, a colonial red-brick house with a farm in the village of Greenwood near Charlottesville, at the foot of the Blue Ridge Mountains, where the Langhornes hosted guests and relatives who joined in games of golf, squash, and tennis, and enjoyed equestrian sports and dancing. One year later, Irene Langhorne was invited by Ward McAllister—an expert in balls, dances, foods, and wines—to lead the grand march at the Patriarchs’ Ball at Delmonico’s in New York City, one of the era’s most prestigious social events. Langhorne was the first southern girl to lead the ball, and soon was asked to open the Philadelphia Assembly and to be a Mardi Gras queen in New Orleans, Louisiana.

In the summer of 1894, Langhorne returned with her parents to New York. One evening, while attending a dinner in her honor at Delmonico’s, she sat at a table next to the novelist and journalist Richard Harding Davis and his friend Charles Dana Gibson. Gibson was an artist from Massachusetts who, in 1890, gained fame for his pen-and-ink illustrations of the “Gibson Girl”—the newly emancipated post-Victorian woman whose “sporty jaw,” slender waist, and often indifferent gaze signified that she was at least equal, if not superior, to the gentlemen who called on her. A celebrity whose work appeared regularly in such noted publications as Harper’s Weekly, Scribner’s, and Collier’s Magazine, Gibson had created what some have called the “first nationwide fashion frenzy.”

When Gibson journeyed to Mirador in 1895 to ask for Langhorne’s hand in marriage, her father was unimpressed. His daughter could choose from any of the many established eligible suitors who had already proposed to her; the former Confederate soldier saw no reason why she should marry some “Yankee sign painter.” But despite his misgivings, Chillie Dabney, like his daughter, was won over by Gibson’s charm.

The couple was married on November 7, 1895, at Saint Paul’s Episcopal Church in Richmond. Their wedding has been interpreted by scholars such as C. Vann Woodward and more explicitly by Glenda Gilmore as a symbolic marriage of North and South: as “both a continuance of cavalier custom” and reconciliation between Confederate and Yankee. The writer James Fox, meanwhile, has suggested their marriage was a “symbolic end of the Civil War.” Their marriage also represented the end of the golden age of the southern belle: an institutionalized fiction that placed southern white and wealthy women on an imaginary antebellum pedestal of inviolate purity despite the challenges brought on by defeat in war. With the great “belle” herself moving to the North to live with an artistic celebrity and to become a celebrity in her own right, Irene Langhorne Gibson single-handedly and ironically brought an end to the era of the “belle fantasy” that had helped produce her. With their union, Irene Langhorne Gibson—who had represented to Virginia’s genteel society the personification of the southern belle—became the incarnation of the all-American “Gibson Girl.”

The Gibsons lived for most of their marriage in New York City and at 700 Acre Island, off the coast of Maine. They had two children: a daughter, Irene “Babs” Langhorne, and a son, Langhorne “Lang.”

While living in the North, Irene Langhorne Gibson became involved in progressive politics. In those early years, politics may have been little more than a diversion for Langhorne Gibson, who in an interview near the end of her life admitted that she had gotten into politics for “fun.” But she quickly learned to use her influence to promote her belief that government should serve the needs of the disadvantaged, especially children. 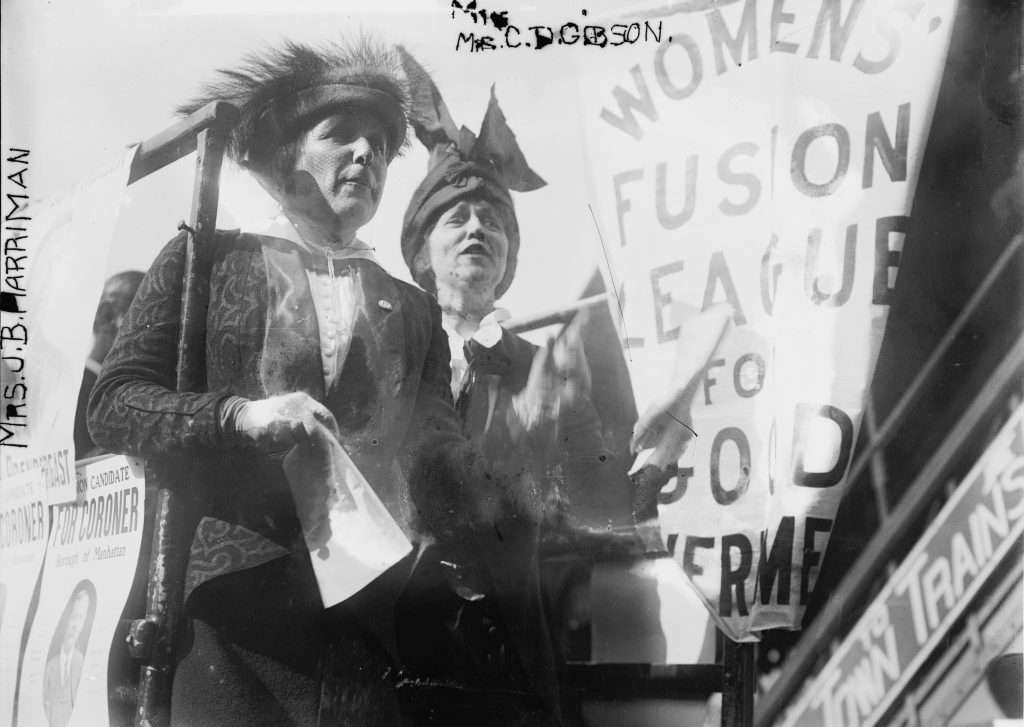 Langhorne Gibson probably became invested in social causes and politics in 1902 after visiting New York City’s Children’s Court, a new effort that attempted to find alternatives to criminal and civil court proceedings and detentions. In 1908 Langhorne Gibson, along with Anne Harriman Vanderbilt, Louisine Havemeyer, Lillie Skiddy Parker, and Blanche Ittleson, helped found Big Sisters Inc., which worked with the Children’s Court to improve the lives of troubled girls. A few years later, when demonstrating with the Equal Franchise Society and Women’s Political League for woman suffrage, Langhorne Gibson posed in the style of a Raphael Madonna as “Motherhood” at the Maxine Elliott Theatre in New York. In 1912 she sang at the Women’s Industrial Exhibition sponsored by an equal suffrage association, the Federation of Women’s Clubs.

During the 1916 presidential election, Langhorne Gibson widened her political circle. She chaired the Eastern Women’s Bureau of the Democratic National Committee, after which she and her husband were often invited by U.S. president Woodrow Wilson to the White House. When the United States entered World War I (1914–1918) in 1917, she joined in war bond rallies, supported the Red Cross, and managed an officer’s club in Manhattan. In 1918 the mayor of New York City appointed her chair of the Committee on Local Defense.

In 1923 Langhorne Gibson and her husband became trustees of the Heckscher Foundation, which operated a children’s home; she also became chair of the Child Placing and Adoption Committee of New York’s State Charities Aid Association, where for twenty-five years she oversaw the search for adoptive homes for children. She chaired New York’s branch of the Southern Women’s Educational Alliance, which helped southern girls get college educations. In 1929 she was elected the national publicity director of the Robert E. Lee Memorial Foundation and worked to acquire and restore Stratford Hall, Lee’s Virginia birthplace.

Late in the 1930s, the Gibsons spent their summers in Maine, entertaining friends and relatives. Those summer retreats ended on December 23, 1944, when Charles Gibson died at the couple’s New York City residence of a heart problem.

In 1951, at age seventy-eight, Irene Langhorne Gibson moved back to Virginia, closer to Mirador, to a newly built cottage on the farm in Greenwood that belonged to her son, Lang Gibson, and his wife, Parthenia Gibson. It was there, after years of illness and gradual memory loss, that Irene Langhorne Gibson died on April 21, 1956.