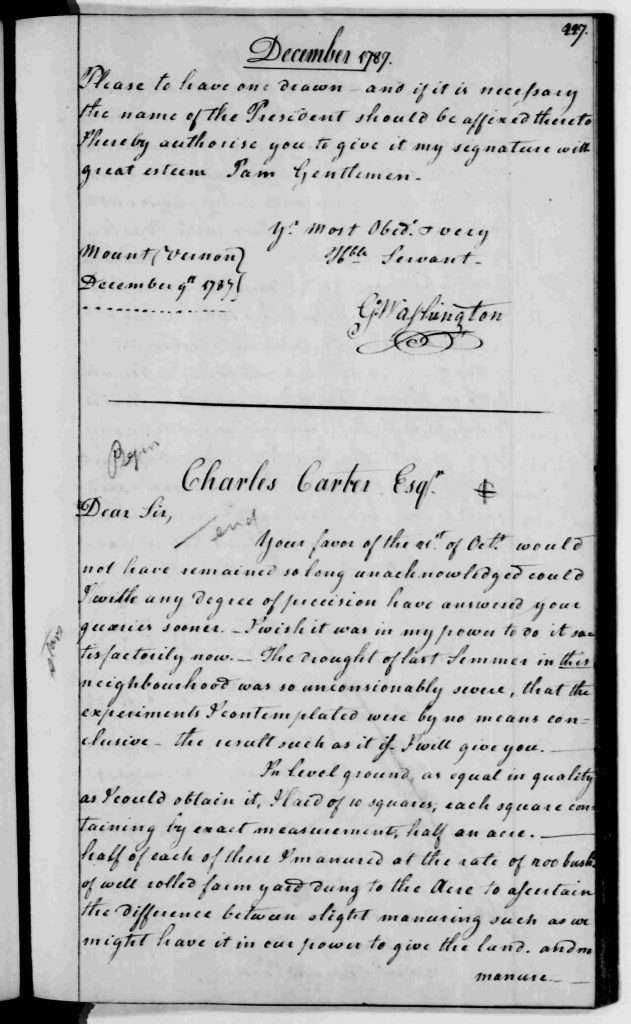 Your favor of the 21st of Octr would not have remained so long unacknowledged could I with any degree of precision have answered your quæries sooner. I wish it was in my power to do it satisfactorily now. The drought of last Summer in this neighbourhood was so unconsionably severe, that the experiments I contemplated were by no means conclusive—the result such as it is—I will give you.

In level ground, as equal in quality as I could obtain it, I laid of 10 squares; each square containing by exact measurement, half an acre. half of each of these I manured at the rate of 200 bushls of well rolled farm yard dung to the Acre to ascertain the difference between slight manuring such as we might have it in our power to give the land, and no 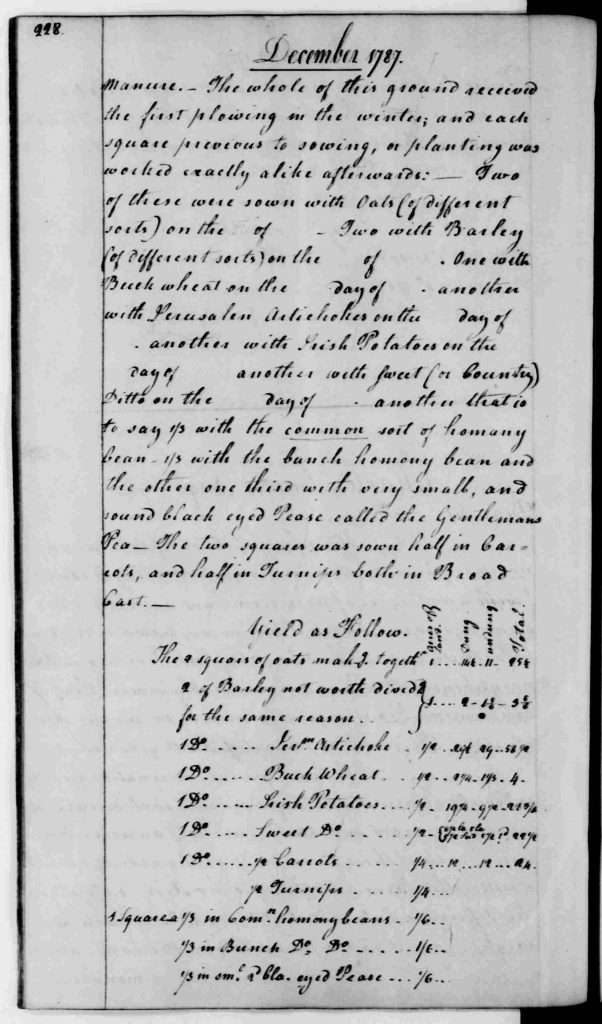 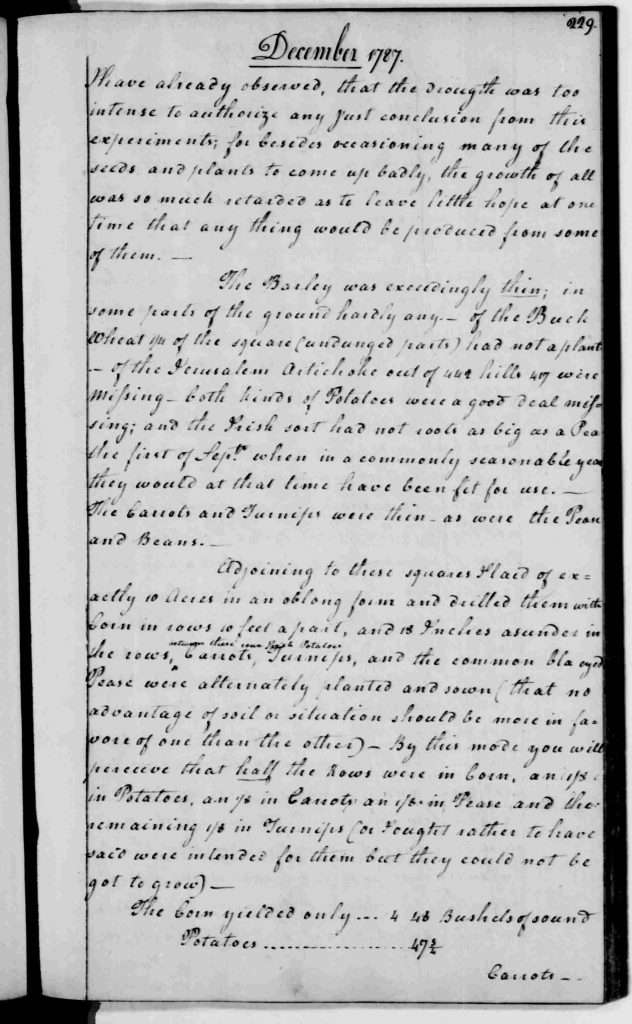 I have already observed, that the drougth was too intense to authorize any just conclusion from this experiments; for besides occasioning many of the seeds and plants to come up badly, the growth of all was so much retarded as to leave little hope at one time that any thing would be produced from some of them.

The Barley was exceedingly thin; in some parts of the ground hardly any. of the Buck Wheat ¼ of the square (undunged parts) had not a plant—of the Jerusalem Artichoke out of 442 hills 417 were Missing—both kinds of Potatoes were a good deal missing; and the Irish sort had not roots as big as a Pea the first of Septr when in a commonly seasonable year they would at that time have been fit for use. The Carrots and Turnips were thin—as were the Pease and Beans.

Adjoining to these squares I laid of exactly 10 Acres in an oblong form and drilled them with Corn in rows 10 feet a part, and 18 Inches asunder in the rows, between these rows Irish Potatoes Carrots, Turnips, and the common bla. eyed Pease were alternately planted and sown (that no advantage of soil or situation should be more in favore of one than the other)—By this mode you will perceive that half the Rows were in Corn, an ⅛ in Potatoes, an ⅛ in Carrots an ⅛ in Pease and the remaining ⅛ in Turnips (or I ought rather to have said were intended for them but they could not be got to grow). 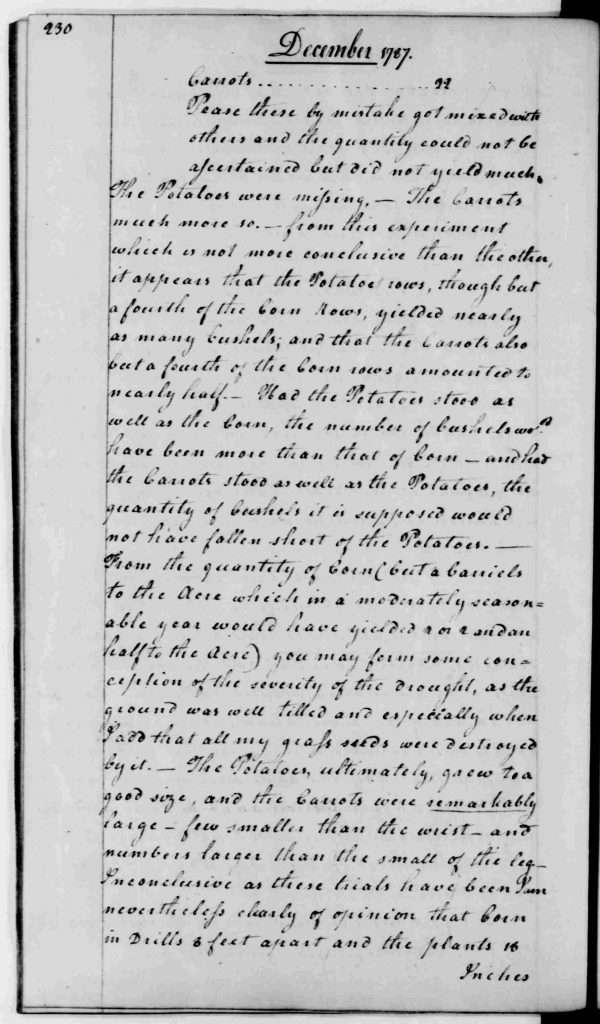 Pease these by mistake got mixed with others and the quantity could not be ascertained but did not yield much.

The Potatoes were missing, The Carrots much more so. from this experiment which is not more conclusive than the other, it appears that the Potatoe rows, though but a fourth of the Corn Rows, yielded nearly as many bushels; and that the Carrots also but a fourth of the Corn rows amounted to nearly half—Had the Potatoes stood as well as the Corn, the number of bushels wold have been more than that of Corn—and had the Carrots stood as well as the Potatoes, the quantity of bushels it is supposed would not have fallen short of the Potatoes. From the quantity of Corn (but a barriels to the Acre which in a moderately seasonable year would have yielded 2 or 2 and an half to the Acre) you may form some conception of the severity of the drought, as the ground was well tilled and especially when I add that all my grass seeds were destroyed by it. The Potatoes, ultimately, grew to a good size, and the Carrots were remarkably large—few smaller than the wrist—and numbers larger than the small of the leg. Inconclusive as these trials have been I am nevertheless clearly of opinion that Corn in Drills 3 feet apart and the plants 18 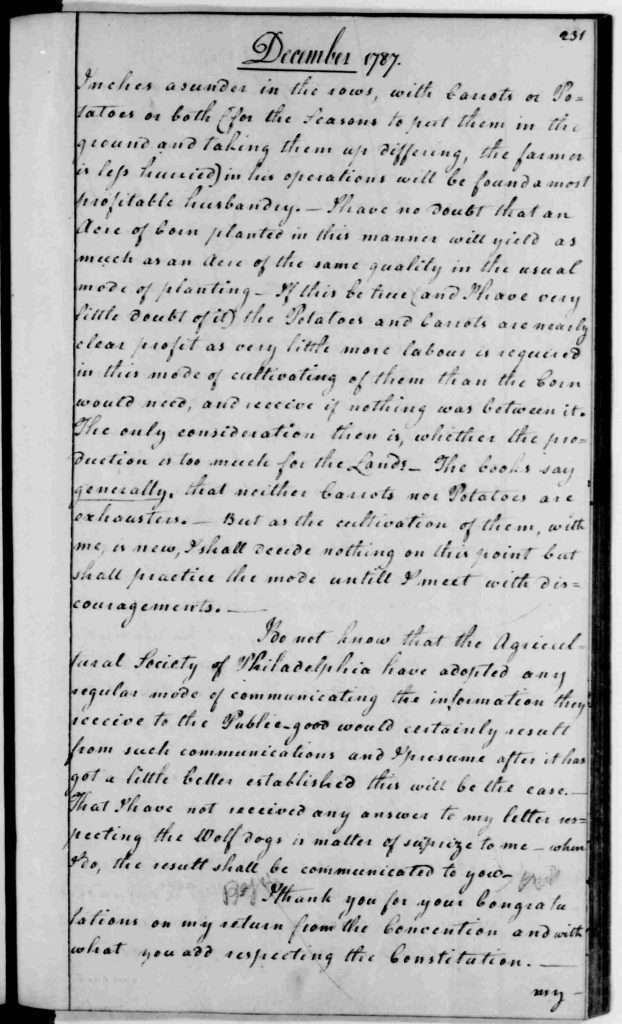 Inches asunder in the rows, with Carrots or Potatoes or both (for the Seasons to put them in the ground and taking them up differing, the farmer is less hurried) in his operations will be found a most profitable husbandry. I have no doubt that an Acre of Corn planted in this manner will yield as much as an Acre of the same quality in the usual mode of planting—If this be true (and I have very little doubt of it) the Potatoes and Carrots are nearly clear profit as very little more labour is required in this mode of cultivating of them than the Corn would need, and receive if nothing was between it. The only consideration then is, whether the production is too much for the Land? The books say generally, that neither Carrots nor Potatoes are exhausters. But as the cultivation of them, with me, is new, I shall decide nothing on this point but shall practice the mode untill I meet with discouragements.

I do not know that the Agricultural Society of Philadelphia have adopted any regular mode of communicating the information they receive to the Public—good would certainly result from such communications and I presume after it has got a little better established this will be the case. That I have not received any answer to my letter respecting the Wolf dogs is matter of surprize to me—when I do, the result shall be communicated to you.

I thank you for your Congratulations on my return from the Convention and with what you add respecting the Constitution. 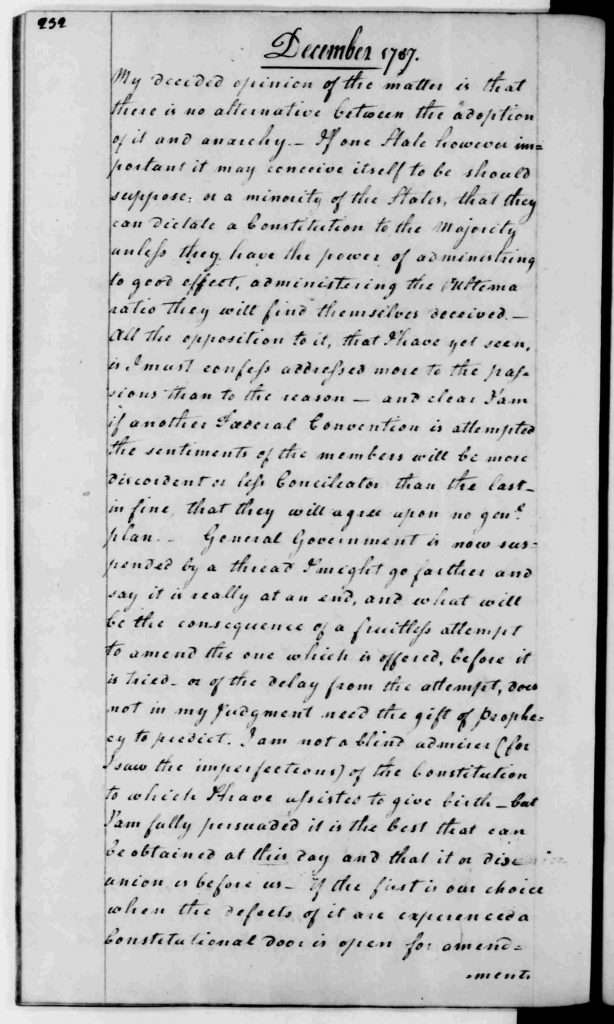 My decided opinion of the matter is that there is no alternative between the adoption of it and anarchy. If one State however important it may conceive itself to be should suppose, or a minority of the States, that they can dictate a Constitution to the Majority unless they have the power of administring to good effect, administering the Ultema ratio they will find themselves deceived. All the opposition to it, that I have yet seen, is I must confess addressed more to the passions than to the reason—and clear I am if another Fœderal Convention is attempted the sentiments of the members will be more discordent or less Conciliator than the last—in fine, that they will agree upon no genl plan. General Government is now suspended by a thread I might go farther and say it is really at an end, and what will be the consequence of a fruitless attempt to amend the one which is offered, before it is tried—or of the delay from the attempt, does not in my Judgment need the gift of prophecy to predict. I am not a blind admirer (for I saw the imperfections) of the Constitution to which I have assisted to give birth—but I am fully persuaded it is the best that can be obtained at this day and that it or disunion is before us—if the first is our choice when the defects of it are experenced a Constitutional door is open for amend- 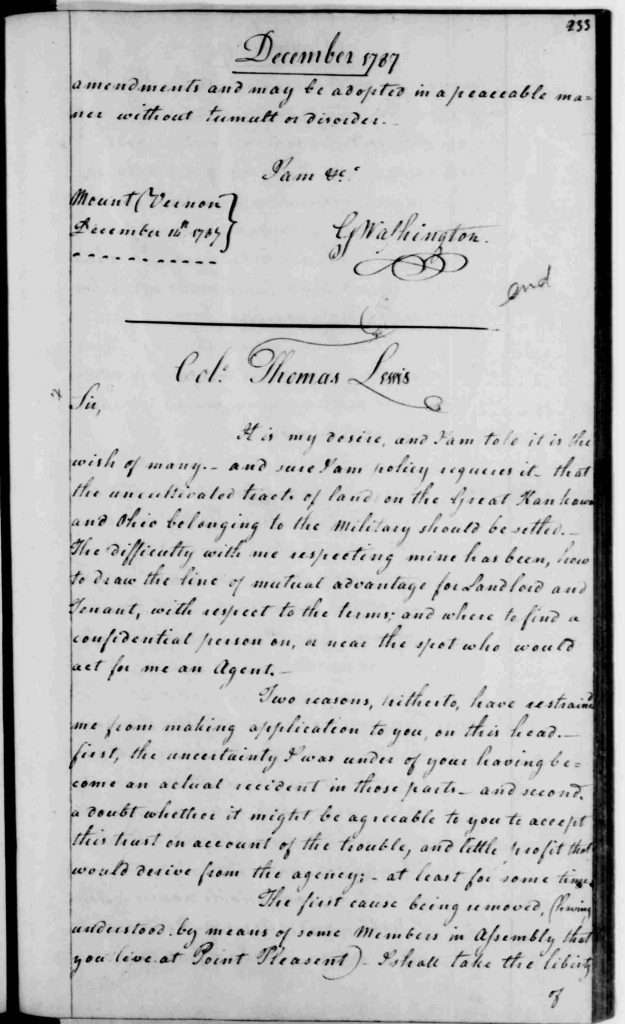 ments and may be adopted in a peaceable maner without tumult or disorder. I am &ca

RELATED CONTENT
Categories:
Type:
MAP
TIMELINE
December 14, 1787
George Washington in a private letter to Charles Carter expresses his approval of the Constitution after a long discussion of agricultural experiments. Carter later released the letter in 1788 in order to influence the ratification of the Constitution.
CITE THIS ENTRY