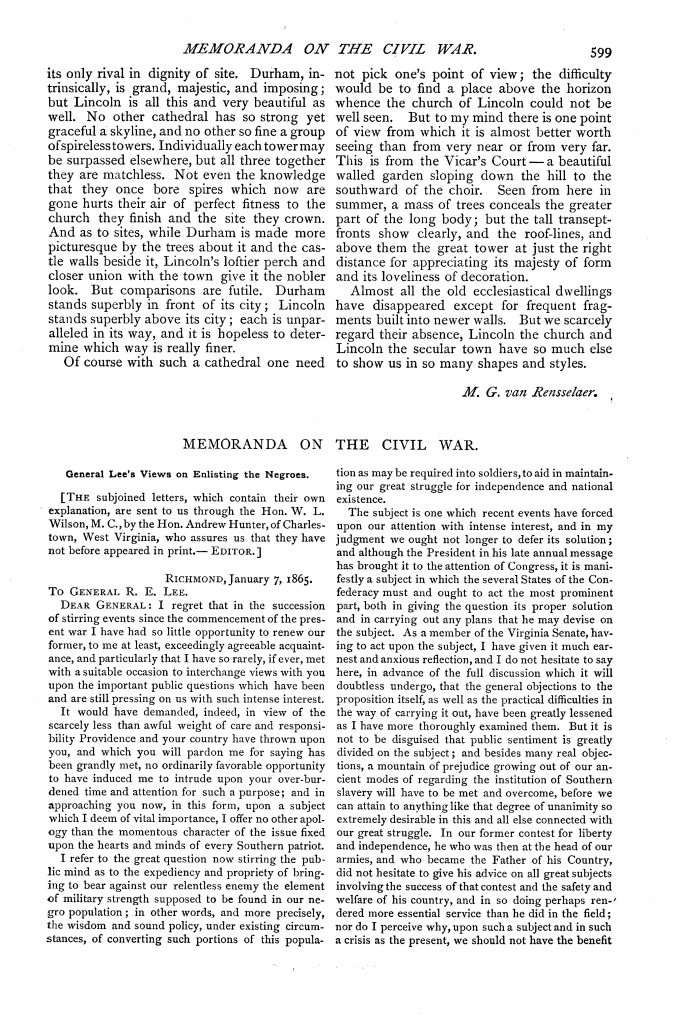 [The subjoined letters, which contain their own explanation, are sent to us through the Hon. W. L. Wilson, M. C., by the Hon. Andrew Hunter, of Charlestown, West Virginia, who assures us that they have not before appeared in print.—Editor.]

Dear General: I regret that in the succession of stirring events since the commencement of the present war I have had so little opportunity to renew our former, to me at least, exceedingly agreeable acquaintance, and particularly that I have so rarely, if ever, met with a suitable occasion to interchange views with you upon the important public questions which have been and are still pressing on us with such intense interest. It would have demanded, indeed, in view of the scarcely less than awful weight of care and responsibility Providence and your country have thrown upon you, and which you will pardon me for saying has been grandly met, no ordinarily favorable opportunity to have induced me to intrude upon your over-burdened time and attention for such a purpose; and in approaching you now, in this form, upon a subject which I deem of vital importance, I offer no other apology than the momentous character of the issue fixed upon the hearts and minds of every Southern patriot.

I refer to the great question now stirring the public mind as to the expediency and propriety of bringing to bear against our relentless enemy the element of military strength supposed to be found in our negro population; in other words, and more precisely, the wisdom and sound policy, under existing circumstances, of converting such portions of this population as may be required into soldiers, to aid in maintaining our great struggle for independence and national existence.

The subject is one which recent events have forced upon our attention with intense interest, and in my judgment we ought not longer to defer its solution; and although the President in his late annual message has brought it to the attention of Congress, it is manifestly a subject in which the several States of the Confederacy must and ought to act the most prominent part, both in giving the question its proper solution and in carrying out any plans that he may devise on the subject. As a member of the Virginia Senate, having to act upon the subject, I have given it much earnest and anxious reflection, and I do not hesitate to say here, in advance of the full discussion which it will doubtless undergo, that the general objections to the proposition itself, as well as the practical difficulties in the way of carrying it out, have been greatly lessened as I have more thoroughly examined them. But it is not to be disguised that public sentiment is greatly divided on the subject; and besides many real objections, a mountain of prejudice growing out of our ancient modes of regarding the institution of Southern slavery will have to be met and overcome, before we can attain to anything like that degree of unanimity so extremely desirable in this and all else connected with our great struggle. In our former contest for liberty and independence, he who was then at the head of our armies, and who became the Father of his Country, did not hesitate to give his advice on all great subjects involving the success of that contest and the safety and welfare of his country, and in so doing perhaps rendered more essential service than he did in the field; nor do I perceive why, upon such a subject and in such a crisis as the present, we should not have the benefit 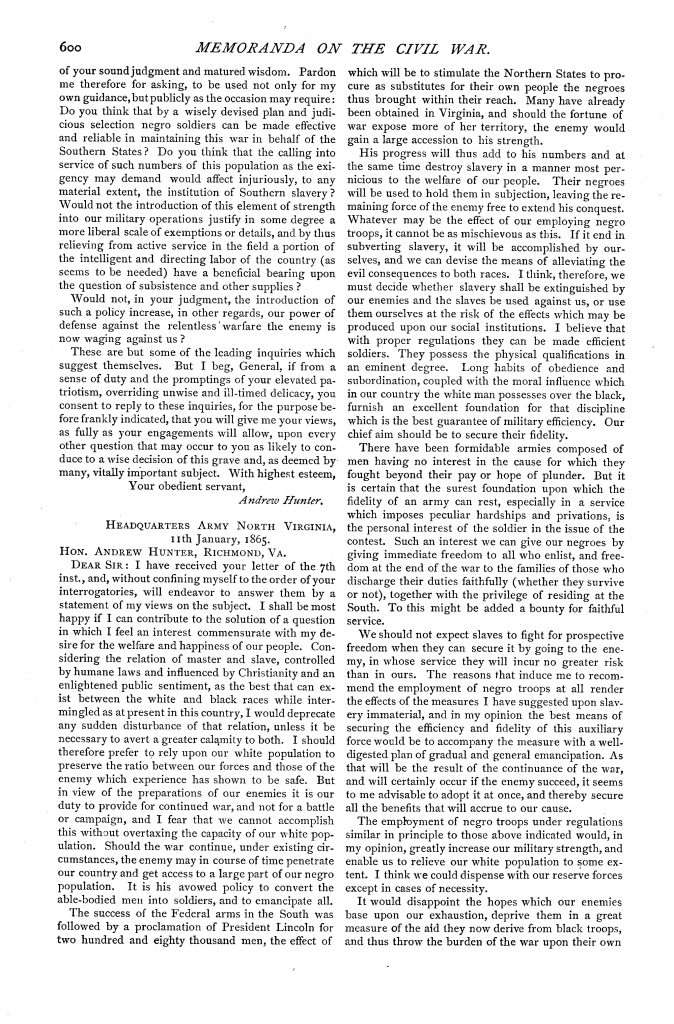 of your sound judgment and matured wisdom. Pardon me therefore for asking, to be used not only for my own guidance, but publicly as the occasion may require: Do you think that by a wisely devised plan and judicious selection negro soldiers can be made effective and reliable in maintaining this war in behalf of the Southern States? Do you think that the calling into service of such numbers of this population as the exigency may demand would affect injuriously, to any material extent, the institution of Southern slavery? Would not the introduction of this element of strength into our military operations justify in some degree a more liberal scale of exemptions or details, and by thus relieving from active service in the field a portion of the intelligent and directing labor of the country (as seems to be needed) have a beneficial bearing upon the question of subsistence and other supplies?

Would not, in your judgment, the introduction of such a policy increase, in other regards, our power of defense against the relentless warfare the enemy is now waging against us?

These are but some of the leading inquiries which suggest themselves. But I beg, General, if from a sense of duty and the promptings of your elevated patriotism, overriding unwise and ill-timed delicacy, you consent to reply to these inquiries, for the purpose before frankly indicated, that you will give me your views, as fully as your engagements will allow, upon every other question that may occur to you as likely to conduce to a wise decision of this grave and, as deemed by many, vitally important subject. With highest esteem,

Dear Sir: I have received your letter of the 7th inst., and, without confining myself to the order of your interrogatories, will endeavor to answer them by a statement of my views on the subject. I shall be most happy if I can contribute to the solution of a question in which I feel an interest commensurate with my desire for the welfare and happiness of our people. Considering the relation of master and slave, controlled by humane laws and influenced by Christianity and an enlightened public sentiment, as the best that can exist between the white and black races while intermingled as at present in this country, I would deprecate any sudden disturbance of that relation, unless it be necessary to avert a greater calamity to both. I should therefore prefer to rely upon our white population to preserve the ratio between our forces and those of the enemy which experience has shown to he safe. But in view of the preparations of our enemies it is our duty to provide for continued war, and not for a battle or campaign, and I fear that we cannot accomplish this without overtaxing the capacity of our white population. Should the war continue, under existing circumstances, the enemy may in course of time penetrate our country and get access to a large part of our negro population. It is his avowed policy to convert the able-bodied mcii into soldiers, and to emancipate all.

The success of the Federal arms in the South was followed by a proclamation of President Lincoln for two hundred and eighty thousand men, the effect of which will be to stimulate the Northern States to procure as substitutes for their own people the negroes thus brought within their reach. Many have already been obtained in Virginia, and should the fortune of war expose more of her territory, the enemy would gain a large accession to his strength. His progress will thus add to his numbers and at the same time destroy slavery in a manner most pernicious to the welfare of our people. Their negroes will be used to hold them in subjection, leaving the remaining force of the enemy free to extend his conquest. Whatever may be the effect of our employing negro troops, it cannot be as mischievous as this. If it end in subverting slavery, it will be accomplished by ourselves, and we can devise the means of alleviating the evil consequences to both races. I think, therefore, we must decide whether slavery shall be extinguished by our enemies and the slaves be used against us, or use them ourselves at the risk of the effects which may be produced upon our social institutions. I believe that with proper regulations they can be made efficient soldiers. They possess the physical qualifications in an eminent degree. Long habits of obedience and subordination, coupled with the moral influence which in our country the white man possesses over the black, furnish an excellent foundation for that discipline which is the best guarantee of military efficiency. Our chief aim should be to secure their fidelity.

There have been formidable armies composed of men having no interest in the cause for which they fought beyond their pay or hope of plunder. But it is certain that the surest foundation upon which the fidelity of an army can rest, especially in a service which imposes peculiar hardships and privations, is the personal interest of the soldier in the issue of the contest. Such an interest we can give our negroes by giving immediate freedom to all who enlist, and freedom at the end of the war to the families of those who discharge their duties faithfully (whether they survive or not), together with the privilege of residing at the South. To this might be added a bounty for faithful service.

We should not expect slaves to fight for prospective freedom when they can secure it by going to the enemy, in whose service they will incur no greater risk than in ours. The reasons that induce me to recommend the employment of negro troops at all render the effects of the measures I have suggested upon slavery immaterial, and in my opinion the best means of securing the efficiency and fidelity of this auxiliary force would be to accompany the measure with a well-digested plan of gradual and general emancipation. As that will be the result of the continuance of the war, and will certainly occur if the enemy succeed, it seems to me advisable to adopt it at once, and thereby secure all the benefits that will accrue to our cause.

The employment of negro troops under regulations similar in principle to those above indicated would, in my opinion, greatly increase our military strength, and enable us to relieve our white population to some extent. I think we could dispense with our reserve forces except in cases of necessity.

It would disappoint the hopes which our enemies base upon our exhaustion, deprive them in a great measure of the aid they now derive from black troops, and thus throw the burden of the war upon their own 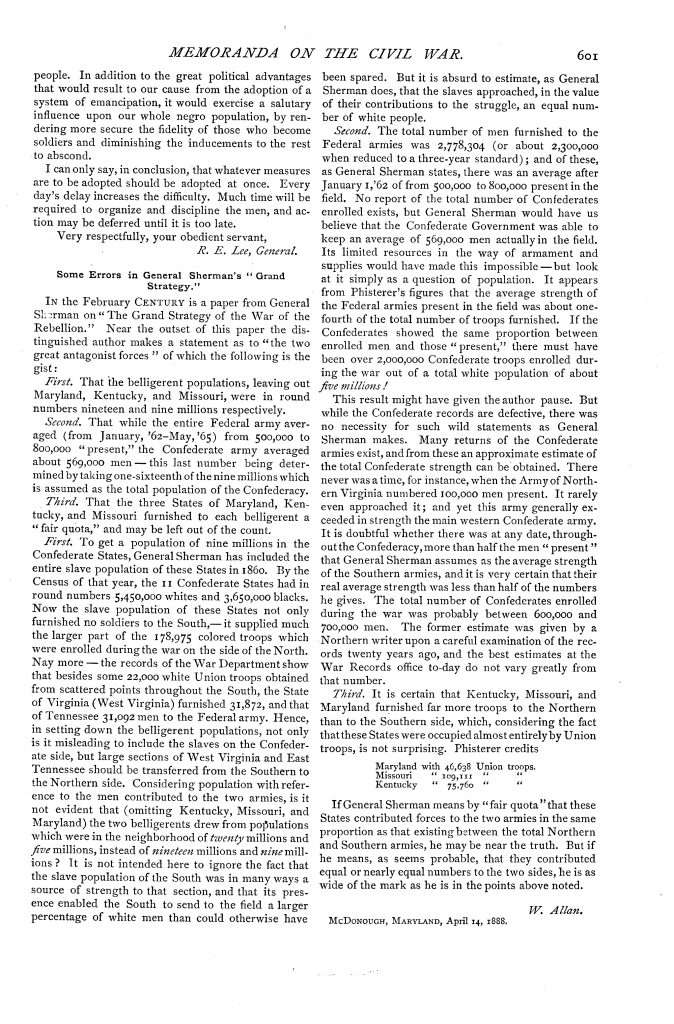 people. In addition to the great political advantages that would result to our cause from the adoption of a system of emancipation, it would exercise a salutary influence upon our whole negro population, by rendering more secure the fidelity of those who become soldiers and diminishing the inducements to the rest to abscond.

I can only say, in conclusion, that whatever measures are to be adopted should be adopted at once. Every days delay increases the difficulty. Much time will be required to organize and discipline the men, and action may be deferred until it is too late.