In May and June of 1862, Union general George B. McClellan had sailed his Army of the Potomac down the Chesapeake Bay and then slowly and deliberately marched it up the Peninsula in an attempt at taking the Confederate capital at Richmond from the southeast. The campaign culminated in stalemate at the Battle of Seven Pines–Fair Oaks on May 31–June 1, 1862. When the Confederate commander, Joseph E. Johnston, was severely wounded, Robert E. Lee assumed command of the Army of Northern Virginia and immediately went on the offensive.

The Confederate Air Force: Balloon Reconnaissance in the Civil War
The Battle of Mechanicsville (Beaver Dam Run) on June 26 was a Union victory, but McClellan nevertheless retreated from his position on the outskirts of Richmond. In part, he was wary of Jackson’s troops, who had just arrived from the Shenandoah Valley after winning the battles of Cross Keys and Port Republic. His fears were also fueled by a great deal of noise and movement coming from the Confederate lines—an elaborate deception orchestrated by Confederate general and theater enthusiast John B. Magruder—and the appearance of a silk hot air balloon reconnoitering from high above the area. McClellan ordered the Fifth Corps under Union general Fitz-John Porter to protect his retreat route while the rest of the army withdrew to the safety of the James River.

It never occurred to Lee that McClellan would retreat after just one battle—and a Union victory at that. He met with Jackson and A. P. Hill at Walnut Grove Church and formulated a plan that would either cut Union supply lines or force a battle. Jackson and Daniel Harvey Hill were to attack McClellan’s supply line to the northeast, while A. P. Hill and James Longstreet pressured Porter’s Fifth Corps from the west, driving it into a trap. The Confederates army’s inexcusably poor knowledge of the local geography, however, would interfere with the execution of Lee’s plan.

To make his stand, Porter selected a plateau encircled at its base by the marshy stream known as Boatswain Swamp. The attacking Confederates would have to make their way across a long, sloping field, through a boggy creek, and up a steep hillside protected by thick underbrush and rows of Union infantrymen, all the while enduring the punishing fire of artillery arrayed across the hilltop. Lee was surprised to learn that the enemy had withdrawn behind Boatswain Swamp, which appeared on none of his maps. Believing McClellan was massing his entire army against him, Lee accepted the challenge. 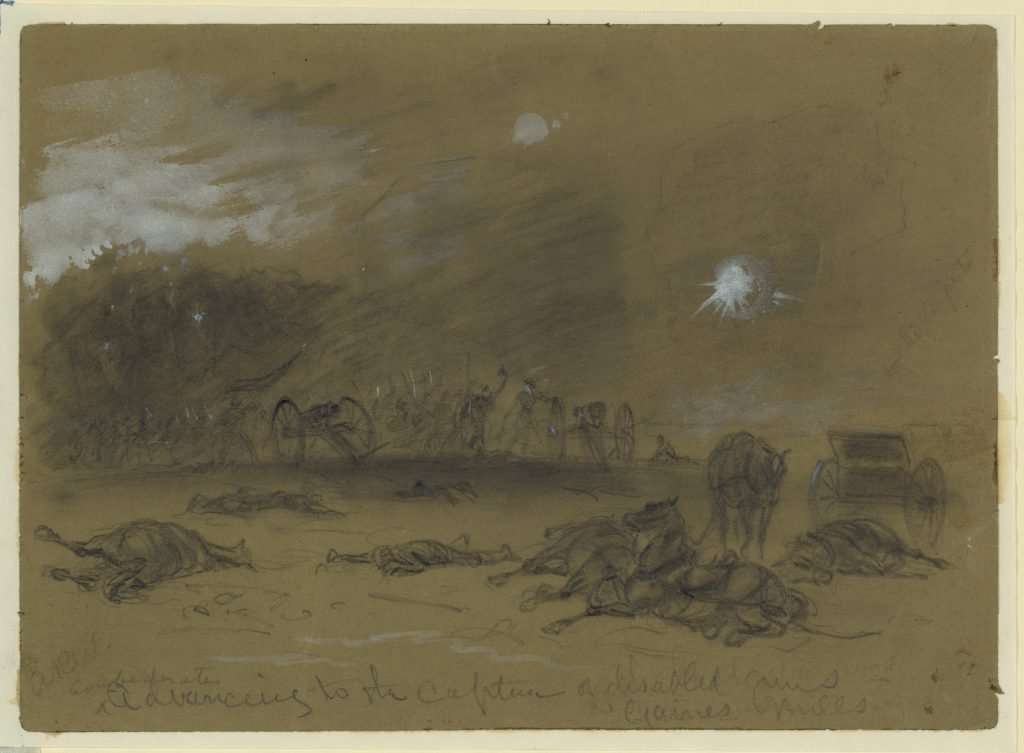 Confederates Advancing to the capture of disabled guns

Porter observed the gathering Confederate lines and, suspecting his enemy’s intention to “overwhelm and crush” him, finally requested reinforcements. They had not yet arrived when the Confederates, under A. P. Hill, launched their initial assault that afternoon. The fighting was so intense that one Union soldier remarked, “Hell itself seemed to break loose.” With cannon blasting down from the hilltop, the two-hour charge resulted in more than 2,000 casualties. Eager to maintain momentum, Lee urged three brigades under Richard S. Ewell to continue the attack on the Union center. The Confederates suffered high casualties in several ferocious charges, which Ewell boldly commanded on foot after his horse was killed beneath him. The Union troops managed to hold their line through Boatswain Swamp, although the fighting entirely depleted their ammunition.

Confederate president Jefferson Davis and other prominent Richmonders had gathered to watch the battle from safely behind Confederate lines. An unusual occurrence known as an “acoustic shadow,” created by pockets of dense moist air, prevented the onlookers from hearing the sounds of battle, although the fighting was only a few miles distant. The only action they could readily observe was Longstreet’s force on the far right of the Confederate line. Lee had ordered him to create a diversion, the failure of which was apparent to everyone as lines of men streamed to the rear. Unaware that this was merely a distraction, Porter wired McClellan that he was “pressed hard, very hard” and feared being driven from his position.

By late afternoon, Jackson had finally arrived, but further miscommunication resulted in his awaiting further orders rather than advancing onto the field. The error was eventually discovered, and the Stonewall Brigade moved forward in the fading sunlight with a sense of urgency. The Virginia soldiers joined the final charge, which progressed unevenly across the field, through the swamp, and up the steep hill. The narrow hilltop allowed little room for maneuvering, so the ensuing battle was a heated contest of brute force. Eventually, the Union line broke in several places almost simultaneously, although the 4th Texas and 18th Georgia infantry regiments are generally credited with initiating the breakthrough. The fighting was brutal; in the words of one Texas soldier, “One volley was poured into their backs, and it seemed as if every ball found a victim, so great was the slaughter.” The Confederates pursued the fleeing Union troops across an open field, through tangled swampland, and across the Chickahominy River.

As the Confederates advanced on a second line of Union artillery, they were amazed to find themselves suddenly under attack by Union cavalry led by Philip St. George Cooke, the father-in-law of Confederate general J. E. B. Stuart. The Confederates unleashed a withering fire that immediately dropped one-fourth of the oncoming cavalrymen. Most of the remaining troopers veered away from the Confederates, although a few charged directly into enemy lines and were promptly bayoneted. Porter would later blame Cooke’s charge for that day’s defeat, although in reality the Confederates had all but cinched their victory.

The splintering Union line and deepening darkness gradually brought the battle to a close. Reinforcements arrived as the bulk of the army was retreating, but had little hope of reversing fortunes. Two entire Union regiments—nearly a thousand men—surrendered to Confederates after finding themselves surrounded by the enemy. Union forces also had twenty-two pieces of artillery captured, although the number of their killed and wounded—about 4,000 men—was significantly smaller than that of the attacking Confederates, who suffered almost 8,000 casualties.

Many veterans would remember the nine hours at Gaines’s Mill as the most vicious fighting of the entire war. McClellan soon declared publicly what he had already decided privately: that he would abandon his campaign against the Confederate capital. Lee, meanwhile, earned the confidence of the Army of Northern Virginia and President Davis, although the rest of the Seven Days’ Campaign would fail to destroy the Union army.