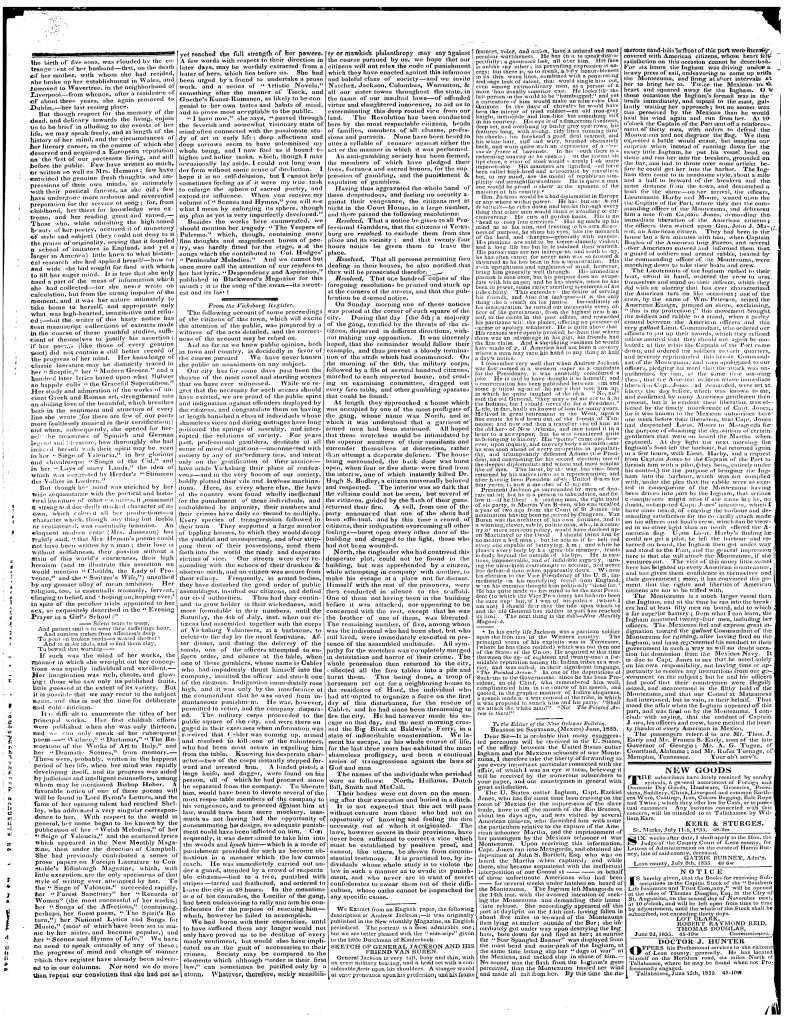 From the Vicksburg Register.

The following account of some proceedings of the citizens of this town, which will excite the attention of the public, was prepared by a witness of the acts detailed, and the correctness of the account may be relied on.

And so far as we know public opinion, both in town and country, is decidedly in favor of the course pursued. We have never known the public so unanimous on any subject.

Our city has for some days past been the theatre of the most novel and startling scenes that we have ever witnessed. While we regret that the necessity for such scenes should have existed, we are proud of the public spirit and indignation against offenders displayed by the citizens, and congratulate them on having at length banished a class of individuals whose shameless vices and daring outrages have long poisoned the springs of morality, and interrupted the relations of society. For years past, professional, destitute of all sense of moral obligations—unconnected with society by any of its ordinary ties, and intent only on the gratification of their averice [sic]—have made Vicksburg their place of rendezvous—and in the very bosom of our society, boldly plotted their vile and lawless machinations. Here, as every where else, the laws of the country were found wholly ineffectual for the punishment of these individuals, and emboldened by impunity, their numbers and their crimes have daily continued to multiply. Every species of transgression followed in their train. They supported a large number of tippling houses, to which they would decoy the youthful and unsuspecting, and after stripping them of their possessions, send them forth into the world the ready and desperate victims of vice. Our streets were ever resounding with the echoes of their drunken & obscene mirth, and no citizen was secure from their viliany [sic]. Frequently, in armed bodies, they have disturbed, the good order of public assemblages, insulted our citizens, and defied our civil authorities. Thus had they continued to grow bolder in their wickedness, and more formidable in their numbers, until the Saturday, the 4th of July, inst. when our citizens had assembled together with the corps of Vicksburg Volunteers [a militia unit], at a barbacue [sic], to celebrate the day by the usual festivities. After dinner, and during the delivery of the toasts, one of the officers attempted to enforce order, and silence at the table, when one of those gamblers, whose name is Cabler who had impudently thrust himself into the company, insulted the officer and struck one of the citizens. Indignation immediately rose high, and it was only by the interferance [sic] of the commandant that he was saved from instantaneous punishment. He was, however, permitted to retire, and the company dispersed. The military corps proceeded to the public square of the city, and were there engaged in their exercises when information was received that Cabler was coming up, armed and resolved to kill one of the volunteers, who had been most active in expelling him from the table. Knowing his desperate character—two of the corps instantly stepped forward and arrested him. A loaded pistol, a large knife, and dagger, were found on his person, all of which he had procured since he separated from the company. To liberate him, would have been to devote several of the most respectable members of the company to his vengeance, and to proceed against him at law, would have been mere mockery, inasmuch as not having had the opportunity of consummating his design, no adequate punishment could have been inflicted on him. Consequently, it was determined to take him into the woods and lynch him—which is a mode of punishment provided for such as become obnoxious in a manner which the law cannot reach. He was immediately carried out under a guard, attended by a crowd of respectable citizens—tied to a tree, punished with stripes—tarred and feathered, and ordered to leave the city in 48 hours. In the meantime, one of his comrades, the Lucifer of the gang, had been endeavoring to rally and arm his confederates for the purpose of rescuing him—which, however he failed to accomplish.

We had borne with their enormities, until to have suffered them any longer would not only have proved us to be destitu[t]e of every manly sentiment, but would also have implicated us in the guilt of accessaries [sic] to their crimes. Society may be compared to the elements which although "order is their first law," can sometimes be purified only by a storm. Whatever, therefore, sickly sensibility or mawkish philanthropy may say against the course pursued by us, we hope that our citizens will not relax the code of punishment which they have enacted against this infamous and baleful class of society—and we invite Natchez, Jackson, Columbus, Warrenton, & all our sister towns throughout the state, in the name of our insulted laws—of offended virtue and slaughtered innocence, to aid us in exterminating this deep rotted vice from our land. The Revolution has been conducted here by the most respectable citizens, heads of families, embers of all classes, professions and pursuits. None have been heard to utter a syllable of censure against either the act or the manner in which it was performed.

An anti-gambling society has been formed, the members of which have pledged their lives, fortunes and sacred honors, for the suppression of gambling, and the punishment & expulsion of gamblers.

Having thus aggravated the whole band of these desperadoes, and feeling no security against their vengeance, the citizens met at night in the Court House, in a large number, and there passed the following resolutions:

Resolved, That a notice be given to all Professional Gamblers, that the citizens of Vicksburg are resolved to exclude them from this place and its vicinity; and that twenty-four hours notice be given them to leave the place.

Resolved, That all persons permitting faro dealing in their houses, be also notified that they will be prosecuted therefor.

Resolved, That one hundred copies of the foregoing resolutions be printed and stuck up at the corners of the streets, and that this publication be deemed notice.

On Sunday morning one of these notices was posted at the corner of each square of the city. During that day [the 5th] a majority of the gang, terrified by the threats of the citizens, dispersed in different directions, without making any opposition. It was sincerely hoped, that the remainder would follow their example, and thus prevent a bloody termination of the strife which had commenced. On the morning of the 6th, the military corps, followed by a file of several hundred citizens, marched to each suspected house, and sending an examining committee, dragged out every faro table, and other gambling aparatus [sic] that could be found.

At length they approached a house which was occupied by one of the most profligate of the gang, whose name was North, and in which it was understood that a garrison of armed men had been stationed. All hoped that these wretches would be intimidated by the superior numbers of their assailants and surrender themselves at discretion, rather than attempt a desperate defence. The house being surrounded, the back door was burst open, when four or five shots were fired from the interior, one of which instantly killed Dr. Hugh S. Bodley, a citizen universally beloved and respected. The interior was so dark that the villains could not be seen, but several of the citizens, guided by the flash of their guns, returned their fire. A yell, from one of the party announced that one of the shots had been effectual, and by this time a crowd of citizens, their indignation overcoming all other feelings—burst open every other door of the building and dragged to the light, those who had not been wounded.

North, the ringleader who had contrived this desperate plot, could not be found in the building, but was apprehended by a citizen, while attempting in company with another, to make his escape at a place not far distant. Himself with the rest of the prisoners, were then conducted in silence to the scaffold. One of them not having been in the building before it was attacked, nor appearing to be concerned with the rest, except that he was the brother of one of them, was liberated. The remaining number, of five, among whom was the individual who had been shot, but who still lived, were immediately executed in presence of the assembled multitude. All sympathy for the wretches was completely merged in detestation and horror of their crime. The whole procession then returned to the city, collected all the faro tables into a pile and burnt them. This being done, a troop of horsemen set out for a neighboring house to the residence of Hord, the individual who had attempted to organize a force on the first day of this disturbance, for the rescue of Cabler, and he had since been threatening to fire the city. He had however made his escape on that day, and the next morning crossed the Big Black [River] at Baldwin's Ferry, in a state of indiscribable [sic] consternation. We lament his escape, as his whole course of life, for the last three years has exhibited the most shameless profligacy, and been a continual series of transgressions against the laws of God and man.

The names of the individuals who perished were as follows: North, Hullams, Dutch Bill, Smith and McCall.

Their bodies were cut down on the morning after their execution and buried in a ditch.

It is not expected that this act will pass without censure from those who had not an opportunity of knowing and feeling the dire necessity out of which it originated. The laws, however severe in their provisions, have never been sufficient to correct a vice which must be established by positive proof, and cannot, like others, be shown from circumstantial testimony. It is practiced too, by individuals whose whole study is to violote [sic] the law in such a manner aa [sic] to evade its punishment, and who never are in want of secret confederates to swear them out of their difficulties, whose oaths cannot be impeached for any specific cause.