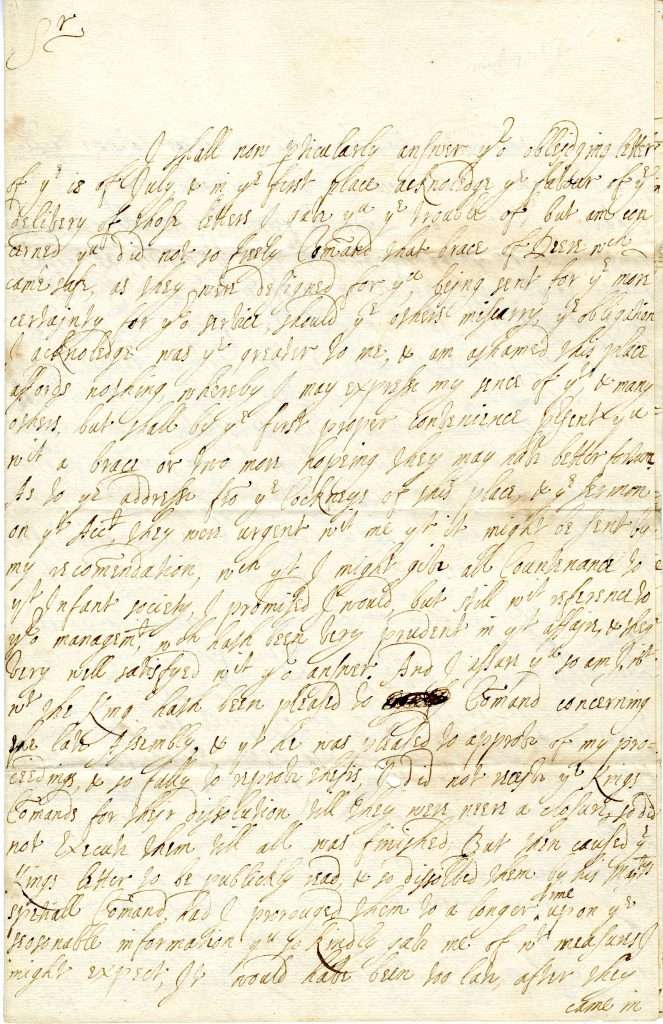 I shall now particularly answer your obleidging letter of the 18 of July, and in the first place acknoledge the favour of the delivery of those letters I gave you the trouble of, but am concerned you did not freely Command that brace of Deere which came safe, as they were designed for you, being sent for the more certainty for your service should the others miscarry. The obligation I acknoledge was the greater to me, and I am ashamed this place affords nothing whereby I may expresse my sence of that and many others, but shall by the first proper convenience present you with a brace or two more hopeing they may have better fortune. As to the addresse from the Cockneys of this place, and the sermon on that Account, they were urgent with me that it might be sent by my recommendation, which that I might give all Countenance to that Infant society, I promised I would, but still with reference to your management, which hath been very prudent in that affaire, and they very well satisfyed with your answer. And I assure you so am I with what the King hath been pleased to Command concerning the late Assembly, and that he was pleased to approve of my proceedings, and so fully to reprove theirs. I did not receive the Kings Commands for their dissolution till they were neere a closure, so [I] did not execute them till all was finished. But then [I] caused the Kings letter to be publickly read, and so dissolved them by his Majestys spetiall Command. Had I prorogued them to a longer time upon the seasonable information you so kindly gave me of what measures I might expect; It would have been too late after they 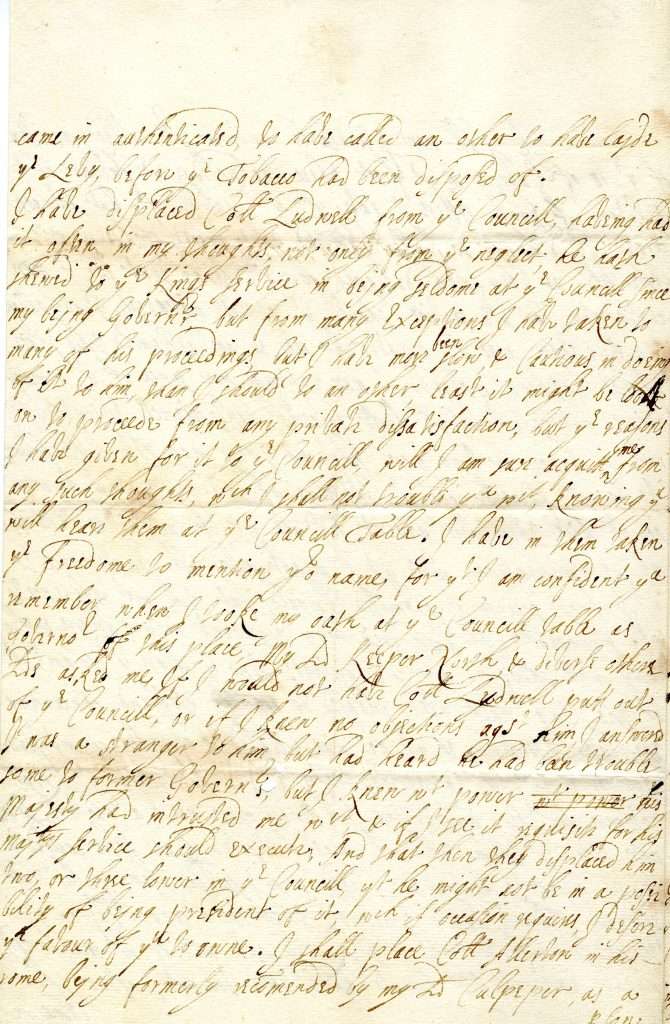 came in authenticated, to have called an other to have laide the Levy, before the Tobacco had been disposed of.

I have displaced Col. Ludwell from the Councill, haveing had it often in my thoughts, not only from the neglect he hath shewed to the Kings service in being seldome at the Councell since my being Governor, but from many exceptions I have taken to many of his proceedings, but I have more been slow and cautious in doeing of it to him than I should to an other least it might be lookt on to proceede from any particular dissatisfaction, but the reasons I have given for it to the Councill will I am sure acquitt me from any such thoughts, which I shall not trouble you with knowing you will heare them at the Councill Table. I have taken in them the freedome to mention your name for that I am confident you remember when I tooke my oath at the Councell table as Governor of this place my Lord Keeper North and diverse other Lords asked me If I would not have Col. Ludwell put out of the Councill, or if I knew no objections against him. I answered I was a stranger to him but had heard he had been troublesome to former Governors but I knew what his Majesty had intrusted me with and if I see it requisite for his Majestys service should execute. And that then they displaced him two, or three [places] lower in the Councill, that he might not be in a possibility of being president of it, which if occasion requires, I desire the favour of you to owne. I shall place Col. Allerton in his rome, being formerly recommended by my Lord Culpeper as a 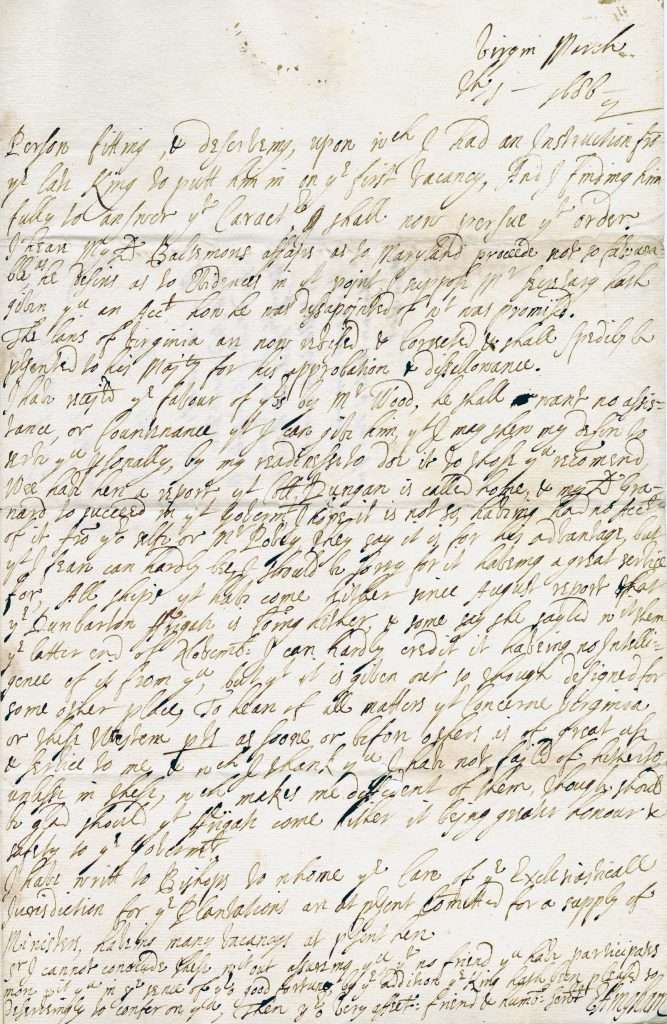 person fitting and deserveing, upon which I had an Instruction from the late King to putt him in the first vacancy, And I finding him fully to answer that Character, I shall now persue that order.

I heare my Lord Baltemores affairs as to Maryland proceede not so favorable as he desires as to evidences in that point. I suppose Mr. Secretary hath given you an Account how he was dysappointed of what was promised.

The laws of Virginia are now revised and Corrected and shall be speedily presented to his Majesty for his approbation and disallowance.

I have received the favour of yours by Mr. Wood, he shall want no assistance, or Countenance that I can give him, that I may shew my desire to serve you personally, by my readinesse to doe it to those you recommend. Wee have here a report that Col. Dungan is called home, and my Lord Granard to succeed him in that Government. I hope it is not so, having had no Account of it from yourselfe or Mr. Povey. They say it is for his advantage, but that I feare can hardly bee; I should be sorry for it haveing a great service for. All ships that have come hither since August report that the Dunbarton Frigate is Comeing hither, and some say she sayled with them the latter end of November. I can hardly credit it haveing no intelligence of it from you, but that it is given out so though designed for some other place, To heare if all matters that Concerne Virginia or these Western parts as soone or before others is of great use and service to me, and which I thanke you. I have not failed hitherto unlesse in these, which makes me diffident of them, though [I] should be glad should that Frigate come hither, it being greater honour and safety to the Government.

I have writt to Bishops to whome the Care of the Exclesiasticall Jurisdiction for the Plantations are at present Committed for a supply of Ministers, having many vacancys at present here.

Sir I cannot conclude these without assureing you that no friend you have participates more with you in the sence of your good fortune, by the addition the King hath been pleased so deservedly to confer on you, Then your very affectionate friend and humble servant,