Antonia J. Ford was born on July 23, 1838, in Fairfax Court House, the daughter of Edward Rudolph Ford, a wealthy merchant, and Julia F. Ford. In 1857, she attended the Buckingham Female Collegiate Institute in Buckingham, Virginia. During the Civil War, her brother Charles Ford served with Stuart’s cavalry, and Ford herself became acquainted with the general and began supplying him with information. Histories have traditionally cited Ford’s youth and beauty as the assets she used in intelligence gathering. When her father opened the family’s home—which was located halfway between Washington, D.C., and Manassas—as a gathering spot for Union officers, she had ample opportunity to charm Union soldiers and steal their secrets. She is said to have sometimes worked in conjunction with Rose O’Neal Greenhow, a Confederate agent in Washington, D.C. On October 7, 1861, Stuart presented Ford with a “commission” as an honorary aide-de camp, ordering she be “obeyed, respected and admired” as such. Instead, however, the document helped get her thrown in jail. 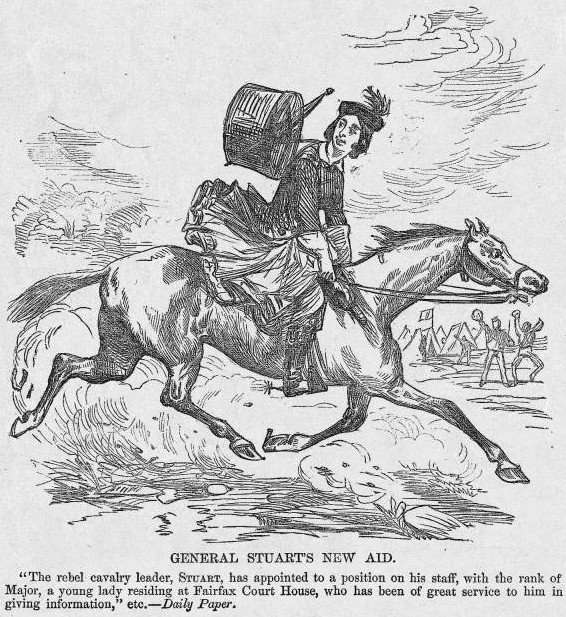 Ford is best known for her alleged involvement in one of the most famous cavalry raids of the war. At about two o’clock in the morning on March 9, 1863, Mosby and twenty-nine of his partisan rangers slipped past Union pickets and into Fairfax Court House, where the headquarters of General Stoughton and his cavalry commander, Colonel Percy Wyndham, was located. Stoughton was literally “caught napping,” as the Baltimore American newspaper later charged, and a number of his men and horses were also captured. Afterward, United States president Abraham Lincoln quipped that he could spare the general but not the horses, which were more expensive. Wyndham, who earlier had labeled Mosby a common horse thief, was spared the indignity; he was in Washington, D.C., that night.

An investigation into the incident by Lafayette C. Baker, head of the U.S. Secret Service, immediately focused on Ford. Stoughton’s mother, his sister, and three of his aides had stayed in Ford’s home, and the twenty-four-year-old Stoughton was said to have socialized with Ford. On March 14, 1863, an anonymous letter appeared in the New York Times accusing the general and Ford of having been “very intimate.” In fact, the writer claimed to have thought before the raid, “If he [Stoughton] gets picked up some night, he may thank her for it.” Ford—along with her father and perhaps as many as ten others—was arrested and charged with espionage on the weight of a confession she was said to have given to a female agent named Frankie Abel, whom Baker dispatched to Fairfax in the guise of a Confederate refugee from New Orleans. Union authorities also pointed to Ford’s 1861 commission from Stuart, which they found in her house, as proof she was in the employ of Confederates.

Nevertheless, the fact of Ford’s participation in the planning of the raid has been disputed over the years. Stoughton, who first became ill at Libby Prison in Richmond and died in 1868, wrote to Mosby in 1867 requesting that his old foe clear Ford of any involvement. Historian James A. Ramage, in his 1999 biography of Mosby, speculated that Mosby complied because Stoughton’s brother later wrote a letter of recommendation for a political appointment Mosby was seeking. Ramage also cited a letter Mosby wrote to a friend in 1900, which stated that Ford was “as innocent as Abraham Lincoln.” While most histories credit Ford’s role, Ramage concluded that the accusations against her were “not valid.”

Ford was confined at Old Capitol Prison in Washington, D.C., which at various times also held Confederate spies Belle Boyd and Rose Greenhow. Within a matter of months, however, Ford was released, perhaps in part because of lobbying on her behalf by her arresting officer, Major Joseph Willard. In a twist of fate that remarkably echoes Boyd’s story, Ford fell in love with her captor and married him on March 10, 1864. Willard, a Vermont native who was part owner of the famous Washington, D.C., hotel that bore his family’s name, resigned from the army; Ford took an oath of allegiance to the United States. The two settled in the capital and had three children, only one of whom survived infancy. Ford died on February 14, 1871. Her son, Joseph Edward Willard, served on the staff of Fitzhugh Lee, Confederate general Robert E. Lee’s nephew, during the Spanish-American War (1898). He also served as a member of the Virginia House of Delegates (1893–1901), lieutenant governor of Virginia (1902–1906), and United States ambassador to Spain (1913–1921) during the administration of U.S. president Woodrow Wilson.