John Buchanan Floyd was born on the Smithfield plantation in Montgomery County, Virginia, on June 1, 1806, the son of John Floyd, who was governor of Virginia (1830–1834) during the Nat Turner Insurrection. He attended South Carolina College, where he studied law, and after graduating in 1829, practiced for a brief period in Abingdon, Virginia. In 1830 he married his cousin, Sally Buchanan Preston, granddaughter of General William Campbell, who led the defeat of British forces at the Battle of King’s Mountain during the American Revolution, and sister of William C. Preston (1794–1860), a senator from South Carolina. Caught up in the excitement of the cotton boom, Floyd and one of his brothers relocated to Arkansas, where they invested in a cotton plantation. While this enterprise was initially profitable, the panic of 1837 left Floyd with massive debts and he lost the plantation. A fever, meanwhile, killed many of Floyd’s slaves and, very nearly, Floyd himself. He returned to Abingdon and successfully practiced law.

A Democrat, Floyd was elected to the General Assembly in 1847, and in 1849 that body voted him governor of Virginia on a promise of internal improvements aimed especially at the state’s western counties. He immediately called for a state constitutional convention, which met in Richmond from October 14, 1850, until August 1, 1851. Known as the Reform Convention, it took up several unresolved controversies from the 1829–1830 convention, in particular the apportionment of representation to the General Assembly and the qualifications for suffrage. In the end, the poorer, less powerful western portion of the state gained some representation against the eastern portion, and, in another victory for westerners, property restrictions for suffrage were eliminated. The election of governor was also turned over to the people, and the executive’s term increased from three to four years. 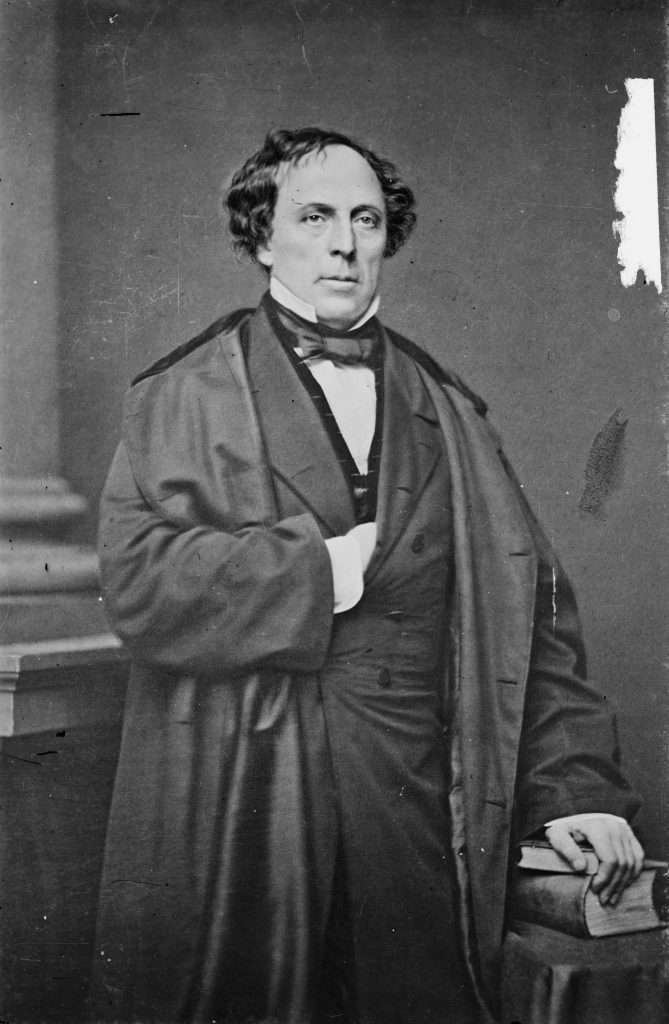 After his three-year term, Floyd retired from politics to practice law again, but in 1855 he sprang to the defense of the Democratic Party in its battle against the insurgent Know-Nothing Party. The Know-Nothings were mostly young, white Protestants who rushed in to fill the gap left by the collapsed Whig Party. Their views tended to be anti-liquor, anti-Catholic, and anti-immigration, which meant that they were a threat to the Democrats, whose rolls were being filled by many hard-drinking Catholic emigrants from Europe. Partly as a reward for his staunch service, the newly elected Democratic president, James Buchanan, appointed Floyd secretary of war in 1857.

In an administration viewed as corrupt and ineffective, Floyd’s tenure at the War Department nevertheless stood out. Critics accused him of shady dealings involving padded government contracts that were then used as collateral for bonds from an Indian trust fund at the Department of the Interior. In 1860, he appointed a family member—Joseph E. Johnston, a cousin through marriage—quartermaster general of the army over more senior men, including Robert E. Lee and Albert Sidney Johnston, making enemies of these future Confederate generals as well as the future Confederate president and former secretary of war, Jefferson Davis. (The dispute would follow Davis to Richmond during the war, when in 1861 he ranked A. S. Johnston and Lee above J. E. Johnston.) As the secession crisis heated up, Northerners additionally accused Floyd of funneling arms and supplies from Northern to Southern armories. Finally, after disagreements with Buchanan over the Fort Sumter crisis in December 1860, Floyd resigned his position on December 29 and returned to Virginia. There, he recruited a brigade of troops after the state’s secession on May 23, 1861, and was commissioned a brigadier general.

During the Civil War

Floyd’s military career began in western Virginia. If he had once served the region well politically, he was less effective militarily. As head of the 3,500-man Army of the Kanawha, he spent much of his time during the late summer and autumn of 1861 bickering with Brigadier General Henry A. Wise, another former governor of Virginia. Under Lee’s leadership, the Confederates lost much of what is now West Virginia, and in the winter of 1861, Floyd was transferred west. There, General Albert Sidney Johnston assigned him to command Fort Donelson, an ill-defended, fifteen-acre fortification on the Cumberland River in Tennessee.

Floyd arrived on February 13, 1862, just in time for the fort to come under attack by a combined navy and army task force under Ulysses S. Grant. After Union ironclads surprisingly were repulsed, Grant laid siege. In the icy wind and rain of February 15, Confederates attempted to break out, and the fierce fighting left almost a thousand combined dead on both sides and the Confederate troops under Floyd still trapped. Historians have since charged Floyd with indecision and even a lack of involvement, both in planning and in leading the fighting; and when it came time to surrender, he fled. He and his second in command, Gideon Pillow, were both political generals, and Floyd, because of his controversial tenure as secretary of war, was especially fearful of being taken prisoner. As a result, he and 1,500 Virginia troops escaped to Nashville, Tennessee, in the middle of the night, leaving command to Pillow. He in turn passed it on to Brigadier General Simon B. Buckner, who then was forced to accept Grant’s famous demand of “unconditional surrender.”

The following month, after Floyd had helped to evacuate Nashville—the first Confederate capital to fall to Union forces—he was relieved of command by Davis, without even the courtesy of a court of inquiry. Floyd returned to Abingdon, and the state government of Virginia appointed him a major general in the militia. He campaigned around the Big Sandy River with partisan bands, but the hardship and fatigue harmed his already poor health. Floyd died at his adopted daughter’s house on August 23, 1863.

RELATED CONTENT
Categories:
Type:
Related SOLs:
MAP
TIMELINE
June 1, 1806
John B. Floyd is born at the family home of Smithfield, in Montgomery County.
1829
John B. Floyd graduates from South Carolina College.
1830
John B. Floyd marries his cousin, Sally Buchanan Preston.
1834
John B. Floyd becomes a lawyer in Abingdon.
1834
Lured by the cotton boom, John B. Floyd and his brother journey to Arkansas and raise cotton at a plantation they name Swan Lake.
1837
The economic downturn and panic of 1837 wipe out John B. Floyd's Arkansas holdings, while a severe and prolonged fever nearly kills him.
1837
John B. Floyd recuperates from a prolonged illness at his brother G. R. C. Floyd's home, Burke's Garden, in Tazewell.
1840
John B. Floyd returns to Abingdon, where he becomes a successful lawyer.
1847
John B. Floyd is elected to the General Assembly to represent Abingdon, where he supports internal improvements.
1848
John B. Floyd is elected governor of Virginia largely on widespread support for his focus on internal development. He begins his term on January 1, 1849.
1852
His term as governor over on January 1, John B. Floyd once again returns to Abingdon to practice law, having ostensibly retired from the political arena.
1855
In the face of the popular Know-Nothing Party, John B. Floyd returns to politics as a States' Rights Democrat, supporting Democrat Henry A. Wise for governor. Floyd wins a seat in the General Assembly to represent Washington County. Many attribute the success of the Democrats in defeating the Know-Nothings to the exertions of Floyd.
1857
John B. Floyd is named to President James Buchanan's cabinet as secretary of war.
December 29, 1860
John B. Floyd resigns as U.S. secretary of war over disagreements with President James Buchanan's handling of the Fort Sumter crisis.
February 18, 1861
The U.S. House Committee on Military Affairs alleges that before John B. Floyd left his post as U.S. secretary of war, he illicitly transferred war department arms from the North to armories in the South, thus arming the incipient rebellion. Floyd is also accused of questionable dealing involving Indian trusts, but he's exonerated on both charges.
May 23, 1861
John B. Floyd is appointed brigadier general in the Confederate army.
August—November 1861
John B. Floyd leads his Confederate brigade in a number of small skirmishes at Carnifex Ferry and Gauley Bridge.
August 11, 1861
John B. Floyd receives command of the Confederate Army of the Kanawha, stationed in western Virginia.
December 1861
John B. Floyd and his brigade of Confederate troops are sent west to join the forces of Confederate general Albert Sidney Johnston near Bowling Green, Kentucky.
February 13, 1862
John B. Floyd arrives at Fort Donelson, Tennessee, just in time to come under attack by Union brigadier general Ulysses S. Grant, who lays siege to the fort the next day.
February 14, 1862
Union general Ulysses S. Grant lays siege to Fort Donelson, Tennessee.
February 15, 1862
Confederate troops under John B. Floyd attempt to break out from Fort Donelson, Tennessee, but remain trapped by the strength of the Union siege laid by Ulysses S. Grant.
February 16, 1862
Confederate generals John B. Floyd and John A. McCausland evacuate their men from Fort Donelson, Tennessee, in the early morning hours, leaving General Simon Bolivar Buckner to surrender the fort. The evacuation of Donelson will destroy Floyd's military career, but McCausland receives little criticism.
March 11, 1862
Despite John B. Floyd's claims that he fled Fort Donelson, Tennessee, because he thought Union troops would hang him as a traitor because of the controversy surrounding his time as U.S. secretary of war, Confederate president Jefferson Davis summarily dismisses Floyd from Confederate service.
April 16, 1862
John B. Floyd is appointed a major general of the Virginia militia.
April 1862—August 1863
John B. Floyd recruits partisans and keeps loyalists under control in southwestern Virginia.
August 23, 1863
His health broken by fever from his Arkansas days and recent military operations, John B. Floyd dies.
FURTHER READING
CITE THIS ENTRY