Thomas Benton Fitzgerald was born on August 23, 1840, in Halifax County and was the son of Alfred B. Fitzgerald and his first wife, Theodosia Lipscomb Fitzgerald. He attended a local school and then began an apprenticeship under his father, who was a building contractor. After Virginia seceded from the Union, Fitzgerald enlisted on May 31, 1861, in Pittsylvania County in Company A of the 38th Virginia Infantry Regiment. He served less than five months before being sent to a Richmond hospital on October 24. Issued a surgeon’s certificate of disability, he was discharged from Confederate service on October 28. By September 1865 Fitzgerald had become a merchant in Pittsylvania County and received a license to sell wine and liquor. On January 14, 1868, in Danville he married Martha Jane Hall. Of their seven children, three daughters and two sons lived to adulthood. His wife died on February 26, 1917. 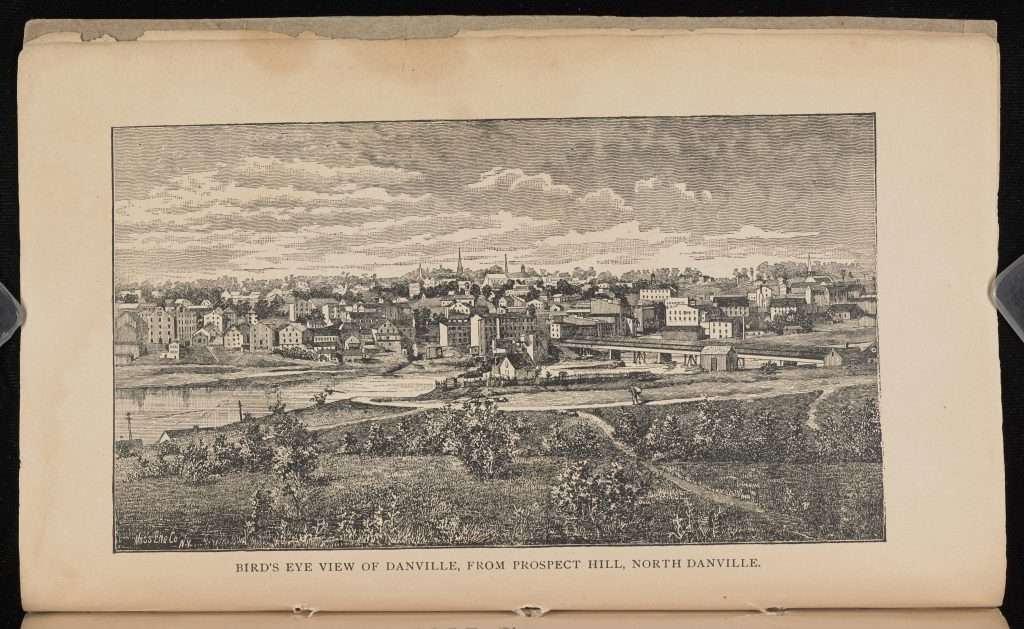 By 1872 Fitzgerald and a partner had opened the Danville brick-making and construction business of T. B. Fitzgerald and Co., which they incorporated in 1885. Their construction ventures included erecting industrial facilities, such as warehouses and factory buildings, as well as some of the city’s most notable churches and houses. Branching out into other businesses, Fitzgerald acquired water-power rights along the Dan River. He helped found the Riverside Cotton Mills, incorporated in August 1882, and became its largest stockholder. Fitzgerald served as its first president but did not receive a salary. His compensation came through contracts awarded to his construction company for the Riverside Cotton Mills’ new building and expansion projects. Robert A. Schoolfield, the treasurer and secretary, managed the mills’ daily operations.

Both the Riverside Cotton Mills and Danville itself grew tremendously during Fitzgerald’s leadership of the company. What was initially one mill producing yarn and cloth on 2,240 spindles and 100 looms in April 1883 expanded with the building of two new mills and the acquisition of a rival company in 1890. By the following year, four mills operated 36,432 spindles and 1,246 looms. The company’s expansion helped fuel Danville’s population growth from 7,526 in 1880 to 10,305 in 1890, the year the General Assembly incorporated it as a city. Fitzgerald also helped foster the city’s cultural and economic growth during this period. In 1883 he served as a vice president on a board that established the Danville College for Young Ladies, and three years later he formed the Danville Street Car Company. Venturing into land development and real estate acquisition, he established the Danville Industrial and Land Improvement Company in 1889 and the Riverside Development Company of North Danville the following year. In 1901 Fitzgerald deeded his house, valued at $20,000, to the Danville Orphanage. The next year he served as a director of the Danville Lumber and Manufacturing Company.

With the increasing success of the Riverside Cotton Mills, Fitzgerald became frustrated by his lack of salary and demanded a fixed annual sum. He resigned and returned to the presidency on two separate occasions. In response to Fitzgerald’s first resignation in January 1890, the board gave him a lump sum of $1,500 for previous supervisory work and agreed to an annual salary of $1,000. Fitzgerald resigned a second time in April 1891 but was persuaded to resume his office shortly thereafter. In 1893 the board set his annual compensation at $7,500, which included $2,500 for construction management.

Fitzgerald served as the first president of the Dan River Power and Manufacturing Company, chartered in July 1895. The Riverside Cotton Mills became that company’s majority shareholder, which allowed for both businesses to operate with the same officers. In 1896 Fitzgerald finished the Riverside Cotton Mills’ building program with the construction of a seventh mill. In January 1899 he resigned for the third and final time, after the board decided to make the presidency a nominal position without pay. During his tenure as president, company sales had increased from $130,000 in 1884 to $1,785,000 in 1899, and net earnings had increased from $6,000 in 1883 to $369,000 in 1899. The year he resigned the mills produced more than 44 million linear yards of cloth on almost 68,000 spindles and more than 2,500 looms.

The Riverside and Dan River Cotton Mills thrived through most of the twentieth century. It became Dan River Mills, Inc., in 1946 and Dan River Inc. in 1970 and remained the city’s largest employer. The influx of cheaper foreign fabrics began to erode company profits, however, and after bankruptcies in 2004 and 2008, Dan River Inc. stopped production. The Riverside Division of the company, site of the former Riverside Cotton Mills constructed by Fitzgerald, was placed on the National Register of Historic Places in 2000.

Ailing from pneumonia and influenza, Fitzgerald died on January 5, 1929, in his Danville home. He was buried at Leemont Cemetery.