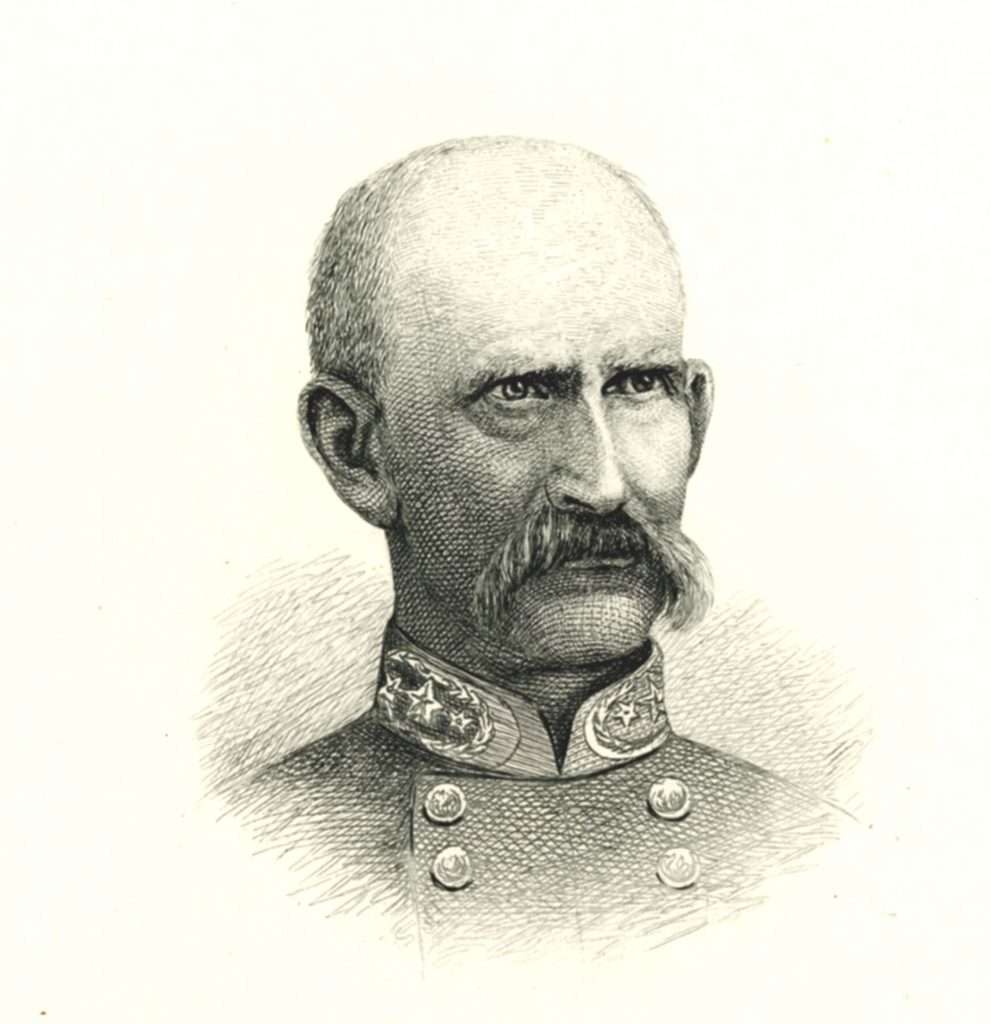 The unit’s seventy members elected Pendleton to train the battery after its first captain, John A. McCausland, a mathematics professor at the Virginia Military Institute in Lexington, was sent to train troops gathering in Charles Town, Virginia. The unit’s initial armament consisted of two six-pounder cannon from VMI and two more cannon from Richmond. On May 11, the battery proceeded to Harpers Ferry to join the Virginia brigade of Confederate general Thomas J. Jackson.

On July 18, Confederate forces, including Jackson’s brigade and the Rockbridge Artillery, started east to unite with Confederate general P. G. T. Beauregard‘s forces at Manassas Junction. On July 21, at the First Battle of Manassas, the battery helped defend the critical position at Henry House Hill. The brigade’s stand would earn it, and its commander, the sobriquet “Stonewall.” During the Union retreat, the battery even received a visit from Confederate president Jefferson Davis, who had traveled to Manassas to witness the fight personally. After the victory, the Rockbridge Artillery acquired a new complement of cannon that the Confederates had captured from the Union troops.

Later in July, Pendleton received a promotion to chief of artillery and Captain William McLaughlin assumed command of the battery. In November, the Rockbridge Artillery returned to the Shenandoah Valley to rejoin Jackson’s command. During the winter of 1861 and 1862, the battery participated in Jackson’s ill-fated Romney Campaign. At the Battle of Kernstown on March 23, 1862, it assisted in holding Union forces in check during the Confederate retreat but lost a six-pounder cannon and caisson in the process. In April, Captain William T. Poague assumed command of the battery. On June 9, 1862, at the Battle of Port Republic, Poague and the Rockbridge Artillery helped prevent the capture of Jackson as he fled U.S. soldiers pouring into the town. The unit deployed its guns, drove the Union troops out, and then later assisted in their pursuit.

Later that month, Jackson and the rest of his command joined the Army of Northern Virginia outside Richmond but did not participate in any of the Seven Days’ Battles except for Malvern Hill. There, Confederate batteries, including the Rockbridge Artillery, proceeded into the fight piecemeal, allowing the Union batteries to concentrate their fire against the isolated Confederate guns. The Rockbridge Artillery expended all of its ammunition during Malvern Hill, but because it had been emplaced well, it suffered fewer casualties than did other batteries engaged.

On August 29, 1862, at the Second Battle of Manassas, Union general John Pope hurled his troops against Jackson’s line. The Rockbridge Artillery fought side by side with the infantry in repulsing the attacks. The next day the battery shifted to the right and assisted in repulsing renewed attacks against Jackson’s front. On September 17, at the Battle of Antietam, the Rockbridge Artillery was positioned near the Dunkard Church where it endured such a severe counter-battery cross fire from Union artillery that some Confederate gunners dubbed the battle “artillery hell.” Although the battery was not as badly damaged as other units were, the ferocity of the fire prompted Robert E. Lee Jr., a member of the battery, to recall that the unit had been “severely handled” while aiding Confederate general J. E. B. Stuart‘s artillery fire on the Union flank. Lee also recalled that after the battle, his visage begrimed with powder and sweat, his own father, General Robert E. Lee, failed to recognize him. He remembered that “when he found out who I was, he congratulated me on being well and unhurt. I then said: ‘General, are you going to send us in again?’ ‘Yes, my son,’ he replied, with a smile: ‘You all must do what you can to help drive these people back.'” Defiantly, the Army of Northern Virginia would remain on the field for another day before prudently retreating.

Licking its wounds after the savagery of Antietam, the Army of Northern Virginia withdrew to Virginia. It faced the Army of the Potomac again at the Battle of Fredericksburg on December 13, 1862. The Rockbridge Artillery, split into two sections, deployed its long-range guns on the extreme right flank of the Confederate line to support the guns of Major John Pelham and its other pieces closer to the center of the Confederate right flank at Prospect Hill. The battery sustained losses of six killed, sixteen wounded, and thirty-seven horses killed during the battle.

In April 1863, Poague received a promotion and Captain Archibald Graham took command of the battery. During the Battle of Chancellorsville in May the battery fired 820 rounds in support of Confederate general Jubal A. Early‘s lines near Fredericksburg. The battery suffered few casualties.

The next month, Lee launched an invasion of the North that culminated in the Battle of Gettysburg on July 1–3, 1863. During the second and third day, the Rockbridge Artillery was positioned on Benner’s Hill to the northeast of Cemetery Hill. It participated in the artillery bombardment of Union lines in preparation for Pickett’s Charge. On the retreat back to Virginia after Gettysburg, the Rockbridge Artillery lost its baggage trains, as well as its sick and wounded, to Union cavalry who got in among the retreating Confederates. During the campaign, the unit suffered twenty casualties while firing 439 rounds.

The Rockbridge Artillery participated in the Battle of Spotsylvania Court House in May 1864 but was only lightly engaged during the remainder of the Overland Campaign. Once the fighting had reached Petersburg, the Rockbridge Artillery positioned itself near Drewry’s Bluff and New Market Heights. On July 27, while harassing Union gunboats on the James River during the First Battle of Deep Bottom, the battery lost four cannon when Union infantry drove off the battery’s supports. Four replacement tubes were quickly issued, and they continued to harass ship traffic on the James River for the remainder of the summer.

During the autumn, the Rockbridge Artillery manned entrenchments at Fort Harrison and Fort Gilmore along the Richmond line. On September 29, 1864, Union troops overran Fort Gilmore and then Fort Harrison; the Rockbridge Artillery withdrew from both positions without a loss. It went into winter quarters at Fort Alexander until the fall of Petersburg and Richmond on April 2, 1865. The battery kept up with the retreat, and on April 9, its 101 remaining officers and men surrendered along with the rest of the Army of the Northern Virginia at Appomattox Court House. Like many other Confederate units, the members of the Rockbridge Artillery tore up their flags and kept the pieces as mementoes rather than turn them over to the Union army.