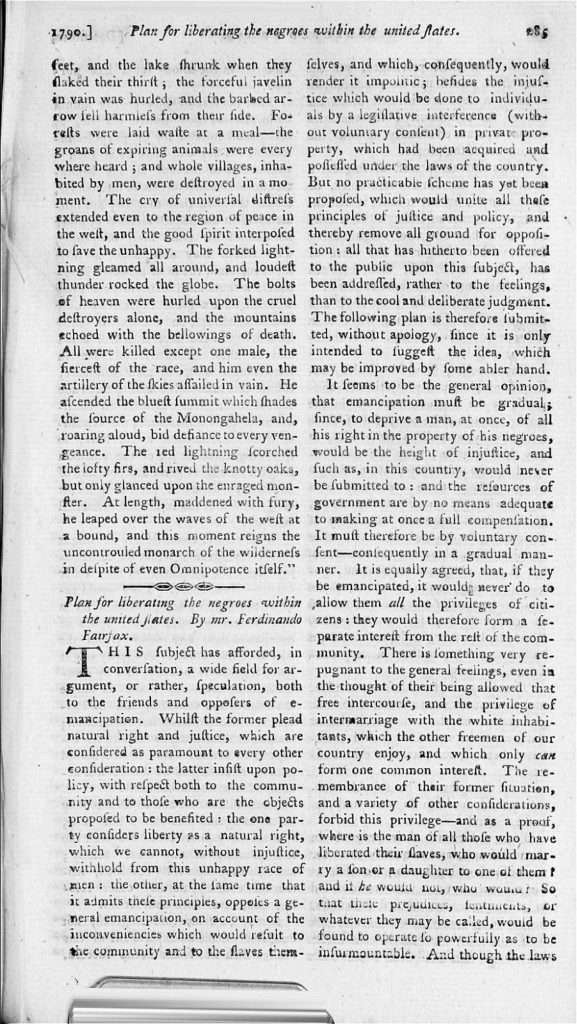 Plan for liberating the negroes within the united states. By mr. Ferdinando Fairfax.

This subject has afforded, in conversation, a wide field for argument, or rather, speculation, both to the friends and opposers of emancipation. Whilst the former plead natural right and justice, which are considered as paramount to every other consideration: the latter insist upon policy, with respect both to the community and to those who are the objects proposed to be benefited: the one party considers liberty as a natural right, which we cannot, without injustice, withhold from this unhappy race of men: the other, at the same time that it admits these principles, opposes a general emancipation, on account of the inconveniences which would result to the community and to the slave themselves, and which, consequently, would render it impolitic; besides the injustice which would be done to individuals by a legislative interference (without voluntary consent) in private property, which had been acquired and possessed under the laws of the country. But no practicable scheme has yet been proposed, which would unite all those principles of justice and policy, and thereby remove all ground for opposition: all that has hitherto been offered to the public upon this subject, has been addressed, rather to the feelings, than to the cool and deliberate judgment. The following plan is therefore submitted, without apology, since it is only intended to suggest the idea, which may be improved by some abler hand.

It seems to be the general opinion, that emancipation must be gradual, since, to deprive a man, at once, of all his right in the property of his negroes, would be the height of injustice, and such as, in this country, would never be submitted to: and the resources of government are by no means adequate to making at once a full compensation. It must therefore be by voluntary consent—consequently in a gradual manner. It is equally agreed, that, if they be emancipated, it would never do to allow them all the privileges of citizens: they would therefore form a separate interest from the rest of the community. There is something very repugnant to the general feelings, even in the thought of their being allowed that free intercourse, and the privilege of intermarriage with the white inhabitants, which other freemen of our country enjoy, and which only can form one common interest. The remembrance of their former situation, and a variety of other considerations, forbid this privilege—and, as a proof, where is the man of all those who have liberated their slaves, who would marry a son or a daughter to one of them? and if he would not, who would? So that these prejudices, sentiments, or whatever they may be called, would be found to operate so powerfully as to be insurmountable. And though the laws 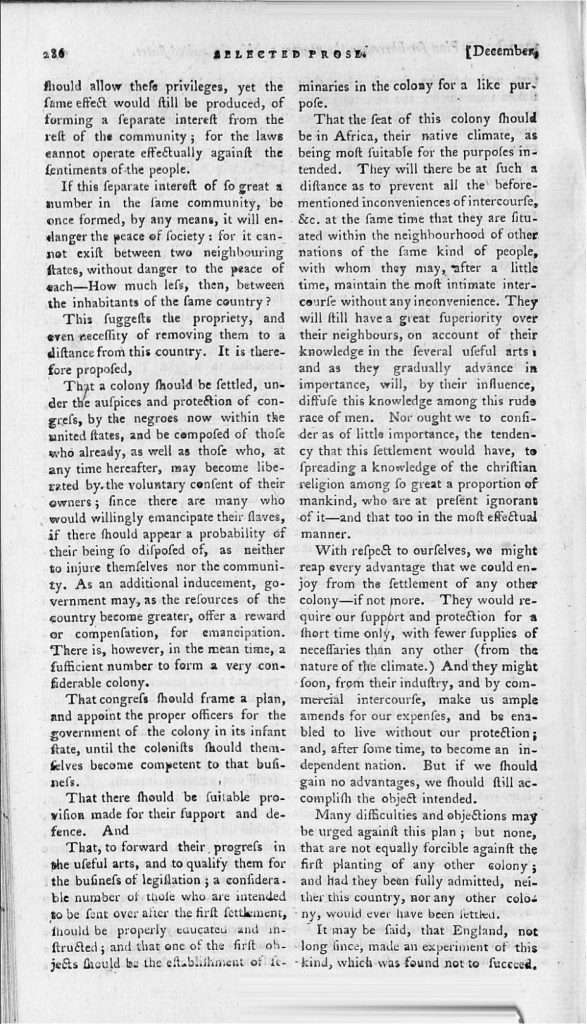 should allow these privileges, yet the same effect would still be produced, of forming a separate interest from the rest of the community; for the laws cannot operate effectually against the sentiments of the people.

If this separate interest of so great a number in the same community, be once formed, by any means, it will endanger the peace of society: for it cannot exist between two neighbouring states, without danger to the peace of each—How much less, then, between the inhabitatns of the same country?

This suggests the propriety, and even necessity of removing them to a distance from this country. It is therefore proposed,

That a colony should be settled, under the auspices and protection of congress, by the negroes now within the united states, and be composed of those who already, as well as those who, at any time hereafter, may become liberated by the voluntary consent of their owners; since there are many who would willingly emancipate their slaves, if there should appear a probability of their being so disposed of, as neither to injure themselves nor the community. As an additional inducement, government may, as the resources of the country become greater, offer a reward or compensation, for emancipation. There is, however, in the mean time, a sufficient number to form a very considerable colony.

That congress should frame a plan, and appoint the proper officers for the government of the colony in its infant state, until the colonists should themselves become competent to that business.

That there should be suitable provision made for their support and defence. And

That, to forward their progress in the useful arts, and to qualify them for the business of legislation; a considerable number of those who are intended to be sent over after the first settlement, should be properly educated and instructed; and that one fo the first objects should be the establishment of seminaries in the colony for a like purpose.

That the seat of this colony should be in Africa, their native climate, as being most suitable for the purposes intended. They will there be at such a distance as to prevent all the before-mentioned inconveniences of intercourse, &c. at the same time that they are situated within the neighbourhood of other nations of the same kind of people, with whom they may, after a little time, maintain the most intimate intercourse without any inconvenience. They will still have a great superiority over their neighbours, on account of their knowledge in the several useful arts: and as they gradually advance in importance, will, by their influence, diffuse this knowledge among this rude race of men. Nor ought we to consider as of little importance, the tendency that this settlement would have, to spreading a knowledge of the christian religion among so great a proportion of mankind, who are at present ignorant of it—and that too in the most effectual manner.

With respect to ourselves, we might reap every advantage that we could enjoy from the settlement of any other colony—if not more. They would require our support and protection for a short time only, with fewer supplies of necessaries than any other (from the nature of the climate.) And they might soon, from their industry, and by commercial intercourse, make us ample amends for our expenses, and be enabled to live without our protection; and, for some time, to become an independent nation. But if we should gain no advantages, we should still accomplish the object intended.

Many difficulties and objections may be urged against this plan; but none, that are not equally forcible against the first planting of any other colony; and had they been fully admitted, neither this country, nor any other colony, would ever have been settled.

It may be said, that England, not long since, made an experiment of this kind, which was found not to succeed. 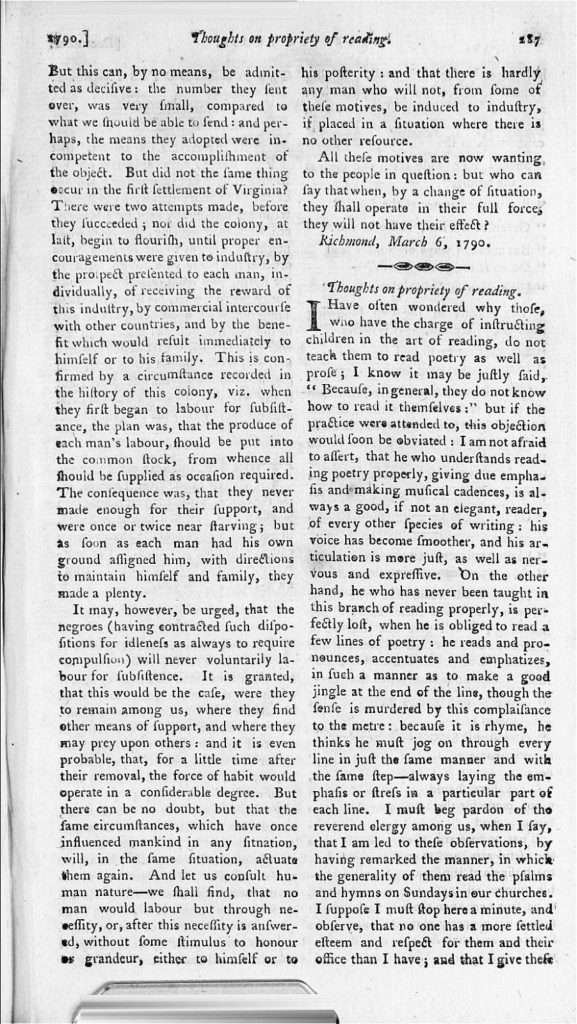 But this can, by no means, be admitted as decisive: the number they sent over, was very small, compared to what we should be able to send: and perhaps, the means they adopted were incompetent to the accomplishment of the object. But did not the same thing occur in the first settlement of Virginia? There were two attempts made, before they succeeded; nor did the colony, at last, begin to flourish, until proper encouragements were given to industry, by the prospect presented to each man, individually, of receiving the reward of this industry, by commercial intercourse with other countries, and by the benefit which would result immediately to himself or to his family. This is confirmed by a circumstance recorded in the history of this colony, viz. when they first began to labour for subsistence, the plan was, that the produce of each man’s labour, would be put into the common stock, from whence all should be supplied as occasion required. The consequence was, that they never made enough for their support, and were once or twice near starving; but as soon as each man had his own ground assigned him, with directions to maintain himself and family, they made a plenty.

It may, however, be urged, that the negroes (having contracted such dispositions for idleness as always to require compulsion) will never voluntarily labour for subsitence. It is granted, that this would be the case, were they to remain among us, where they find other means of support, and where they may prey upon others: and it is even probable, that, for a little time after their removal, the force of habit would operate in a considerable degree. But there can be no doubt, but that the same circumstances, which have once influenced mankind in any sit[u]ation, will, in the same situation, actuate them again. And let us consult human nature—we shall find, that no man would labour but through necessity, or, after this necessity is answered, without some stimulus to honour or grandeur, either to himself or to his posterity: and that there is hardly any man who will not, from some of these motives, be induced to industry, if placed in a situation where there is no other resource.

All these motives are now wanting to the people in question: but who can say that when, by a change of situation, they shall operate in their full force, they will not have their effect?