By 1960, African Americans comprised two-fifths of the population of Prince Edward County, yet the county had no black elected representatives. Blacks earned less than half as much as whites, and many lived in poverty. Professional employment was virtually closed to black workers. Law and tradition barred blacks from movie theaters, country clubs, and lunch counters; dictated racially segregated entrances and waiting areas in public accommodations; and proscribed social interactions to reinforce racial hierarchy.

White segregationists were steadfast about maintaining racial divides in the classroom. When a federal appeals court ordered the county to desegregate its all-white high school by September 1959, white leaders established a segregated private school system for white children and the county board of supervisors refused to allocate funds to operate public schools. Hundreds of black children boarded with family, friends, and strangers outside the county to obtain an education, but hundreds more remained home without access to formal schooling. The NAACP challenged the school closings in federal court in the case Allen v. School Board of Prince Edward County and later Griffin v. School Board of Prince Edward County, but state and county attorneys used every tactic available to slow the case’s progress. The NAACP became captive to the judicial system’s deliberate pace, and as years passed, black education continued to erode.

The school closings had not elicited an organized direct-action campaign earlier because the black community had conformed to the NAACP’s strategy of fighting inequality through litigation. By the spring of 1963, however, that approach appeared antiquated. Direct-action campaigns, like those in Birmingham and Danville, had changed the landscape of the civil rights movement: the protests, and the police brutality that accompanied them, had stirred the conscience of the black community. The Reverend L. Francis Griffin, pastor of First Baptist Church in Farmville and president of the Virginia State Conference of the NAACP, sought to capitalize on the “Negro revolution” to effect racial progress. Late in June, Griffin convened a special meeting of the leaders of the Virginia State Conference in which they adopted a new approach. 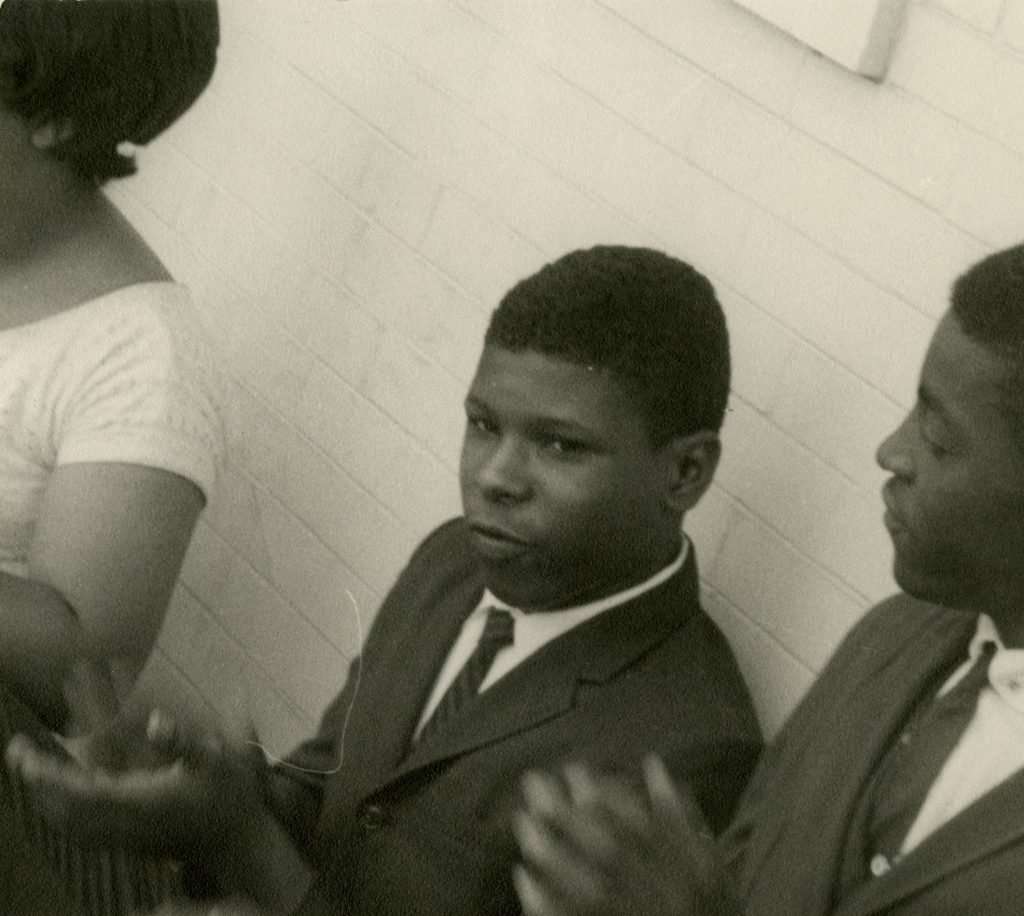 Under the new program of action, local branches of the NAACP were instructed to initiate selective buying campaigns, to petition their municipal government to desegregate, and, if their grievances were not addressed, to launch “freedom demonstrations.” Griffin sought to implement the program of action in Prince Edward County, but mobilizing the black community proved difficult: the fear of reprisal limited the activism of adults. Griffin, however, found a cadre of young people eager to participate in the broader civil rights revolution in order to bring change to their community. Members of the Student Nonviolent Coordinating Committee (SNCC), an independent organization of college students skilled in nonviolent protest tactics, trained the teenage volunteers, while NAACP attorneys advised them on how to respond to resistance from law enforcement officials.

The campaign initially targeted Farmville’s business district, the principal shopping center for Prince Edward and five surrounding counties. On Thursday, July 25, 1963, a group of seventy picketers, carrying homemade signs protesting segregation and the school closings, marched in front of downtown businesses, the county courthouse, and the nearby shopping center. The police were ordered not to interfere unless violence erupted. A contingent of white teenagers heckled the picketers, but there were no incidents and no arrests.

The campaign intensified the next day. Fifty teenagers resumed the marches from the day before, while others staged try-ins—a tactic where a black patron entered a department store and tried on items with no intention of buying them, thus wasting the store clerk’s time—and sit-ins at lunch counters. The luncheonettes, which included Rhue’s Diner, Southside Sundry, J. J. Newberry, the College Shoppe, and Chappell’s Fountain, refused to serve the black patrons. The manager at J. J. Newberry responded by closing the counter and removing the seats. Another group of demonstrators attempted to purchase tickets at the State Theater, but they were also refused service.

On July 27—a Saturday, which was the main shopping day in Farmville—the town’s mayor, Billy Watkins, denied Griffin’s application for a parade permit. Nevertheless, more than 100 people marched up and down Main Street and sang freedom songs. Ten demonstrators attempted a sit-in at the College Shoppe luncheonette, but were barred from entering. The group stood silently along the storefront and was soon arrested for loitering. (The five juveniles were released, as were three women who posted bond. Two men, the Reverend Richard Hale and Melvin Moore, refused bond and were jailed.) Afterward, Mayor Watkins informed Griffin that all future demonstrations would require a parade permit and that no permits would be issued on the weekends. 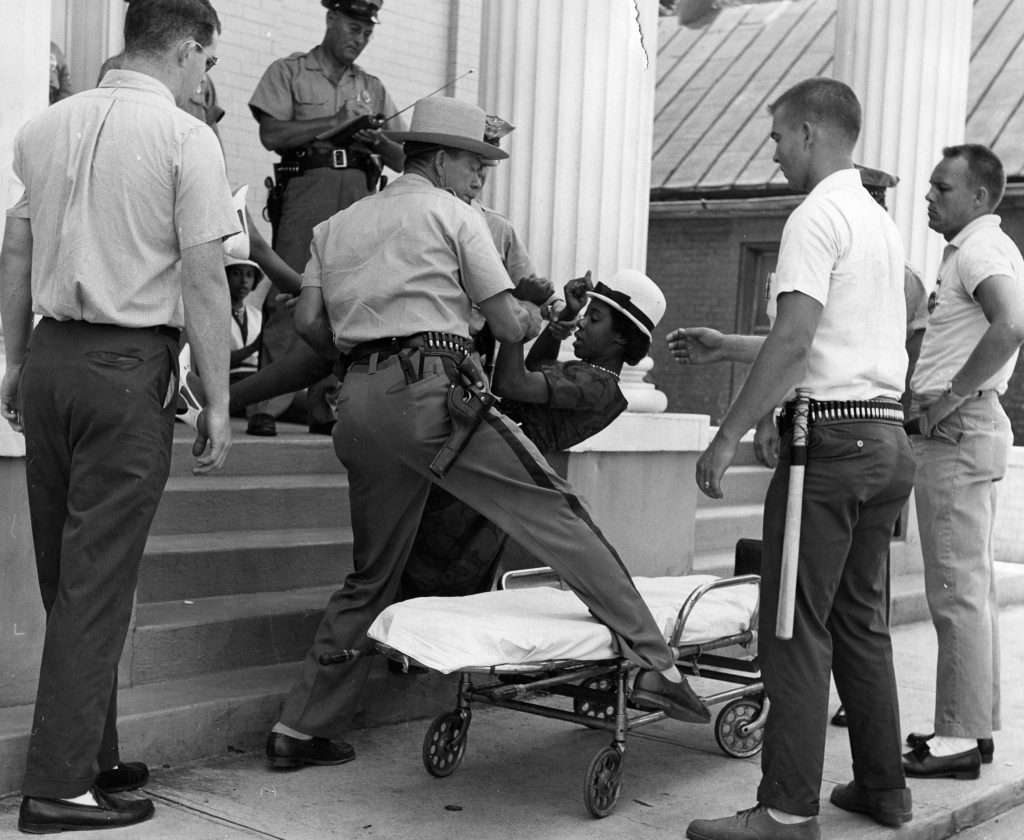 On Sunday, the demonstrators targeted four white churches for integration: Johns Memorial Episcopal Church, the Wesleyan Methodist Church, Farmville Presbyterian Church, and Farmville Baptist Church. Prince Edward’s white clergy had been largely silent on the school closings and racial discrimination, and the demonstrators were resolved to force white congregations to confront segregation. The demonstrators, divided into four groups, were able to enter Johns Memorial Episcopal, were asked to leave Wesleyan Methodist, and arrived too late to attend service at Farmville Presbyterian. The Farmville Baptist Church, however, simply refused to admit the black worshippers, who, in response, remained on the church steps, praying and singing so loudly that they disrupted the service. The group of twenty-three was arrested for disturbing public worship. Griffin believed that the arrests “showed that the white ministers of this community and their congregations have failed to realize the moral issues connected with the integration movement,” but they also significantly diminished what had already been a small number of demonstrators.

The weekend arrests forced a change in strategy. Thereafter, Griffin reduced the threat of arrests by applying for and obtaining parade permits and observing local ordinances. His teenage volunteers still protested with try-ins and sit-ins, but left businesses when asked. Although these actions appeared conservative by the weekend’s standard, a new phase of the campaign had begun. Griffin was now focusing on exerting economic pressure on the business community. While demonstrators continued to picket downtown to discourage patrons from coming to Farmville, others initiated a boycott of businesses that practiced discrimination. 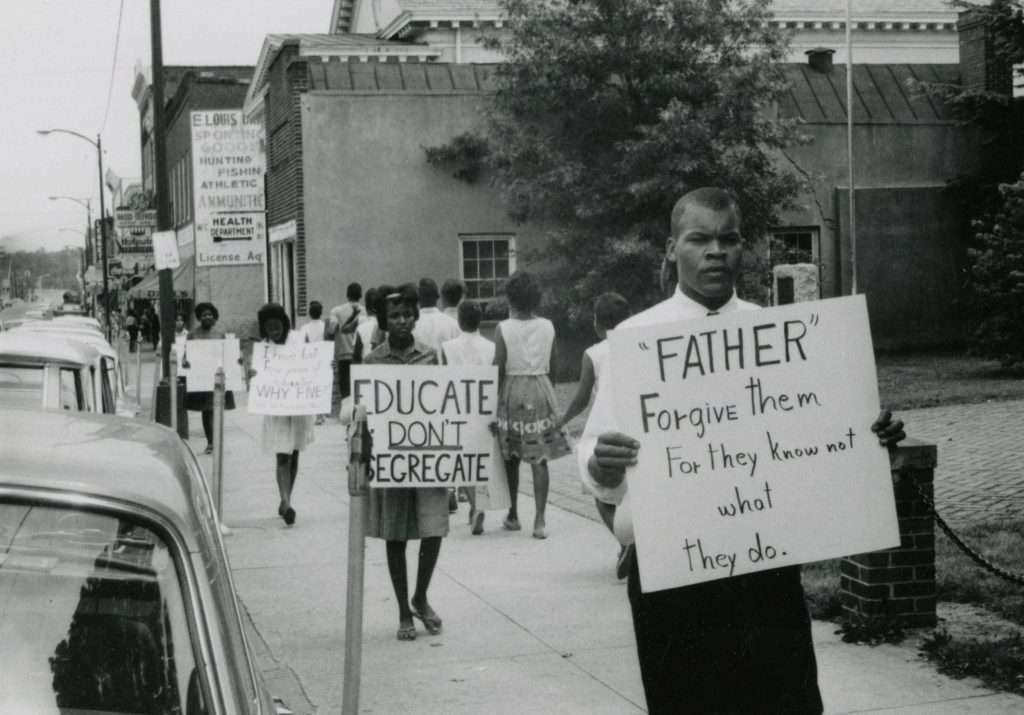 The following weekend, on Saturday, August 3, Mayor Watkins rejected the Reverend Goodwin Douglas’s application for a parade permit. Instead, the police roped off a one-block section of Main Street for protestors and warned Griffin that any demonstrators who crossed the line would be arrested. Douglas considered this arrangement a violation of his constitutional rights and challenged it by leading ten teenagers past the barricade and up Main Street to picket. They were arrested, as was another citizen a short time later, for parading without a permit. The campaign’s total number of arrests had risen to forty-four (twelve adults and thirty-two juveniles). 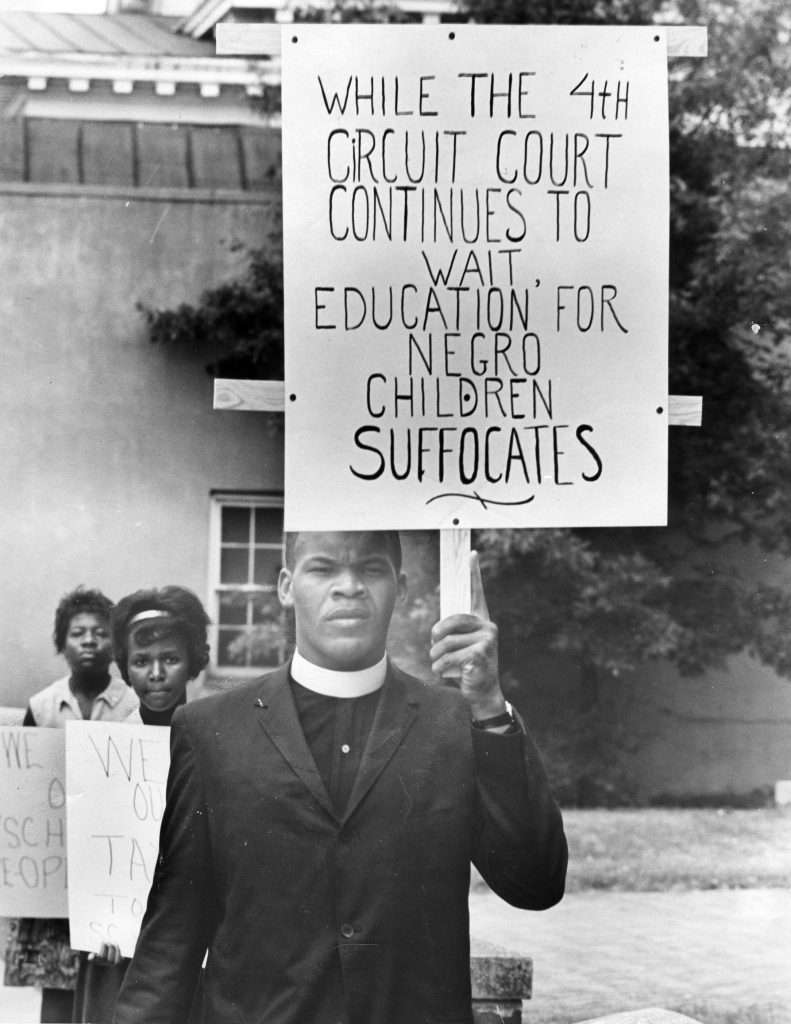 The second set of arrests marked a turning point in the Farmville campaign. Afterward, participation dropped and the media lost interest. The segregationists had been winning a war of attrition during the school crisis, and they were prepared to wait out the picketers as well. Some white residents believed that the demonstrations would stop after a “few hot-blooded” teenagers left town for school, reported the Washington Post. On August 12, 1963, the Fourth Circuit Court of Appeals ruled against the NAACP in Griffin v. School Board of Prince Edward County, finding that the county was not required by the Constitution to operate public schools. The NAACP soon appealed the case to the Supreme Court, but a hearing and final verdict were months away. In the meantime, black students would have to leave town again to continue their education, thus sapping the campaign’s strength.

Since May 1963, the Kennedy administration had been quietly negotiating an agreement to restore universal education to the county. The administration had won the support of Governor Albertis S. Harrison, and the county’s attorney agreed to use his influence to obtain approval for the lease of the public school buildings, which would allow the administration to establish a private, unsegregated school system with financial support from philanthropic foundations and private donations. On August 14, 1963, Governor Harrison announced the organization of the Prince Edward Free School Association, a nonprofit organization that would establish and maintain a system of integrated schools in Prince Edward County.

On August 15, 1963, the Prince Edward County Juvenile and Domestic Relations Court held hearings for the juveniles arrested in connection with the demonstrations. The court released the teenagers into the custody of their parents, but ordered them to observe a 10:00 p.m. curfew, refrain from disorderly picketing, maintain good behavior, and “attend school if such be possible.” Still, the court’s order did not break the resolve of the teenage activists. They pressed to continue picketing after school and on the weekends, but Griffin counseled them to focus on their studies. He expressed optimism that the Supreme Court would rule favorably on the school case and that the civil rights bill would become law. The energy of the black community was diverted to organizing the Free Schools, which opened on September 16, 1963. Afterward, the demonstrations dissipated.

The Farmville campaign yielded mixed results. The campaign’s primary goal was reopening the public schools on a nondiscriminatory basis. That was not immediately accomplished, but the Free Schools temporarily filled the void and Griffin had obtained the Kennedy administration’s assurance of continued legal support. In May 1964, the U.S. Supreme Court ruled in Griffin v. County Board of Prince Edward County that the school closings were unconstitutional. In September 1964, public education resumed in Prince Edward County. 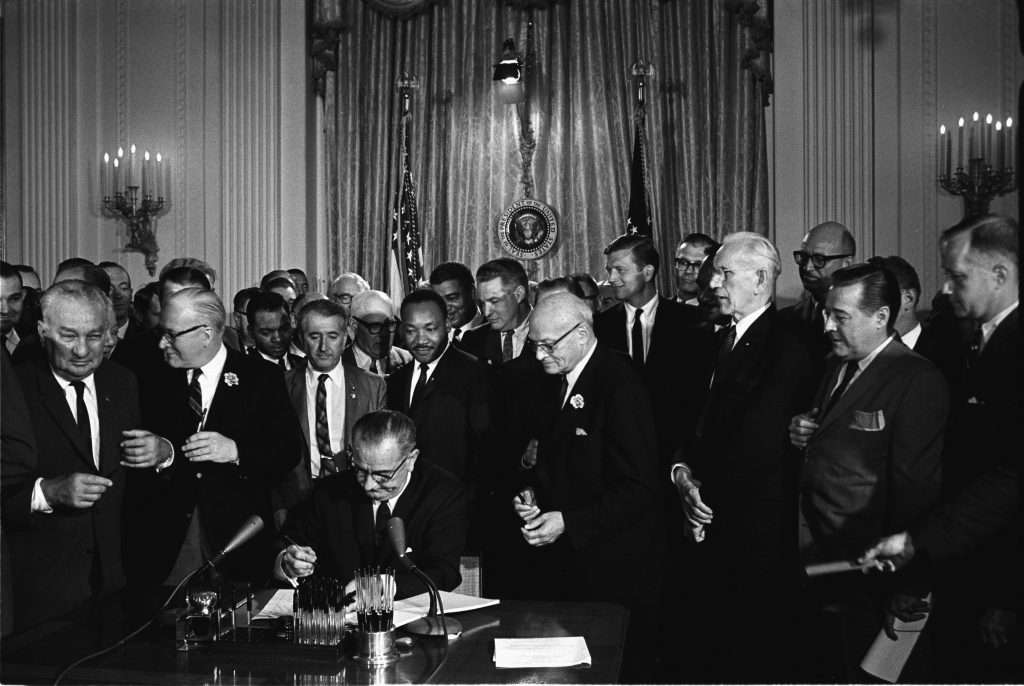 The campaign also attacked Jim Crow more broadly. The boycott and picketing of storefronts demonstrated the black community’s economic power and brought attention to discriminatory hiring practices. At the close of the campaign, a delegation of black leaders won concessions from local businessmen to promote African Americans to sales positions and to hire more blacks in general. Hiring discrimination and discrimination in restaurants, theaters, and other public accommodations were outlawed when the Civil Rights Act of 1964 was signed into law by President Lyndon B. Johnson. African Americans immediately tested Farmville’s compliance, and these new patrons were met with courtesy at restaurants and the theater.

Despite these achievements, progress toward equal rights for whites and blacks was slow in Prince Edward County. Public education was restored in 1964, but with inadequate funding and a nominal white enrollment. Voluntary concessions and force of federal law opened opportunities for African Americans in public accommodations, but poverty prevented many blacks from enjoying the fruits of the summer of protest. Although federal law barred hiring discrimination, African Americans were employed for professional positions at a slow rate. Still, the Farmville campaign demonstrated that the black community would no longer accept living in a Jim Crow society.