Richard Stoddert Ewell was born February 8, 1817, in Georgetown, near Washington, D.C., to Dr. Thomas and Elizabeth Stoddert Ewell and was raised on a farm called Stony Lonesome in Prince William County. He attended the U.S. Military Academy at West Point (finishing thirteenth in his class in 1840) and performed with distinction during the Mexican War (1846–1848). When Virginia seceded from the Union in 1861, he resigned his commission in the U.S. Army. After serving effectively in the First Manassas Campaign (1861), Ewell won laurels for his performance as Jackson’s most trusted subordinate during the Shenandoah Valley Campaign of 1862, performing well at the battles of Front Royal, First Winchester, Cross Keys, and Port Republic. 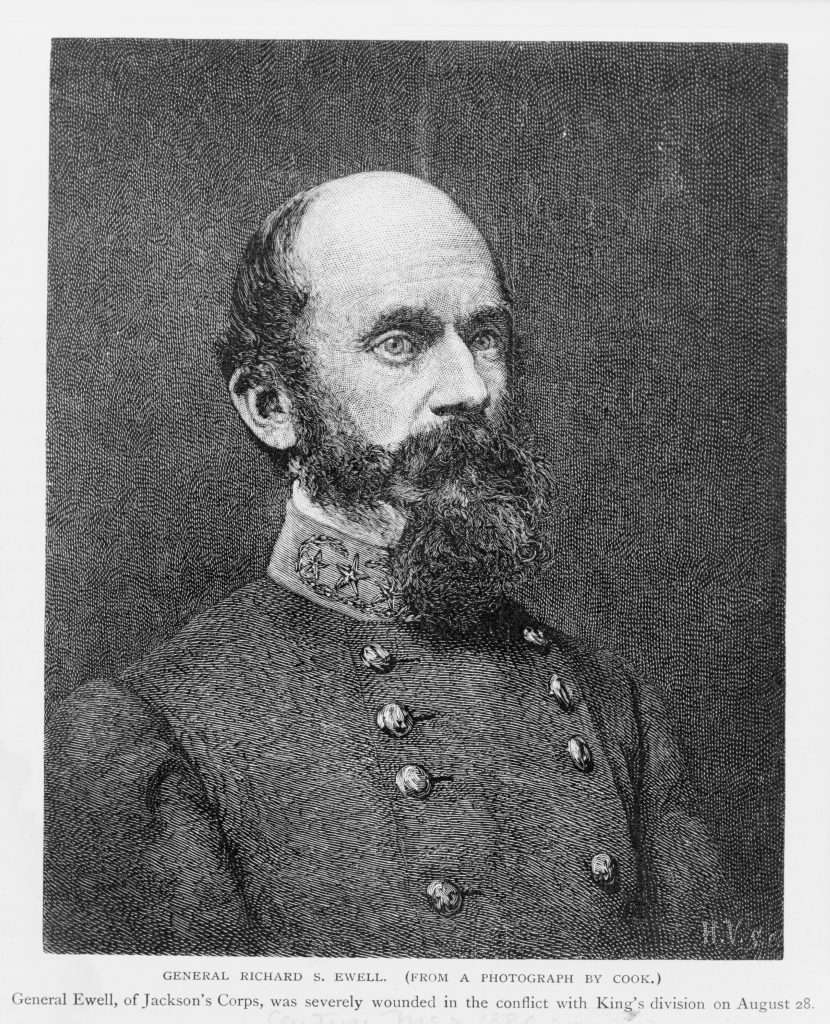 In many respects, Jackson and Lee were kindred spirits—reticent in personality, unrelentingly aggressive in war. Ewell, however, was different. In person, he was fiery, profane, and often funny. But unlike Jackson and Lee’s other top lieutenant, James Longstreet, Ewell developed a reputation for indecisiveness that cost him Lee’s confidence. This was probably an unfair evaluation of his performance and undoubtedly, in part, resulted from the fact that Ewell’s best military efforts came when he was not under Lee’s direct observation.

Along with the rest of Jackson’s command, Ewell and his division were transferred to Richmond in June 1862, where they fought off the advance of Union general George B. McClellan in the Seven Days’ Battles (1862). Ewell distinguished himself again in a hard-fought engagement at Kettle Run during the Second Manassas Campaign (1862), but then early in the Second Battle of Manassas, on August 28, he was seriously wounded. His right leg was amputated and he spent months away from duty and under the care of his first cousin, Lizinka Campbell Brown, whom he later married. His injury did little to diminish his standing in the Army of Northern Virginia, though, and when the Second Corps was reorganized after Jackson’s death in May 1863, Lee placed Ewell in command.

Shortly thereafter Ewell marched his troops back to the Shenandoah Valley and won a smashing victory at the Second Battle of Winchester (1863). The Second Corps then led the army’s advance north across the Potomac River and finally into Pennsylvania. On July 1, the first day of the Battle of Gettysburg, Ewell brought his command onto the field at exactly the right time and place, playing a decisive role in the rout of the Army of the Potomac during the late afternoon. His decision not to attempt an attack that evening on Cemetery Hill, where Union troops had taken up defensive positions south of Gettysburg, however, would become one of the most controversial of the war. To lend some perspective to that decision, it is important to note that Lee’s orders to Ewell that evening were highly discretionary and the Union position on the hill was probably too strong for an assault to succeed anyway.

Ewell provided solid leadership to the Second Corps for the rest of 1863, but lost Lee’s confidence as a result of problems with his corps’s performance at the Battle of Spotsylvania (1864), during which Lee threatened to personally lead the Second Corps in a counterattack on May 12. Shortly thereafter, Ewell, whose health was faltering, was reassigned to command of the garrison defending Richmond. Ewell did well in this assignment, in particular containing a Union offensive that captured Fort Harrison in September 1864. Ewell’s command evacuated Richmond along with the rest of Lee’s command in April 1865, but his corps was effectively eliminated as a fighting force a few days later in the Battle of Sailor’s Creek, during the Appomattox Campaign, when Ewell was taken prisoner. After the war, he settled in Tennessee on his wife’s plantation and died of pneumonia in 1872.