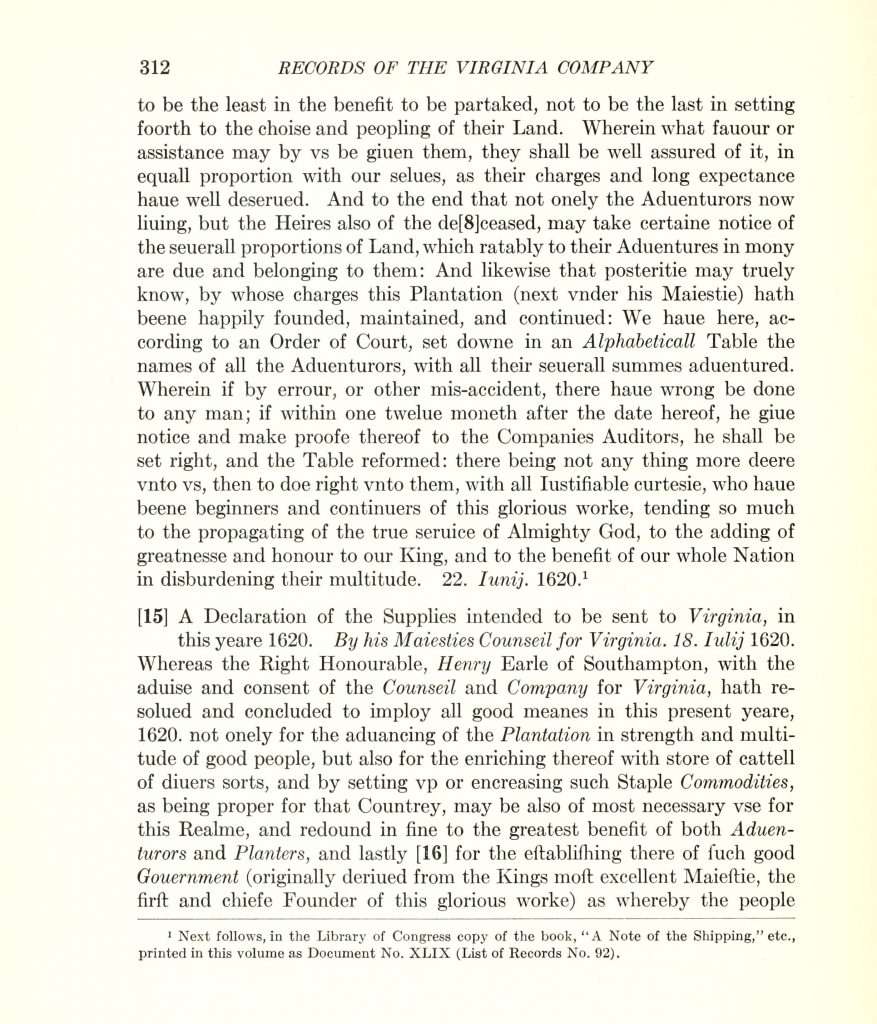 A Declaration of the Supplies intended to be sent to Virginia, in this yeare 1620. By his Majesties Counseil for Virginia. 18. Julij 1620.

Whereas the Right Honourable, Henry Earle of Southampton, with the advise and consent of the Counseil and Company for Virginia, hath resolved and concluded to imploy all good meanes in this present yeare, 1620. not onely for the advancing of the Plantation in strength and multitude of good people, but also for the enriching thereof with store of cattell of divers sorts, and by setting up or encreasing such Staple Commodities, as being proper for that Countrey, may be also of most necessary use for this Realme, and redound in fine to the greatest benefit of both Adventurors and Planters, and lastly for the establishing there of such good Government (originally derived from the Kings most excellent Majestie, the first and chiefe Founder of this glorious worke) as whereby the people 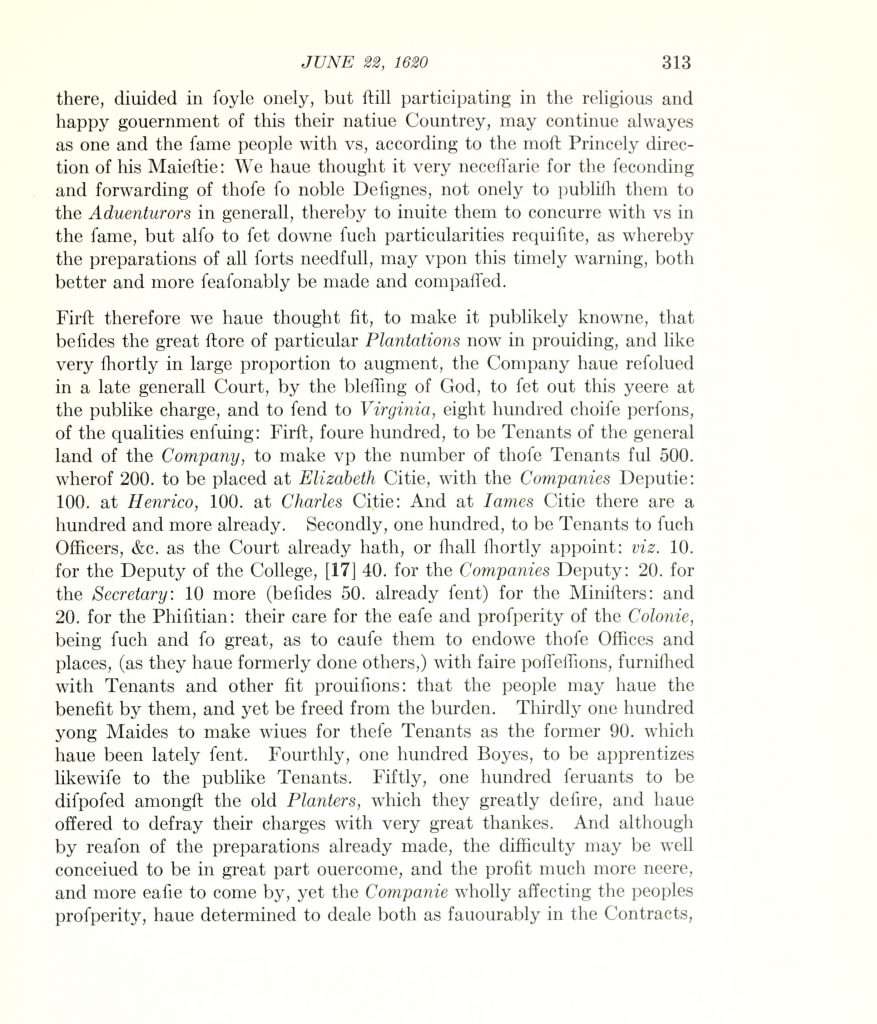 there, divided in soyle onely, but still participating in the religious and happy government of this their native Countrey, may continue alwayes as one and the same people with us, according to the most Princely direction of his Majestie: We have thought it very necessarie for the seconding and forwarding of those so noble Designes, not onely to publish them to the Adventurors in generall, thereby to invite them to concurre with us in the same, but also to set downe such particularities requisite, as whereby the preparations of all sorts needfull, may upon this timely warning, both better and more seasonably be made and compassed.

First therefore we have thought fit, to make it publikely knowne, that besides the great store of particular Plantations now in providing, and like very shortly in large proportion to augment, the Company have resolved in a late generall Court, by the blessing of God, to set out this yeere at the publike charge, and to send to Virginia eight hundred choise persons, of the qualities ensuing: First, foure hundred, to be Tenants of the general land of the Company, to make up the number of those Tenants ful 500. whereof 200. to be placed at Elizabeth Citie, with the Companies Deputie: 100. at Henrico, 100. at Charles Citie: And at James Citie there are a hundred and more already. Secondly, one hundred, to be Tenants to such Officers, &c. as the Court already hath, or shall shortly appoint: viz. 10. for the Deputy of the College, 40. for the Companies Deputy: 20. for the Secretary: 10 more (besides 50. already sent) for the Ministers: and 20. for the Phisitian: their care for the ease and prosperity of the Colonie, being such and so great, as to cause them to endowe those Offices and places, (as they have formerly done others,) with faire possessions, furnished with Tenants and other fit provisions: that the people may have the benefit by them, and yet be freed from the burden. Thirdly one hundred yong Maides to make wives for these Tenants as the former 90. which have been lately sent. Fourthly, one hundred Boyes, to be apprentizes likewise to the publike Tenants. Fiftly, one hundred servants to be disposed amongst the old Planters, which they greatly desire, and have offered to defray their charges with very great thankes. And although by reason of the preparations already made, the difficulty may be well conceived to be in great part overcome, and the profit much more neere, and more easie to come by, yet the Companie wholly affecting the peoples prosperity, have determined to deale both as favourably in the Contracts, 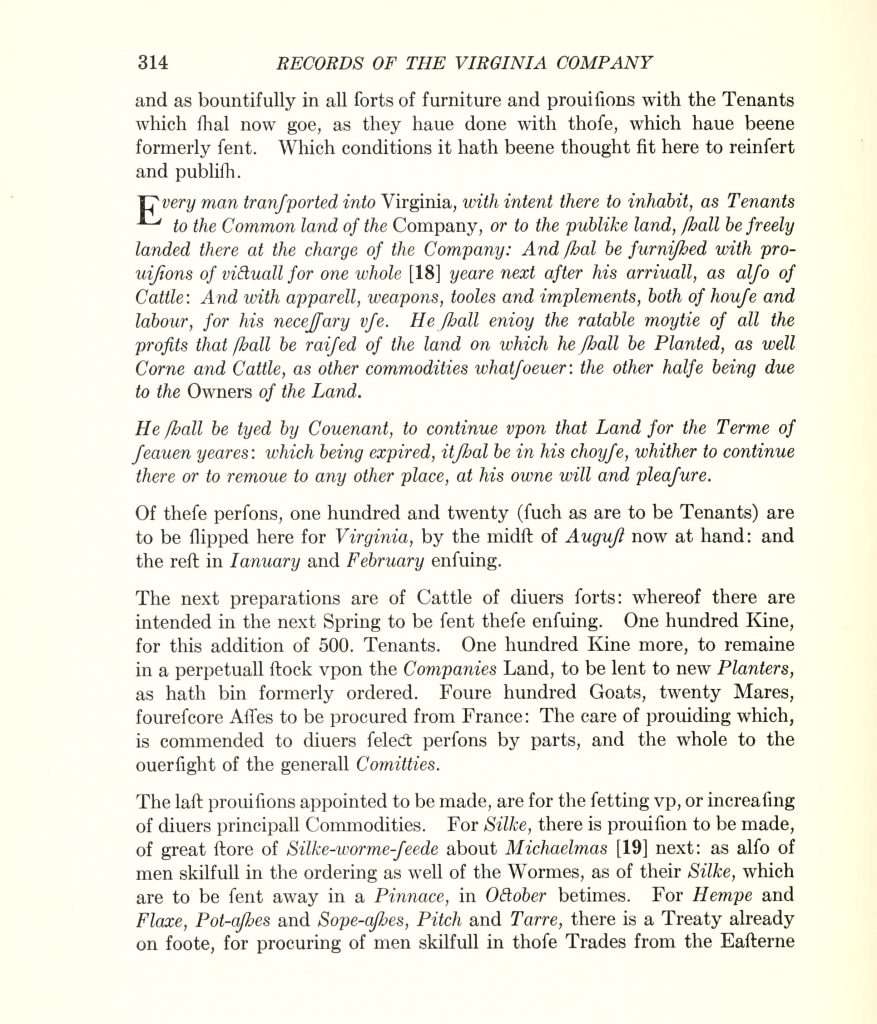 and as bountifully in all sorts of furniture and provisions with the Tenants which shal now goe, as they have done with those, which have beene formerly sent. Which conditions it hath beene thought fit here to reinsert and publish.

Every man transported into Virginia, with intent there to inhabit, as Tenants to the Common land of the Company , or to the publike land, shall be freely landed there at the charge of the Company: And shal be furnished with provisions of victuall for one whole yeare next after his arrivall, as also of Cattle: And with apparell, weapons, tooles and implements, both of house and labour, for his necessary use. He shall enjoy the ratable moytie of all the profits that shall be raised of the land on which he shall be Planted, as well Corne and Cattle, as other commodities whatsoever: the other halfe being due to the Owners of the Land.

He shall be tyed by Convenant, to continue upon that Land for the Terme of seaven yeares: which being expired, it shal be in his choyse, whither to continue there or to remove to any other place, at his owne will and pleasure.

Of these persons, one hundred and twenty (such as are to be Tenants) are to be slipped here for Virginia, by the midst of August now at hand: and the rest in January and February ensuing.

“An Acte towching dyvers Orders for Artificers Laborers Servantes of Husbandrye and Apprentises” (1563) Laws Concerning Indentured Servants (1619) Law Regulating Indentured Servants (1642–1643) Law Regulating Marriage of Indentured Servants (1642–1643) Law Prohibiting Indentured Servants from Hiring Themselves Out (1642–1643) Irish Servants (1654) “Against Runnaway Servants” (1657–1658) “Concerning Hireing of Servants” (1657–1658) “Concerning secret Marriages” (1657–1658) “How long Servants without Indentures shall Serve” (1657–1658) “An Act for repealing an Act for Irish Servants” (1659) “Women servants gott with child by their masters after their time expired to be sold by the Churchwardens for two yeares for the good of the parish” (1662) “Man Servants getting any bastard child to make satisfaction to the parish after their service ended” (1662) “Women servants whose common imployment is working in the ground to be accompted tythable” (1662) “An act for the more effectuall suppressing the severall sins and offences of swaring, cursing, profaineing Gods holy name, Sabbath abuseing, drunkenness, ffornication, and adultery” (1691) “An act for punishment of ffornication and seaverall other sins and offences” (1696)