Thomas Jefferson Edwards was born on October 15, 1922, in Henrico County and was the son of Thomas Jefferson Edwards (1881–1958) and Buena Vista Williams Edwards. Until he was almost six years old he lived in Hanover County, where his father served as principal of the Virginia Manual Labor School for Colored Boys (later the Hanover Juvenile Correctional Center). In 1928 the family moved to Henrico County, where Edwards attended the Virginia Randolph Training School. For approximately a year beginning in October 1939 he sang and played piano on his own fifteen-minute radio show that aired twice weekly on WRNL. By 1943 Edwards had moved to New York City. Lodging at the Harlem Young Men’s Christian Association, he peddled his songs in the Tin Pan Alley district and on Broadway. By April of that year Edwards had signed with the General Amusement Corporation and soon was performing in nightclubs and lounges in the Northeast and Midwest. Neither of two tracks he recorded with the Sammy Price Orchestra in 1944 was issued. 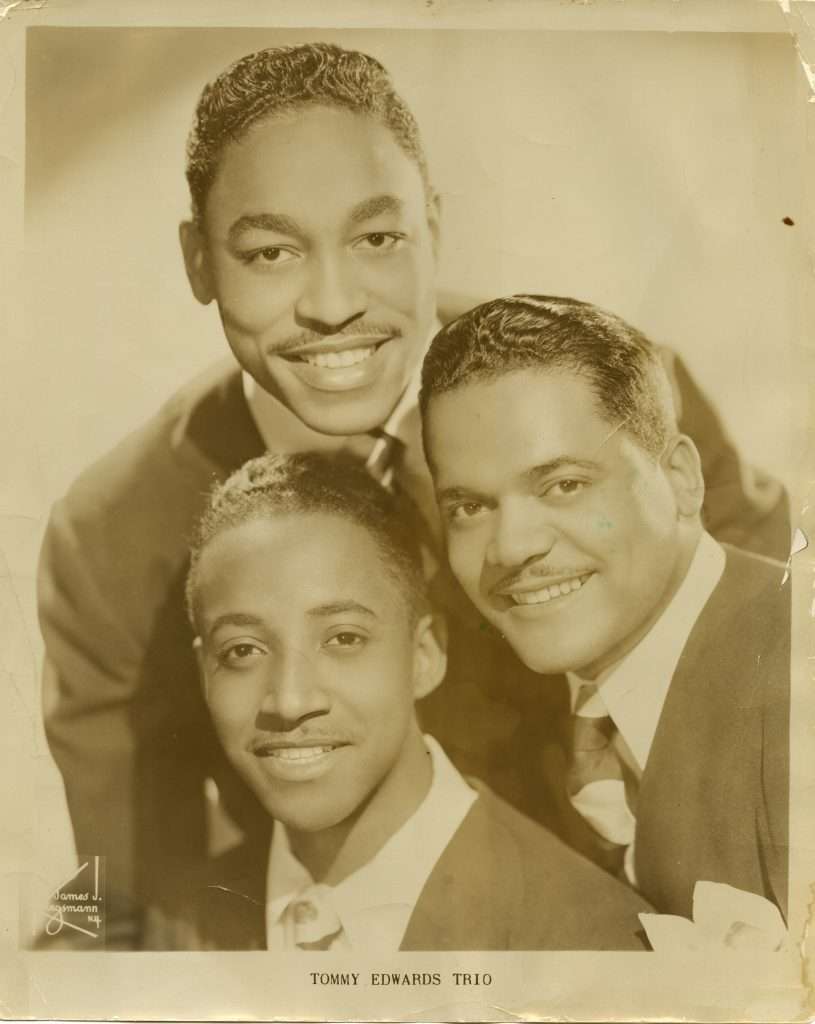 In 1946 the Deep River Boys and Bill Samuels and the Cats “N” Jammer Three covered Edwards’s amusingly risqué “That Chick’s Too Young to Fry,” and Louis Jordan’s version hit number three on the race (later the rhythm and blues) chart. Samuels’s quartet released Edwards’s raunchy “My Bicycle Tillie” that autumn. By August 1947 Edwards had formed the Tommy Edwards Trio and released one of several recordings for Top Records, some featuring his compositions. By early in 1949 he had signed a four-year deal with National Records, and his trio released a debut recording featuring his novelty tune “Up in the Alley.” The ensuing recordings, featuring Edwards’s voice and piano on blues-flavored and upbeat tunes, did not chart, and he and the label parted ways.

Resuming his solo career, Edwards signed with Signature Records in September 1950. Although that venture proved unproductive, his songwriting paid off again when Tony Bennett released the swinging “One Lie Leads to Another.” Edwards appeared on the television talent-search programs The Show Goes On and Songs for Sale, where his comic “Paging Mister Jackson” won first prize. The country music star Red Foley soon recorded the tune. Edwards then pitched “All Over Again” to MGM Records. Impressed by his voice, executives offered him a contract, and on November 30 he went into the recording studio. 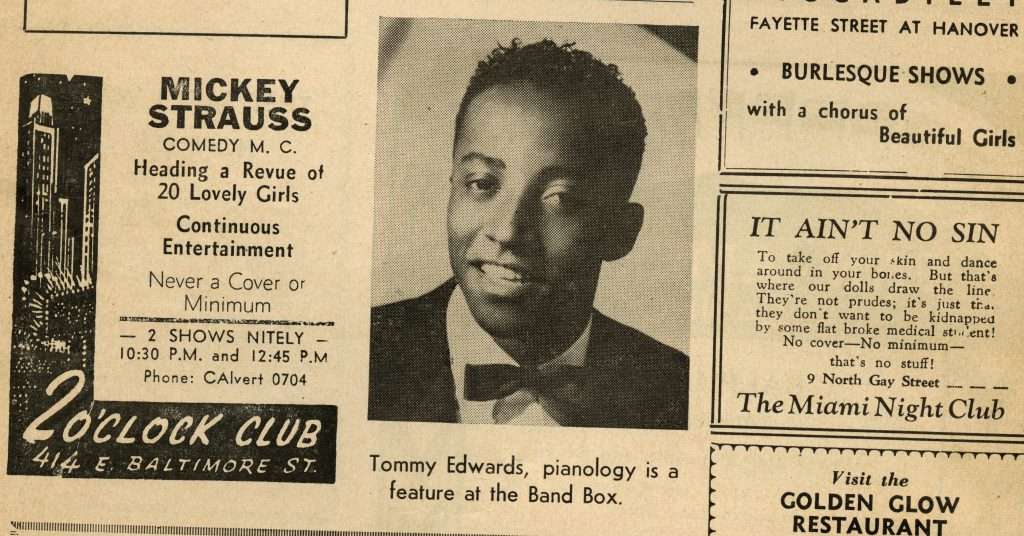 When “Once There Lived a Fool” debuted early in 1951, reviewers for Billboard and several other music-industry publications noted a similarity to Nat King Cole, and some considered Edwards as imitative. In July “The Morningside of the Mountain” hit number twenty-four on Billboard‘s retail chart. By then Edwards had also recorded “It’s All in the Game.” Carl Sigman had written lyrics for “Melody in A Major,” music composed decades earlier by Charles Gates Dawes, later vice president of the United States. Louis Armstrong, Carmen Cavallaro, Sammy Kaye, and Dinah Shore had all recorded the ballad, but it was Edwards’s version that charted at number eighteen that autumn. The flip side, “All Over Again,” made the R&B chart. Trumpeted as “A New Singing Star” in a September 1951 advertisement in Variety, Edwards appeared on Perry Como’s television show and with the Woody Herman Orchestra in Montreal and Toronto. His sudden fame led a Chicago Defender columnist to proclaim in March 1952 that Edwards was the “most talked about vocalist along juke box row.”

During 1952 Edwards appeared on television, performed with the Les Paul and Mary Ford stage show, and traveled with the Woody Herman Orchestra, the Mills Brothers, and Dinah Washington in a Caravan of Stars tour that stopped in Norfolk and Richmond. “Please Mr. Sun” and “You Win Again” proved popular, but these and other of Edwards’s recordings lost out to more-successful versions by Perry Como, Doris Day, Johnny Ray, Jo Stafford, and Hank Williams. Although picked as one of the most promising newer male vocalists in February 1953, his career had stalled by May 1954. He cut but two tracks that month and, in a sign of things to come, did not return to the studio until the following January.

Edwards made no recordings for MGM between September 1955 and June 1958. Often broke, he relied on loans from friends in the music business. Edwards attributed his decline to the onset of rock and roll during the mid-1950s, but his career had faltered earlier. MGM had marketed him as a black crooner similar to the label’s “Sepia Sinatra,” Billy Eckstine, but the lushly orchestrated songs selected for him were of uneven quality. For his part, the soft-singing Edwards rarely extended a note or fashioned a crescendo, and the sweetly sung ballads became predictable. His popularity might have been prolonged, however, had his flair for lively, up-tempo compositions not been disregarded.

Edwards reportedly had only pocket change and MGM was preparing to drop him when in 1958 the label opted to reprise “It’s All in the Game” as a beat-ballad. The arrangement melded perfectly with his romantic tenor. Captivating teenagers and young adults alike, the recording spent six weeks at number one on Billboard, topped the charts in Australia, Canada, and the United Kingdom, and eventually sold 3.5 million copies. Edwards received his gold record on Your Hit Parade and performed on the Ed Sullivan Show. Dick Clark, host of American Bandstand, hailed his return as the year’s biggest comeback. During the next two years Edwards charted thirteen other songs; three made the Top 20 and two others the Top 30. He toured extensively, starred at least twice on Bandstand, and was invited on several occasions to appear on Clark’s Saturday Night Beechnut Show.

Despite this success, in October 1959 a reviewer from the Arizona Republic warned that “Edwards should try a jump tune sometime—and pretty soon, too … [H]e has a new MGM release, but it’s another set of wistful ballads.” Edwards last appeared on the charts a year later. In 1962 he won a victory when the New York State Supreme Court ordered MGM to disclose royalty figures. In 1965 Edwards joined Musicor Records, but a 1966 release flopped. He had once confided that rock and roll was not his style, and he became increasingly out of step with music trends. Settling at the family home, he toured U.S. military bases in West Germany and appeared in Virginia Beach and Atlanta before returning to Richmond to star in a Red Barn Theater revue. Early in 1969 he appeared in Winnipeg, where he had once played to enthusiastic audiences and received a key to the city.

In reduced circumstances and drinking heavily, Edwards died of cirrhosis of the liver on October 23, 1969, in his Henrico County home. No obituary appeared in the trade press, and his grave in the Quioccasin Baptist Church Cemetery remained unmarked until 2008.

In 2004 Universal Music Group, which then owned the MGM catalog, agreed to pay the Edwards estate about $229,000 as part of a royalties settlement by major music corporations. Regarded as a classic of the early rock and roll era, his signature song has been featured in numerous compilations, including Barry Manilow’s chart-topping 2006 album, The Greatest Songs of the Fifties. In 2012 London-based Jasmine Records and Cherry Red Records each released double-compact disc sets featuring more than fifty recordings from Edwards’s MGM catalog. In 2008, the fiftieth anniversary of his million-seller, Richmond’s mayor proclaimed October 15 as Tommy Edwards Day. The following year the Virginia Department of Historic Resources erected a historical marker in Henrico County near where Edwards had grown up.

RELATED CONTENT
Categories:
Type:
MAP
TIMELINE
October 15, 1922
Tommy Edwards is born in Henrico County, and is the son of Thomas Jefferson Edwards and Buena Vista Williams Edwards.
1928
Tommy Edwards moves from Hanover County to Henrico County with his family.
October 1939
Tommy Edwards begins to sing and play piano on his own fifteen-minute radio show that airs twice weekly on WRNL in Henrico County.
1943
By this year Tommy Edwards has moved to New York City from Henrico County.
April 1943
By this date Tommy Edwards has signed with the General Amusement Corporation and soon will be performing in nightclubs and lounges in the Northeast and Midwest.
1944
Neither of the two tracks Tommy Edwards records with the Sammy Price Orchestra is issued.
1946
The Deep River Boys and Bill Samuels and the Cats "N" Jammer Three cover Tommy Edwards's amusingly risqué "That Chick's Too Young to Fry."
Autumn 1946
Bill Samuel's quartet releases Tommy Edwards's raunchy "My Bicycle Tillie."
August 1947
By this date, Tommy Edwards has formed the Tommy Edwards Trio and has released one of several recordings for Top Records, some featuring his compositions.
Early 1949
By this date, Tommy Edwards signs a four-year deal with National Records, and his trio releases a debut recording featuring Edwards's novelty tune "Up in the Alley."
September 1950
Tommy Edwards resumes his solo career and signs with Signature Records.
November 30, 1950
Tommy Edwards begins recording with MGM Records.
Early 1951
Reviewers for Billboard and several other music-industry publications note a similarity between Tommy Edwards and Nat King Cole, and some consider Edwards imitative.
July 1951
Tommy Edwards's "The Morningside of the Mountain" hits number twenty-four on Billboard's retail chart.
July 1951
By this date Tommy Edwards has recorded "It's All in the Game."
September 1951
In an advertisement in Variety, Tommy Edwards is trumpeted as "A New Singing Star."
1952
Tommy Edwards appears on television, performs with the Les Paul and Mary Ford stage show, and travels with the Woody Herman Orchestra, the Mills Brothers, and Dinah Washington in a Caravan of Stars tour that stops in Norfolk and Richmond.
February 1952
Tommy Edwards is picked as one of the most promising newer male vocalists.
March 1952
A Chicago Defender columnist proclaims Tommy Edwards the "most talked about vocalist along juke box row."
May 1954
Tommy Edwards's music career has stalled. He cuts two tracks this month and, in a sign of things to come, will not return to the studio until January.
1958
MGM opts to reprise Tommy Edwards's "It's All in the Game" as a beat-ballad, which will spend six weeks at number one on Billboard, top the charts in Australia, Canada, and the United Kingdom, and eventually sell 3.5 million copies, which revives Edward's career.
1958-1960
Tommy Edwards charts fourteen songs; three make the Top 20 and two others the Top 30. He tours extensively, stars at least twice on American Bandstand, and is invited on several occasions to appear on Dick Clark's Saturday Night Beechnut Show.
October 1959
Despite Tommy Edwards's success, a review from the Arizona Republic warns that "Edwards should try a jump tune sometime—and pretty soon, too ... [H]e has a new MGM release, but it's another set of wistful ballads."
1960
Tommy Edwards appears for the last time on the Billboard charts.
1962
Tommy Edwards wins a victory when the New York State Supreme Court orders MGM to disclose royalty figures.
1965
Tommy Edwards joins Musicor Records, but a 1966 release will flop.
Early 1969
Tommy Edwards performs in Winnipeg, where he played to enthusiastic audiences and received a key to the city years before.
October 23, 1969
Tommy Edwards dies in his Henrico County home of cirrhosis of the liver. No obituary appears in the trade press, and his grave in the Quioccasin Baptist Church Cemetery will remain unmarked until 2008.
2004
Universal Music Group, which owns the MGM catalog, agrees to pay the estate of Tommy Edwards about $229,000 as part of a royalties settlement by major music corporations.
2006
Tommy Edwards's song, "It's All in the Game," is featured in Barry Manilow's chart-topping album, The Greatest Songs of the Fifties.
2008
On the fiftieth anniversary of Tommy Edwards's million-seller, "It's All in the Game," Richmond's mayor proclaims October 15 as Tommy Edwards day.
2009
The Virginia Department of Historic Resources erects a historical marker in Henrico County near where Tommy Edwards grew up.
2012
London-based Jasmine Records and Cherry Red Records each release double-compact disc sets featuring more than fifty recordings from Tommy Edwards's MGM catalog.
FURTHER READING
CITE THIS ENTRY