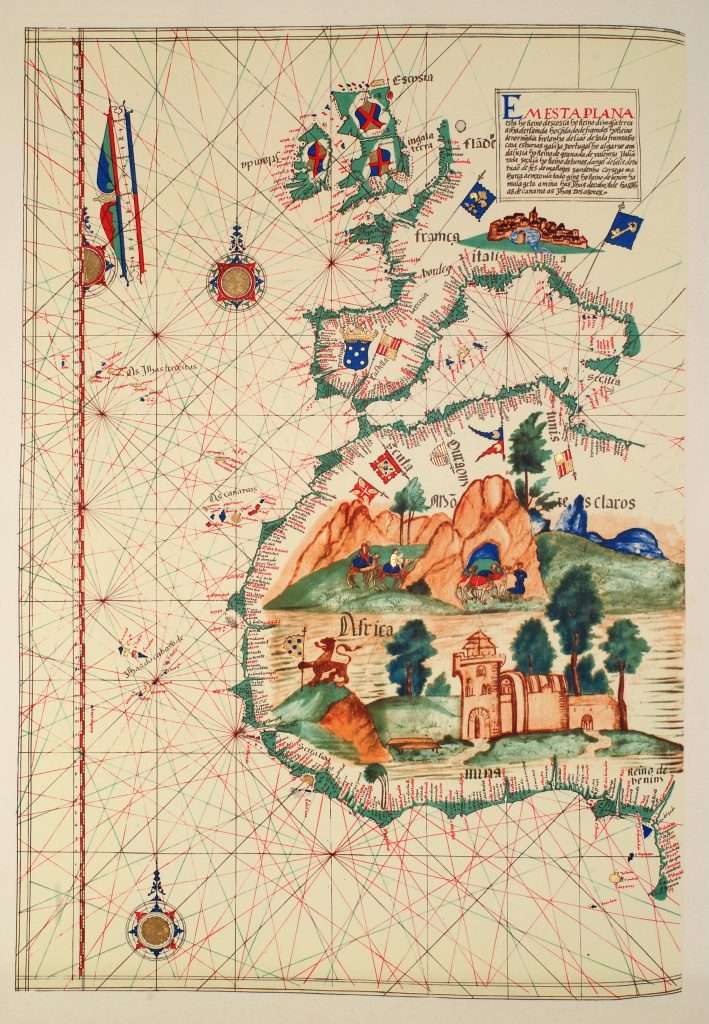 Driggus’s name appears in the records of Northampton County between 1645 and 1685. He might have been the Emanuel mentioned in 1640 as a runaway. The date and place of his birth are not known, nor are the date and circumstances of his arrival in Virginia. His name, possibly a corruption of a Portuguese surname occasionally spelled Rodriggus or Roddriggues, suggests that he was either from Africa (perhaps Angola) or from one of the Caribbean islands served by Portuguese slave traders. His first name was also sometimes spelled Manuell. Driggus’s Iberian name and the aptitude that he displayed maneuvering within the Virginia legal system suggest that he grew up in the ebb and flow of people, goods, and cultures around the Atlantic littoral and that he learned to navigate to his own advantage.

Driggus married twice. Frances, his first wife, was of African birth or ancestry. Driggus had at least three sons and three daughters, and he took responsibility for two other girls who were probably not his daughters. In 1645 he arranged for his two foster daughters to be indentured to his master, Francis Pott. Elizabeth, who was seven or eight years old, was to serve until the age of twenty-one, and Jane, who was about one year old, until the age of thirty. By March 19, 1648, Pott had sold Driggus and his wife to Mary Menifee, whose agent on that date sold them and another man identified as a Negro “with all their Increase forever” to Pott’s brother-in-law, the Northampton County planter Stephen Charlton. Frances Driggus died on an unknown date, and by October 1, 1661, Driggus had married a woman of English birth or ancestry whom he described as “my well beloved wife Elizabeth Driggas.” 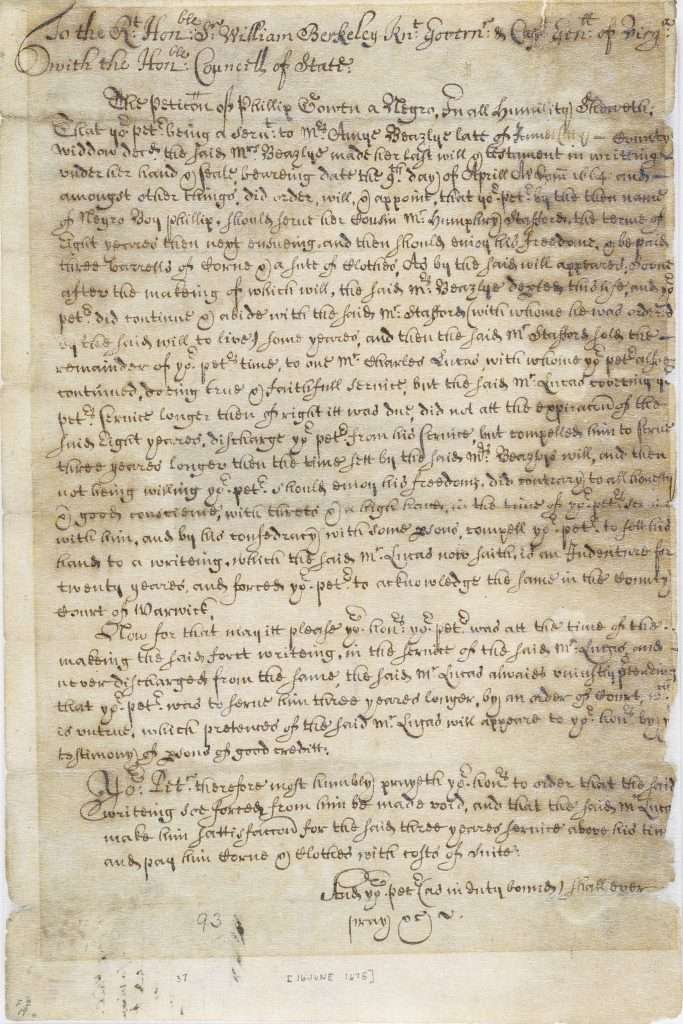 1675 Petition by an Indentured Servant

In the mid-seventeenth century, Virginia had none of the carefully crafted legal apparatus to keep blacks enslaved. The fluid differences between an indentured servant and a slave allowed Driggus opportunities to advance himself. By 1652 he had arranged for the freedom of his foster daughter Jane, but what happened to Elizabeth is unclear. Driggus’s own children were not so fortunate; at least three of those who lived to adulthood remained enslaved. Pott sold Ann and Edward separately in 1657. That event might have motivated Driggus to seek his own freedom.

Driggus became adept at negotiating deals with English planters and in using the courts to protect his own interests and those of his family. In the absence of strong laws limiting the ability of slaves to control some forms of property, Driggus was able to mimic English modes of patron-client relationships in order to acquire property and the advantages that came with it. The possession of livestock was instrumental in his escape from slavery and for the security of his natural and adopted children. He gained material advantages for himself and his family by raising horses, cows, hogs, chickens, and sheep. Almost one-third of all documents relating to Driggus record his ownership of livestock. He was careful to ensure that his English masters legally recognized his ownership of livestock, which he then traded and sold to white and black farmers. In 1673 Driggus gave to his daughters Frances and Ann a bay mare that the husband of his daughter Jane was to hold for them. Perhaps he hoped that his daughters could benefit from owning livestock as he had. He also gave livestock to his free children Mary and Devorick that same year.

Driggus gained his own freedom sometime before October 1, 1661, when he identified himself in a court record as a planter. During the 1660s and 1670s, he integrated himself into the Eastern Shore’s agricultural economy as a horse breeder and tobacco planter. In April 1662 Driggus leased a 145-acre tract of land for 7,500 pounds of tobacco and a filly. Three years later he renegotiated the deal. Leasing was a standard method for landless free people, both black and white, to acquire the capital to buy their own land, and no doubt Driggus intended to earn a profit and purchase his own farm. Driggus also looked after other enslaved blacks; in 1665 he and another free black man secured the freedom of Hanna Carter. In 1667 he cared for an ill English seaman whose will left Driggus all of his meager possessions and eleven months’ unpaid wages. 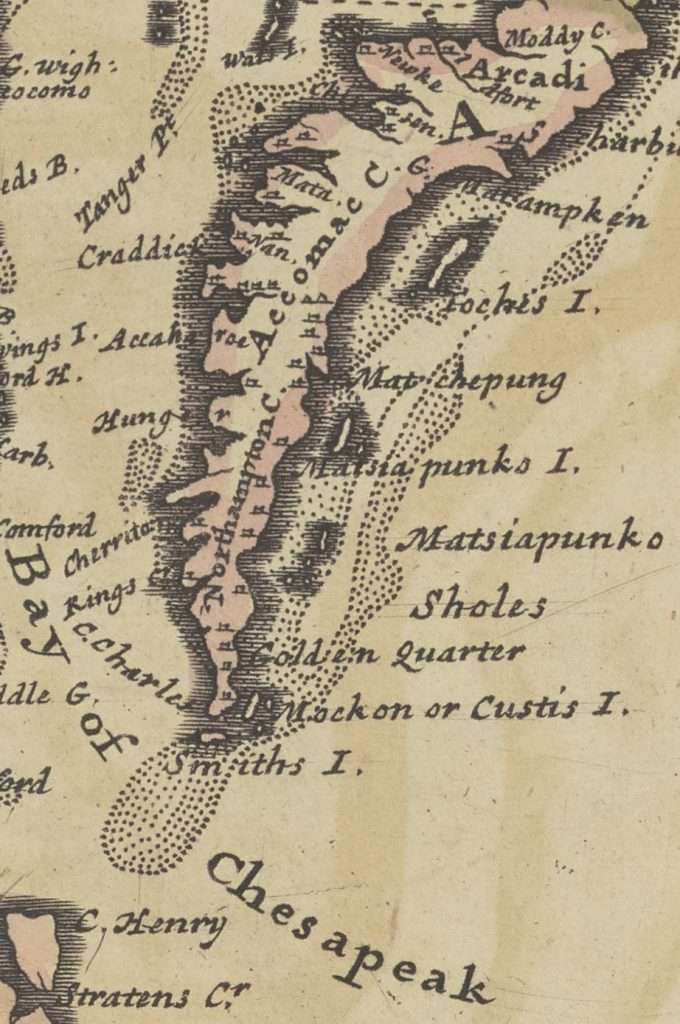 The social and racial fluidity that allowed Driggus room to maneuver, lease land, breed horses, and raise tobacco had begun breaking down by the 1670s. The decline of the Eastern Shore’s black community in the face of increasingly onerous legal restrictions on free and enslaved blacks is evident even in the thinly documented experience of his life. Early in 1672 Driggus was fined for unlawfully entertaining two servants, probably his own daughters then belonging to John Custis, later a member of the governor’s Council. That Driggus was prosecuted for spending time with his family indicates the precariousness of freedom during the 1670s. Driggus also struggled financially. In 1672 he lost a judgment in court in the amount of 459 pounds of tobacco, part of which he was unable to pay as late as 1675. Driggus apparently hired himself out as a servant to cover his expenses and his debts, and in 1674 his name appeared on the list of tithable laborers on the Custis property.

The last mention of Emanuel Driggus in the Northampton County public records is reference to a debt of several hundred pounds of tobacco that he owed in 1685 to a recently deceased planter. The date and place of Driggus’s death are not recorded.