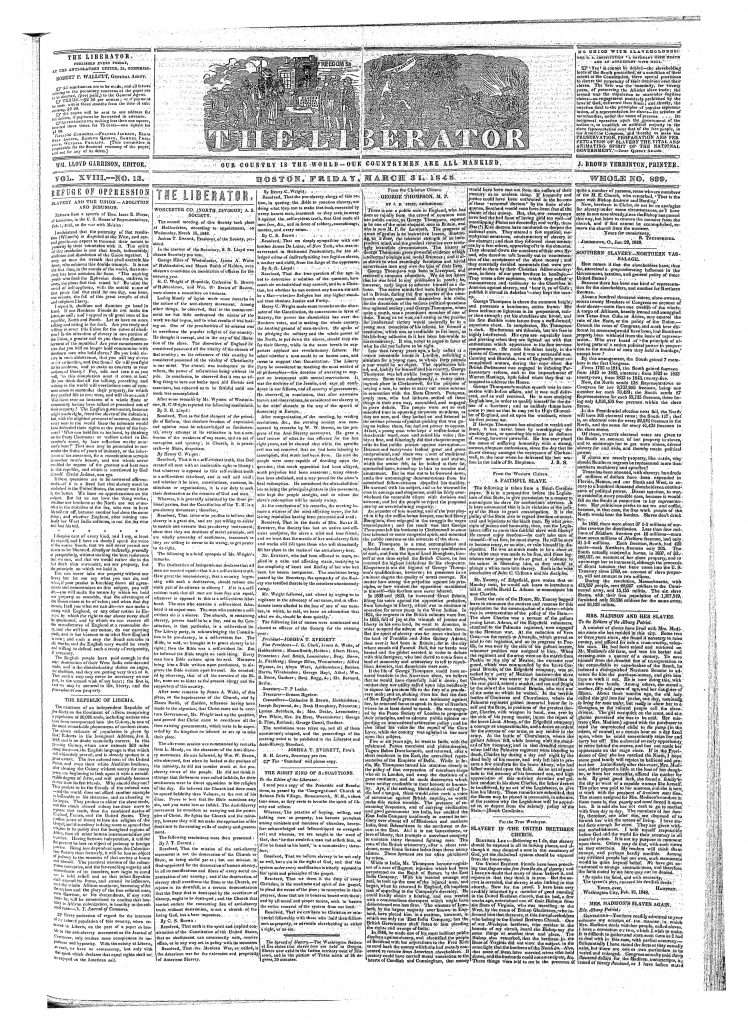 MRS. MADISON AND HER SLAVES.

To the Editors of the Albany Patriot.

A number of slaves have lived with Mrs. Madison since she has resided in this city. Some two or three years since, she found it necessary to raise money, and offered for sale a trust-worthy, valuable man. He had been raised and nurtured on Mr. Madison’s old farm, and was his barber and dressing-man a quarter of a century. To save himself from the dreaded fate of transportation to the cotton-fields or cane-brakes of the South, he induced a distinguished Northern Senator to advance for him the purchase-money, and give him time to work it out. He is now doing this, with his own free hands. Among others, she owned another, fifty odd years of age, and her daughter of fifteen. About three months ago, the old lady called this girl into her parlor, one day, nominally to bring her some water, but really to show her to a Georgian, as the colored people call the slave-drivers. The girl was quick on the scent, and at a glance perceived she was to be sold. Her mistress (Mrs. Madison) agreed with the purchaser to send the unprotected child to the pump (in the street, of course) at a certain hour on a day fixed upon, when he could conveniently seize her and carry her off! She embraced an early opportunity to retire behind the scenes, and has not made her appearance on the stage since. If in the Providence of God she has reached the North, I hope some good family will rejoice to befriend and protect her. Immediately after this event, Mrs. Madison, either piqued a little at the loss of her daughter, or from her necessities, offered the mother for sale. By great good luck, she found a family in the city in want of a capable woman like herself. The price was paid to her mistress, and she is now at work with the prospect of freedom some time. The reason assigned for Mrs. Madison’s conduct in these cases is, that poverty and want forced it upon her. It is said that she has not cash to go to market with from day to day. The members of her family, therefore, one after one, are disposed of to furnish her with the means of living. I have stated facts enough for once. They are given without embellishment. I hold myself responsible before God and the world for their accuracy in all material points. It is not my purpose to comment upon them. Others may do that, with such views as they entertain. My readers will think them strange, and perhaps hardly credible. Among any civilized people but our own, such statements would be quite beyond belief. We have got accustomed to strange contradictions, and therefore the facts stated by me here may not be denied.

‘So spake the fiend, and with necessity,

Gentlemen—You have readily admitted to your columns my account of the manner in which Mrs. Madison deals with her people, called slaves. I have a correction or two, which I wish to make. It is difficult to gather and state such facts as I had to deal with in this case, with perfect accuracy.—Substantially I have stated the facts as they actually exist, but there are one or two particulars to be varied and enlarged. Congress actually paid thirty thousand dollars for the Madison manuscripts, instead of twenty thousand, as I have before stated 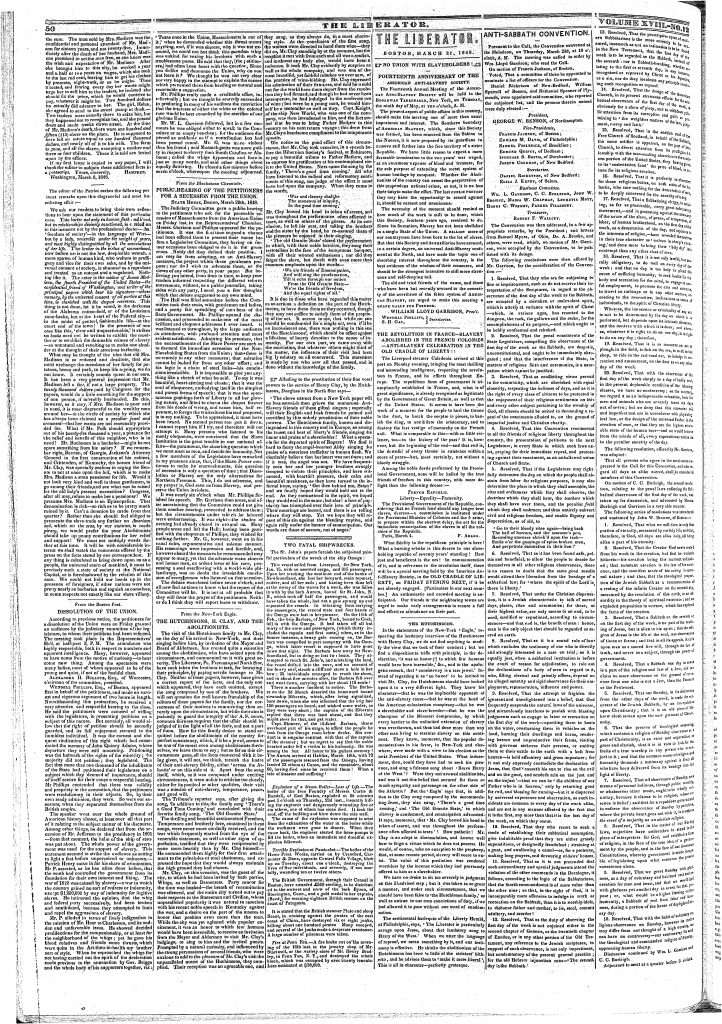 the sum. The man sold by Mrs. Madison was the confidential and personal attendant of Mr. Madison for sixteen years, and not twenty-five. Immediately after the death of her husband, Mrs. Madison promised to set the man free, as she knew was the wish and expectation of Mr. Madison. After she brought him to this city, he worked a year and a half or two years on wages, which she took to the last red cent, leaving him to get his clothes by presents, night-work, or as he might. Thus situated, and fearing every day her wants might urge her to sell him to the traders, he insisted she should fix the price, which he would contrive to pay, whatever it might be. Two hundred dollars he actually did advance her. The girl, Helen, she agreed to send to the street pump at dusk.—Two traders were actually there to seize her, but they happened not to recognize her, and she passed them and made tracks down street. At the time of Mr. Madison’s death, there were one hundred and fifteen (115) slaves on the place. He is supposed to have left an estate equal to one hundred thousand dollars, and nearly all of it to his wife. The farm is gone, and all the slaves, excepting a mother and three or four children. These it is said are levied upon by the officer.

If my first letter is copied in any paper, I will thank the editor to subjoin these additional facts in a postscript.

The editor of the Patriot makes the following pertinent remarks upon this disgraceful and most humiliating affair:—

We ask our readers to bring their own reflections to bear upon the statement of this particular case. This barter not only in human flesh and blood, but in relationships divinely sanctioned, is carried on in this instance not by the professional dealer—[?] “feculum of society’—in the language of Wirt—but by a lady, venerable under the weight of years, and most highly distinguished by all the associations of her life. The broker in the virtue of womanhood, now before us, is not the low, despicable wretch, a mere spawn of human kind, who welters in profligacy and vice for their own sake, and by the universal consent of society, is shunned as a reprobate and treated as an outcast and a vagabond. Nothing like it. The actor is the widow of James Madison, the fourth President of the United States—the confidential friend of Washington, and writer of the principal papers which bear his signature—whose memory, by the universal consent of all parties at this time, is cherished with the deepest reverence. This thing is not done, let it be noted, in the darkness of the Alabama cotton-field, or of the Louisiana cane-brake, but at the heart of the Federal city—in the midst of genteel, fashionable life—at the court end of the town! In the presence of one case like this, ‘clear and unquestionable,’ it strikes us books need not be written to exhibit the cruelties or to establish the damnable crimes of slavery —so unnatural and revolting as to make one shudder at the thought of their atrocious barbarity.

What may be thought of the idea that old Mrs. Madison is so reduced and destitute, that she must exchange the members of her family for potatoes, beans and pork, to keep life a-going, we do not know. It certainly sounds queer in our ears. It has been a very general impression that Mr. Madison left a fair, if not a large property. The twenty thousand dollars paid by Congress for the papers, would do a little something for the support of one person, if tolerably husbanded. Be this, however, as it may, if Mrs. Madison is poor and in need, it is most disgraceful to the wealthy men around her—to the circle of society by which she has always been claimed as a peculiar jewel and ornament—that her wants are not reasonable provided for. What if Mr. Polk should appropriate out of his twenty-five thousand a year, a pittance for the relief and benefit of this neighbor, who is in need! Mr. Buchanan is a bachelor—might he not spare something from his salary? If we remember right, Berrien, of Georgia, Jackson’s Attorney General in the first construction of his cabinet, and Crittenden, of Kentucky, the bosom friend of Mr. Clay, was specially zealous in urging the Senate to act at once upon the bill, which is to make Mrs. Madison a state pensioner for life. Would it not look very kind and well in those gentlemen, to go among their friends, and see what can be raised for the old lady’s present necessities? Congress, after all may, refuse to make her a pensioner! We presume Mrs. Madison is an Episcopalian. That denomination is rich—so rich as to be pretty much ruined by it. Can’t a donation be made from that quarter? Rather than she should feel obliged to prosecute the slave-trade any further on American soil, which on the seas, by our statutes, is made piracy, we would prefer the poor Abolitionists should take up peuny contributions for her relief and support! We must not multiply words farther at this time. It will be with considerable interest we shall watch the comments offered by the press on the facts stated by our correspondent. If any thing is calculated to bring down upon us as a people, the universal scorn of mankind, it must be precisely such a state of society at the National Capital, as is foreshadowed by the relation of this case. We could not hold our heads up on the presence of foreigners, if other nations were not pretty nearly as barbarian and roguish as ourselves, in some respects not exactly like our slave villany.