Amos Andre Dodson was born into slavery on April 10, 1856, in Mecklenburg County. He was the son of Judith Hepburn Dodson, who died while he was very young, and James Dodson. He served as a house slave until the age of eight, when he was put to work with a cabinetmaker for four years. During that time he became free as a consequence of the Civil War. At age twelve Dodson began an apprenticeship in carpentry while studying at night. He also worked for a physician who acquainted him with history and English literature. Dodson taught school in Mecklenburg County from about 1872 until 1882 and later returned to that profession as financial circumstances dictated. 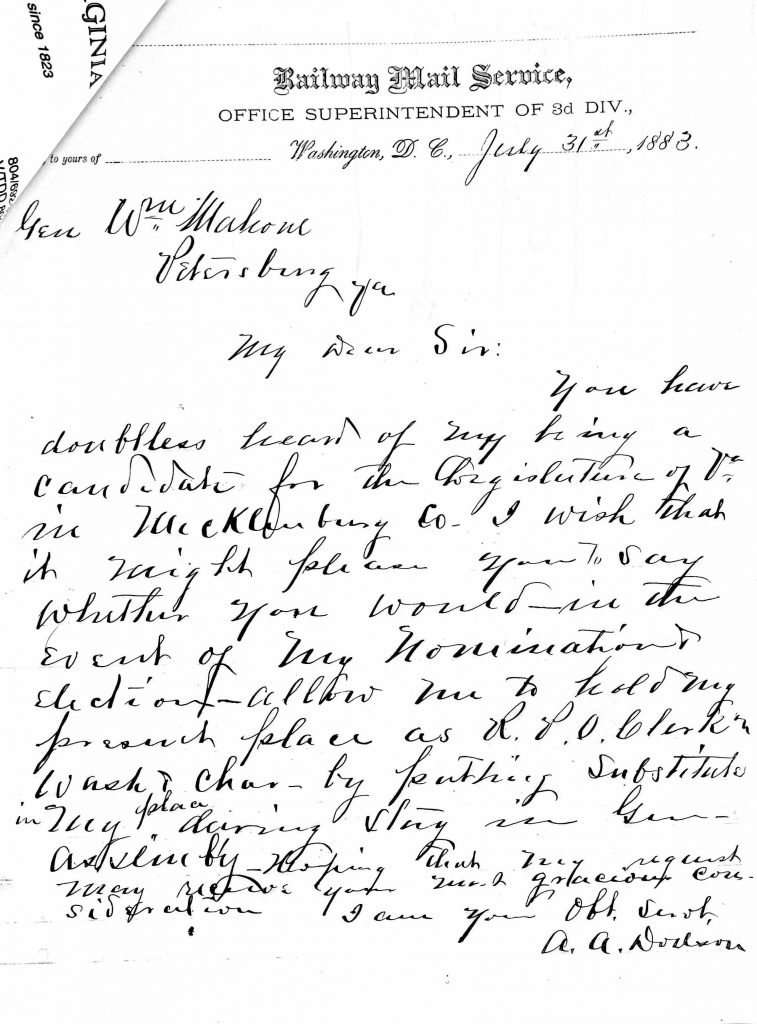 Letter from Amos A. Dodson to William Mahone

During the 1870s Dodson became involved in Republican Party politics. He served as a census enumerator in 1880. Within two years he had received an appointment as a railroad mail clerk with the assistance of William Mahone, leader of the Readjusters, a coalition of moderate white Conservatives and black and white Republicans that in 1879 had gained control of the General Assembly. In 1883 Mecklenburg County Readjusters nominated Dodson for a seat in the House of Delegates following a power struggle within the county coalition. On July 31, 1883, Dodson wrote to ask Mahone if he could continue his clerking position if he won the assembly seat. Ross Hamilton, an African American Republican who had held the House seat since 1869, was the focus of the contention but eventually relented and supported Dodson. A strong orator, Dodson won election by a vote of 1,933 to 1,584 for the Democratic candidate, despite the fact that Democrats reclaimed control of the state that year.

During the General Assembly that met in two sessions from December 1883 through March 1884 and again from August to December 1884, Dodson served on the Committees on Claims, on Immigration, and on Officers and Offices at the Capitol. Leading African Americans in Richmond asked him to present a petition to the assembly that protested the proposed racial segregation of school boards, the restriction of black men’s roles on those boards, and the reduction of public school funds for African American children.

Dodson read law under the tutelage of Alfred W. Harris, who represented Dinwiddie County in the House. With the national Republicans still in power, Dodson received an appointment as deputy collector with the Internal Revenue Service. In April 1884 he attended the convention at which Mahone and the Readjusters merged with the Republican Party, and Dodson was chosen to be one of the at-large Virginia delegates to the Republican National Convention, in Chicago. Later that year his name was floated as a potential candidate for the House of Representatives. He did not seek reelection to the assembly in 1885, but he continued to organize for the Republican Party in Charlotte and Mecklenburg counties that year with the hope of revitalizing a Republican-led political coalition under Mahone’s direction.

Dodson was among a group of African American legislators and businessmen who in January 1886 incorporated the Colored Agricultural and Industrial Association of Virginia to establish an annual fair to exhibit farm and industrial products. Later that year he moved to Knoxville, Tennessee, where he joined an undertaking business. Dodson gained public attention in 1887 when he successfully advocated the development of two Tennessee railway lines. He also opposed a prohibition amendment to the state constitution.

Dodson continued to speak and organize for the Republican Party and late in 1887 sought Mahone’s aid in convincing Knoxville Republicans that he was a “consistent member” of the party and not “weak kneed.” By September 1888 Dodson had become seriously ill with typhoid fever and later with consumption, probably tuberculosis. On November 29 of that year he married Sylvia J. Mason, a teacher. Dodson died at his Knoxville home on December 26, 1888, and was most likely buried in that city.