Dodge was born about 1820 in Utica, New York. Little is known of his early life, including the names of his parents. According to family tradition his middle name was Maine. By 1850 he had married Elizabeth Euphema Kingsley, of Herkimer County, New York, and had moved to Oswego, where he lived in the household of John Dodge, a younger relative, and farmed. In 1856 a creditor sued Sanford Dodge, John Dodge, and a third man in the Oswego County Supreme Court, but the Dodges had already fled the state to escape their debts. The court levied a judgment of more than $540 against both men in absentia. By 1860 Dodge, with his wife and their son, resided in Magnolia, Rock County, Wisconsin, where he farmed.

Little is known about his life during the Civil War, though family lore holds that he trained troops in upstate New York. At some point he began preaching the Gospel, and on February 6, 1864, in Rome, New York, the Methodist Episcopal Church granted him a license to preach. He moved to Virginia alone, likely late in 1866 or early in 1867. His family likely remained in New York and in 1870 was living in Herkimer County.

Dodge settled in Mecklenburg County, where he worked in a whiskey distillery. He became involved in Republican Party politics soon after he arrived in Virginia. In a referendum held on October 22, 1867, African American voters, eligible to participate for the first time, turned out in large numbers in Mecklenburg County to approve holding a convention to draft a new state constitution. Dodge and John Watson, a former slave, easily won election as the county’s convention delegates, though each received only one white vote. Appointed to the Committee on Prisons and the Prevention and Punishment of Crime, Dodge did not play a significant role in the convention, though he offered resolutions defending religious liberty, inquiring about the expediency of boosting the school fund with proceeds from the state tax on distilled liquors, and suggesting a prohibition of the sale of liquor on election days. 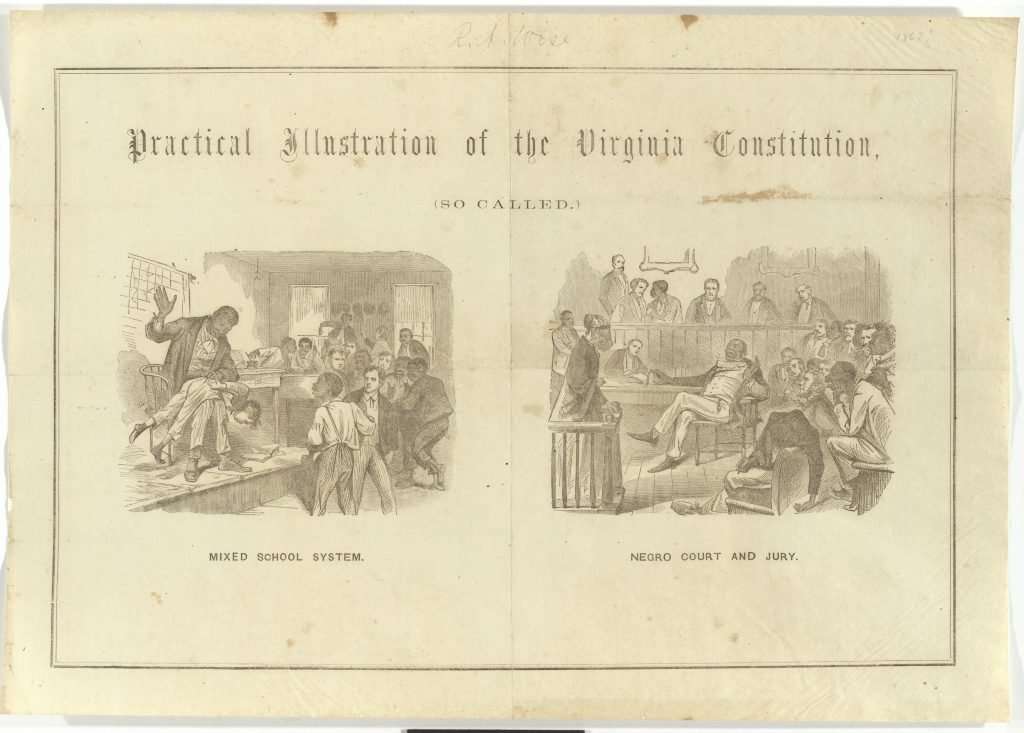 Practical Illustration of the Virginia Constitution, (So Called.)

Characterized as a radical by the commander of the Virginia military district, Dodge voted for reform on all key issues, including failed provisions that would have required the integration of Virginia’s new public schools and mandated the disfranchisement of Virginians who had voted to support secession. On April 17, 1868, Dodge joined the majority in approving the new constitution, which established a public school system, provided for universal manhood suffrage, and increased the number of elected local offices.

In 1868 Dodge traveled to Chicago as a member of the Virginia delegation to the Republican National Convention. In October of that year he took over a local freedpeople’s school in Mecklenburg’s county seat of Boydton, which was run under the auspices of the Pennsylvania branch of the American Freedman’s Union Commission, and operated it until at least the following February. He and Watson were elected by wide margins to represent Mecklenburg in the House of Delegates for the 1869–1871 assembly. Dodge served on the Committees on Propositions and Grievances and on Labor and Poor. In March 1870 a Richmond court qualified him to conduct marriage ceremonies. After an illness of several weeks, Dodge died of typhoid fever in Richmond on July 25, 1870. He may have been buried in that city’s Oakwood Cemetery.