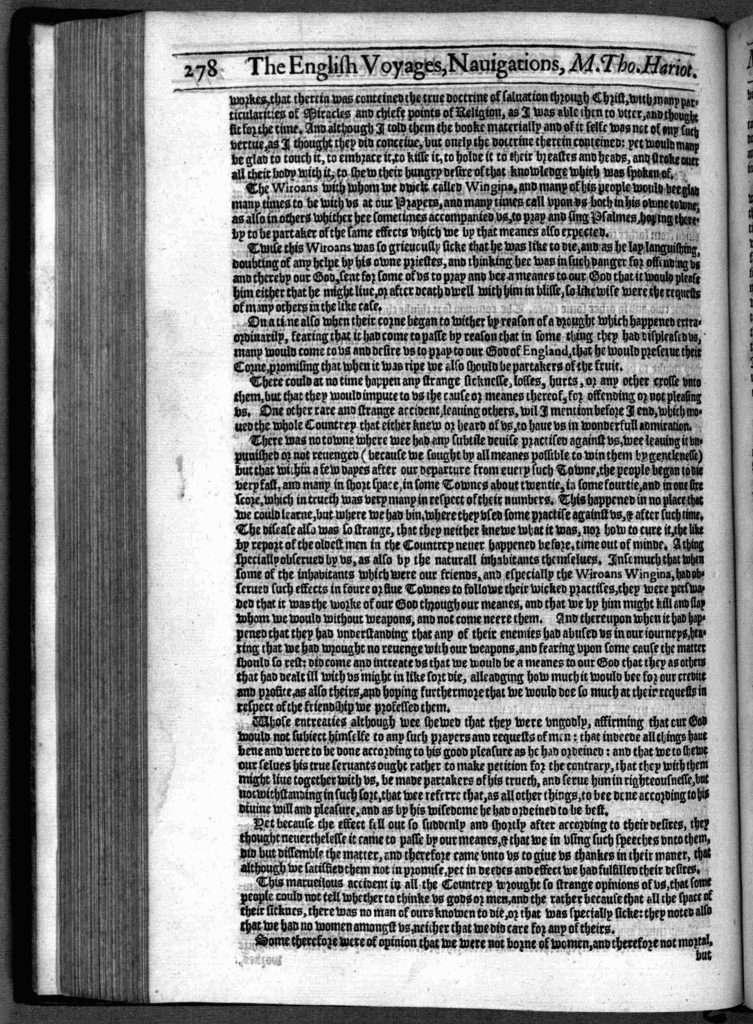 Diseases that Ravaged Indian Towns; an excerpt from A briefe and true report of the new found land of Virginia by Thomas Hariot (1588), Page 278

One other rare and strange accident, leaving others, wil I mention before I end, which moved the whole Countrey that either knew or heard of us, to have us in wonderfull admiration.

There was no towne where wee had any subtile devise practised against us, wee leaving it unpunished or not revenged (because we sought by all meanes possible to win them by gentlenesse) but that within a few dayes after our departure from every such Towne, the people began to die very fast, and many in short space, in some Townes about twentie, in some fourtie, and in one sixe score, which in trueth was very many in respect of their numbers. This happened in no place that wee coulde learne, but where we had bin, where they used some practise against us, & after such time. The disease also was so strange, that they neither knew what it was, nor how to cure it, the like by report of the oldest men in the Countrey never happened before, time out of minde. A thing specially observed by us, as also by the naturall inhabitants themselves. Insomuch that when some of the inhabitants which were our friends, and especially the Wiroans Wingina, had observed such effects in foure or five Townes to followe their wicked practises, they were perswaded that it was the worke of our God through our meanes, and that we by him might kill and slay whom we would without weapons, and not come neere them. [ … ]

This marveilous accident in all the Countrey wrought so strange opinions of us, that some people could not tell whether to thinke us gods or men, and the rather because that all the space of their sicknes, there was no man of ours knowen to die, or that was specially sicke: they noted also that we had no women amongst us, neither that we did care for any of theirs.

Some therefore were of opinion that we were not borne of women, and therefore not mortal, 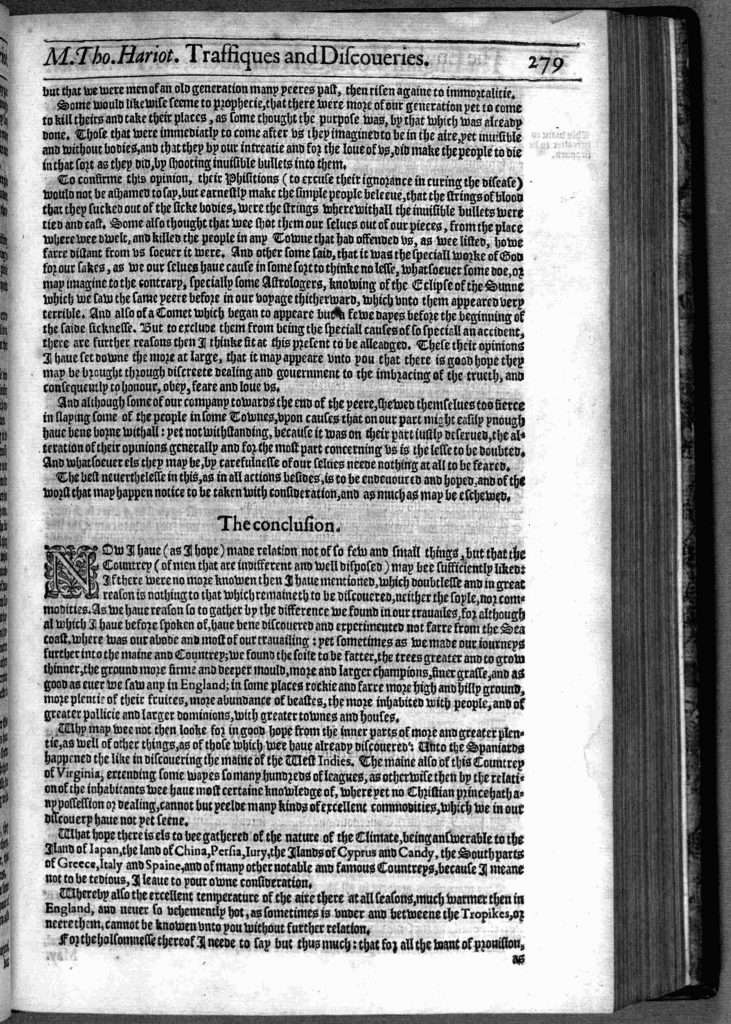 Diseases that Ravaged Indian Towns; an excerpt from A briefe and true report of the new found land of Virginia by Thomas Hariot (1588), Page 279

but that we were men of an old generation many yeeres past, then risen againe to immortalitie.

Some woulde likewise seeme to prophecie, that there were more of our generation yet to come to kill theirs and take their places, as some thought the purpose was, by that which was already done. Those that were immediatly to come after us they imagined to be in the aire, yet invisible and without bodies, and that they by our intreatie and for the love of us, did make the people to die in that sort as they did, by shooting invisible bullets into them.

To confirme this opinion, their Phisitions (to excuse their ignorance in curing the disease) would not be ashamed to say, but earnestly make the simple people beleeve, that the strings of blood that they sucked out of the sicke bodies, were the strings wherewithal the invisible bullets were tied and cast. Some also thought that wee shot them our selves out of our pieces, from the place where wee dwelt, and killed the people in any Towne that had offended us, as wee listed, howe farre distant from us soever it were. And other some said, that it was the speciall worke of God for our sakes, as we our selves have cause in some sorte to thinke no lesse, whatsoever some doe, or may imagine to the contrary, specially some Astrologers, knowing of the Eclipse of the Sunne which wee saw the same yeere before in our voyage thitherward, which unto them appeared very terrible. And also of a Comet which began to appeare but a fewe dayes before the beginning of the said sicknesse. But to exclude them from being the speciall causes of so speciall an accident, there are further reasons then I thinke fit at this present to be alleadged.

The Killing of Pemisapan; an excerpt from “An account of the particularities of the imployments of the English men left in Virginia” by Ralph Lane (1589) The Indians of Ossomocomuck; an excerpt from A briefe and true report of the new found land of Virginia by Thomas Hariot (1588)