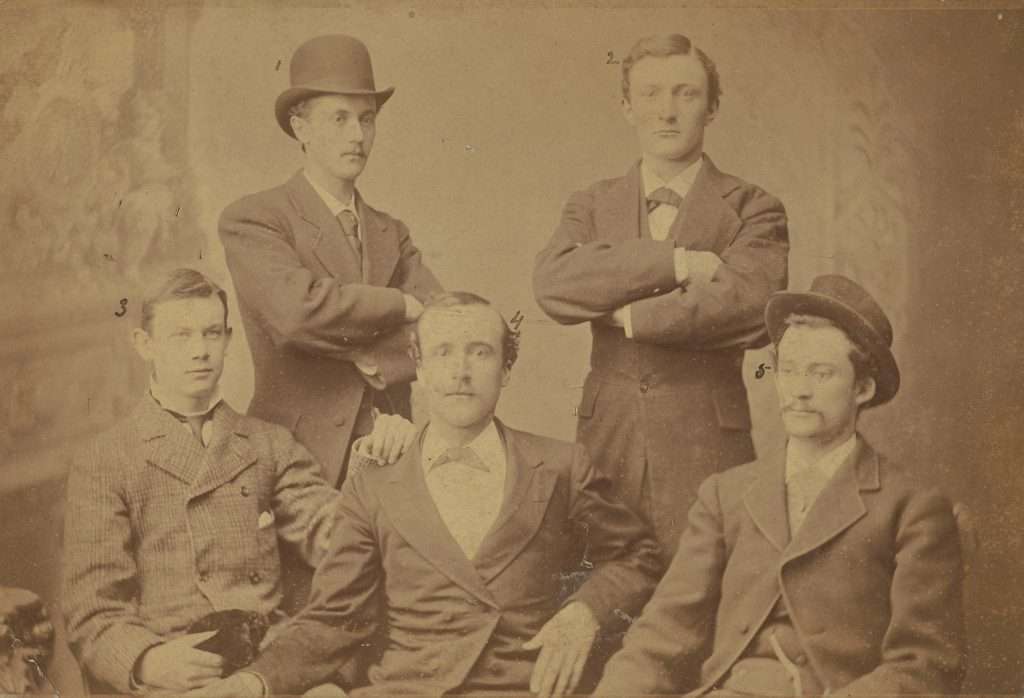 James Hardy Dillard was born on October 24, 1856, either in Southampton County or in neighboring Nansemond County. He was the son of James Dillard, a Southampton County farmer, and Sarah Brownrigg Cross Dillard. His first cousin Hardy Cross became a noted civil engineer who developed a new method of analyzing complex structural frames. Dillard’s education began at home, but at age twelve he went to live with an aunt in Norfolk in order to attend a classical school, where he studied Anglo-Saxon, German, Greek, and Latin. In 1873 he matriculated at Washington and Lee University, from which he received a master’s degree in 1876. He taught mathematics there while studying for a law degree, which he received in 1877. Dillard had planned to return to Norfolk and practice law, but instead he began a career in education as the principal of the city’s Rodman School. After five years he became one of two principals at the Norfolk Academy.

Dillard moved to Saint Louis, Missouri, in 1887 to become the principal of Mary Institute, a female preparatory school for Washington University. Simultaneously he served as Bridge Professor of Intellectual and Moral Philosophy at the university and also taught Latin as part of the Sauveur Summer School, a language program held at various New England schools and colleges. In 1891 William Preston Johnston, a former mentor from Washington and Lee University then serving as president of Tulane University, in New Orleans, Louisiana, recruited Dillard to become professor of Latin. Three years later Dillard became dean of the College of Arts and Sciences at Tulane, and he also served briefly in 1904 as acting president of the university.

With the Jeanes and Slater Funds 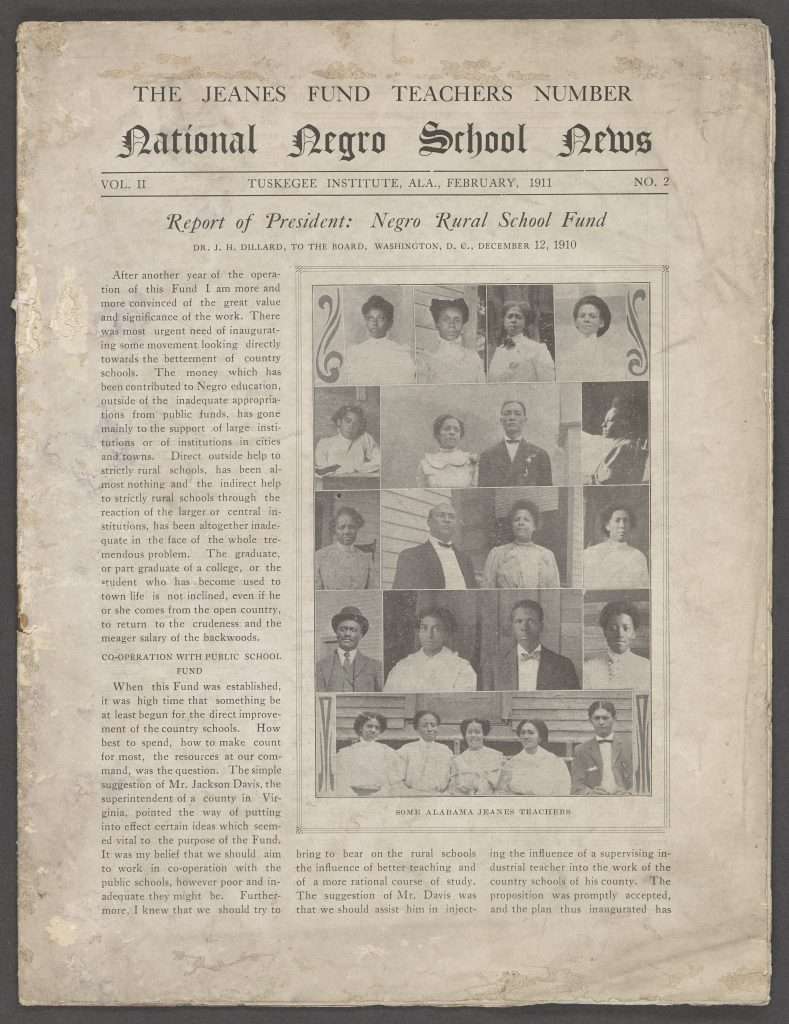 The creation in 1907 of the Negro Rural School Fund, Inc., Anna T. Jeanes Foundation, with a $1 million endowment from Anna T. Jeanes, of Philadelphia, changed Dillard’s professional life. The foundation sought to improve the education of African Americans in the southern states by paying the salaries of teachers and also improving buildings and equipment. In February 1908 Dillard attended the first meeting of the foundation’s board, which elected him president. The board’s members included such other notable men as Hollis Burke Frissell, of Hampton Normal and Agricultural Institute (later Hampton University); Booker T. Washington, of Tuskegee Institute (later University); Robert Russa Moton, who succeeded Washington at Tuskegee; the industrialist Andrew Carnegie; the philanthropist George Foster Peabody; and William Howard Taft, who was elected U.S. president later that year.

Even though Dillard’s family had been planters and had owned slaves, he had developed a dislike of the inequities and injustices that freedpeople experienced after the American Civil War (1861–1865). As a lifelong member and lay leader of the Episcopal Church, he came to believe that assisting African American education constituted part of his personal Christian ministry. In 1913 Dillard returned to Virginia and for the remainder of his career resided in Charlottesville. He became one of the best-known and most-active white proponents of improved educational opportunities for African Americans in the South. 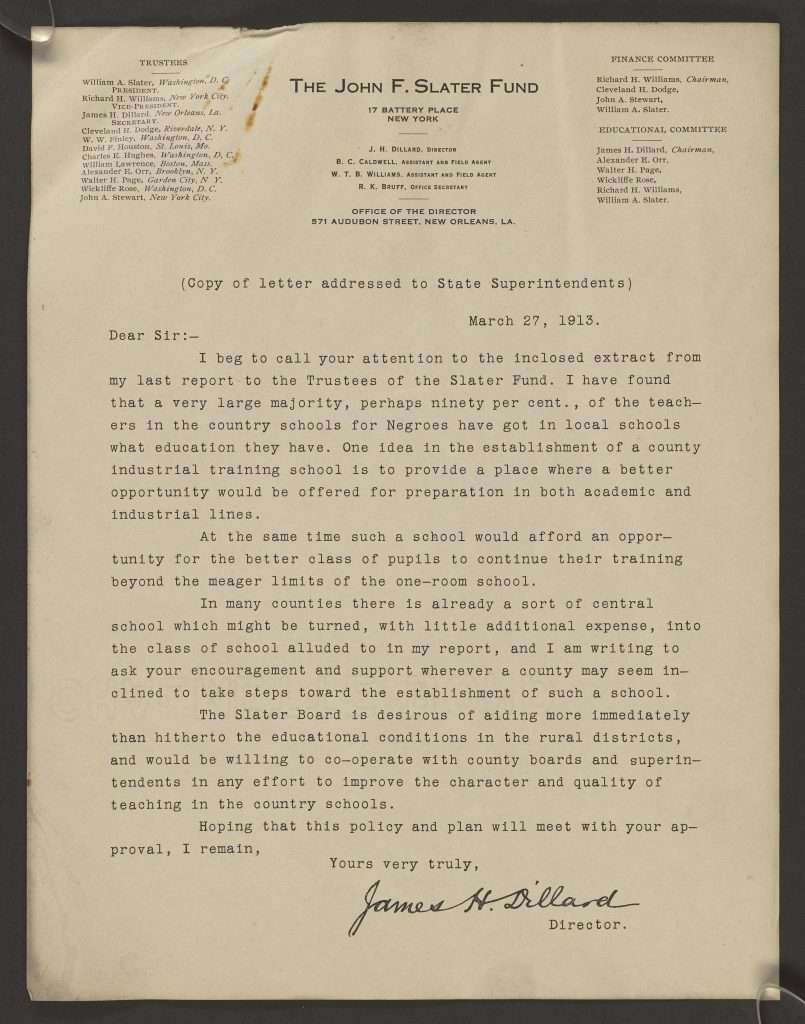 As a result of his work at the Jeanes Fund, in April 1910 Dillard also became the general agent of the John F. Slater Fund, another foundation with a similar objective. Later that year he was elected to a vacant seat on that fund’s board and also became the board’s secretary. Dillard served as president beginning in 1917. The Jeanes and Slater funds focused on rural areas of the South and emphasized vocational, or industrial, education within the states’ established systems of racially segregated public schools. Shortly after Dillard left the presidency, the Jeanes Foundation had funded teachers in 305 of the 1,415 counties in fourteen southern states. Virginia had more Jeanes teachers than any other state and had Jeanes teachers in a larger proportion of its counties than any of the other states. Dillard resigned as president both of the Anna T. Jeanes Foundation and of the John F. Slater Fund in 1931, although he remained on their boards until 1937, when the two funds joined together as the Southern Education Foundation, Inc. He was a founding director of the new foundation and served on its board until his death. 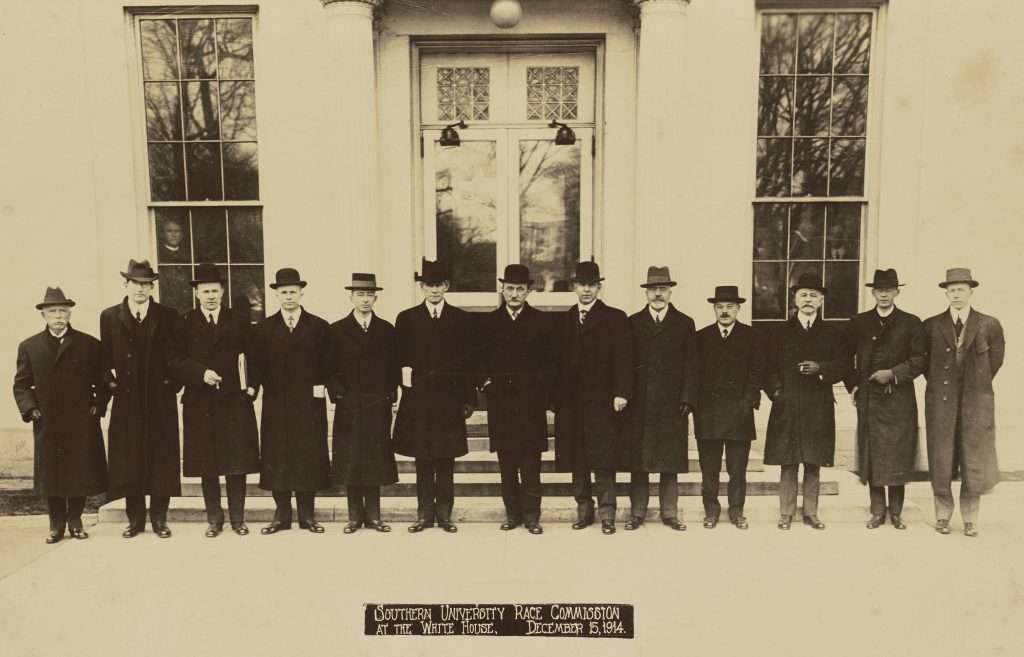 Dillard also sat on the Southern Education Board (1908–1914) and the General Education Board (1918–1929) and served as vice president (1923–1940) of the Phelps-Stokes Fund, which sought to improve educational opportunities for African Americans and encourage interracial cooperation. With his call for southern universities to take the lead in studying race relations, economics, education, and lynching in the South, he helped establish in 1912 the University Commission on Southern Race Questions. Dillard traveled to Africa in 1924 and also attended an international conference on Christian missions in Africa that met in Belgium in 1926. In recognition of his work Dillard received the Harmon Foundation’s gold medal in 1928 for helping to increase the number of African American training schools and the Roosevelt Medal in 1937 for improving understanding between the races. He also received honorary doctorates from Washington and Lee in 1889, Tulane in 1908, the University of the South in 1910, Harvard University in 1923, and Southwestern at Memphis (later Rhodes College) in 1932.

Dillard served on the board of visitors of the College of William and Mary from 1918 to 1940 and on the board of the General Theological Seminary, in New York City, from 1916 to 1925. While living in New Orleans he headed the New Orleans Free Kindergarten Association and the New Orleans Public Library, and he served on the Louisiana State Board of Education. When in 1930 New Orleans University and Straight College, two colleges for African Americans, combined, the new institution was named Dillard University in his honor.

During his teaching career Dillard published several short textbooks and readers: Dillard’s Exercises in Arithmetic (1885), Selections from Wordsworth (1890), Fifty Letters of Cicero (1901), and Aus dem deutschen Dichterwald: Favorite German Poems (1903). He also wrote From News Stand to Cyrano: Four Stray Pieces Mainly about Reading (1935) and contributed to Negro Migration in 1916–17 (1919). Dillard spoke widely on educational topics and published essays in many periodicals while engaged in work for the Jeanes and Slater funds, including in the Virginia Journal of Education.Some of his articles appeared in a collected edition, Selected Writings of James Hardy Dillard (1932), and others in Papers by the Way (1940). 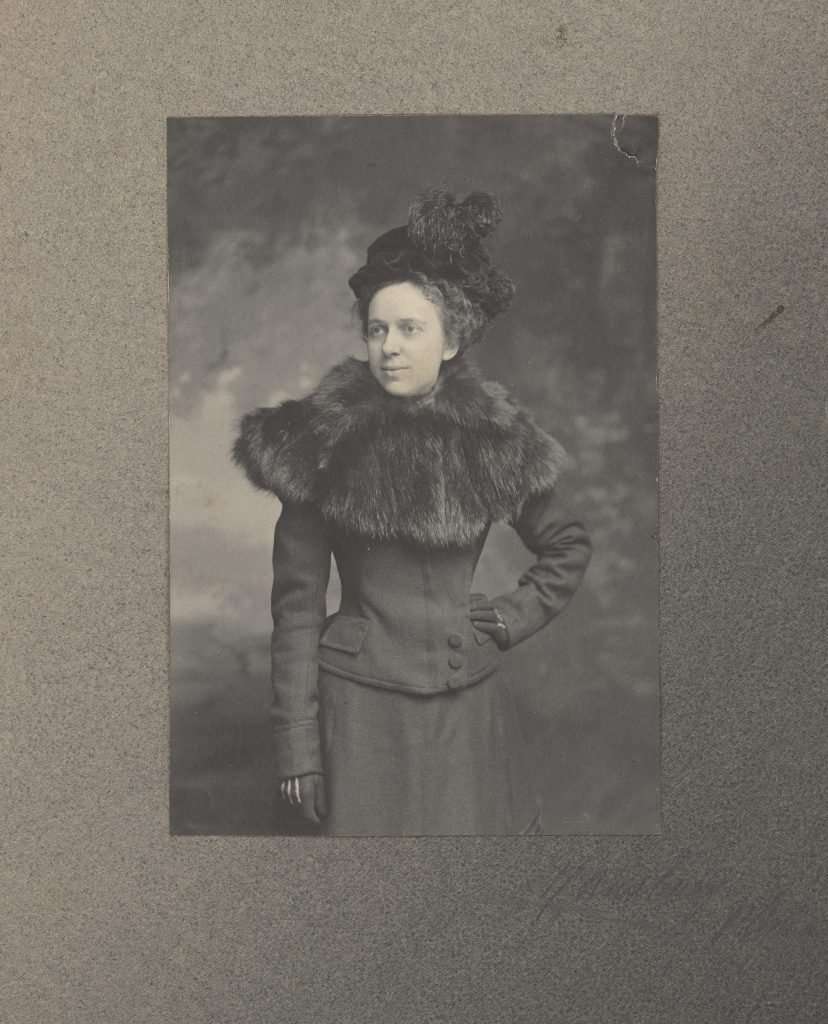 In Norfolk on July 5, 1881, Dillard married Mary Catharine Harmanson. They had one son and five daughters before her death on September 20, 1896. Dillard married Avarene Lippincott Budd in Mount Holly, New Jersey, on November 18, 1899. Their two daughters and two sons included Hardy Cross Dillard, who became a distinguished law professor at the University of Virginia and judge of the International Court of Justice.

Dillard died at his Charlottesville home on August 2, 1940, and was buried in the city’s Riverview Cemetery. One editorial tribute described him as “one of Virginia’s most selfless servants and devoted humanitarians” and related that Booker T. Washington had once said that Dillard could speak “to the poorest Negro in Alabama in the same way that he speaks to President Taft.”