Early in the War

The 1860 United States Census reported a free population in Pittsylvania County of 17,764 and a total population of 32,104. Danville with a population of 3,500, meanwhile, had emerged as the capital of a vast leaf-tobacco empire in Southside Virginia. By inspecting, storing, manufacturing, shipping, and marketing tobacco, it developed lucrative economic and commercial links with the rest of Virginia, North Carolina, and beyond, perhaps most important, in the form of the Richmond and Danville Railroad, which began construction in 1848. In the winter of 1860, some of the town’s residents, and most of those in the surrounding county, opposed secession because war would threaten the prosperous tobacco industry. By early in 1861, however, many Danvillians had endorsed leaving the Union, and celebrated the fact that public opinion turned in their favor following U.S. president Abraham Lincoln‘s call in April for volunteers to suppress the rebellion. Not long after that, on April 17, the Virginia Convention, meeting in Richmond, voted to secede.

Danville’s wartime contributions extended from individuals to entrepreneurs to government. Enough townsmen eventually volunteered for Confederate military service to form one company each of cavalry and artillery and more than two companies of infantry, as well as a home guard. One church supported the war effort by donating its brass bell to be melted down to make cannons. Clothing mills and weapons manufacturers churned out huge amounts of uniform fabric, arms, and armament. The town government supported soldiers’ families and the poor by such means as creating the Corporation Store to distribute free food and firewood to the needy. 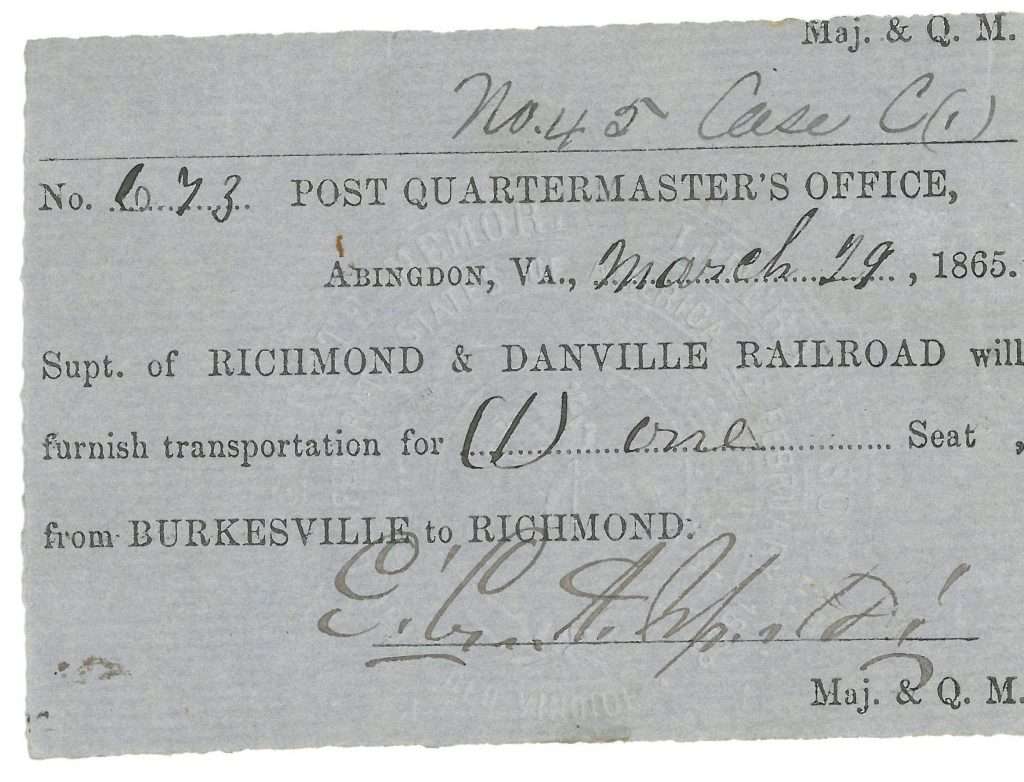 The Richmond and Danville Railroad made continuous improvements that kept trains going and greatly aided the war effort. It erected a telegraph line, replaced inferior rails, utilized captured locomotive parts, and manufactured gun carriages for the Confederacy. It even purchased the vast majority of stock in the new Piedmont Railroad, which was to run from Danville south to Greensboro, North Carolina. Its chief engineer, Captain Edmund Myers, completed the task with inferior and insufficient supplies, and it took more than two years. Because of the different gauge of its track, and much to the annoyance of passengers, all cargo had to be unloaded at Danville from the Richmond and Danville Railroad and reloaded onto the Piedmont Railroad. This was a typical practice in Richmond, Petersburg, and other cities, because it gave local employment to wagoners.

The Confederate government took advantage of Danville’s security and infrastructure by locating military- and government-support facilities there. The Confederate Subsistence Department established the Danville Depot in a former tobacco warehouse. Operated by Major William T. Sutherlin, it stocked everything from clothing to cooking utensils to writing paper to rations, which it shipped by rail to Richmond and beyond. The Danville Arsenal employed more than a hundred men to make new arms and armaments and to repair weapons. 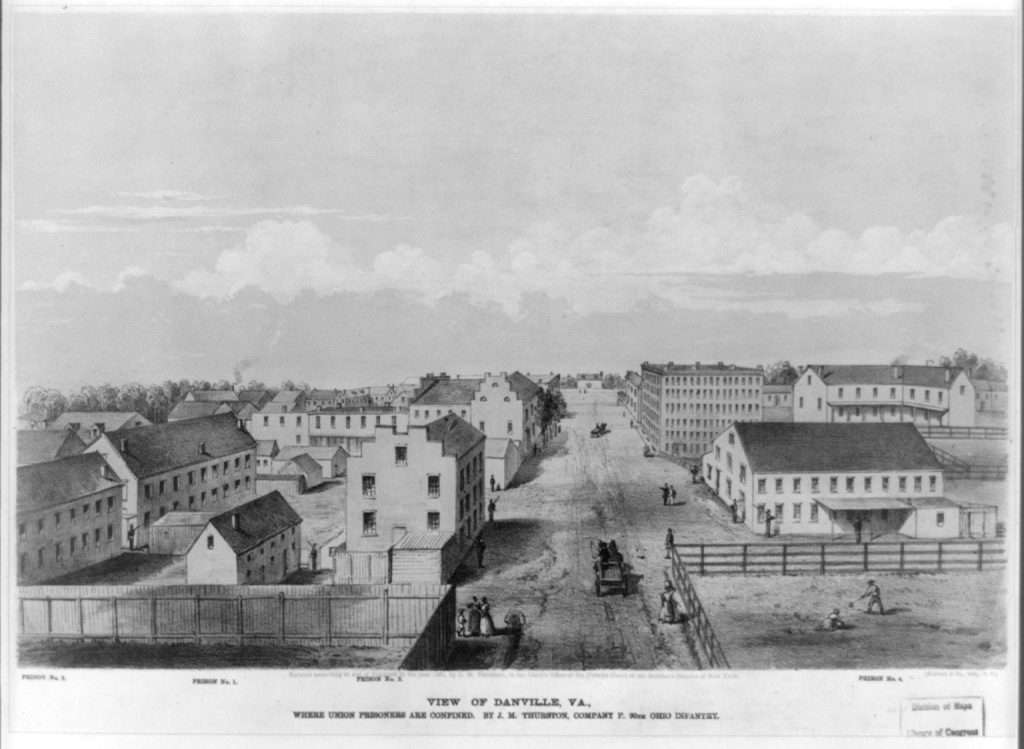 Danville Prisons During the Civil War

Numerous waves of outsiders—including fresh regimental recruits, civilian workers, desperate refugees, even entire government departments—swelled Danville’s wartime population and strained its resources, but none so seriously as the hospital and prison inmates. Thousands of sick and wounded Confederate soldiers and Union prisoners of war temporarily resided in Danville, whose care required extensive resources.

The Peninsula Campaign and the Seven Days’ Battles in the spring and early summer of 1862 resulted in casualties that overwhelmed Richmond’s hospitals. The railroad transported sick and wounded Confederate soldiers southwest to Danville, where doctors and nurses tended to their needs. The hospitals were initially located in former tobacco warehouses, but, when Union prisoners of war began to arrive in November 1863, they were relocated to an enormous hospital complex near the train depot. With Richmond’s prisons, including Libby and Belle Isle, overflowing, Confederate general Robert E. Lee recommended Danville to Confederate secretary of war James A. Seddon as a site for new prisons. Hundreds and even thousands of prisoners at a time were held in the dark, grimy warehouses from which they were forbidden even to look out the windows. The food rations were not terrible by most standards, and the prisoners were allowed to use the unused portion of the Green Hill Cemetery for a garden. Because of the ravages of smallpox and the severe cold in the winter months, the prison death rate was 17 percent. (The overall mortality rate for Union prisoners was 15 percent.) 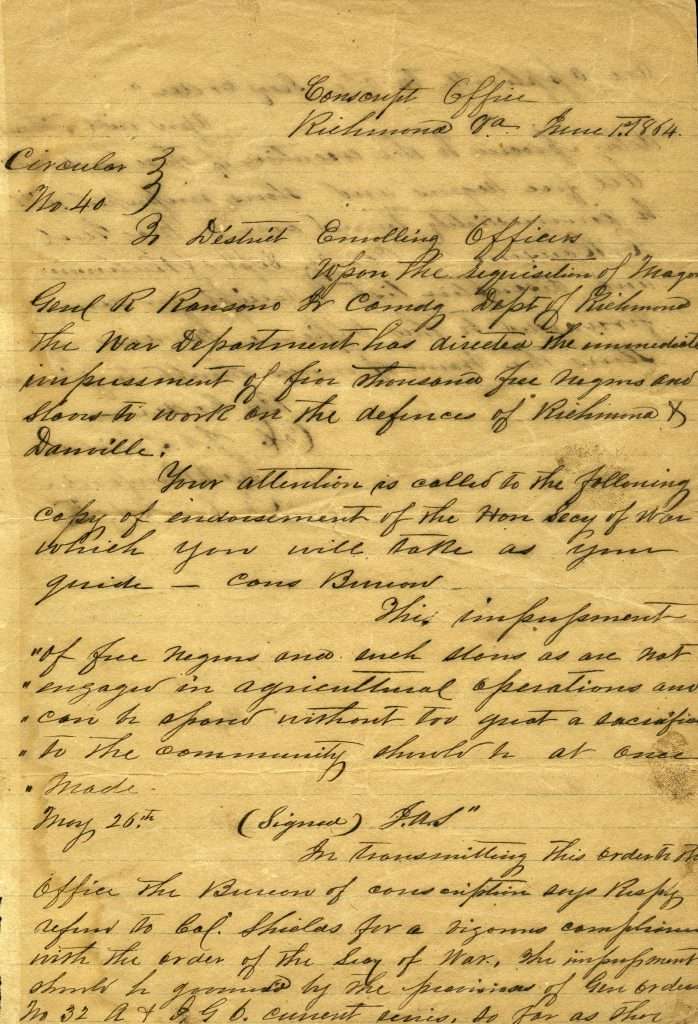 Impressment of Slaves and Free Blacks

While Union general-in-chief Ulysses S. Grant and the Army of the Potomac began the siege of Petersburg, northeast of Danville, in 1864, Union forces in the Shenandoah Valley came within striking distance of the town. Danville residents and the Home Guard had just completed a series of earthworks around the town when, in mid-June 1864, they gathered at the nearby Staunton Bridge to prevent a Union cavalry raid on the town. It was Danville’s only serious wartime threat.

When Richmond fell on April 2, 1865, the Confederate government determined Danville to be the logical place to relocate. It had abundant supplies and intact railroad networks; it also served the psychological need of remaining within Virginia’s borders. After a long train ride, Confederate president Jefferson Davis and his cabinet arrived in Danville on the evening of April 3. Every available room in town was filled with clerks, government workers, and eventually Richmond refugees. With no reliable word from Generals Lee and Joseph E. Johnston, the government was essentially paralyzed. On April 5, President Davis released his last official proclamation, which expressed relief that Richmond no longer needed defending: “Relieved from the necessity of guarding particular points, our army will be free to move from point to point, to strike the enemy in detail far from his base.” This was too optimistic, however, and Lee surrendered four days later, with word reaching Davis in Danville on April 10. The president was stunned but refused to accept the reality of the Confederacy’s collapse. After hurried preparations, he and the cabinet departed that night, hoping to maintain resistance farther south.

Thousands of paroled soldiers flocked to Danville in the weeks following Lee’s surrender, seeking supplies and transportation. Union officials were also aware of the town’s advantages, as well as the large number of paroled soldiers, and deployed a corps to Danville to occupy and preserve order. The majority of Union forces departed the town early in May and relinquished control to the civil authorities. Throughout the summer, thousands of recently paroled Confederate prisoners passed through the town, and the last Union troops were gone by the end of the year.

RELATED CONTENT
Categories:
MAP
TIMELINE
January 2, 1861
The mayor of Danville informs the town council that he intends to ask Governor John Letcher for arms or the funds with which to purchase them.
January 12, 1861
Volunteers from Danville form the Danville Home Guard.
April 1861
Military units that will later be designated as the Danville Blues and the Danville Grays of the 18th Virginia Infantry and the Danville Artillery are formed by volunteers from Danville.
Winter 1862
Danville appropriates funds to raise a company of cavalry, later designated Company C, 5th Virginia Cavalry.
April 1862
The Danville Arsenal, under the management of Lieutenant Edward S. Hutter, is established. It begins manufacturing, repairing, and inspecting weapons for the Confederacy.
January 1863
Danville creates the Corporation Store to provide free food and firewood to white citizens in need.
August 1863
A committee appointed by the Danville town council purchases the land for a new town cemetery. It eventually will be known as the Green Hill Cemetery, although the U.S. government will later purchase the portion in which Union prisoners are buried to create the Danville National Cemetery.
September 1863
The fortification of Danville to protect Confederate facilities and interests is recommended. Civilians, slaves, and Union prisoners labor to create the extensive earthworks, which are finally completed in June 1864.
November 1863
The Danville military hospital moves from tobacco warehouses to an empty hotel near the Richmond and Danville Railroad depot. A large complex of hospital buildings is erected on the hill behind the hotel. The vacated warehouses are converted into prisons for Union soldiers.
May 22, 1864
The Piedmont Railroad, running from Danville to Greensboro, is completed.
April 3, 1865
Confederate president Jefferson Davis and his cabinet relocate the Confederate capital to Danville after the fall of Richmond.
April 5, 1865
Confederate president Jefferson Davis, in Danville, releases his last official proclamation, which overoptimistically outlines a military strategy.
April 10, 1865
Confederate president Jefferson Davis, at the new capital in Danville, receives word of Robert E. Lee's surrender at Appomattox Court House.
April 11—17, 1865
Sometime between these dates, the Danville Arsenal is accidentally set on fire, probably by mischievous boys. The ordnance explodes for six hours and leaves a huge crater. At least fourteen people are killed.
April 27, 1865
Danville's mayor surrenders the town to Union captain Henry Vanderweyde, a member of Colonel Thomas W. Hyde's staff and a former Danville prisoner.
May 10, 1865
Union troops, with the exception of one regiment, depart Danville after town leaders take oaths of allegiance.
FURTHER READING
CITE THIS ENTRY