William Henry Bagwell Custis was born on December 28, 1814, in Accomack County and was the only surviving son of Henry Bagwell Custis, a slaveholding planter, and Elizabeth Fletcher Custis. After the death of his father in 1817, Custis inherited 575 acres of his father’s 975-acre seaside plantation. Custis’s mother remarried in September 1819 and began a new family. His relations with his stepfather, William Robinson Custis, were strained. The stepfather died in the autumn of 1839 and by his will denied his stepchildren any inheritance from his estate and forbade his children to entangle themselves financially with their half siblings. William H. B. Custis disobeyed and the next year gave bond for the marriage of his half sister and ward. Custis himself posted a marriage bond on September 19, 1840, and on that date or soon thereafter married Emeline V. S. Conquest. Of their five sons and four daughters, only two daughters, who never married, survived Custis.

In 1834 Custis received an AB from Indiana College (later Indiana University) in Bloomington, and three years later the college, following a practice in force until 1876, automatically awarded him an AM without further academic study. Accounted an eloquent, persuasive speaker, Custis, a Democrat, represented Accomack County in the House of Delegates for the 1842–1843 session. He sat on the Committees on the Militia Laws and on Trade and Mechanic Arts. Reelected to the 1843–1844 assembly, he served on a committee to examine the clerk’s office and again on the Committee on Trade and Mechanic Arts. Accomack voters returned Custis to the House for the 1845–1846 term. He chaired a committee to examine executive expenditures and also served on the Committee to Examine the Public Library. In August 1850 he campaigned for one of the two seats representing Accomack and Northampton counties in a convention called to revise the state constitution but finished third in the four-candidate poll.

During the next decade Custis devoted himself to farming. The number of his slaves more than doubled, from nineteen in 1850 to forty-eight on the eve of the Civil War. In 1861 Custis represented Accomack County at the convention called to consider Virginia’s response to the secession crisis. In his only speech, he decried secession as a declaration of war and viewed remaining in the Union as the best protection for the Eastern Shore’s slaves and property. Even if no other delegate would vote against secession, he vowed to “stand here solitary and alone and do it.” As good as his word, Custis opposed secession on April 4 when it failed and again on April 17 when it passed. Despite an earlier protest that he would rather cut off his arm than sign the Ordinance of Secession, he affixed his name to the document and attended the two subsequent adjourned sessions of the convention. He took no other recorded part in the Civil War, and his Unionist sympathies led him to visit Wheeling at least once during the conflict. 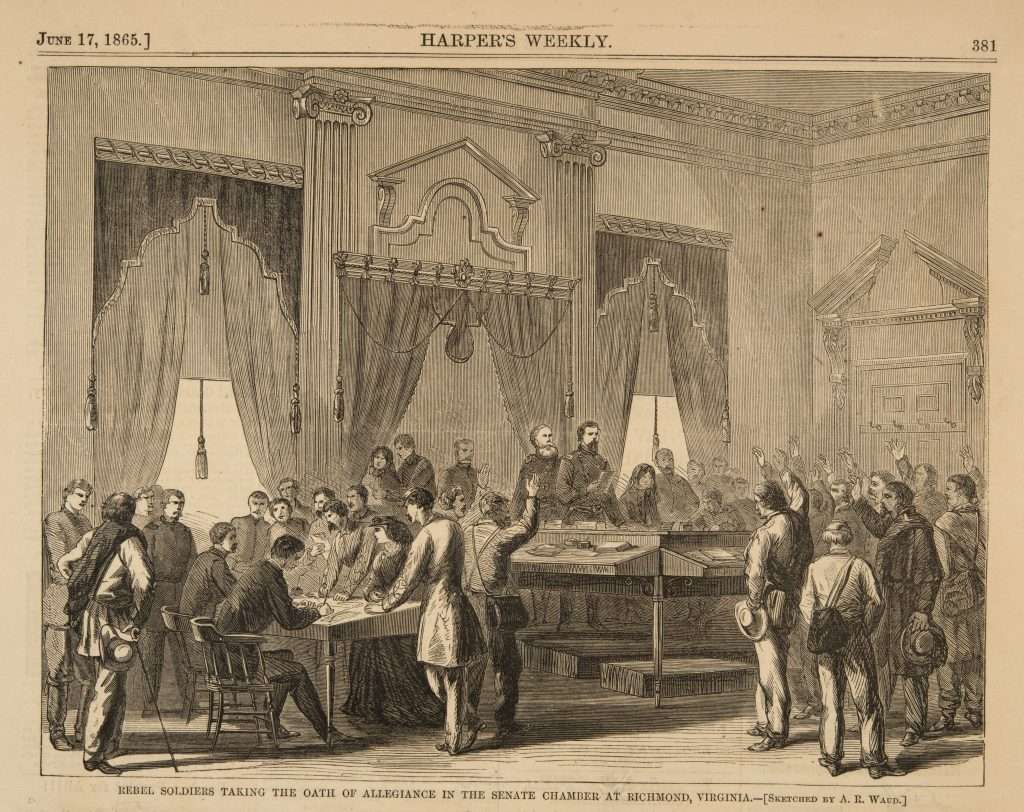 Rebel Soldiers Taking the Oath of Allegiance in the Senate Chamber at Richmond, Virginia.

In August 1865 Custis entered a tight five-man race for election to represent the twenty-county First Congressional District, embracing the Eastern Shore, the Northern Neck, and most of the Tidewater. Campaigning on his eligibility because he could take the prescribed test oath affirming that he had not borne arms against the United States or otherwise supported the Southern cause, Custis narrowly defeated his opponents despite missing campaign opportunities at several district court days and neglecting to run the requisite election announcements in the regional newspapers. Along with all the other members of the Thirty-ninth Congress elected from the former Confederate states, he was denied his seat when Radical Republicans in the House of Representatives instructed the clerk to omit those states in the organizational roll call of members-elect.

In March 1869 the commander of the First Military District named Custis clerk of the Accomack County Court to fill a vacancy caused by the removal of the incumbent under a federal law that required replacement of all Virginia, Mississippi, and Texas officials who had any recorded Confederate activity. Custis continued in office through June 1887 and from 1869 until 1875 simultaneously served as clerk of the circuit court. About 1872 he moved from his home estate at Ravenswood to a 3.75-acre parcel he acquired at the county seat. After several weeks of declining health, Custis died at Accomac Court House on October 7, 1889, and was buried in the family cemetery at Ravenswood in Accomack County.