Custis was born in Northampton County, at the Hungars Creek plantation of his parents, John Custis (ca. 1654–1714), later a member of the governor’s Council, and his first wife, Margaret Michael Custis. A bequest of £100 from his grandfather John Custis (ca. 1629–1696), also a member of the governor’s Council, helped support his education in England, where for almost seven years he studied the intricacies of the tobacco trade with the London consignment merchant Micajah Perry. Indirect evidence in a commonplace book Custis compiled suggests that he also had some formal schooling in England. He returned to Virginia probably about 1699 but certainly by April 25, 1701, when he was named a justice of the peace for Northampton County.

From his paternal grandfather Custis inherited thirteen slaves, Smith Island in the Chesapeake Bay, and Arlington, a fine three-story brick mansion on 550 acres of land in Northampton County. He acquired additional property in that county and in 1704 paid quitrents on 3,250 acres there. Custis represented Northampton County in the House of Burgesses for the sessions that met from October through November 1705 and from April through June 1706. 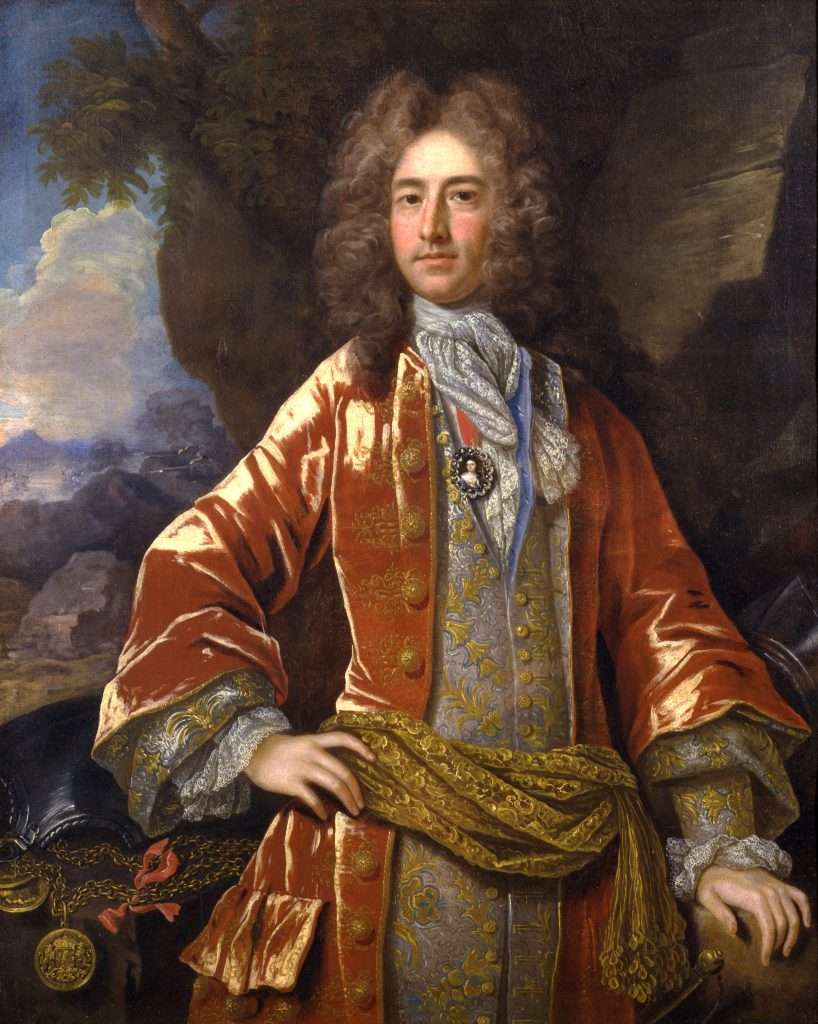 On May 4, 1706, in York County, Custis married Frances Parke, the elder legitimate daughter and heiress of Daniel Parke, a former member of the governor’s Council then serving as governor of the Leeward Islands. Parke did not pay the promised marriage settlement of £4,000, but he placed the management of his Virginia properties in Custis’s hands and awarded him one-fifth of the net proceeds of the plantation profits. Parke’s murder in 1710 plunged Custis into the morass of an estate dispute that lasted three generations. Parke had bequeathed his properties in England and Virginia to Frances Custis and his properties in the Leeward Islands to an illegitimate daughter there. In order to pay Parke’s considerable debts and desired legacies, Custis and his wife secured passage of legislative acts in 1712 to break the entail and allow them to sell portions of the estate. William Byrd (1674–1744), who had married Frances Custis’s younger legitimate sister, agreed to accept the land and slaves designated to be sold in exchange for assuming Parke’s English debts and the legacies charged to the Virginia estate. In the 1720s the Antiguan heirs sought to force Custis to pay Parke’s debts in the Leeward Islands. Custis prophetically warned his adversary, “I would go to Law the whole Course of my Life; spend the last penny I have in the world rather than I will pay one farthing of your unjust and unreasonable demand … I must confess you may give me some trouble; and put me to some Charge; but depend upon it; where you put me to one penny worth you will put your self to a pound.” The transatlantic suits and countersuits, appeals and counterappeals, consumed Custis’s time and patience for the rest of his life and dragged on until the American Revolution (1775–1783) rendered the dispute moot. 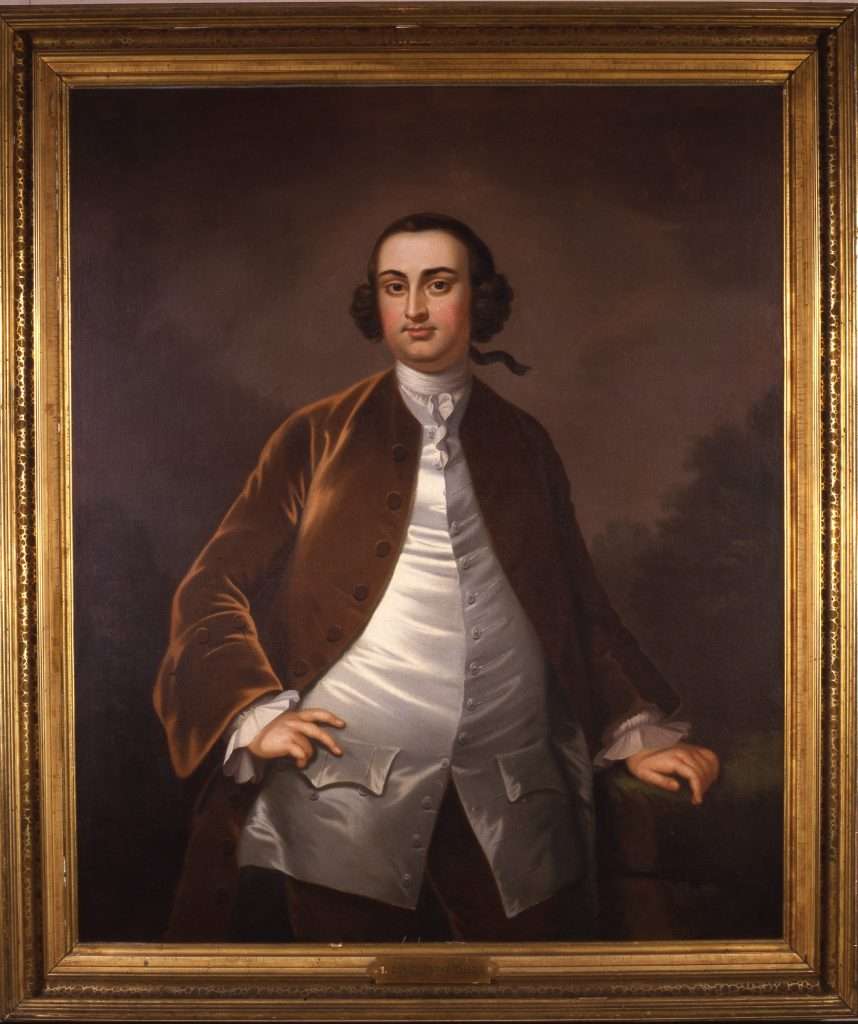 Custis and his wife had two daughters and two sons and divided their time between Arlington and a former Parke family plantation on Queen’s Creek in York County. Their marriage was a stormy one between two strong-willed people who were not well-suited for each other. In June 1714 they drew up but never formally executed articles of agreement in which Custis promised to provide a plentiful maintenance for his wife and children and not to interfere with her running of their household if she forbore calling him vile names or using ill language. After Frances Custis died of smallpox on March 13, 1715, their surviving daughter grew up under the care of her maternal grand-aunt. Custis’s surviving son, Daniel Parke Custis, became a successful planter but did not marry until he was almost forty.

Later in life, Custis had an affair with Ann Moody, the wife of a tavern owner, to whom he provided many gifts that his son later tried to recover and also a £20 annuity. With his slave Alice, Custis had a son christened John (but called Jack) whom he freed in February 1748. At that time Custis deeded him 250 acres of land on Queen’s Creek in York County and the boy’s mother, all her other children, and four male slaves about ten years old of his own choosing. Custis had a portrait painted of his son, posted a bond that required his heirs to provide John with £20, fine clothing, and provisions each year until he reached age twenty-one, and in his will instructed Daniel Parke Custis to build John a house furnished with Russian leather chairs, two black walnut tables, and three feather beds. 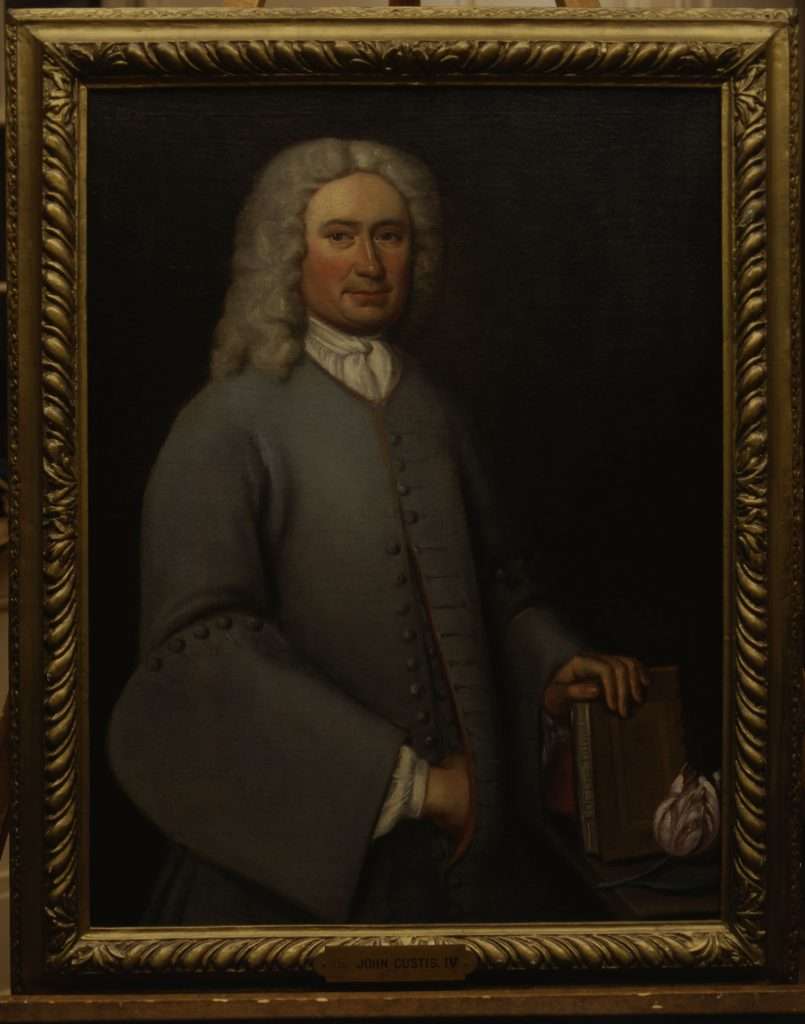 By 1717 Custis had moved to Williamsburg. (Later writers often refer to him as John Custis, of Williamsburg, to distinguish him from his grandfather, father, and other relatives of the same name.) He enjoyed reading, delighted in prints and fine paintings, and at his house on Francis Street created a magnificent garden that eventually encompassed almost four acres and featured topiary, classical statues, and formal gravel walkways. Two portraits depict Custis with cut tulips and holding a small book entitled Of the Tulip. He may have written an essay, no longer extant, on that topic for circulation among his friends. Custis avidly collected, imported, traded, and cultivated plant specimens, especially flowers, trees, and shrubs. He knew Mark Catesby during the English naturalist’s sojourn in Williamsburg (and owned a copy of his Natural History of Carolina, Florida and the Bahama Islands), welcomed John Bartram when the Pennsylvania botanist traveled to Virginia, and enjoyed a friendly correspondence for more than a dozen years with Peter Collinson, a Quaker horticulturist and member of the Royal Society of London for Improving Natural Knowledge. 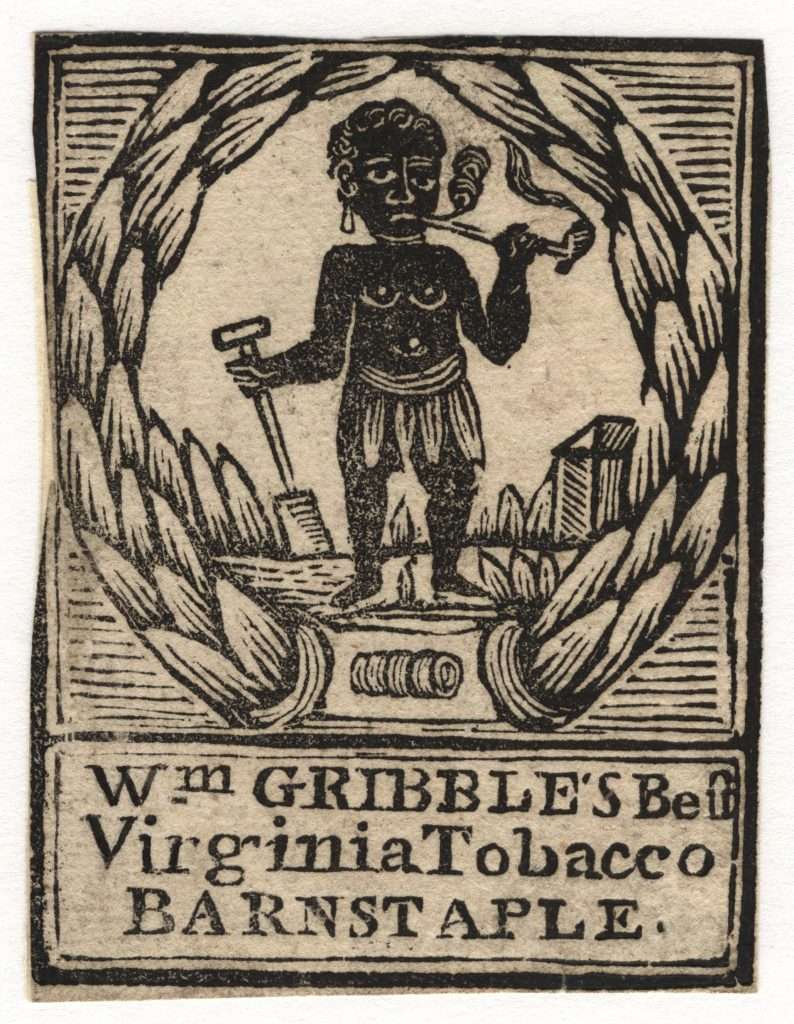 Custis was able to indulge his love of gardening and fine art because he was a canny tobacco planter. After his father died in 1714, Custis inherited additional property in Accomack County, and by that date he owned more than 15,000 acres of land, principally in Northampton, King William, New Kent, and York counties. At the time of his death he owned approximately 200 slaves. His experience in a London mercantile house gave him a keen understanding of the transatlantic economy. Rather than confine his trade to one merchant, Custis varied the merchants and ports he did business with in order to secure better prices for his tobacco. He carefully measured the bolts of cloth and medicines he received from London, Bristol, and Glasgow, complained sharply when the goods he had ordered failed to meet his expectations, and threatened when cheated to take his business elsewhere. As a wealthy planter who was not in debt to the British merchants, Custis was able to parlay his relationship with his various overseas merchants into political lobbying at critical times.

Custis represented the College of William and Mary in the House of Burgesses that met in three sessions in 1718. Although initially he was close enough to Alexander Spotswood to persuade the new lieutenant governor to stand as godfather to his son, Custis’s connection by marriage to the powerful Byrd and Ludwell families eventually placed him in opposition to Spotswood. Political differences became personal in 1717 after Spotswood created a vista for the governor’s palace by cutting down valuable timber on Custis’s property. For a time Custis ceased speaking to Spotswood, and in 1721 he supported Commissary James Blair‘s trip to England to secure the removal of the lieutenant governor. In 1725 Spotswood’s replacement, Hugh Drysdale, recommended Custis for appointment to the governor’s Council, and after extensive lobbying by one of Custis’s London commission merchants, the king acquiesced on June 2, 1727. Custis took his seat on September 11 of that year. As a member of the Council, he opposed the Tobacco Inspection Act of 1730 and two years later warned his consignment merchants that by pressing for a “cruell and unjust” act to help them more easily recover debts in the colonies they had “so incensd the Country; that you will force them as soon as convenient to have nothing to do with you.”

Beginning late in the 1710s Custis suffered long bouts of ill health, including blinding headaches, sensitivity to light, and crippling pain in his joints that occasionally confined him to his house for months at a time. By 1742 he may have contracted yaws from some diseased slaves he had purchased and tried to treat. Although Custis diligently attended Council meetings for almost twenty years, he appeared only sporadically after April 1747 and sat for last time on April 14, 1749. The lieutenant governor planned to depart for England in August of that year, and during his absence Custis, as senior member of the Council, would have become president, or acting governor. On August 25, 1749, Custis declared his incapacity to serve, and the next day the lieutenant governor suspended him from the Council.

John Custis wrote his will on November 14, 1749, and died on an unrecorded date not long thereafter, probably within a few days. His death was known in London as early as March 1750. His will was proved in the James City County Court on April 9, 1750, and in the Prerogative Court of Canterbury on November 19, 1753. In his will Custis required that “my Real Dead Body and not a Sham Coffin” be buried next to his grandfather’s grave at Arlington. Custis set aside £100 for a handsome tomb of the finest white marble and directed his son, on pain of being cut off with only one shilling, to place on it the infamous wording that he had “Yet lived but Seven years which was the Space of time he kept a Batchelors House at Arlington on the Eastern Shoar of Virginia. This Inscription put on this Stone by his own positive Orders.”