Culpeper was the son of Sir John Culpeper (after 1644 first baron Culpeper of Thoresway) and his second wife, Judith Culpeper Culpeper. He was born at Greenway Court, his father’s English estate in Hollingbourne Parish in Kent, where he was christened on March 21, 1635. His family included several prominent investors in the Virginia Company of London and other men who sought large grants of land in North America. One of his second cousins, the widowed Frances Culpeper Stephens, married Sir William Berkeley and was a major influence in Virginia politics in the 1670s and 1680s.

Culpeper’s father was master of rolls under King Charles I and accompanied the royal family into exile at the end of the English Civil Wars. His loyalty to the Crown was well rewarded. On September 18, 1649, Charles II granted John Culpeper and six other close associates ownership of the Northern Neck, the land between the Potomac and Rappahannock rivers in Virginia. Even though Parliament condemned and sold the Culpeper estates in 1651, the exiled king offered to restore to the family what it had lost. Culpeper lived with his father in the Netherlands during most of the royal exile, and at The Hague on August 3, 1659, he married Margaretta van Hesse, a wealthy Dutch heiress. They had one daughter. In later years his wife resided in Kent at Leeds Castle, which Culpeper purchased with her money, and he lived openly on the Isle of Wight and in London with his mistress, Susanna Willis. They had two daughters. 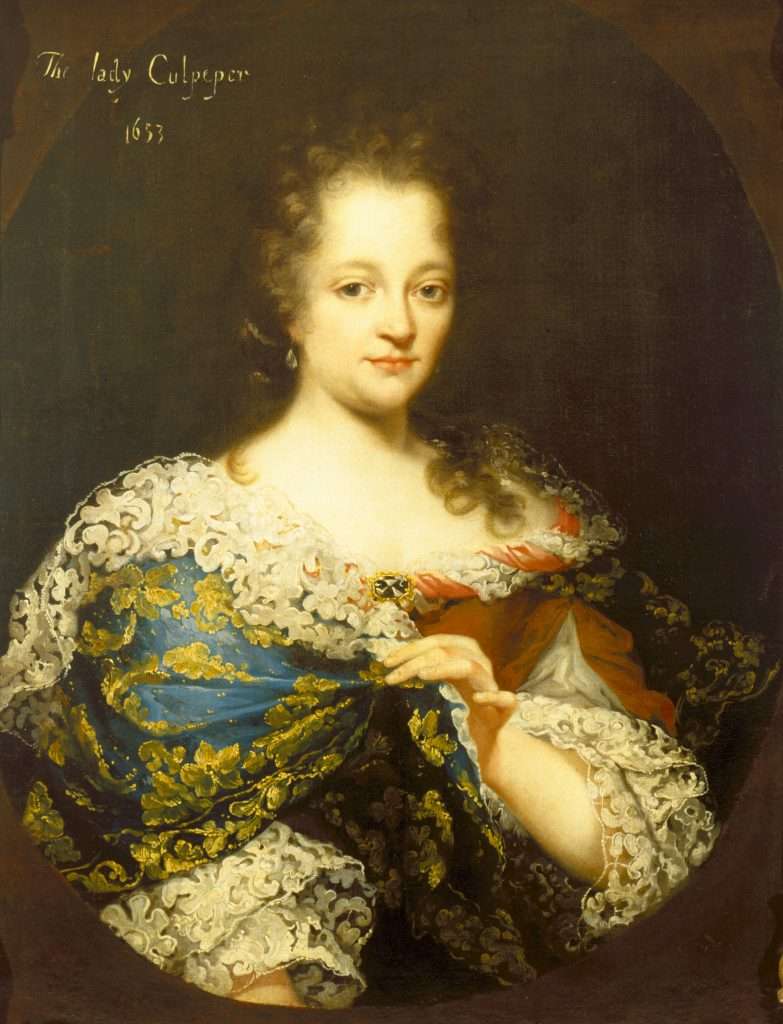 Culpeper’s father died a few months after the Restoration in 1660, but Charles II did not fulfill his promise to restore the Culpeper estates, which the elder Culpeper had valued at £12,000. Succeeding his father as baron, Culpeper enjoyed royal patronage for much of his life. In July 1661 the king appointed him captain of and in mid-1664 governor of the Isle of Wight, a post he filled competently until 1668. In 1671 Culpeper won appointment to the Council for Foreign Plantations, a select committee of the royal council, and he became vice president when it was reorganized in September 1672. From then until the council was dissolved in December 1674 he received an annual salary of £600.

Culpeper’s interest in Virginia dated from that experience. He and the secretary of state, Henry Bennet, earl of Arlington, obtained from the king on February 25, 1673, a grant allowing them for thirty-one years to receive escheats and quitrents collected in Virginia, as well as the power to grant all land not already granted by the governor. In 1681 Culpeper bought out Arlington’s interest in their joint grant and also secured five-sixths ownership of the Northern Neck Proprietary (the remaining one-sixth belonged to his cousin, Alexander Culpeper). Those transactions caused considerable consternation among the colonists, who perceived a threat to their land titles and a loss of independence for the General Assembly. In May 1684, after much lobbying by the colonists, Culpeper surrendered to the Crown his interest in the Arlington grant for an annual pension of £600 for twenty and a half years.

Culpeper’s ambitions included more than just proprietary interests. On July 8, 1675, the king granted him a patent for the office of governor of Virginia to succeed Sir William Berkeley whenever he died, resigned, or was recalled. Culpeper held the governorship from Berkeley’s death on July 9, 1677, until August 1683 but seemed more interested in collecting his salary and perquisites than in governing and living in the colony. For more than two years Herbert Jeffreys and, following his death, Sir Henry Chicheley administered the government as lieutenant governors. Not until late in 1679 did Culpeper yield to increasingly blunt prodding from the Crown and sail to Virginia.

Culpeper arrived in the colony on May 3, 1680, with royal instructions that sought clearly to define the subordinate status of the colony and the General Assembly within the Restoration empire. Culpeper’s orders restricted his power to convene the assembly, which had usually met annually. The king also commanded the governor to secure passage of a law authorizing regular taxes on the export of tobacco, on persons transported to the colony, and on every ship that docked there, with the revenue thus raised going to support the salaries and other expenses of the provincial government. Despite the protests of the colonists, Culpeper persuaded the assembly to enact the taxes, which diminished the assembly’s ability to influence the governor by reducing or enlarging his income. Culpeper also secured passage of an act to establish towns and tobacco inspection warehouses in every county and a general act of indemnity that ended the continuing litigation that followed Bacon’s Rebellion.

Culpeper’s instructions required him to curtail the capacity of the burgesses to initiate legislation and thus placed the shaping of legislation in the hands of the governor and Council. The instructions also required the governor to terminate the assembly’s jurisdiction as the court of highest appeal in the colony and threw final jurisdiction of Virginia disputes to the Privy Council in England. Culpeper failed to press the first of those instructions, and he implemented the second indirectly by neglecting to appoint Council members to meet with the burgesses’ Committee for Private Causes. With pending appeals hanging in limbo, it was left to Culpeper’s successor, Francis Howard, baron Howard of Effingham, to settle the issue forthrightly.

Having accomplished the king’s agenda to his own satisfaction, Culpeper departed for New England on August 11, 1680, a mere three months after arriving, and then returned to England. He left the colony in economic crisis, suffering from abundant harvests of tobacco and declining prices. Some prominent Virginians began pleading for a mandatory cessation of tobacco planting, and during the winter of 1681–1682 many other Virginians petitioned for a meeting of the assembly to pass the necessary laws. Lieutenant Governor Sir Henry Chicheley called an assembly for April 1682, but having received orders not to summon the assembly until later in the year he dismissed the disappointed burgesses. Denied legislative relief, some of the colonists took matters into their own hands in May and began cutting tobacco plants in Gloucester, Middlesex, and New Kent counties. While Chicheley acted decisively to suppress the riots and prevent them from spreading, the reports from Virginia understandably alarmed the Crown. On June 17, 1682, the king ordered Culpeper to return to Virginia.

Culpeper obeyed his instructions reluctantly and without haste. He sailed from England early in October and reached the colony in December 1682. His arrival coincided with a rise in tobacco prices, which largely pacified the planters. Culpeper denounced the tobacco cutters and by way of example executed two of them, although he offered pardons to all who took an oath of allegiance. With order restored, he left the colony soon after May 29, 1683, to report in person to the king. His departure violated an express order that colonial governors not leave their posts without royal permission, and the king deprived Culpeper of his office on August 16, 1683.

Culpeper submitted several petitions seeking repayment for various expenses he had incurred as governor. He continued to speculate in colonial lands and in 1685 purchased land in the Narragansett territory, an acquisition confirmed by the Crown in April 1688. In July 1688 he petitioned for a renewal of his Northern Neck grant, which James II approved in September. Despite that favor from the king, Culpeper was one of about thirty members of the House of Lords who met in December of that year to set up a provisional government after the king fled London, and he favored inviting William of Orange to assume the English throne.

Culpeper died in London on January 27, 1689. The place of his burial is not recorded. Culpeper’s widow and daughter, Katherine Culpeper, and son-in-law, Thomas Fairfax, fifth baron Fairfax of Cameron, spent a decade in court and in Parliament attempting with but partial success to regain control of property that Culpeper had alienated to his mistress and her daughters. Culpeper had settled the Northern Neck Proprietary on his legitimate daughter, and it descended to the Fairfax family following her death in 1719.