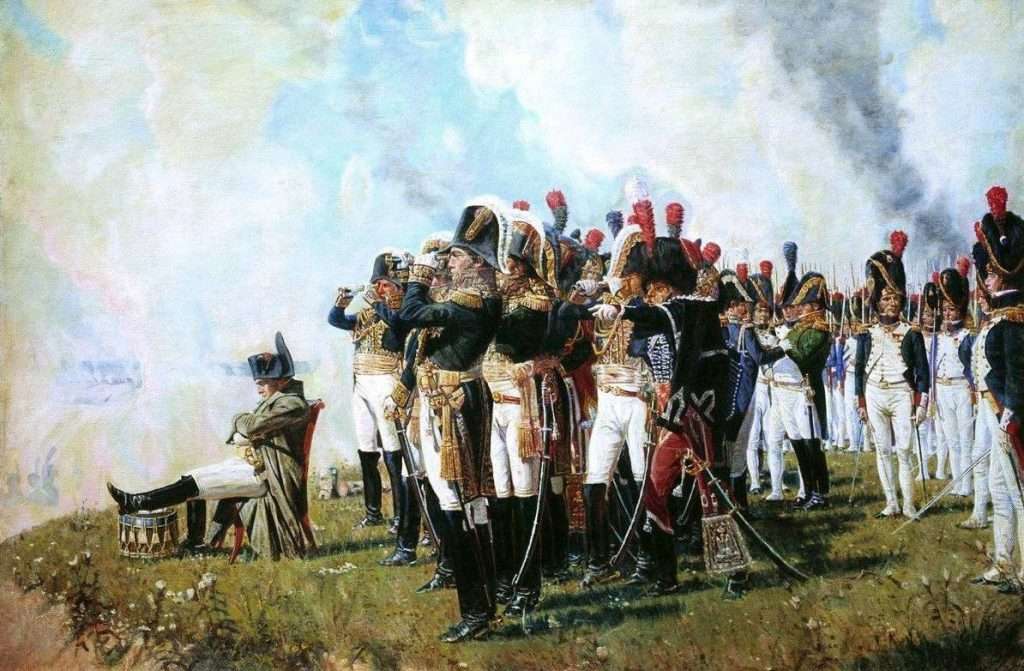 Napoleon I on the Borodino Heights

Crozet was born Claude Crozet on December 31, 1789, in Villefranche-sur-Saône, France. After his mother, Pierrette Varion Crozet, died, he and two of his siblings moved to Paris about 1800 with their father, François Crozet, a wine merchant. In 1805 Crozet secured admission to the École Polytechnique, where he received a technical education and military training. After graduating in 1807, he entered the artillery school at Metz and two years later was commissioned a second lieutenant in a combat engineers unit. During Napoléon I’s invasion of Russia in 1812, Crozet served in an artillery corps and on July 22 won promotion to captain. Taken prisoner in September of that year at the Battle of Borodino, he was released in 1814 and returned to service in the French army.

In April 1816 Crozet resigned his commission. He entered into a marriage contract with Agathe DeCamp on June 5 of that year and married in Paris two days later. Before her death on March 14, 1861, they had two daughters and one son. Soon after his marriage he immigrated to the United States and began using the name Claudius Crozet. He started teaching at the U.S. Military Academy, at West Point, New York, in the autumn of 1816. Taking his place alongside several other French émigrés on the faculty, Crozet added to the curriculum his expertise in the science of artillery and developed courses in geometry. He published a textbook entitled A Treatise on Descriptive Geometry: For the Use of the Cadets of the United States Military Academy (1821). Despite his academic success, Crozet feuded with administrators and in 1821 sought without success a position at the University of Virginia, which had not yet opened. He finally left West Point in 1823 to become principal engineer for the Virginia Board of Public Works, effective on June 2 of that year.

Engineering and the Crozet Tunnel

Although the Board of Public Works had existed for seven years, by the time of Crozet’s appointment its program of supporting private internal improvement projects had yet to reap many economic benefits for the state. The directors immediately charged their new principal engineer with the tasks of aiding in surveying small-scale projects and examining the feasibility of a statewide route linking the Ohio River and Tidewater Virginia. During the summer of 1825 Crozet undertook a detailed survey of western Virginia, and over the next few years he strongly urged the General Assembly to authorize construction of a transportation system comparable to New York’s Erie Canal. At first he recommended extending the existing water route along the James River across the state to the Kanawha River, but he soon began advocating a railroad as the most efficient and cost-effective means of linking the Ohio River with the Chesapeake Bay.

Crozet found, however, that sectional interests rendered members of the General Assembly unsympathetic to a centralized statewide plan of internal improvements. The shortsighted goals of local politicians consistently frustrated the forward-looking engineer, who believed that such improvements would make Virginia the most important state in the country. In 1831 the assembly cut the principal engineer’s salary and refused to act on his plans for a state-funded railroad in western Virginia. In response to these difficulties, made worse by the death of his elder daughter the year before, Crozet resigned. 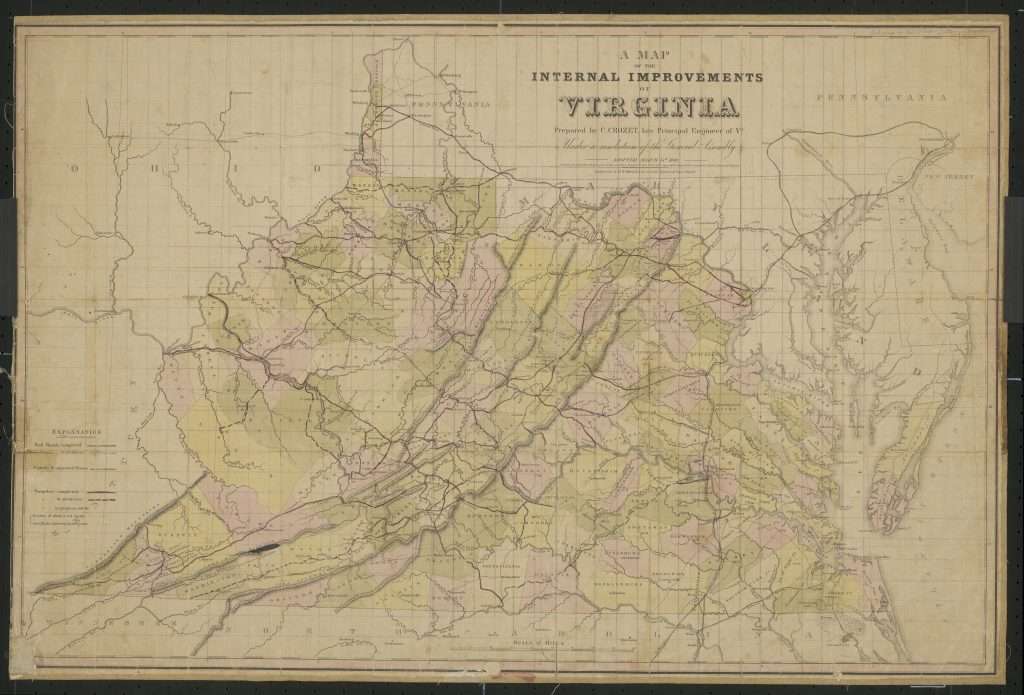 A Map of the Internal Improvements of Virginia

Crozet’s expertise in internal improvements and his French background led him to Louisiana, where he became the state engineer in 1832. He found the politics there just as complicated as they had been in Virginia, and in 1834 he resigned in order to accept the presidency of Jefferson College, a preparatory school in Saint James Parish. Two years later Crozet left to become a civil engineer with the city of New Orleans, but after briefly struggling with the city’s drainage problems he decided to leave Louisiana altogether. This restlessness was typical of Crozet, whom contemporaries frequently described as irritable, intolerant of anyone who disagreed with him, and unpopular. Despite his difficult personality, on April 5, 1837, the Virginia Board of Public Works rehired him as principal engineer. The General Assembly eliminated the office in March 1843. Five years later on order of the assembly Crozet prepared a lithographic map of internal improvements and an accompanying brief history entitled Outline of the Improvements in the State of Virginia (1848).

From 1837 to 1845 Crozet served as the first president of the board of directors of the Virginia Military Institute, which opened in Lexington in 1839. Using his own formal military training he helped install a curriculum patterned after his experiences at the École Polytechnique and at the U.S. Military Academy. He worked from 1845 to 1849 as principal of the financially plagued Richmond Academy. In 1848 Crozet published An Arithmetic for Colleges and Schools, which appeared in two subsequent editions. He also wrote another textbook, First Lessons in Arithmetic: Being an Introduction to the Complete Treatise for Schools and Colleges (1857).

In 1849 Crozet embarked on the work that earned him a national reputation as the chief engineer for the Blue Ridge Railroad Company (later part of the Chesapeake and Ohio Railroad Company). On the planned railroad route extending from Charlottesville to Staunton, he tested many of his ideas concerning the construction of railroad tunnels through mountainous terrain. In an era when tunneling through solid mountain rock was considered prohibitively expensive, Crozet proposed four manually drilled single-track tunnels through the Blue Ridge Mountains ranging from 100 to more than 4,200 feet in length at a cost of about $803,000. Construction took eight years. The longest tunnel, located at Rockfish Gap and usually designated the Crozet Tunnel, opened in April 1858. The expense and large-scale coordination required inflamed Crozet’s testy personality, which was exacerbated by the death of his son in April 1855. 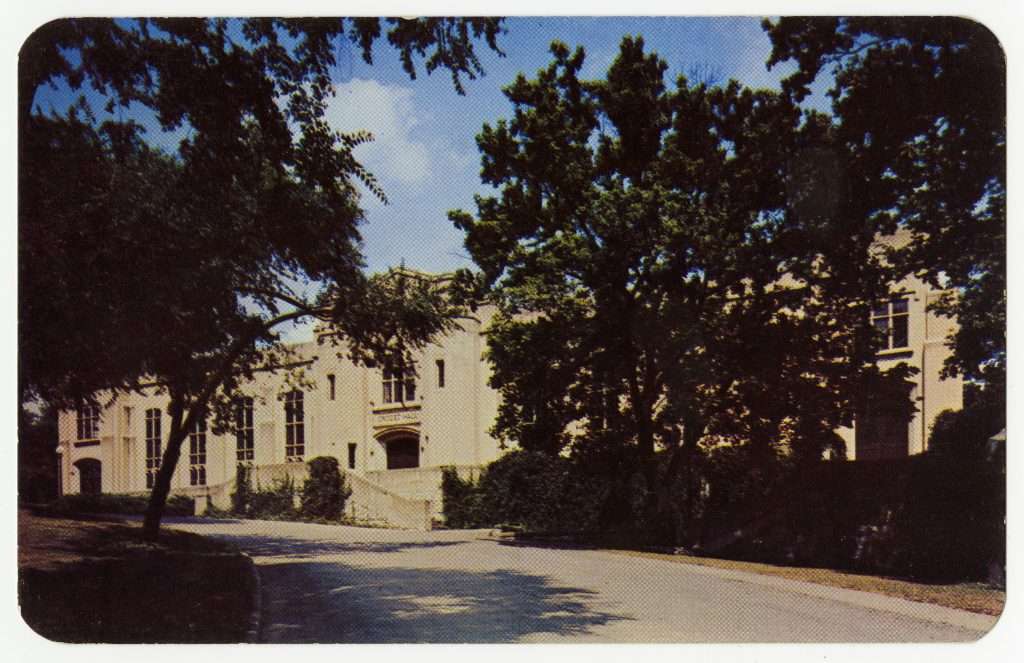 In 1857 Crozet became the principal assistant engineer in charge of building an aqueduct to secure a fresh water supply for Washington, D.C. His position was eliminated in July 1859, and the next year he became the chief engineer of the Virginia and Kentucky Railroad. Sectional tensions complicated work on this rail line, and construction stopped when Kentucky did not secede from the Union. Crozet died at his son-in-law’s home in Chesterfield County on January 29, 1864. Initially buried in an unmarked grave in Richmond’s Shockoe Cemetery, his body was reinterred in 1942 on the grounds of the Virginia Military Institute. The Albemarle County town of Crozet and the VMI mess hall bear his name. The Richmond residence where he lived from 1828 to 1832 was added to the Virginia Landmarks Register and the National Register of Historic Places in 1971 and 1972, respectively.