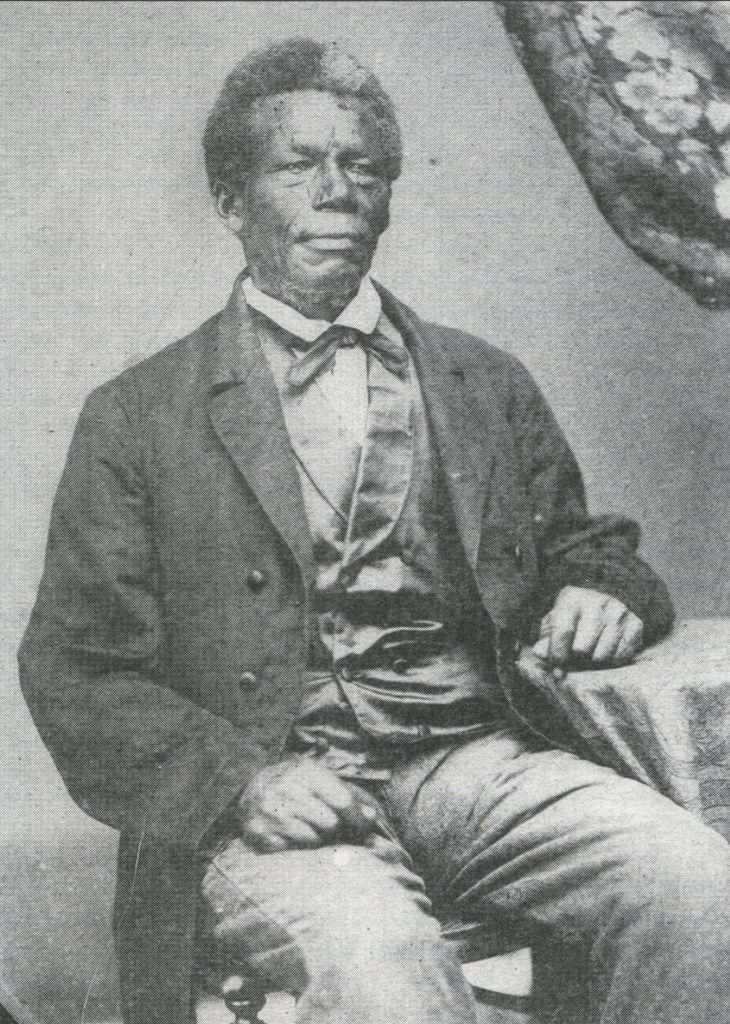 Cromwell was born on September 5, 1846, in Portsmouth. His parents, Willis Hodges Cromwell and Elizabeth Carney Cromwell, were both slaves. Yeates’s Free School, located in Nansemond County, owned his father but permitted him to live in Portsmouth, where he worked as a carpenter and transported freight aboard his small sloop. In a scenario probably devised by Willis Cromwell, in January 1849 B. W. Dobson purchased Elizabeth Cromwell from Thomas Twine, of Elizabeth City County. Evidently Dobson set her free, because in that same month, most likely with her husband’s earnings, she paid $2,950 to Twine for their seven children, ranging in age from almost two and a half years old to twenty-five. In July 1850 she paid $300 for her husband and in June of the next year put her mark on documents that freed him and their children. Once free, the family settled in Philadelphia. John Wesley Cromwell attended grade school there until 1856, when he enrolled at the Institute for Colored Youth, a Quaker school that included instruction in the classical languages, history, and mathematics.

After graduating in 1864 with a cash prize for superiority in Greek and Latin studies, Cromwell took a teaching job in Columbia, Pennsylvania. That school soon closed, however, and from the spring of 1865 until the end of the year he operated a private school in Portsmouth. The Baltimore Association for the Moral and Educational Improvement of the Colored People then employed him, but Cromwell’s stay in Maryland was cut short in March 1866, when someone fired a gun at him and unknown persons burned down the church in which he held school. He returned to Portsmouth, where he taught Sunday school at the Emanuel African Methodist Episcopal Church. Believing strongly in the importance of education for African Americans, Cromwell declared that he desired “to assist in the elevation of my own down-trodden, unfortunate, illiterate yet not God-forsaken people.” In the autumn of 1866 the American Missionary Association hired him as a teacher at Providence Church, in Norfolk County. The school closed in June 1867, and for a time he was an agent for the Society of Friends.

In 1867 Cromwell may have attended the Republican Party‘s first and second state conventions held in Richmond, although his name does not appear on the official lists of delegates. Later he was an organizer for the Republican Party and for the Philadelphia-based Union League Association. Returning to the classroom, he taught in Wytheville during the winter of 1869–1870, in Richmond the following year, and in Southampton County during the summer of 1871.

Cromwell entered Howard University’s law school in the autumn of 1871 and three years later graduated and was admitted to the bar. Having in the meantime passed the civil service examination in 1872 and become a clerk at the Treasury Department, he rose through the ranks to become chief examiner of the money order department. Later he worked in the auditor’s office of the post office department until June 30, 1885, when he was dismissed, probably for political reasons, soon after a Democrat became president.

After leaving the Treasury Department, Cromwell practiced law. When he appeared before the Interstate Commerce Commission as counsel for the plaintiff in William H. Heard v. the Georgia Railroad Company in December 1887, he was likely the first African American attorney to argue a case before that new body. Cromwell resumed his career in education in September 1889 and taught or served as principal at several District of Columbia schools until at least 1919. In 1914 he received an honorary degree from Wilberforce University, in Ohio. 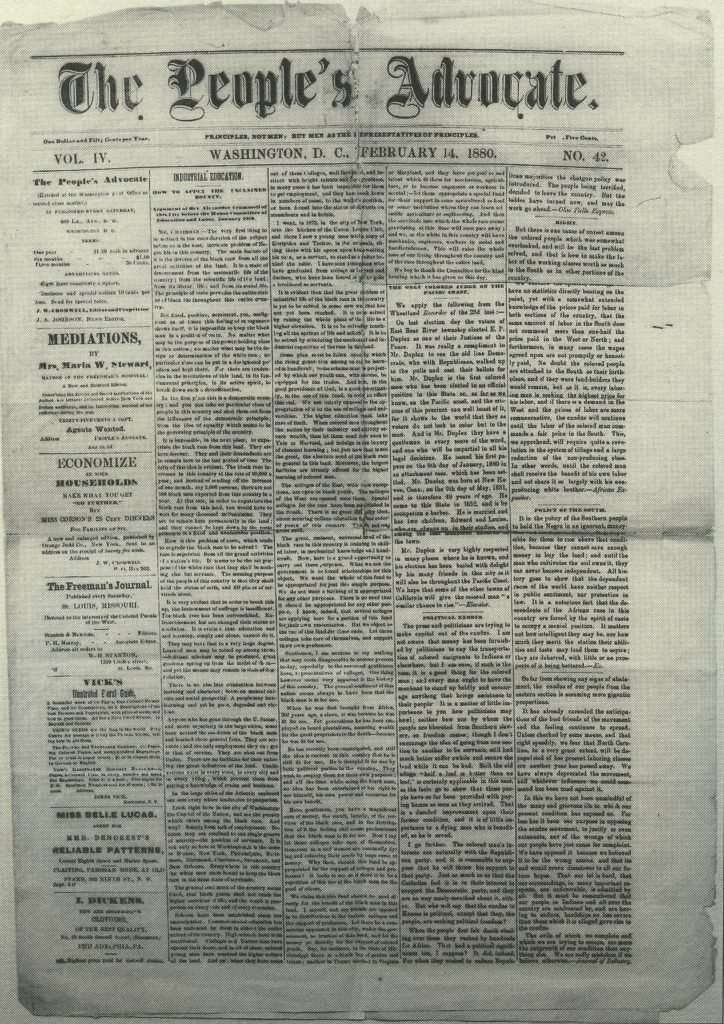 While working for the federal government and studying for his law degree, Cromwell continued strong advocacy of African American education. At a Richmond meeting of the Virginia Educational and Literary Association late in August 1875, he was elected second vice president and delivered a keynote speech before the convention, later published as an Address on the Difficulties of the Colored Youth, In Obtaining an Education in the Virginias (1875). Cromwell also chaired the convention’s Committee on Organization, which created the Virginia Educational and Historical Association, and was named president of the new organization.

In April 1876 Cromwell published the inaugural issue of the People’s Advocate in Alexandria. By 1878 he had moved the weekly newspaper to Washington, D.C., where its pages continued to reflect his concerns about racial issues and the importance of studying history and literature. Cromwell remained proprietor and managing editor at least through the spring of 1884, when he wrote a history of area black churches that ran in three installments. In 1880 he was a key figure in founding the National Colored Press Association (after 1894 the National Afro-American Press Association).

A gifted organizer, Cromwell in 1877 helped found the short-lived Negro American Society. In 1881 he helped establish the Bethel Literary and Historical Association, whose meetings attracted Frederick Douglass and other leading black scholars and activists. Cromwell served on its advisory board, sat on the executive committee, and in 1886 and 1887 was elected president. To commemorate its fifteenth anniversary he wrote the History of the Bethel Literary and Historical Association (1896). During this period Cromwell was elected an honorary member of the Philosophian Literary Society of Lincoln University. He sat on the board of the Progressive Co-operative Society, was an officer in the Mutual Benefit Association, and represented the District of Columbia at the World’s Industrial and Cotton Centennial Exposition, which opened in New Orleans in December 1884.

A staunch supporter of industrial and agricultural education, Cromwell in 1879 was president of the Banneker Industrial Education Association. In May of that year he attended the Nashville meeting of the National Conference of Colored Men of the United States, was elected its secretary, and chaired the Committee on Education and Labor. Cromwell’s essay in the Southern Workman entitled “The Chance for Skilled Negro Labor in the South” (1897) hailed the new trade school at Hampton Normal and Agricultural Institute (later Hampton University) as a forerunner of educational institutions that would boost black participation in the region’s industrial development. He attended the inaugural meeting of the Hampton Negro Conference in 1897 and continued to serve on its various committees until at least 1903. Cromwell initially supported Booker T. Washington‘s vision of black education and defended him against critics at a meeting of the Bethel Literary and Historical Association in 1895. Cromwell’s support of Washington waned, however, as Cromwell came to believe that African American leaders should subordinate the quest for education and material success to seeking political solutions to racial problems.

Cromwell played a key role in founding the American Negro Academy (ANA), and at its organizational meeting on March 5, 1897, he was elected corresponding secretary, an office he held until 1919. As a member of the executive committee between 1898 and 1903, he emerged as a dominant force and became the public face of the ANA. Elected the academy’s fourth president in 1919, Cromwell made strong efforts to revitalize the organization. He chose not to seek reelection the following year, probably because of his age. During the absences of his successor, Arthur Alfonso Schomburg, Cromwell conducted association business as a member and occasional chair of the executive committee. 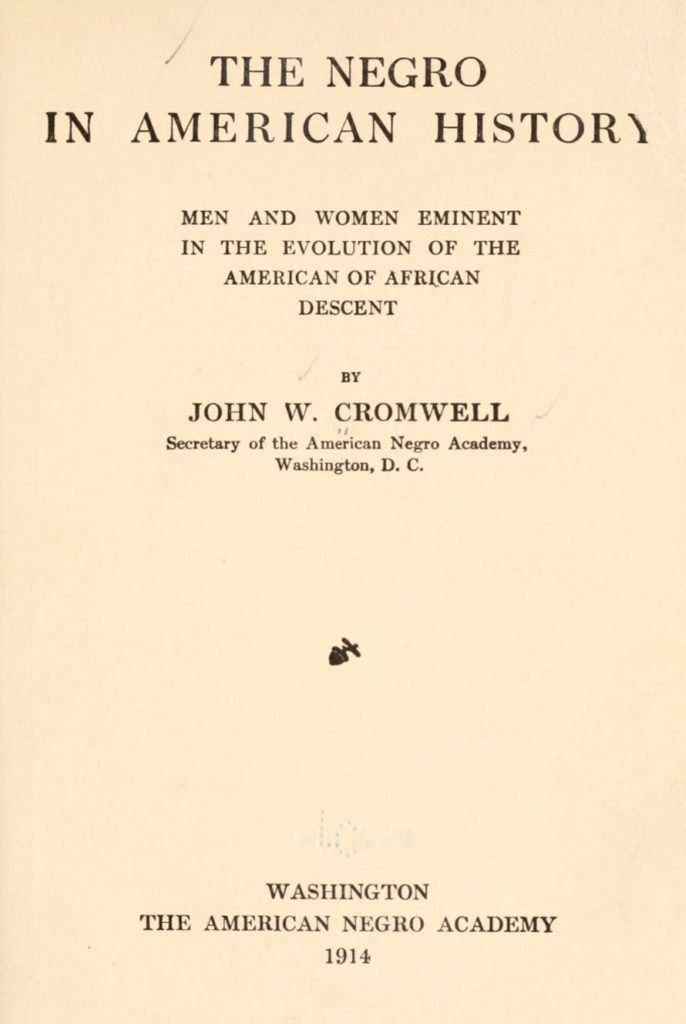 The Negro in American History

Desiring to promote the work of black scholars, Cromwell in 1910 helped establish the American Negro Monograph Company. The enterprise published four papers during its eleven months in business. His interest in book collecting led to an association with other bibliophiles, including Schomburg, with whom he corresponded frequently between 1912 and 1926. In 1915 the two men helped organize the Negro Book Collectors Exchange, with Cromwell as vice president. Throughout his career Cromwell wrote on educational and historical subjects, including The Early Negro Convention Movement and The Jim Crow Negro (both 1904), The Negro in American History: Men and Women Eminent in the Evolution of the American of African Descent (1914), The Challenge of the Disfranchised: A Plea for the Enforcement of the 15th Amendment (1924), and articles for the Journal of Negro History entitled “The Aftermath of Nat Turner’s Insurrection” (1920) and “The First Negro Churches in the District of Columbia” (1922), a revised version of his history of black churches.

On November 13, 1873, Cromwell married Lucy A. McGuinn in Washington, D.C. They had five daughters and two sons, one of whom died in infancy. His wife died on April 6, 1887, and on October 20, 1892, he married Annie E. Conn in Cumberland County, Pennsylvania. They had no children. Cromwell died at his Washington residence on April 14, 1927, and was buried in Woodlawn Cemetery in the District of Columbia.