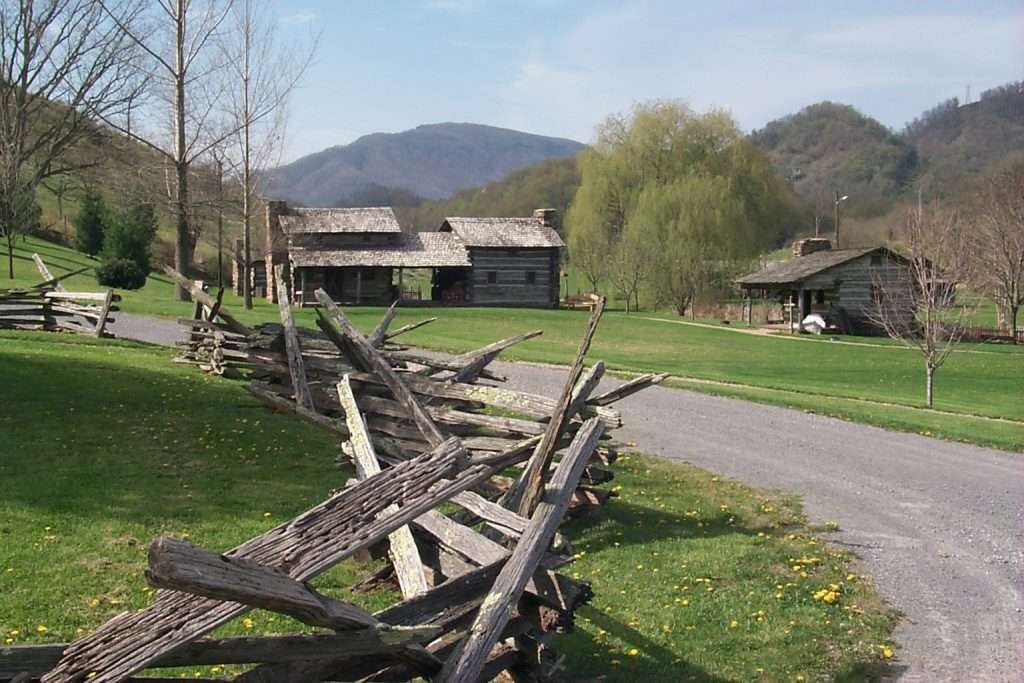 Captain R. D. Wainwright, a retired U.S. Army officer and amateur archaeologist, first reported the Crab Orchard site in a letter to the Smithsonian Institution, dated August 5, 1914: “… visited Pisgah, Virginia. Found in front of the only church, just across the road, a large area, some 240 feet in width, by measurement, on which was an old Indian town, in the old days. The ground is discolored, blackish, and is covered with periwinkle shells, broken pottery and flaking of black flint in great profusion. Flaking of flint extend some distance outside of colored ground. Many articles of Indian manufacture have been found there.” Today, much of Crab Orchard remains well preserved and is part of the Historic Crab Orchard Museum and Pioneer Park, where one may find exhibits on the site in the museum. 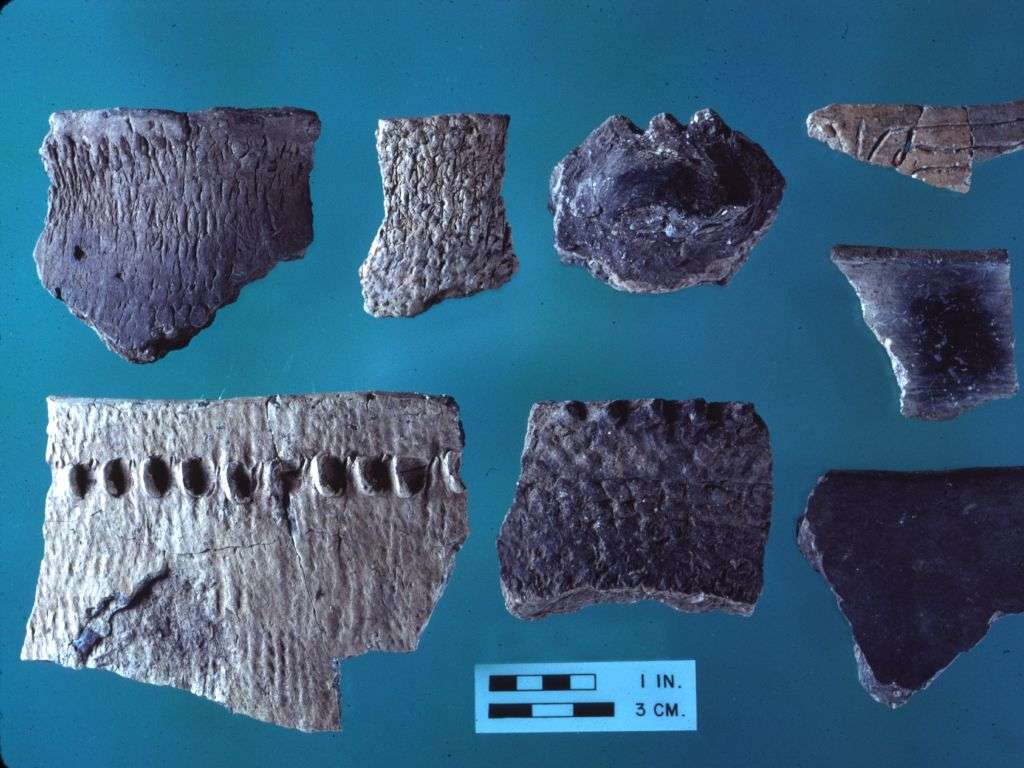 In 1971, the site lay in the path of the proposed Route 632, prompting Howard A. MacCord, of the Virginia State Library, to examine a 500-by-90-foot strip through the center of town, as well as areas on the northern and southern edges of the town. In May 1978, a proposed social service building prompted a second investigation, this time by the Virginia Research Center for Archaeology; later in June, the Tazewell County Board decided not to pursue construction of the building, ending the still-incomplete investigation. Much of the site remains unexcavated.

Investigators discovered, as Wainwright thought they might, evidence of a Virginia Indian town. In particular, they found three concentric palisades with a diameter of 400 feet, inside of which were fourteen circular house patterns with hearths, more than 195 storage pits, and, mostly between the homes and the town walls, more than 175 human burials. Investigators also identified a semi-subterranean structure outside the palisades. In addition, they unearthed ceramics, mostly Radford Ware but also New River and Wythe wares, along with lithic artifacts and small black cannel coal pendants and beads made from copper, marine shell, and bird bone. 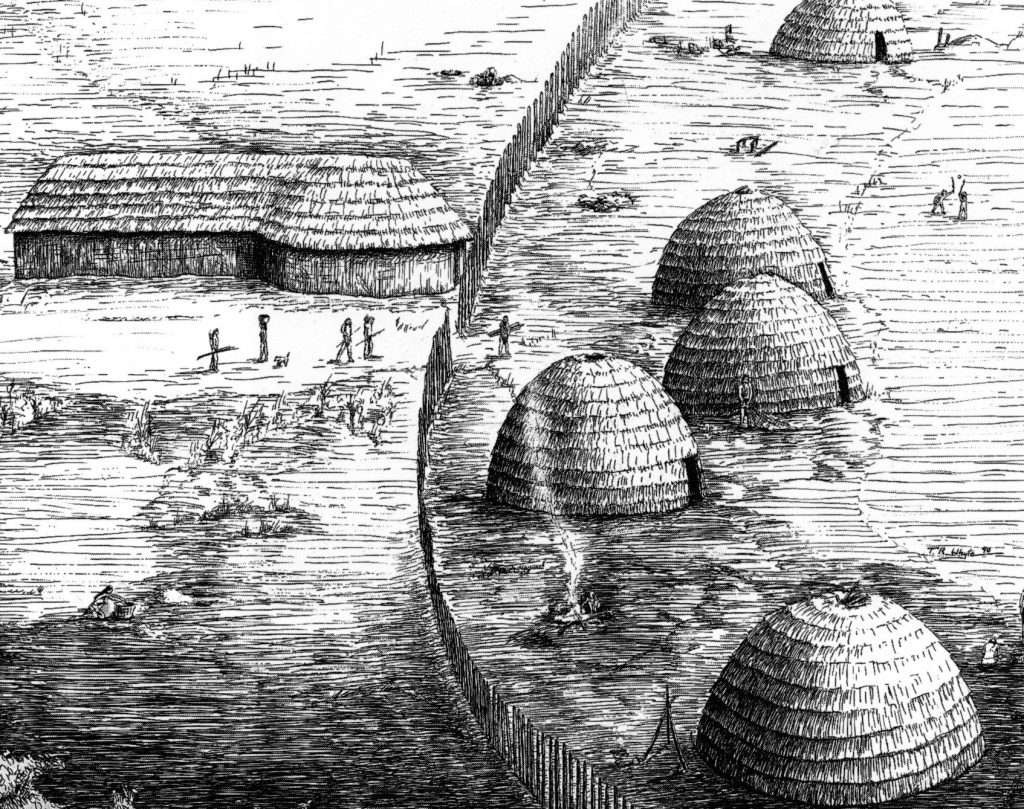 The town’s houses were built five to fifteen feet inside the palisade and spaced closely together, with only enough room to walk between them. Circular and with an average diameter of twenty-five feet, they appear to have been supported by exterior and interior posts; other post molds suggest room divisions, vestibule entrances facing the town center, and wall reinforcement. Houses also contained evidence of central hearths, infant burials, and storage pits. The pits were typically small and cylindrical (two feet wide, one foot deep); a basket-shaped pit contained two inches of pebbles at the bottom, presumably to facilitate drainage. A large bell-shaped pit was found that appeared to be lined with a woven matting. Due to the absence of clay plaster, or “daub,” the houses were likely covered with mats, bark, or thatch.

The semi-subterranean structure, located outside the town’s walls, measures sixty-four feet long, east to west; its width varies from thirty-nine feet on its east side to thirty feet on its west side. The floor lies approximately two feet below ground. Besides a central hearth, the building seems to have featured a clay bench along the inner wall. That and the structure’s large size suggest that it served a special purpose, perhaps as a public meeting house for either secular or sacred activities. Meanwhile, several large storage pits were uncovered outside the structure, including one that may have had a wooden floor.

The Virginia Indian town at the Crab Orchard Archaeological Site likely was built between AD 1400 and 1600, although the first palisaded towns in the area appeared as early as around AD 1200. The remains of three concentric palisades suggest that the wall was built three times—the houses, too, showed signs of being rebuilt—marking this spot as a long-term settlement. It is unclear, however, what the palisades around this southwestern Virginia town meant, having been constructed for possibly protection or perhaps to recognize or symbolize an important leader or chief residing in the town. Most towns, permanent or impermanent, were located on waterways, such as, in this case, the Clinch River. And evidence gathered from around Virginia suggests that even permanent towns moved every twenty years or so.

Throughout Virginia, it was rare for town populations to exceed a couple hundred people. However, there were some fifty houses at Crab Orchard, and each house likely was home to six to ten people, giving the town a population of about 400. It is unclear why Crab Orchard was so large with possible explanations being that this size was due to the town being especially prestigious or located in a particularly dangerous area.