Earnest Sevier Cox was born on January 24, 1880, near Knoxville, in Blount County, Tennessee, and was the son of Ann Maria Earnest Cox Cox and her second husband, Samuel Thompson Cox (who was the brother of her first husband). His father, a farmer and sometime Methodist preacher, died when Cox was about twelve years old. Cox attended private schools in Blount County. After receiving a BS in 1899 from Roane College, an unaccredited Tennessee institution, he spent time in Georgia, Louisiana, and Oklahoma. Cox took a business course, considered studying law, and worked as a schoolteacher, loan officer, and reporter. In 1902 he enrolled in the Moody Bible Institute in Chicago, where he trained as a public speaker and street-corner preacher. A year later, he moved to Nashville and continued his theological education at Vanderbilt University. Although Cox soon found his own fundamentalism at odds with the teachings of the faculty, he remained at Vanderbilt for three years and devoted all available time to preaching. He was forced to rethink his career aspirations when a chronically sore throat prevented him from earning steady income as a preacher.

After leaving Vanderbilt in 1906 without a degree, Cox enrolled in the graduate course in sociology at the University of Chicago. As a result of the coursework he had completed at Roane and at Vanderbilt, the University of Chicago determined that he had earned the equivalent of a bachelor’s degree. During his three years at Chicago, Cox began to articulate racial views that consumed him for the remainder of his life. He fervently believed in the inferiority of the black race, an assumption held by many other whites at the time, but he also insisted that whites and blacks could not coexist. The only solution, he concluded, was the removal of blacks from white society.

During the summers of 1907, 1908, and 1909 Cox traveled to Chicago, Norfolk, and Pittsburgh giving lectures that accompanied the presentation of cycloramas, panoramic paintings with biblical and Civil War themes. He left the University of Chicago in 1909, again without a degree. Encouraged by a Chicago professor, he decided to visit Africa in order to compare the living conditions of blacks in Africa and in the United States and also the racial policies of colonial powers in Africa with those developed by authorities in the United States. Setting sail in February 1910, Cox began a five-year trip that enabled him, in subsequent decades, to present himself as an ethnographer and expert in racial matters. Earning money along the way by working in the South African gold and diamond mines, he traveled from Cape Town to Cairo and then to Australia, New Zealand, Hong Kong, Singapore, and the Philippines. After a brief respite in the United States, Cox continued his travels in Central and South America. He returned to the United States in 1915 and began supporting himself by lecturing and writing newspaper articles on his travels.

After spending about six months in Alexandria, Virginia, Cox in 1917 joined the United States Army and earned promotion to captain. A year later his commanding officer in France found him unfit to serve on the front lines because Cox’s subordinates refused to take orders from him. Removed to the support lines, Cox nevertheless received an honorable discharge in September 1919. He subsequently entered the reserves and rose to the rank of major in 1920 and lieutenant colonel in 1929. 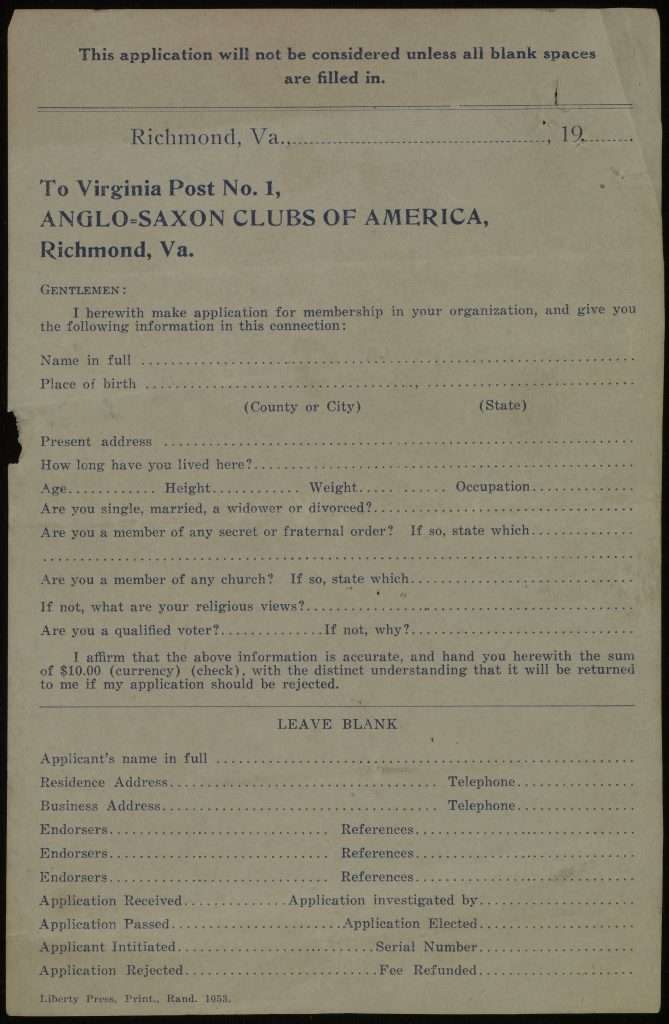 In January 1920 Cox moved to Richmond, where he began selling real estate. Before long, he fell in with John Powell, a Richmond native, University of Virginia professor, and world-renowned composer and pianist who shared Cox’s extreme racial views. In September 1922 Cox and Powell founded the Anglo-Saxon Clubs of America. The organization, headquartered in Richmond, eventually encompassed more than two dozen chapters in Virginia and also included several in northern states. Deriving intellectual sanction from the burgeoning eugenics movement, Cox and Powell warned that an increase in miscegenation threatened to destroy white civilization by wiping out all its desirable, racially exclusive traits and characteristics. Cox cited Egypt, South Africa, and other countries that he had visited as evidence that interracial mixing always led to the destruction of the superior race. Consequently, the pair asserted that white Americans must enforce a rigid color line. To that end, Cox and Powell led a vocal band of supporters who in 1924 convinced the General Assembly to pass the Virginia Act to Preserve Racial Integrity, probably the nation’s strictest anti-miscegenation statute. Two years later, the legislature, again acting at Cox and Powell’s urging, passed the so-called Massenburg Bill, a measure sponsored by Delegate George Alvin Massenburg that mandated the separation of the races in all places of public assemblage.

By the time Cox testified before the General Assembly on behalf of the Racial Integrity Act, he had become a local celebrity with the publication of White America (1923). Based entirely on Cox’s own travels and observations, White America developed the thesis that white civilizations could not survive an influx of nonwhites. Cox concluded that whites were faced with two choices: amalgamate and eventually cease to exist, or separate completely. Although hardly novel at the time in warning of the dangers of interracial mixing, Cox went a step further than most of his contemporaries and argued that effective separation would occur only when black Americans had been repatriated to Africa. He reiterated White America‘s central themes in subsequent books, pamphlets, and broadsides, including The South’s Part in Mongrelizing the Nation (1926), Lincoln’s Negro Policy (1938), Three Million Negroes Thank the State of Virginia (1940), Teutonic Unity (1951), Unending Hate: Supreme Court School Decision a Milestone in the Federal Program to Break the Will of the White South in Its Dedicated Purpose to Remain White (1955), and Herman’s Brother, a speech published in The Monument to Herman: Whom the Romans Called “Arminius” (1959). 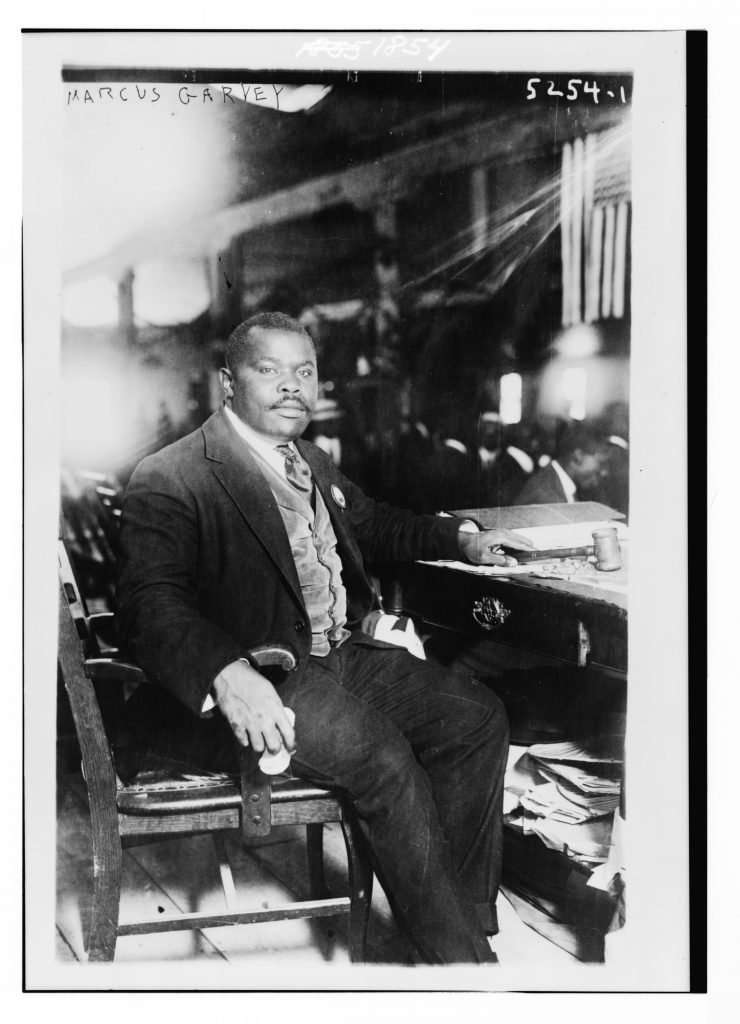 In September 1924 Cox entered into an unlikely alliance with Marcus Garvey, the Jamaican-born black nationalist who founded the Universal Negro Improvement Association. Garvey’s black nationalism stood in stark contrast to Cox’s racial views, but Garvey nonetheless shared Cox’s belief that the repatriation of blacks to Africa offered the only viable solution to the nation’s racial issues. For his part, Garvey had concluded that blacks would never receive a fair chance in the United States and thus must leave. Cox wrote an open letter read at a UNIA meeting and dedicated his booklet Let My People Go (1925) to Garvey. The partnership between Cox and Garvey ended in 1927 when federal authorities deported Garvey after his conviction for mail fraud.

Cox then formed an alliance of convenience with the Peace Movement of Ethiopia, a little-known African American group, based in Chicago, that advocated federal assistance for the repatriation of blacks to Africa. In 1936 he prevailed on the General Assembly to recommend that the federal government provide such funds. Cox and the PME soon joined forces with Theodore Gilmore Bilbo, a United States senator and unapologetic racist from Mississippi, who introduced legislation to provide federal funds for repatriation. Bilbo’s bill unmistakably bore the influence of White America. For nearly a decade Bilbo reintroduced his bill while Cox urged the senator to temper his language in order to ensure the support of both blacks and whites. After Bilbo’s death in 1947, Senator William Langer, of North Dakota, repeatedly sponsored similar legislation, and on at least two occasions Cox testified before congressional committees as an expert on the subject. Langer’s death in 1959 signaled the end of congressional attempts to introduce such legislation.

In 1958 Cox retired from the real estate business that had provided him a modest income. He published Black Belt around the World at the High Noon of Colonialism (1963), an autobiographical account of his early life and travels in the 1910s, and sent copies to every member of Congress and to prominent federal officeholders. In his later years he remained popular in white supremacist circles. Earnest Sevier Cox, who never married, died in a Richmond hospital from complications related to emphysema on April 26, 1966, and was buried in Arlington National Cemetery two days later.