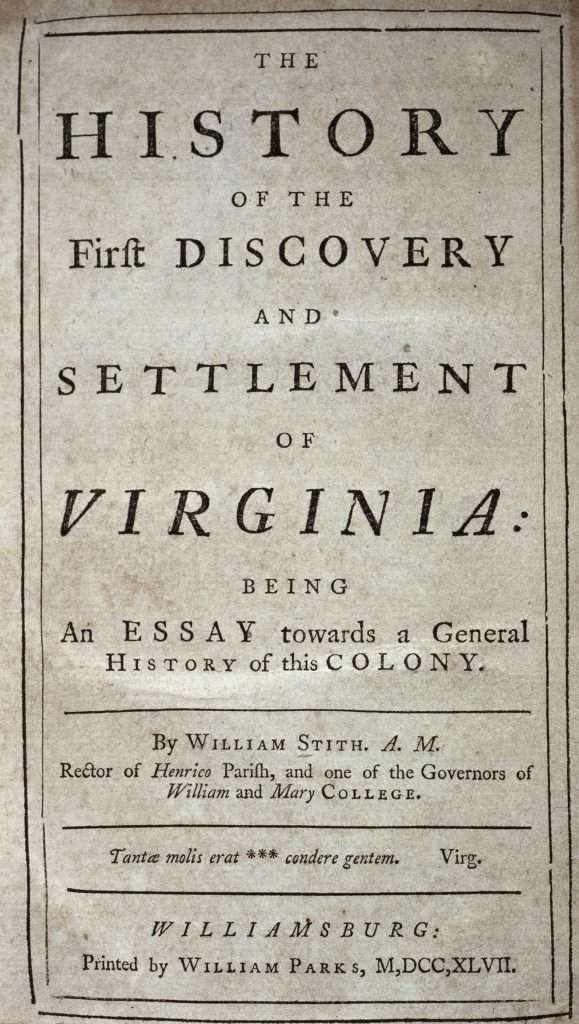 The History of the First Discovery and Settlement of Virginia

Under the military government instituted by Sir Thomas Dale after he arrived in Virginia in May 1611, military commanders were responsible for civil administration and local defense in the old and new Virginia settlements. Dale established at least five settlements by early in the 1610s, located from the present-day Richmond area to the Eastern Shore. Because no ecclesiastical courts existed in the colony, the governor and his Council proved and recorded wills and settled the estates of people who died. They also tried criminals and attended to all other business conducted by the various courts in England. By 1622, however, the population of the colony had grown to such an extent that early in the year, as the early American historian William Stith wrote in The History of the First Discovery and Settlement of Virginia (1747), “Inferior Courts were … appointed in convenient Places, to relieve the Governor and Council from [their] vast Burthen of Business, and to render Justice the more cheap and accessible.” Stith goes on to say that although Virginia’s populated areas had not yet been divided into counties (because they were not “considerable” enough), the inferior courts were the precursor to county courts.

Thus by 1622 several settlements in Virginia were governed locally by courts composed of commissioners of the peace (later known as justices of the peace). These courts met, usually monthly, to issue licenses to marry and to keep taverns and ordinaries. Because service on these courts enhanced one’s reputation, it became the logical stepping stone for those who wished to serve in the House of Burgesses, the lower house (after 1643 when they began to meet separately from the upper house) of the Virginia General Assembly.

But on March 22, 1622, not long after these courts had been created, a group of Powhatan Indians led by Opechancanough attacked and killed more than 300 colonists throughout the Virginia settlements located away from Jamestown. In response, Governor Sir Francis Wyatt established a military command of the settlements, and the commanders set up a quasi-military structure over the civilian population by using monthly courts. The commanders provided day-to-day local civil administration and often became burgesses or members of the governor’s Council. In turn, prominent planters became militia officers. According to the historian Jon Kukla, as the line between the military and civilian populations blurred, and after the bankrupt Virginia Company of London collapsed in 1624, these commanders also “became ‘guardians’ for the property and servants owned by the late company.” In addition, they had control over all of the important matters of local administration: “land patents, indentured servants, the prices of domestic and imported commodities, the militia, Indian affairs, and the colony’s gunpowder.”

In the September 1632 session, the General Assembly passed an act that declared, “Accordinge to the former orders of the Assembly, the fift[h] of March, 1632, It is now thought fitt and accordinglie ordered, That the mounthlie corts be held and kept in remote parts of this colony, vizt. for the upper parts, Warwicke river, Warrosquyoke, Elizabeth Citty, and Accawmacke.” In 1634, according to the clerk Richard Hickman’s notes, lieutenants were added to the monthly court structure especially “to take care of the warr against Indians” and thereby reinforce the military command authorities. That same year, according to the first volume of William Waller Hening’s Statutes at Large (1809–1823), a collection of Virginia’s colonial laws, “The country divided into 8 shires, which are to [be] governed as the shires in England. The names of the shires are, James City, Henrico, Charles City, Elizabeth Citty, Warwick River, Warrosquyoake, Charles River, [and] Accawmack.” (Of those eight counties, four are still known by their original names: James City, Henrico, Charles City, and Accawmack, which now consists of the counties of Accomack and Northampton. Of the other four, Elizabeth City is now the city of Hampton; Warwick River the city of Newport News; Warrosquyoake the county of Isle of Wight; and Charles River is York County.) 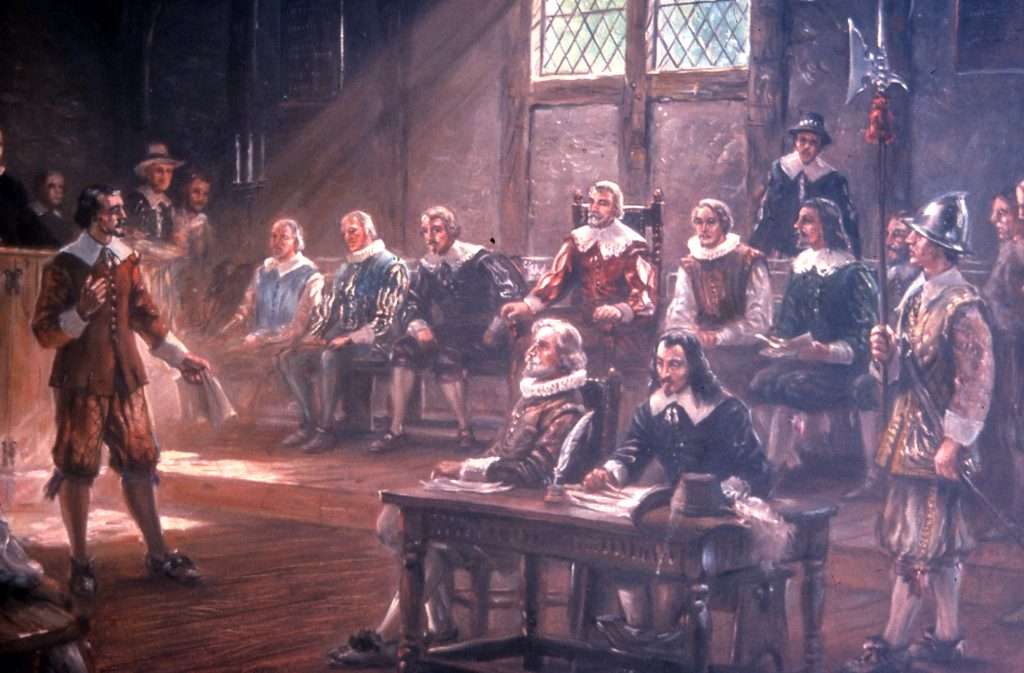 When the General Assembly first met in July 1619 eleven settlements sent representatives. The next extant list of representatives is from 1624, when sixteen settlements sent burgesses. The names of five of the future shires appear on this list: Charles City, Elizabeth City, Henrico, James City, and “Warraskoyack” (Warrosquyoake). Warwick River appears for the first time on the 1629 list and “Accomac” for the first time on the 1630 compilation. The next list of burgesses from the shires (or counties) that survives with all eight original shires named is that of 1640, though by that time, the name of Warrosquyoake had been changed to Isle of Wight. The counties of Lower Norfolk and Upper Norfolk, formed from Elizabeth City County in 1637, also appear.

Because Hening’s Statutes at Large states that the colony was divided into eight shires in 1634, that year has traditionally been known as the beginning of county government in Virginia. County-style government existed in Virginia before that time, however. Kukla discovered that the statement regarding the shires was not written in 1634 as previously supposed, but in about 1722 by the clerk Richard Hickman, who was employed in the office of the secretary of the colony. At the time, Hickman was conducting research for a history of Virginia that his employer, Sir John Randolph, proposed to write, and he had consulted old records for his research. With the loss of so many early records—because of the various statehouse fires in Jamestown in the 1600s, along with the 1747 fire at the capitol in Williamsburg, the records destruction during the American Revolution (1775–1783), and the April 1865 burning of the General Court in Richmond and the records contained therein—it is not possible to reconstruct the records that Hickman viewed.

In 1641 the General Assembly passed a law requiring officers of the court to take their oaths of office before holding monthly courts. Thereafter, the county courts performed the functions as the court of record for deeds, wills, and estate settlements; they also resolved disputes over land and debts. The final piece of the puzzle concerning the formation of Virginia’s counties appears in an act of June 1642 in which the General Assembly concluded “that the … monthly courts [are] to [be] call[ed] countie courts, and the commissioners to be stiled commissioners of the countie courts.” Thereby over a twenty-year period Virginia evolved from small settlements with military commanders to counties with monthly courts and commissioners of the peace. 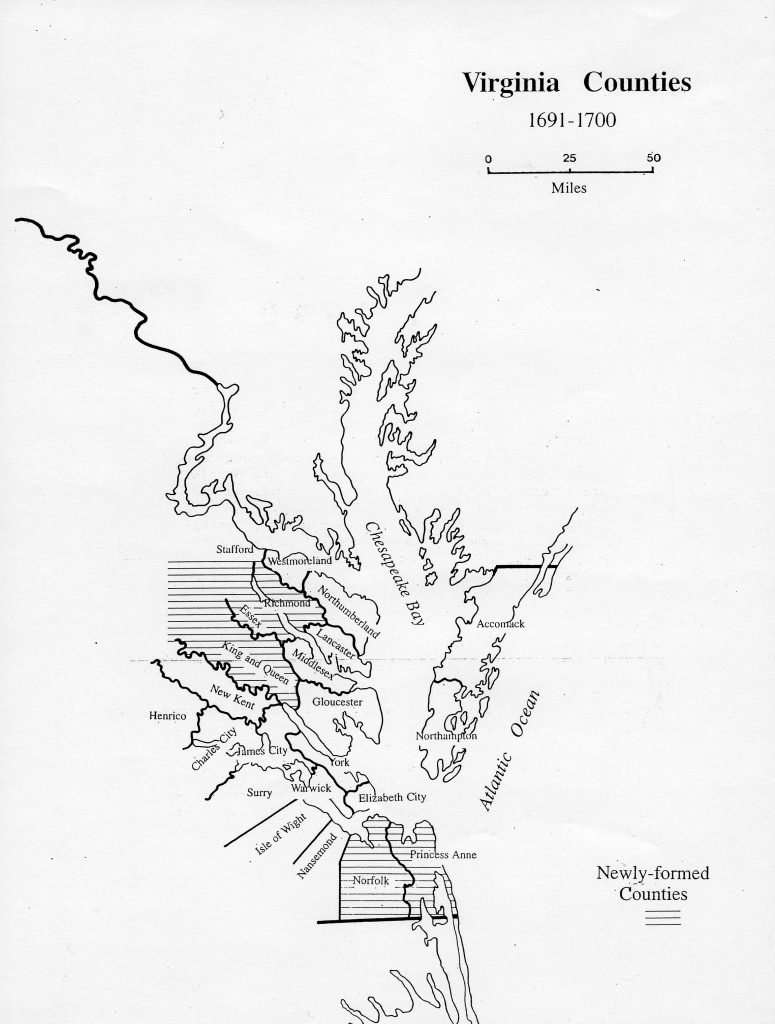 Throughout the seventeenth and eighteenth centuries Virginia’s population—and populated areas—continued to expand. For the most part, this expansion occurred for three reasons: the natural increase of the existing colonial population, immigration, and, in the words of the historian Martha W. Hiden, “the allure of new settlements where there was greater opportunity for advancement of fortunes.” The tobacco economy was also a factor, with planters looking westward for fresh, fertile land after soil depletion became a problem in the Tidewater region. As the population expanded westward, colonists found themselves farther from their county seats, which made court attendance difficult; additional counties were created to satisfy their judicial needs.

Colonists first expanded to the Northern Neck area, which by 1645 had become Northumberland County. The population in the eastern part of Virginia swelled, and more counties formed as people settled along the Tidewater rivers, so that by 1702, four of the original shires and Northumberland County had parented an additional fourteen counties. County growth was slow between 1703 and 1730, when only seven counties were formed: Spotsylvania, King George, Hanover, and Brunswick in 1720; Goochland and Caroline in 1728; and Prince William in 1730. The locations of these newly formed counties, however, show that the colonial population was growing to the north, northwest, south, and west. 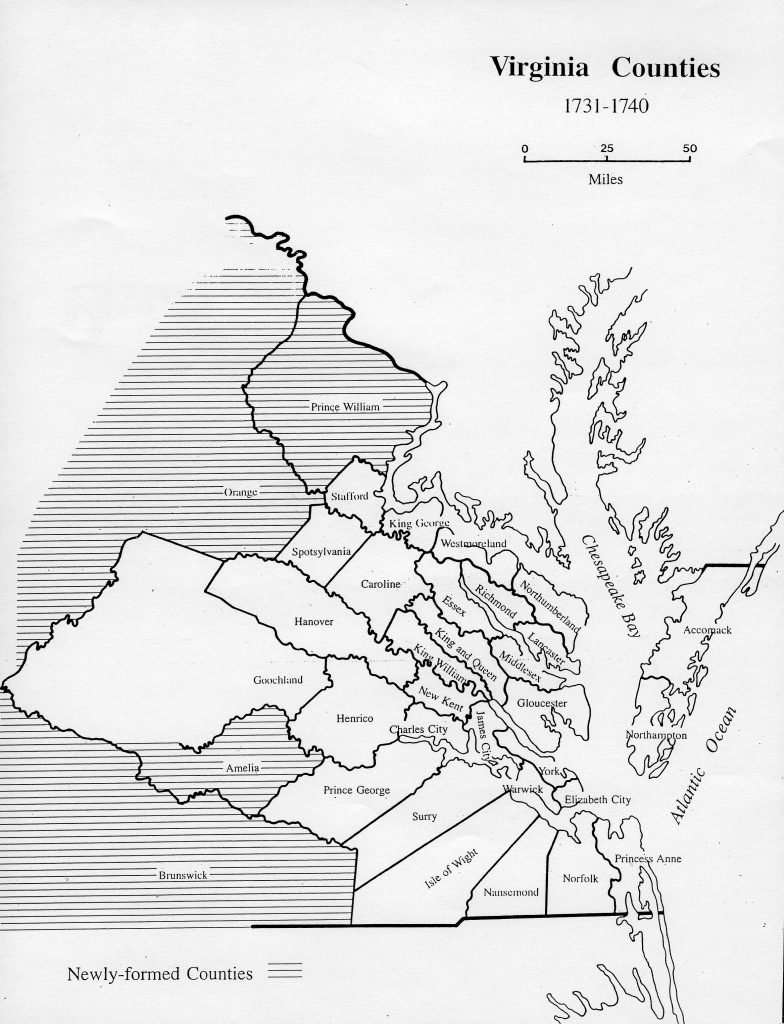 The 1730s also saw increased growth to the west and southwest, as demonstrated by the creation of Orange and Amelia counties in 1734 and Augusta and Frederick counties in 1738. (Augusta County, parent to many more western counties in the eighteenth century, did not establish a county government until 1745, when its population had grown large enough to sustain one.) More counties followed: Fairfax and Louisa counties in 1742; Albemarle County in 1744; Lunenburg County in 1745; and Chesterfield, Culpeper, Cumberland, and Southampton counties in 1749. By 1750 Virginia consisted of forty-four counties.

County growth continued in the years leading up to and during the French and Indian War (1754–1763): Halifax and Dinwiddie were established in 1752; Sussex, Prince Edward, Hampshire, and Bedford in 1753; Loudoun in 1757; Fauquier in 1759; Amherst and Buckingham in 1761; and Charlotte and Mecklenburg in 1764—an additional twelve counties. According to the Treaty of Paris, signed in 1763 to end the war, settlement to the west of the populated areas was supposed to cease, and although county growth slowed, settlements continued to move west despite the injunction. Pittsylvania County was formed in 1766, Botetourt in 1769, and Dunmore, Berkeley, and Fincastle counties in 1772, bringing the total number of Virginia counties created under the colonial government to sixty-one.

In general, the colonial government in Virginia created new counties as populations grew large enough to sustain them. This was not the case in North and South Carolina, where county formation in the west did not keep pace with population growth, leading to corruption in North Carolina and a lack of courts and law enforcement officials in South Carolina. This, in turn, contributed to the Regulator movements of the 1760s, during which colonists grew disillusioned with the government and rebelled in the hope of regulating their own affairs. In Virginia, however, residents of the Piedmont and the western part of the colony were satisfied with the rate of county formation.

In the 1770s, as Virginia stood at the threshold of independence, the colony had grown in population from 350 people in 1610 to more than 450,000, and its counties extended from the Eastern Shore to what became the state of Kentucky and from the Maryland border to the North Carolina border.

RELATED CONTENT
Categories:
MAP
TIMELINE
May 1611
Sir Thomas Dale, appointed Virginia's marshal, arrives in the colony with about 300 well-armed soldiers. He immediately issues orders to erect palisades at the James River settlements to secure them from attack.
1622
Governor Sir Francis Wyatt establishes military commanders to administer the various settlements; these commanders in turn set up monthly courts to transact official business.
Early 1622
The General Assembly passes a bill to establish lower courts in the various settlements throughout the colony to help relieve the governor and his Council from certain responsibilities.
March 22, 1622
Indians under Opechancanough unleash a series of attacks that start the Second Anglo-Powhatan War. The assault was originally planned for the fall of 1621, to coincide with the redisposition of Powhatan's bones, suggesting that the attack was to be part of the final mortuary celebration for the former chief.
September 1632
An act in the September session of the assembly establishes monthly courts in remote parts of the colony.
1634
The colony is divided into eight shires: James City, Henrico, Charles City, Elizabeth City, Warwick River, Warrosquyoake, Charles River, and Accomack. Lieutenants are added to the monthly court structure "to take care of the warr against Indians."
1641
Because monthly courts are being held without its officers first taking the oath of office, the General Assembly passes a bill requiring court officials to do so.
June 1642
An act of assembly changes monthly courts to county courts, concluding Virginia's twenty-year progress toward county formation.
FURTHER READING
CITE THIS ENTRY