Cotton was the wife of John Cotton, of York County. Nothing is known about the date and place of her birth, her maiden name, the date of her marriage or marriages, or whether she had any children. Historians who have identified her husband as a native of the Eastern Shore of Virginia believed that they resided in Hungars Parish, Northampton County, and had a daughter in the spring of 1660 and a son in December 1662, but no documents demonstrate that either of the Cottons had a relationship to any Eastern Shore families. The first reference to Ann Cotton in extant Virginia documents is dated November 4, 1657, when she and her husband witnessed the will of William Evans in York County, where she and her husband evidently lived from sometime before that date until after Bacon’s Rebellion. Her husband was an attorney and for a time owned a plantation on Queen’s Creek. It is evident from her narrative of the rebellion that she knew most or all of the important people in the county, including Edmund Cheesman and his wife, both prominent supporters of Nathaniel Bacon.

Unlike many other women in her time and place, Cotton was literate and educated. She corresponded with at least one friend in England, for whom she composed a highly personal narrative of the rebellion. Much of what is known about Cotton must be gleaned from that lost document, which was first published without a note on its provenance on September 12, 1804, in the Richmond Enquirer. In that source the letter was signed “An. Cotton. From Q. Creeke” and was addressed “To Mr. C. H. at Yardly in Northamptonshire.”

Cotton’s narrative, probably based on the longer account that her husband had written sometime after the end of 1676, appeared in a long letter probably addressed to Christopher Harris, whom the Cottons had known in Virginia in the 1650s. As Ann Cotton’s letter indicates, Harris had requested information about the rebellion, possibly a copy of her husband’s narrative, which for reasons she did not state Harris could not obtain. In order to satisfy Harris’s curiosity, she prepared a short version of her husband’s narrative and added a good many parenthetical references addressed to Harris to remind him of some of the people to whom she referred. If Harris knew of and requested a copy of John Cotton’s narrative, or even if Harris and Ann Cotton had exchanged letters after the conclusion of the rebellion, she could not have composed her narrative before the latter part of 1677.

Like the Cottons, Harris would have known many of the major figures in the rebellion. His wife was a stepdaughter of Nathaniel Bacon (ca. 1620–1692), who resided in York County and was a member of the Council and supporter of the governor against the rebellion that his namesake kinsman led. In her narrative, Cotton referred to the elder Bacon as “your late wives father-in-law.” Harris and his wife had sold some land to him in 1661 and apparently departed for England soon afterward. Evidently the Cotton and Harris families had kept in touch, for she referred to previous correspondence: “as hath by a former letter bin hinted to you” and “hinted in my former Letter.”

Cotton’s narrative style, like the longer work by her husband, is laced with parenthetical remarks, but many of hers are addressed specifically to Harris. A reference to Colonel John Washington is followed by the aside, “(him whom you have somtimes seene at your Howse).” After naming several members of the governor’s Council, she reminded her reader that they were “all persons, with whom you have bin formerly acquainted.” Naming some of the rebels who were executed in 1676 and 1677, she mentioned “James Wilson (once your servant)” and Henry Page “(one that my Husband bought of Mr. Lee, when he kep store at your howse).” 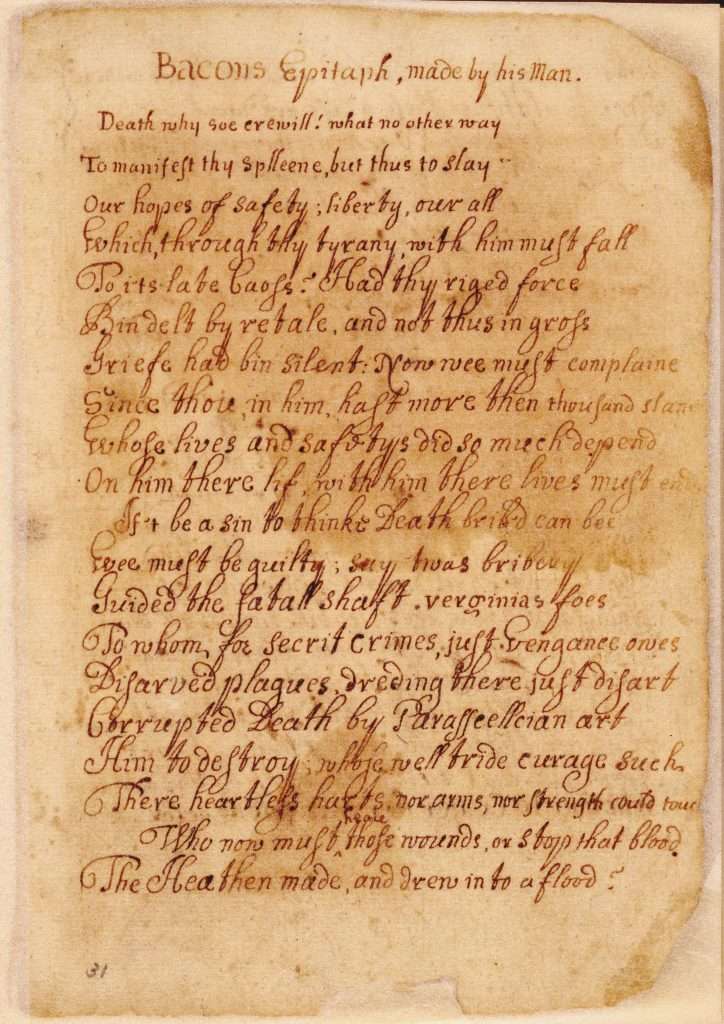 Bacon’s Epitaph, made by his Man

When Cotton’s account was published in 1804, the printer noted that John Cotton had written to his wife from Jamestown on June 9, 1676, recounting one of the dramatic events at the opening of the rebellion. The whereabouts of that document and the original of Ann Cotton’s letter are not known. Relying on the 1804 newspaper text, Peter Force reprinted Cotton’s letter in 1836 in the first volume of Tracts and Other Papers, Relating Principally to the Origin, Settlement, and Progress of the Colonies in North America and there gave it the title by which it is usually known, “An Account of Our Late Troubles in Virginia. Written in 1676, By Mrs. An. Cotton, of Q. Creeke.” Because her letter was one of the first personal accounts of Bacon’s Rebellion to be published and was included in Force’s influential Tracts, Cotton became well known as an early American author, even though her life remains largely a mystery. The time and place of Cotton’s death and the place of her burial are not recorded.

RELATED CONTENT
Categories:
Type:
MAP
TIMELINE
November 4, 1657
John Cotton and his wife, Ann, witness the will of William Evans in York County.
June 9, 1676
John Cotton writes his wife, Ann, a letter from Jamestown recounting one of the dramatic events at the opening of Bacon's Rebellion.
September 12, 1804
A narrative of Bacon's Rebellion written by Ann Cotton sometime late in 1677 or later is published for the first time in the Richmond Enquirer.
1836
Peter Force reprints Ann Cotton's letter recounting many of the events of Bacon's Rebellion in the first volume of Tracts and Other Papers, Relating Principally to the Origin, Settlement, and Progress of the Colonies in North America.
FURTHER READING
CITE THIS ENTRY