Frank Graham Cootes was born on April 6, 1879, in Staunton and was the son of Benjamin Franklin “Frank” Cootes and Mary Elizabeth Newton Cootes. Called Graham to distinguish him from his father, he was known professionally as F. Graham Cootes. He was educated in the Staunton public schools and at a local academy, where he won a scholarship to Washington and Lee University. He attended during the academic year of 1896–1897, but that autumn enrolled at the University of Virginia. During his final year he was art editor of the university’s yearbook Corks and Curls, to which he contributed his own sketches.

Cootes graduated from the University of Virginia in 1901 with both a BA and an MA He intended to study abroad for a doctorate in philosophy and then enter the teaching profession, but his experience at the yearbook was so rewarding that he decided instead to pursue a career as an artist. With the financial assistance of his older brother, in 1902 he enrolled in the New York School of Art (later Parsons The New School for Design). Established in 1896 by William Merritt Chase, the school was noted for the rigor of its curriculum and its excellent faculty, including Robert Henri, later the leader of the Ashcan School of Art. In 1903 Cootes was joined by another Virginian, Walter J. Biggs, who later enjoyed a distinguished career as an artist, as would fellow alumni George Bellows, Rockwell Kent, and Edward Hopper. 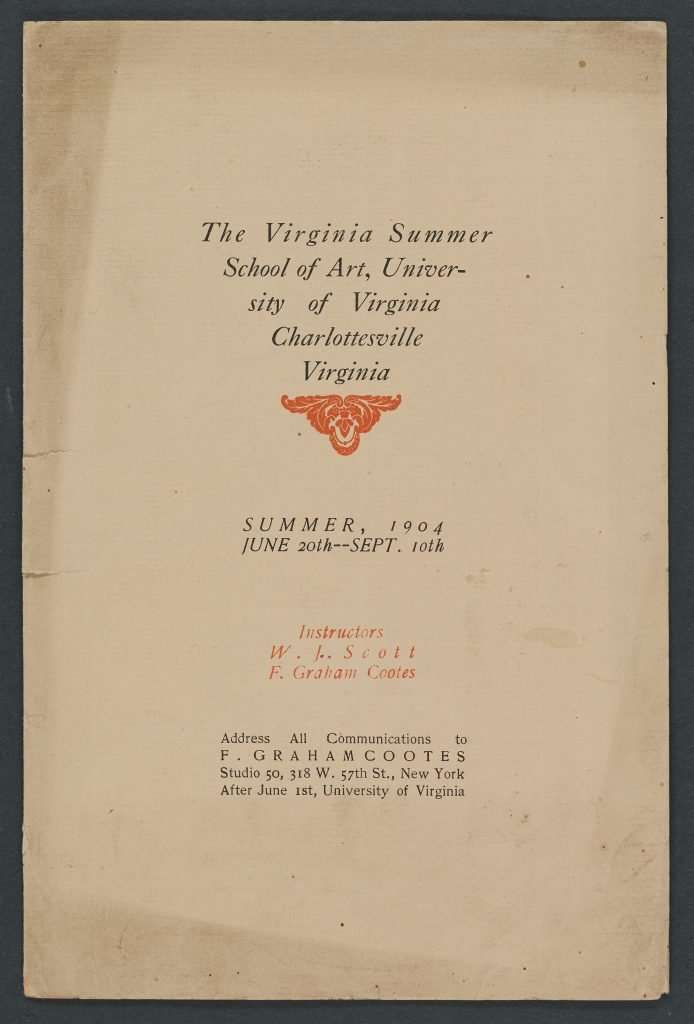 The Virginia Summer School of Art

Having completed his course work, Cootes joined the ranks of young artists struggling to establish themselves with publishing houses. He was still drawn to the classroom, however, and persuaded officials at the University of Virginia to provide him with a teaching venue. Retaining his Manhattan studio, in 1904 he opened the Virginia Summer School of Art. Each summer through 1907 he served as a class instructor and director of a program that featured courses in drawing, painting, illustration, composition, and design. He also prevailed on his artist friends to assist in instructing his students.

By the spring of 1906 Cootes had taken a studio on Broadway at what was later known as the Lincoln Arcade Building, a popular gathering place for artists. Leaving the summer school in the care of another instructor, Cootes began his career in earnest. In 1907 he illustrated what may have been his first novel, The Shepherd of the Hills, by Harold Bell Wright. It was the first of several collaborations with the popular novelist, and his illustrations appeared in Wright’s best-selling The Winning of Barbara Worth (1911), as well as Their Yesterdays (1912), and The Eyes of the World (1914). He also illustrated Ian Hay’s A Safety Match (1911).

In 1908 Cootes’s drawings were included with those of several artists destined for fame, among them Howard Chandler Christy, in A Book of Sweethearts, which contained idealized portraits of feminine beauty intended to appeal to the public’s appetite for the stylish images popularized by Charles Dana Gibson’s famed Gibson Girl. Cootes illustrated The Explorer (1909), an early novel by W. Somerset Maugham, and in 1909 his drawings appeared in a new edition of John Fox Jr.‘s Crittenden: A Kentucky Story of Love and War. By 1919 his work had appeared in at least eighteen additional novels. 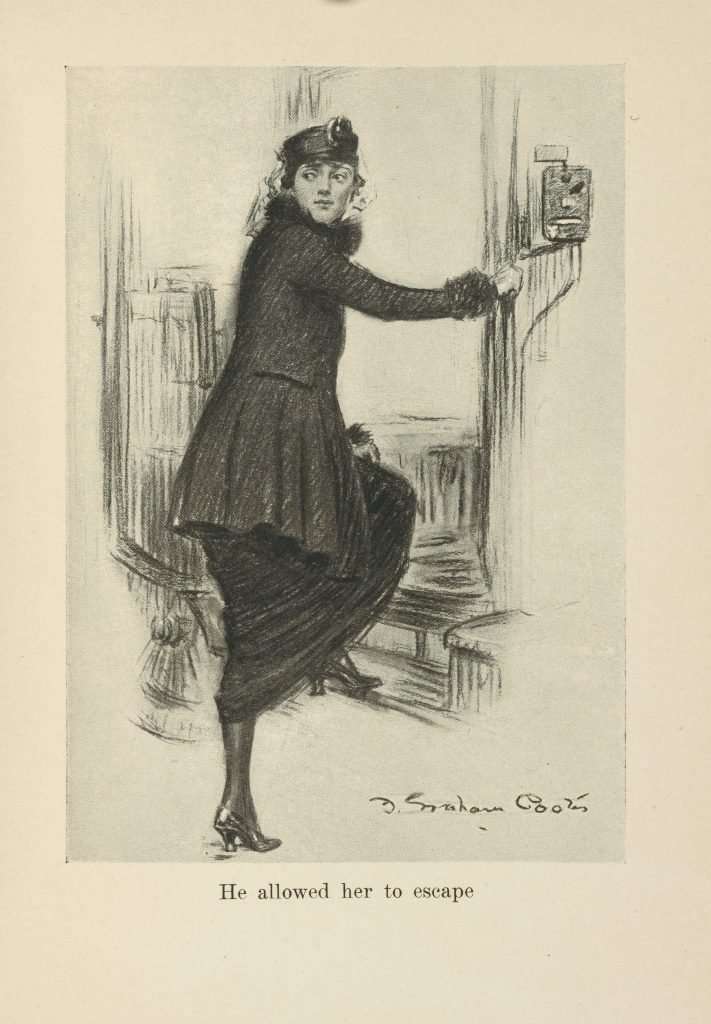 He allowed her to escape

Cootes’s drawings attracted the art editors of the country’s most popular periodicals, and some of his early works were selected for magazine covers. An image composed of gouache and pastel adorned a cover of Pictorial Review in 1907. The following year a painting appeared on the September 19 cover of the Saturday Evening Post, and two more covers followed during the next four years. In 1910, the same year that he joined the Society of Illustrators, Vogue used one of his drawings for its August 15 cover. Some of his assignments for short fiction included a November 1909 illustration in Scribner’s Magazine for a story by Richard Harding Davis, and his work accompanied seven more stories in the venerable publication between 1910 and 1915.

His artwork for short stories appeared often in Harper’s Bazaar, Ladies’ Home Journal, Woman’s Home Companion, Harper’s Monthly Magazine, and McClure’s, for which he illustrated a seven-part serial and a three-part tale by Virginia-born writer, Willa Cather. In 1918, he illustrated stories in McCall’s Magazine by Juliet Wilbor Tompkins, a popular writer for whom he had illustrated a novel in 1909. One of his paintings appeared on the November 1916 cover of Southern Woman’s Magazine, which also featured a biographical portrait of the artist. Cootes was sometimes employed as a commercial artist, composing attractive advertisements for Arrow Collar and for Woodbury Facial Soap. 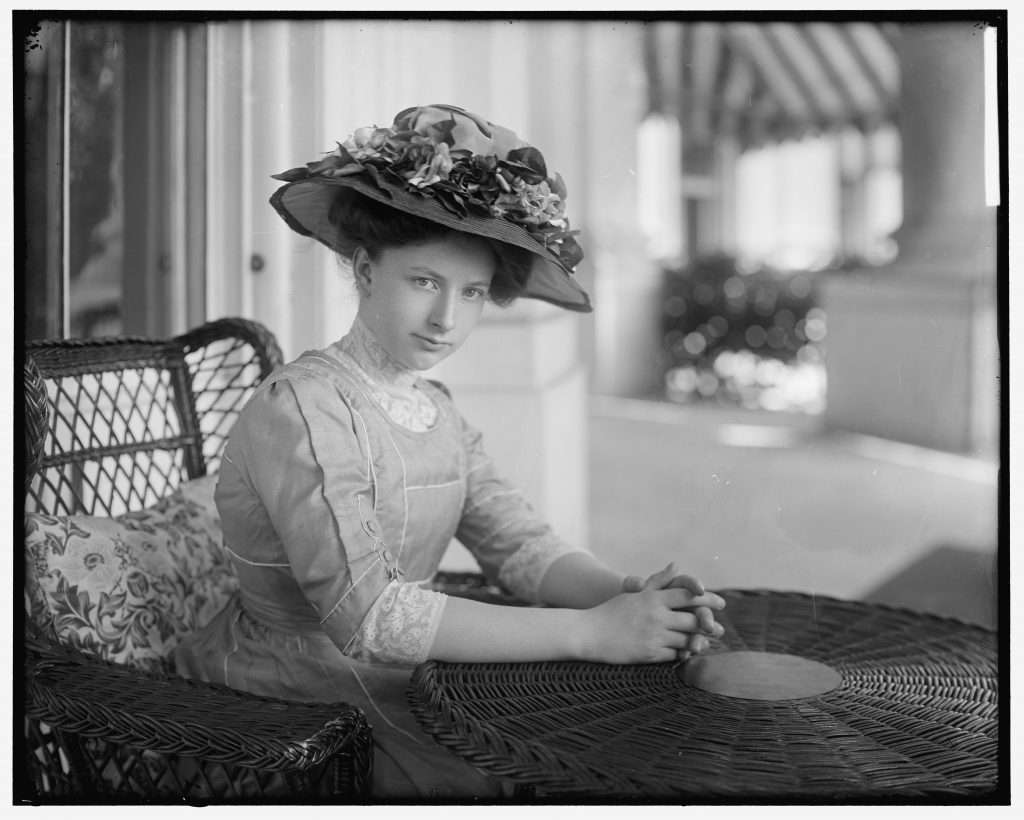 On July 17, 1912, Cootes married Adele Garland Sibley, of New York, and the couple toured several European countries on their honeymoon. By this time Cootes had established himself as a portraitist, and the American Art News noted his success and recognition in the field. His clientele included prominent figures in New York and Washington, D.C., among them Helen Taft, daughter of former president William Howard Taft. By 1917, Cootes and his wife were living at West 67th Street in an area famed as an artist’s colony, including some of the country’s most famous illustrators.

Cootes enjoyed a comfortable life and, feeling less inclined to meet the deadlines imposed by editors, he reportedly all but gave up working as an illustrator during the 1920s. When the stock market crashed at the end of the decade much of his and his wife’s wealth was lost, and during the 1930s he emerged from semi-retirement to resume working as a portraitist, employing oil and pastels. Friends from Staunton visited him at his New York studio, socially or to sit for him. He also worked from photographs, and an agent in Charlottesville arranged commissions for portraits of local residents. 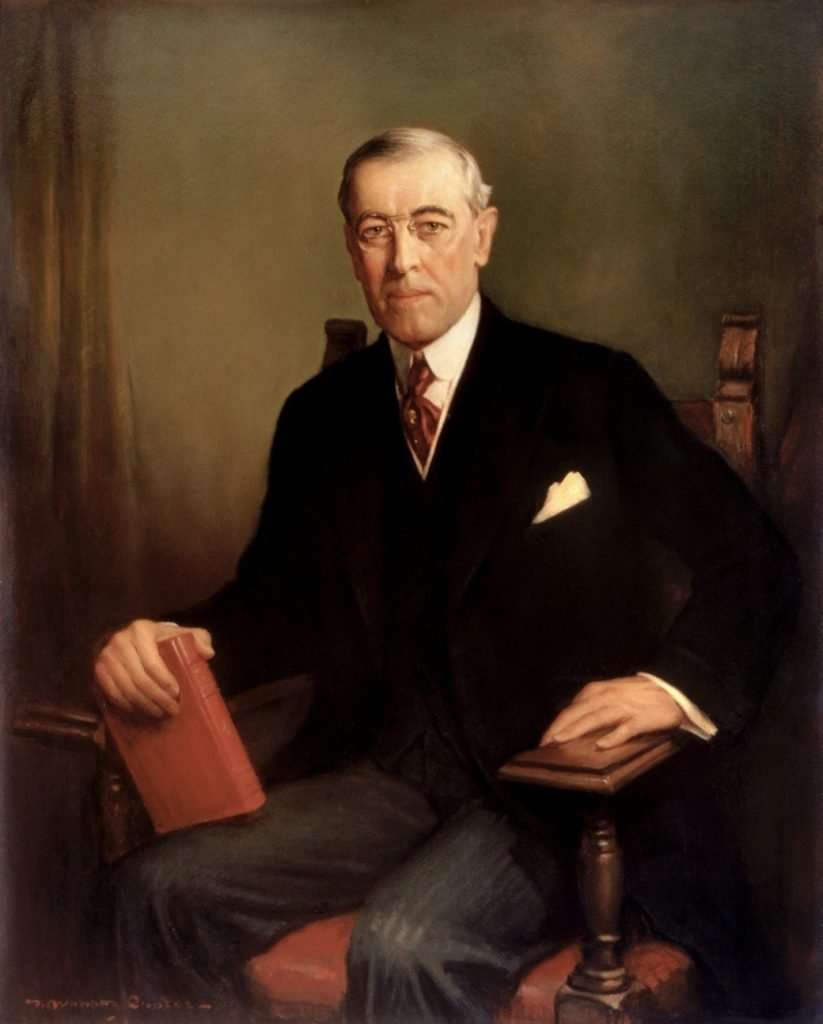 Cootes is best known for his posthumous portrait of Woodrow Wilson. Commissioned by the president’s widow, Edith Bolling Galt Wilson, Cootes composed the official portrait that hangs at the White House. He created at least two replicas: one originally located at the New York headquarters of the Woodrow Wilson Foundation and moved to the Fellowship of Woodrow Wilson Scholars at Princeton University; another, preserved at the Woodrow Wilson Presidential Library and Museum, in Staunton, was unveiled at Wilson’s birthplace in a 1935 ceremony. The Woodrow Wilson 7-cent stamp issued in 1956 is based on the official portrait, as is the bronze tablet of Wilson presented by the state of Virginia and installed in October 1958 on the façade of the Palais de Chaillot on Avenue du Président Wilson in Paris. Cootes created portraits of other notable Virginians, including Robert Carter Jett, first bishop of the Episcopal Diocese of Southwestern Virginia, and Governor James Hubert Price.

Although Cootes lived all of his adult life in New York City, he retained his Virginia roots, joining by 1905 the New York Southern Society, and by 1915 serving on the executive committee of the Society of Virginians, of which he was governor for a term. He returned to Virginia and the region of his youth whenever his schedule permitted, and he and his wife regularly frequented a Bath County resort.

Cootes was taken ill at his Park Avenue home and, after a brief illness, died at a New York hospital on November 30, 1960. He was buried at Green-Wood Cemetery, in Brooklyn. At the time of his death his paintings were held in private collections and public repositories, including the Liberty Memorial (later National World War I Museum at Liberty Memorial), in Kansas City, the University of Delaware, and the University of Virginia, which owns more than twenty of his original works of art.