Cooper was born on November 28, 1881, in Cleveland, Ohio, and was the daughter of William Irving and Katherine Harris Irving. Her mother’s family, who had secured their freedom before the Civil War, arrived in Ohio from North Carolina in the 1850s. Nothing is known of Esther Irving’s education. She began working for Harry Clay Smith, the first African American member of the Ohio legislature and editor of the Cleveland Gazette. Early in the 1910s, in Louisville, Kentucky, she assisted Nannie Helen Burroughs, then corresponding secretary of the Woman’s Convention Auxiliary of the National Baptist Convention, in raising funds for Burroughs’s recently opened National Training School for Women and Girls (later the National Trade and Professional School for Women and Girls), located in Washington, D.C. 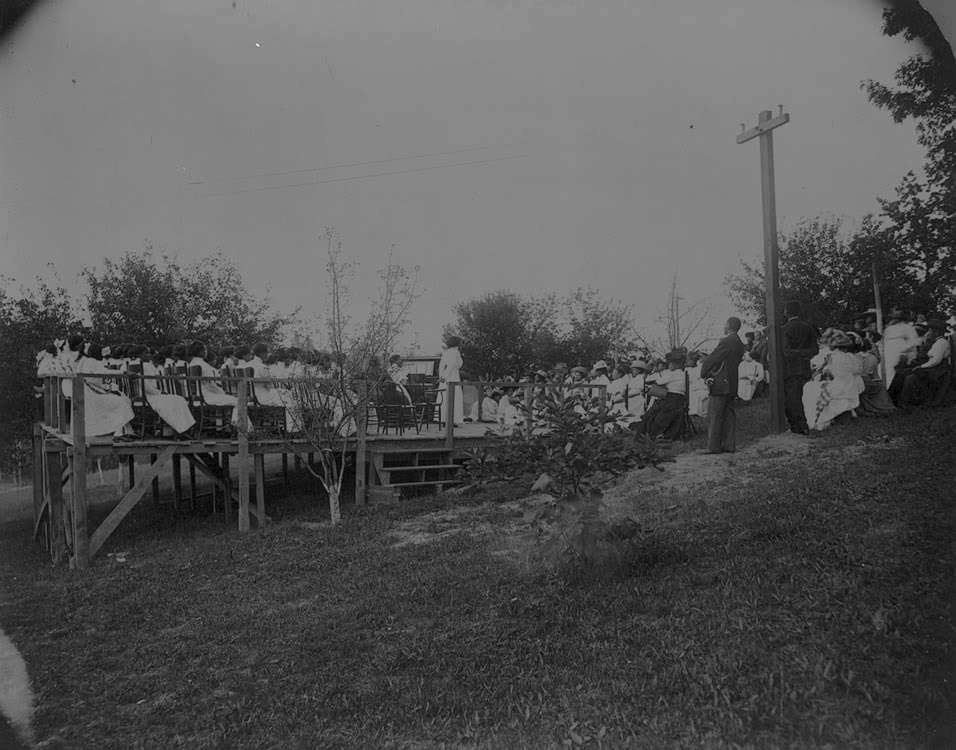 Commencement Exercises for the National Training School for Women and Girls

After moving to Washington in 1913 to work as a stenographer in the Forest Service of the U.S. Department of Agriculture, Irving met George Posea Cooper, a Tennessee native and veteran of the Philippine Insurrection then serving as a technical sergeant in the Quartermaster Corps at Fort Myer in Alexandria County (after 1920 Arlington County). They married on September 10, 1913, and had three daughters. The family highly valued books and education and according to one daughter acquired an encyclopedia set before they had electricity or indoor plumbing. Cooper resigned from government service in the mid-1920s, but she continued part-time work teaching classes in English, shorthand, and typing at the National Training School for Women and Girls. In 1934 and 1935 she conducted business classes in the adult education program of the Arlington County Public Schools as part of the Federal Education Rehabilitation Act. After her husband died on October 23, 1937, she sought unsuccessfully to regain full-time government employment.

Cooper devoted much of her time to improving educational opportunities for African American children. Dissatisfied with the inferior facilities and textbooks offered in the black schools in Arlington County, she sent her own daughters to Washington, D.C., for their secondary education. They lived with an uncle during the week and returned home to Arlington for weekends. Cooper joined the Kemper School Parent-Teacher Association and served as its president for several years. As secretary of the education committee of the Hoffman-Boston School in 1935, she began lobbying Arlington school officials to establish an accredited junior high school in the county. In 1940 Cooper organized and became first president of the Arlington County branch of the National Association for the Advancement of Colored People. Two years later she joined the executive board of the Virginia State Conference of the NAACP. In collaboration with state NAACP leaders and lawyers, the Arlington branch initiated a court case challenging inequalities in the county’s high school facilities. Their efforts culminated in Carter v. School Board of Arlington County (1950), in which the Fourth Circuit Court of Appeals ruled that the county’s separate high schools constituted unlawful racial discrimination.

As NAACP branch president during the 1940s, Cooper linked her local community to the broader statewide and national efforts to achieve voting rights and equal treatment for African Americans. She supported initiatives to abolish the poll tax and wrote letters to Arlington officials protesting segregation on public transportation and in public facilities. A member of the Southern Conference for Human Welfare, an interracial organization founded in 1938 to focus on social and economic problems in the South, Cooper served as president of the SCHW’s Arlington chapter and chaired the Eighth District Committee for Virginia. She also supported the activities of the Southern Negro Youth Congress, a civil rights group advocating improvements in education, employment, and health care for African Americans. Among the organizers of the SNYC in Richmond in 1937 were her daughter, Esther Victoria Cooper, an editor of Freedomways from 1961 to 1985, and her future son-in-law, James Edward Jackson, later a prominent Communist Party activist. In 1947 Cooper ran for a seat on Arlington County’s Democratic Executive Committee, but she was one of six progressive candidates disqualified from appearing on the primary ballot for allegedly failing to comply with party regulations. She retired as president of the county NAACP branch in 1951 but remained active as its president emerita.

Cooper participated in numerous community improvement organizations. She joined Saint John’s Baptist Church in 1914 and served as president of the Baptist Young People’s Union. A charter member of Arlington County’s chapter of the Virginia Council of Church Women, she was for many years a vice president of the Lott Carey Foreign Mission Society. During the mid-1940s she lobbied on behalf of the Citizens Committee for School Improvement. Cooper helped organize the Jennie Dean Community Center Association, a women’s group that raised money to purchase land for a recreation center open to African Americans. The association acquired several lots and in 1947 donated them to the Veterans Memorial Branch of the Young Men’s Christian Association. As secretary of the Butler Holmes Citizens Association, Cooper registered voters and sought to end the poll tax as a prerequisite for voting. She continued working on political campaigns and at polling places through the 1964 presidential election.

Cooper suffered cardiac arrest and died at her Arlington County home on February 7, 1970. She was buried next to her husband’s grave in Arlington National Cemetery.