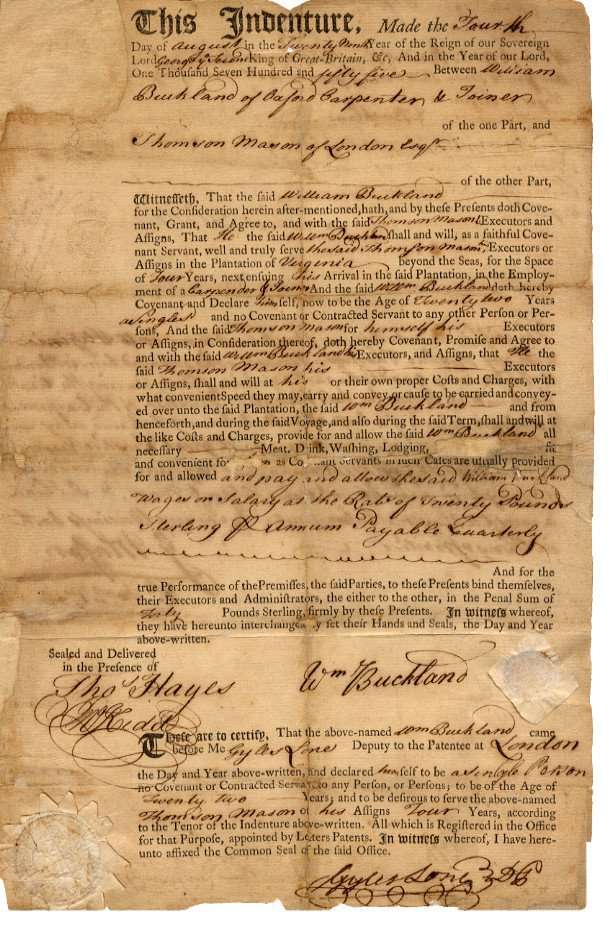 This Indenture, Made the Fourth Day of August in the Twenty ninth Year of the Reign of our Sovereign Lord George the Second King of Great-Britain, &c, And in the Year of our Lord, One Thousand Seven Hundred and fifty five Between William Buckland of Baford Carpenter & Joiner of the one Part, and Thomson Mason of London Esq. of the other Part, Witnesseth, That the said William Buckland for the Consideration herein after-mentioned, hath, and by these Presents doth Covenant, Grant, and Agree to, and with the said Thomson Mason Executors and Assigns, That He the said William Buckland shall and will, as a faithful Covenant Servant, well and truly serve the said Thomson Mason, his Executors and assigns in the Plantation of Virginia beyond the Seas, for the Space of Four Years, next ensuing his Arrival in the said Plantation, in the Employment of a Carpenter & Joiner. And the said William Buckland doth hereby Covenant and Declare him self, now to be the Age of Twenty two Years Single and no Covenant or Contracted Servant to any other Person or Persons, And the said Thomson Mason for himself his Executors or Assigns, in Consideration thereof, doth hereby Covenant, Promise and Agree to and with the said Harvey his howse together with him, the said Capt Harvie (william mutch not beinge at home) sent for him to speake with him, and when he came, Capt Harvey desired mutch to deliver him the Covenants formerly drawne, To which he replyed, first lett me see my Corne, Capt Harvey told him he scorned to kepe back his Corne, mutch replyed againe he would have his corne before he should see them, Then Capt Harvie told him he was an idle knave, and that he could find in his hart to Cudgell his Coate, To which mutch answered scornefully, alas Sir it is not in you, whereupon Capt Harvie strooke over the pate with his Trunchione, And he saith further that mutch did give other provokinge speeches,

The humble Petition of Jane Dickenson Widdowe (1624) The Mistreatment of Servant Charetie Dallen (1649) The Duties of Servants and Masters; an excerpt from The Whole Duty of Man (1658) A Black Indentured Servant Sues for His Freedom (1675) An Attack on the Mistress Elizabeth Bowen (1679)