Conrad was born on August 1, 1837, in Fairfax Court House and was the son of Nelson Conrad and Lavinia M. Thomas Conrad. He attended Fairfax Academy and Dickinson College, which awarded him a bachelor’s degree in 1857 and a master’s degree in 1860. Conrad became a lay Methodist preacher and taught at a private school in Georgetown, District of Columbia, before establishing the Georgetown Institute, a boys’ school there.

After the Civil War began, Conrad made no effort to conceal his Confederate sympathies, which had attracted the attention of United States government authorities even before the institute’s commencement exercise in June 1862, when his students made fiery pro-Confederate speeches, and he ordered the band to play “Dixie,” to uproarious applause. On August 2 he was arrested on charges of communicating with the enemy and recruiting students for the Confederate army. Conrad was locked up in Old Capitol Prison and later paroled pending exchange. Many years afterward he wrote that during that time he plotted to assassinate the former commanding general of the United States Army, Winfield Scott, whom he considered a traitor to his native Virginia, but that Confederate officials refused to allow him to proceed.

Conrad provided Confederates with information on Union general George B. McClellan‘s Army of the Potomac in 1862 during the Peninsula Campaign. On October 16, 1863, Conrad became chaplain of the 3rd Virginia Cavalry, with the rank of captain dating from September 30 of that year, but he was repeatedly detached on espionage assignments. According to his later accounts, he returned to Washington at least six times and set up a secret line of communication through southern Maryland into Virginia. Conrad received a personal letter of thanks from Confederate president Jefferson Davis in May 1864 for the valuable intelligence he had provided on Union general Ambrose E. Burnside‘s corps during the Overland Campaign and, in particular, the Battle of the Wilderness. Arrested that year in southern Maryland, Conrad was imprisoned at Point Lookout, where he feigned illness and then escaped. Late in 1864 he and two associates schemed to kidnap U.S. president Abraham Lincoln and hold him for political ransom, a plan they abandoned as impractical because the president traveled with an armed cavalry escort. Conrad wrote to Davis in January 1865 stating that he wished to resign his chaplaincy and devote himself to the Confederate secret service. After Lincoln was assassinated in April 1865, Conrad was arrested and threatened by an angry crowd because he resembled the assassin John Wilkes Booth. Released, Conrad was arrested again in Virginia, but he leaped from a moving train and fled to the mountains until the postassassination furor had passed.

On October 4, 1866, Conrad married Emma T. Ball, of King George County. They had three daughters and four sons, one of whom died in childhood. From 1866 to 1868 Conrad taught at Upperville Academy, in Fauquier County, and from then until 1871 at Rockville Academy in Maryland. In the latter year he became principal of the Preston and Olin Institute, a Methodist boys’ school in Blacksburg. When that school was absorbed in 1872 into the new Virginia Agricultural and Mechanical College, Conrad unsuccessfully sought its presidency. He then became editor of the weekly Montgomery Messenger, in which he criticized the management of the college and supported the Readjusters, a new, biracial political party that advocated increasing public support for education and reducing the principal and interest rate to be paid on the antebellum state debt. Conrad wrote frequently to William Mahone, the Readjuster leader, offering political advice and reporting on political events in southwestern Virginia. Conrad became a professor of English at the college in 1877 and after the Readjusters gained control of the General Assembly was appointed president in February 1882.

Described as the most colorful and controversial president in the first century of the school, Conrad made significant, lasting changes. The college began awarding bachelor’s degrees for literary and scientific studies as well as in civil and mining engineering. He organized the college into four academic departments (agricultural, business, literary and scientific, and mechanical), converted the school to summer instead of winter vacations, significantly increased spending on the library, made the school’s farming operation financially successful for the first time, and continued to reorganize its military program in the pattern of Virginia Military Institute’s. Conrad became a Republican after Mahone joined that party. He was criticized for continuing his political activity, and after the Readjusters lost control of the state government, he was dismissed as president effective June 30, 1886.

One of Conrad’s sons died while attending Virginia Agricultural and Mechanical College during Conrad’s tenure as president. For three months in 1882 and one month in 1887 Conrad served as mayor of Blacksburg. In August 1887 he moved to Maryland to teach at Maryland Agricultural College (now the University of Maryland at College Park), and then about 1890 he moved to Washington, D.C., to become a statistician for the United States census. A few years later Conrad bought a farm near Dumfries, in Prince William County, to which he retired. 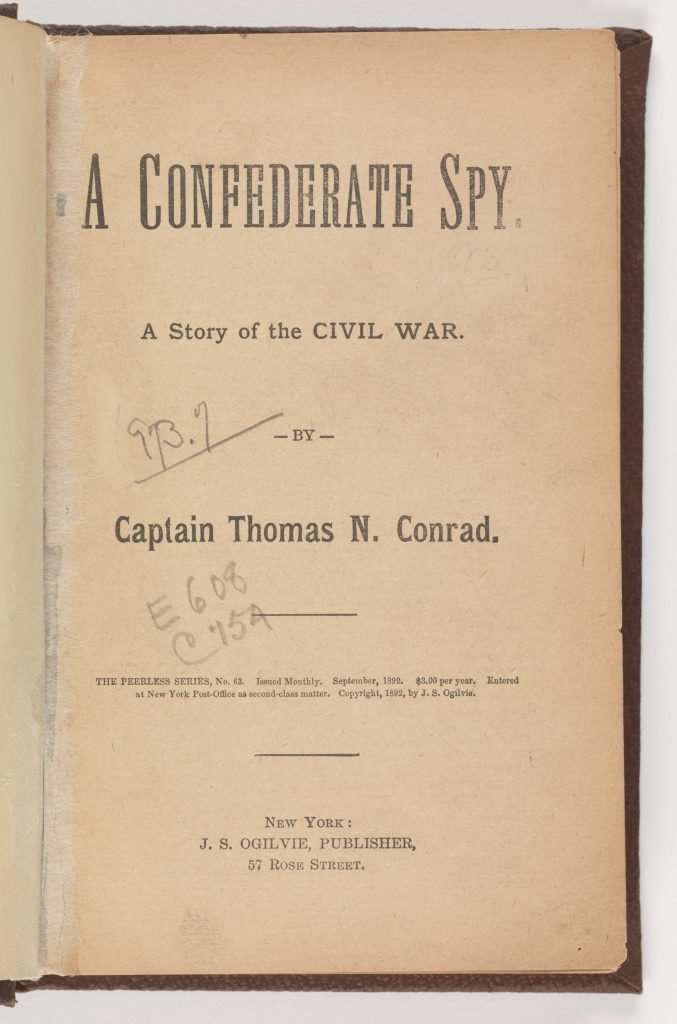 A Confederate Spy: A Story of the Civil War

In 1892 Conrad published a ghostwritten reminiscence of his espionage exploits, A Confederate Spy: A Story of the Civil War, based on articles he had written for a Philadelphia newspaper in May 1887. He also published a revised edition entitled The Rebel Scout: A Thrilling History of Scouting Life in the Southern Army (1904). His wife died in 1900, and Conrad died on January 5, 1905, in Washington, probably at his son’s residence, of what was described as acute indigestion. He was buried in the Westview Cemetery in Blacksburg. The Virginia Tech Corps of Cadets honored him in 1972 by naming its new equestrian military team first Conrad’s Troopers and then the Conrad Cavalry.